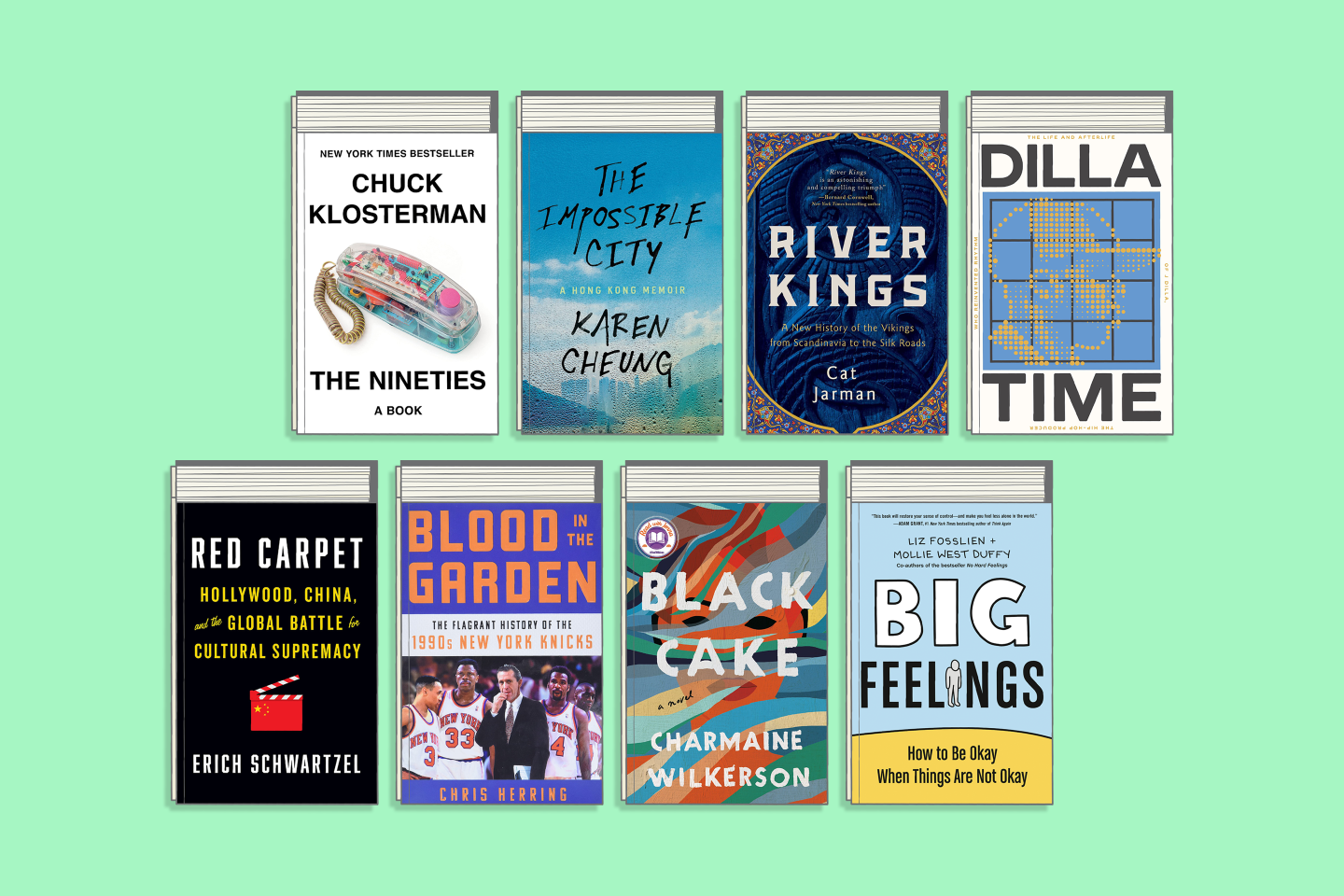 Here are some of the best books already published in 2022 to date, as read and nominated by the staff of Fortune, in no particular order.
Courtesy of Random House; Pegasus Books; MCD; Penguin Press; Atria Books; Ballantine Books; Portfolio

Summer reading season is well underway, and the publishing industry typically saves the most anticipated releases of the year for fall. But there have been plenty of bestsellers and must-reads already released in fiction and nonfiction this year.

“Juicy, compelling stories of love and relationships are all the rage right now. We think of them as rom-coms with unique twists,” says Al Woodworth, senior editor of Amazon Books, where she is part of the Amazon Books editorial team that compiles the retail giant’s own Best Books of the Month and Best Books of the Year lists. “There’s so much going on in the world right now that’s challenging; these books are heartfelt, genuine, and about people striving for their hopes and dreams. You know that when you pass them on to a friend, they’re going to love it.”

Woodworth cites popular novelists Colleen Hoover, Taylor Jenkins Reid, and Emily Henry—all of whom have new releases this year—as “having a moment” in this waning time of the pandemic when most people are going out again, but maybe their pandemic-induced reading habits are holding steady.

“I think people are always looking for good stories, and this won’t change,” says Sarah Gelman, editorial director of Amazon Books, where she oversees the Amazon Books editorial team and recently launched her own book club on Amazon called Sarah Selects. “During the pandemic, we saw readers getting excited about books that were adapted for the screen, and this trend has continued with recent adaptations such as Conversations With Friends by Sally Rooney or Station Eleven by Emily St. John Mandel.”

From a nonfiction perspective, Woodworth notes, “so many readers are looking to understand this pandemic moment, with books like Bessel van der Kolk’s The Body Keeps the Score: Brain, Mind, and Body in the Healing of Trauma, which has been on the Amazon Charts bestseller list for 81 weeks (which was first published in 2014).”

Here are some of the best books already published in 2022 to date, as read and nominated by the staff of Fortune, in no particular order.

‘Big Feelings: How to Be Okay When Things Are Not Okay’ by Mollie West Duffy and Liz Fosslien
Courtesy of Portfolio

Big Feelings: How to Be Okay When Things Are Not Okay by Mollie West Duffy and Liz Fosslien

This isn’t any ordinary self-help book. This book epitomizes when a book feels like a friend who truly understands you. Following up the droll but sincere workplace guide No Hard Feelings: The Secret Power of Embracing Emotions at Work, Big Feelings is the appropriate mid-pandemic sequel. Addressing feelings we don’t often like to talk about—let alone share in the social media age when everyone puts their “best” selves only on Instagram—authors Mollie West Duffy and Liz Fosslien fully explore grief, despair, and resentment, and how even these dark feelings can be productive. (Productive doesn’t always have to mean work output; it can also just be about getting to a better state with your mental health. The writers fully admit the irony of writing a book essentially about burnout while suffering burnout themselves.) —Rachel King, editor

At the heart of this engrossing multigenerational family drama is the person who so often holds everything together: the matriarch. And her adult children’s issues are palpable from page one as the siblings reunite in person for the first time in eight years since the sister (Benny) departed after feeling rejected by her family’s reaction to her coming out, which is given greater attention and nuance throughout the book. But their mother’s will-reading is eye-opening, as it is for any child who knows little to nothing about their parents’ lives before they were born. Eleanor, their mother, leaves behind an eight-hour recording, revealing a life and immigration journey from the Caribbean in the 1960s to the U.K. to the U.S., involving numerous personal traumas and secrets (including parental abandonment, false identities, and accusations of murder). Eleanor also leaves behind a frozen black cake, a traditional rum-soaked dessert made from a treasured family recipe, which she used to bake for her children. Yes, how the cake is made is explained repeatedly throughout the book (and Wilkerson’s brilliant descriptions are positively sumptuous for the mind’s eye), but it’s also an allegory for life, love, and tribulations. —R.K.

The Impossible City: A Hong Kong Memoir by Karen Cheung

There is probably no one book that can explain all of Hong Kong’s complexity, but Karen Cheung comes pretty close. The Impossible City tells Cheung’s story as she grows up, goes to school, and becomes a writer and journalist—and in doing so, paints a picture of the city that goes deeper than the headlines. The Impossible City is a must-read for those who want to know what makes the city so interesting, so complicated—and so misunderstood. —Nicholas Gordon, associate editor

‘There Are No Accidents: The Deadly Rise of Injury and Disaster—Who Profits and Who Pays the Price’ by Jessie Singer
Courtesy of Simon & Schuster

There Are No Accidents: The Deadly Rise of Injury and Disaster—Who Profits and Who Pays the Price by Jessie Singer

This is a thorough, compelling book by a journalist tracking the skyrocketing rate of “accidental deaths” in the U.S. over the past century. Singer deftly shows how all deaths deemed “accidental” are actually the product of corporate greed, power, and decades of bad policy—while poor people and non-white people bear the brunt of both violence and blame. I haven’t looked at news stories on traffic accidents, opioid overdoses, or oil spills the same way since. —Jane Thier, reporter

The Wall Street Journal’s Hollywood reporter reveals how dependent on China Hollywood became—and how China learned not to need blockbusters conceived in L.A. anymore. By the time the book ends, Hollywood is just like the tech sector. China has learned how to make its own megahits, and American fare designed to perform big in China, like Marvel’s Shang-Chi, isn’t even allowed to be shown. —Nick Lichtenberg, executive news editor

‘River Kings: A New History of the Vikings from Scandinavia to the Silk Roads’ by Cat Jarman
Courtesy of Pegasus Books

River Kings: A New History of the Vikings from Scandinavia to the Silk Roads by Cat Jarman

Vikings have been having a moment for about a decade. There’s the Thor movies from Marvel, a History Channel series, and lately the prestige slasher flick The Northman. If you want a short, masterful account of the reality, this book by an archeologist takes you from northern England to eastern Russia to the Middle East and—if you haven’t been paying attention—redraws your map of European history. If you are into Vikings anyway, you’ll still love it for the beauty of the writing. It also explains just who the “Rus” were that gave their name to Vladimir Putin’s nation-state, and why Ukraine is such a foundational part of eastern European history. —N.L.

‘Blood in the Garden’ by Chris Herring
Courtesy of Atria Books

The Nineties by Chuck Klosterman, Dilla Time by Dan Charnas, Blood in the Garden by Chris Herring

The 2020s are shaping up as the decade when every Gen Xer is old enough to write about the subjects that dominated their childhood and early adulthood in the 1990s. First there’s Chuck Klosterman, the essayist whose 2003 collection, Sex, Drugs, and Cocoa Puffs, was a dorm-room must-have. He summons back in his inimitable fashion the strange mix of apathy, boredom, and cynicism that feels like much longer than 30-odd years ago. Then there’s music journalist Dan Charnas diving into the legendary Detroit hip-hop scene and the savant producer Jay Dilla, the man who paved the way for Eminem and Kanye West but didn’t live to see it. Finally, for any fan of HBO’s Winning Time, there’s a sports epic starring Pat Riley taking place in Midtown Manhattan, when the New York Knicks brought a physicality to basketball that hasn’t been seen since. There’s one unforgettable anecdote of Riley plunging his head into an ice bucket. —N.L.

‘Also a Poet: Frank O’Hara, My Father, and Me’ by Ada Calhoun
Courtesy of Grove Press

Also a Poet: Frank O’Hara, My Father, and Me by Ada Calhoun

This memoir details the relationship between a journalist, her art critic father, and the famous poet who has captivated them both throughout their creative lives. What starts as the author’s desire to finish a project her father never could turns into a meditation on the meaning of family, art, and love. And like Patti Smith’s Just Kids, it brings back to life a New York City many of us have longed to experience—and helped me fall back in love with the city we inhabit now. —Alicia Adamczyk, senior writer