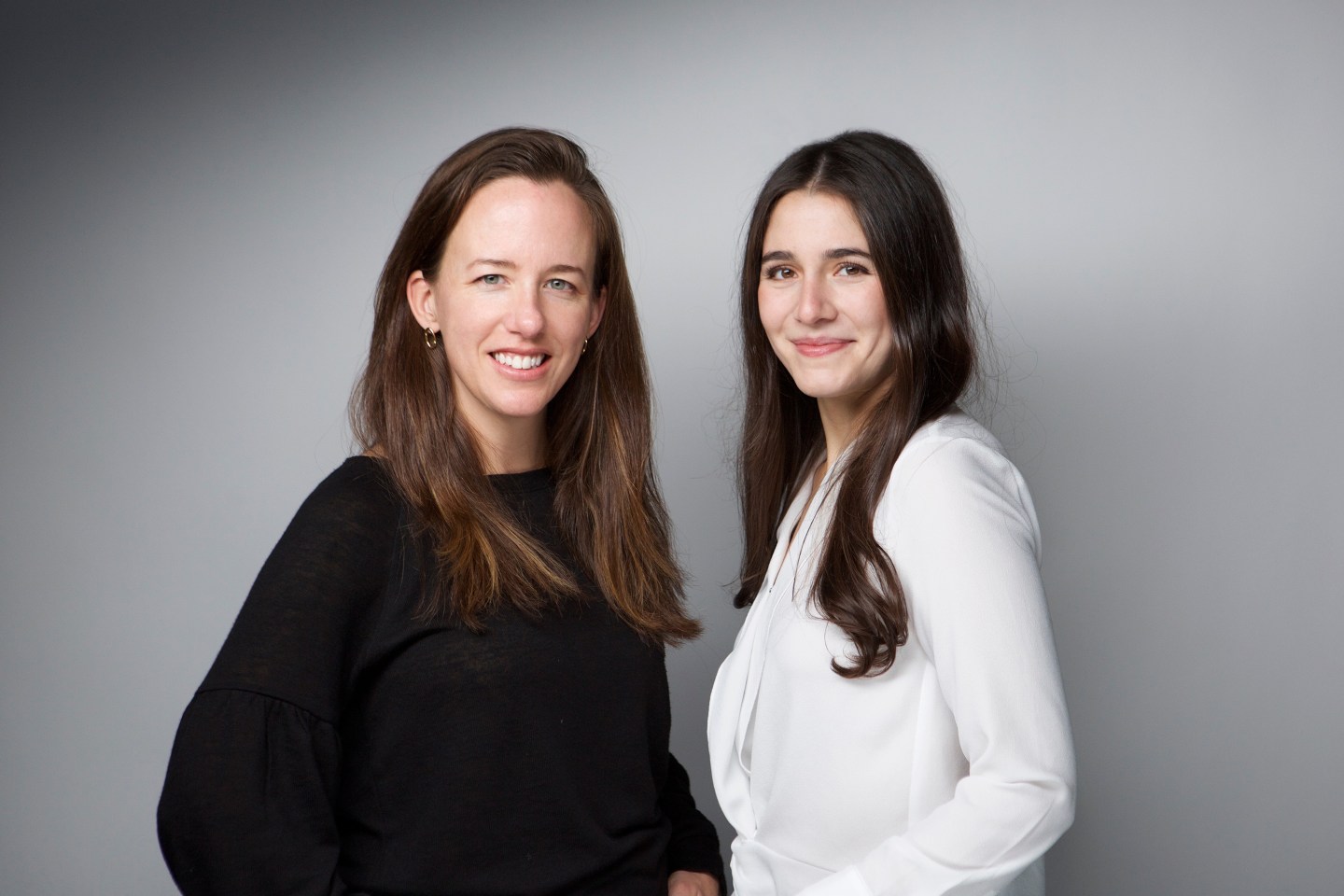 Good morning, Broadsheet readers! Primary elections are happening in seven states tonight, a breast cancer treatment drug may reduce tumor growth for twice as long as chemotherapy, and compliance training is a big business. Have a lovely Tuesday.

– Staying compliant. Compliance trainings, such as sexual harassment refreshers or cybersecurity trainings, typically occur in bursts and are not part of employees’ or managers’ daily to-dos. Roxanne Petraeus and Anne Solmssen have spent the last three years trying to change that.

The duo in 2019 founded Ethena, a compliance training platform that just closed a $30 million Series B round, Fortune is the first to report. The funding round was led by an individual—former Stripe exec Lachy Groom—rather than a firm. Other executives, including Front CEO Mathilde Collin and Robinhood COO Gretchen Howard, participated in the round.

Petraeus, the company’s CEO, is a former U.S. Army officer and the daughter-in-law of former CIA director and Army general David Petraeus. Her experience in the military was front of mind as she built the platform. “It’s not particularly controversial to say the military has struggled with sexual harassment and assault and gender inclusivity,” she reflects. “I loved my time in uniform, including serving in combat and in Afghanistan. But while there were individual soldiers and officers who did an incredible job setting the tone, the formal training was mostly a joke.”

Perhaps one of the biggest head scratchers for Petraeus was the contrast between the military’s ability to excel in highly complex and stealthy defense operations, while simultaneously floundering when it came to people operations. “The military taught me to jump out of a plane in three weeks through repetition and simulation of the environment,” she says. “It felt strange that the same organization that can train whole units to deploy to combat didn’t apply that same level of rigor to ethics and inclusion.”

Iterating on tactical military capabilities, but not other needs, communicated that some trainings were hugely important, while others were viewed as inessential, she says. Ethena’s digestible format—delivering trainings in frequent, “bite-size” increments—is predicated on those lessons. Employees at companies like Netflix, Zendesk, and Carta receive regular Slack messages, emails, and mobile-friendly notifications with company policy information and questions, often based on their schedules and tasks. Ethena is building for the reality that “adults learn over time” and aims to answer the question “When would the information be relevant for an employee?” (Ethena is one of a handful of companies trying to ramp up the cadence of typically once-a-year processes. Pando, a platform the Broadsheet covered in April, is doing the same for performance reviews. Both aim to provide continuous insights rather than annual reports to executives and managers.)

The company hopes to solve what Petraeus calls the “arbitrary Tuesday problem.”

“On an arbitrary Tuesday, if I tell you, ‘Don’t accept bribes from government officials,'” that might not stick with an employee, she says. But if employees are reminded of a company’s financial ethics policies directly before a conference where they’ll be meeting with officials, they’re more likely to remember the training and adhere to corporate edicts.

In business, the contrast between which trainings are deemed important and which aren’t may not be as stark as in the military. But the opportunity is just as big. After all, these compliance trainings are regulatory mandates. “Compliance is a really good business in that every company is required to do it,” Petraeus says. “They’re so important that if you can move the needle even a little bit from both a dollars and an impact sentiment, the effect is huge.”

- Election night.  Seven states are holding primary elections on Tuesday night. In California, Rep. Karen Bass is running against 11 candidates, including billionaire Rick Caruso, in the Los Angeles mayoral primary. In Iowa, former Rep. Abby Finkenauer, who lost her House seat in 2020, is competing for the Democratic nomination to take on GOP Sen. Chuck Grassley this fall. In Montana, Cora Neumann and Monica Tranel are two of three candidates vying for the Democratic nomination for Montana’s newly created second congressional district. New Mexico Gov. Michelle Lujan Grisham is favored to stay in her seat, though state Rep. Rebecca Dow is one of two GOP candidates vying to face her in November. In South Dakota, Gov. Kristi Noem is likely to win the GOP nomination against rival Steve Haugaard. New York Daily News

- Promising study. A new study of Enhertu, a breast cancer drug developed by AstraZeneca and Japan’s Daiichi Sankyo, found the drug cut the risk of tumor progression in half for patients with the most advanced form of the disease. The drug is designed to target HER2 receptors, with small doses of chemotherapy while leaving healthy tissue alone. Enhertu stopped tumor progression for an average of 9.9 months, compared to 5.1 months for chemotherapy treatments, and cut the risk of death by 36% compared to chemo. Wall Street Journal

- Political history. New York Magazine writer Rebecca Traister looks back at the rise of Sen. Dianne Feinstein and asks: "Where did it all go wrong?" Feinstein's first California electoral win at age 36 resembled the media phenomenon surrounding Rep. Alexandria Ocasio-Cortez's upset in 2018. But today Feinstein, almost 89, is urged by many to retire and seen as the embodiment of the political establishment. The Cut

- Family flexibility. YouTube CEO Susan Wojcicki announced that Google employees will have an additional three months to work from home after their family leave ends. "It felt like too much to spend the workday away from my newborn while juggling the demands of my job and parenthood," Wojcicki wrote of her own experience as a young parent. Tangentially, Google is pushing for a partial return to the office. Time

MOVERS AND SHAKERS: Jennifer Wong was appointed CEO of Aritzia; she joined the fashion brand 35 years ago as a salesperson. The Beauty Health Company has appointed Bluemercury founder Marla Beck to its board of directors. Former Drybar CEO and Taco Bell chief financial officer Liz Williams has joined upscale convenience store company Foxtrot as president and chief financial officer.

- Algorithm aspirations. Pinterest has acquired The Yes, an A.I.-powered fashion shopping service co-founded by former Stitch Fix COO Julie Bornstein. Pinterest, primarily used for photo inspiration boards, aims to use The Yes’s technology to compete with a user market that's now more drawn to creator content and highly personalized feeds. The details of the deal were not disclosed in the announcement. TechCrunch

- Renewed scrutiny. A California district attorney's race in conservative Kings County has become unexpectedly competitive following Gov. Gavin Newsom's pledge to make California a safe haven for abortion services. In 2018 and 2019, two women in the county were arrested after experiencing drug-related stillbirths. GOP candidate Sarah Hacker is running against incumbent Keith Fagundes in Tuesday’s primary election, and those cases have become a main issue in the race.  San Francisco Chronicle

- BMI barriers. While there is no national data kept on body mass index and egg freezing, many patients with larger bodies report being turned away from clinics. One patient was reportedly told to lose weight months into the process of scheduling the procedure without being told why. “This has been a real blow to their body confidence… because they feel that this option — this thing that should be available to everybody — has been taken away from them,” says Nicola Salmon, a U.K.-based fertility coach. The Cut

- Stamp of approval.  First Lady Jill Biden unveiled a new stamp honoring former First Lady Nancy Reagan on Monday. Originally intended for release in 2021, but delayed due to COVID-19, the stamp will be available on July 6 and honor her 101st birthday. Reagan is the fifth first lady to have a stamp bearing her visage, following Lady Bird Johnson in 2012. The Hill

It’s been 50 years. I am not ‘Napalm Girl’ anymore New York Times

"I think more people need to see this. It’s not because I want recognition. It’s just to shed light on what’s going on in the world."

-Justine Lindsay, on being the NFL’s first openly transgender cheerleader.