You can now put A.I. tools in the hands of all your employees. But should you? 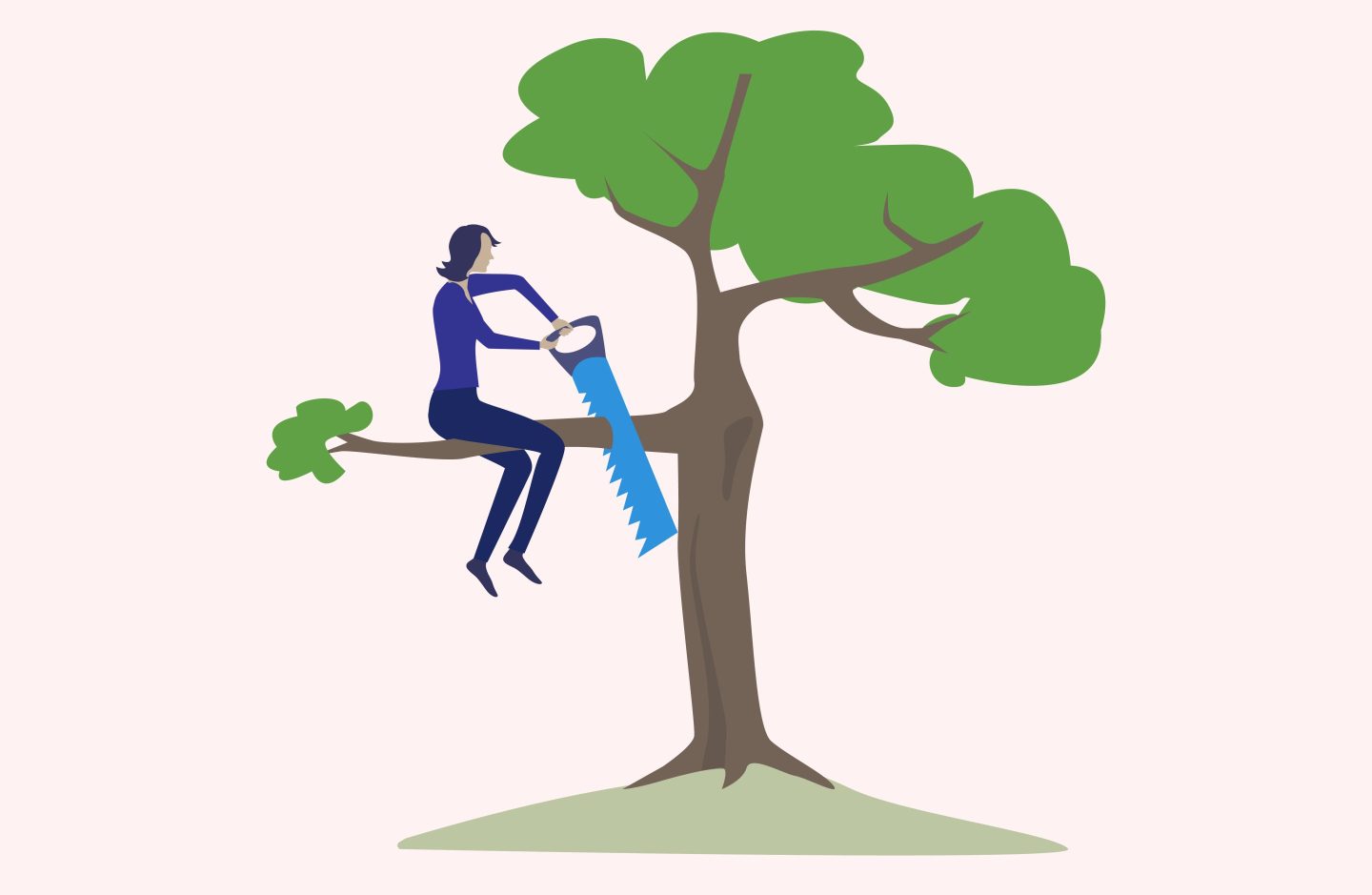 “If they’re used indiscriminately, no-code/low-code platforms for A.I. are likely to end up doing more harm than good,” the authors write.
Courtesy of Getty Images

Last year, amid the COVID-19 pandemic, three Germans, backed by a financial grant from Berlin University’s Center for Entrepreneurship, started up an online jobs marketplace. Called FiveTeams, it allows managers in Germany, Austria, and Switzerland to post résumés, specify criteria, and evaluate job offers from companies, but remain completely anonymous until they agree to an interview.

More novel than FiveTeams’ business model, though, is the way the platform was created. The entrepreneurial troika developed FiveTeams without employing an army of software programmers and developers—relying instead on no-code/low-code (NC/LC) platforms and tools. These platforms translate the fundamentals of code into graphical user interfaces (GUIs) and menus, allowing people to build A.I. applications by using a visual approach. FiveTeams used Webflow, a visual editor platform, to create its website; Algolia, a software-as-a-service engine, for the critical search function; Twilio for API-based messaging; and Stripe for payment processing.

NC/LC platforms may be helping business make A.I. accessible to more people—democratizing A.I., so to speak. They’re also multiplying business’s A.I. capabilities by giving employees, especially those that aren’t technically qualified, the power to develop A.I. solutions and applications. They’ve come in handy at a time when there’s an acute scarcity of digital talent worldwide. Moreover, not only can companies develop algorithms faster with NC/LC platforms, but they can do so at lower costs.

However, NC/LC platforms pose some challenges and have some limitations, such as scale, scope, and security. In fact, if they’re used indiscriminately, NC/LC platforms are likely to end up doing more harm than good. As Sean O’Brien, an academic at Yale Law School and the founder of Yale’s Privacy Lab, recently warned, “Low code can be like fast food: delivered quickly and in bright packaging, but bad for you, your community, and your ecosystem.” That’s why we’re convinced that before rolling out NC/LC platforms, business leaders should anticipate these key challenges:

“No code” doesn’t mean “no training.” Asking employees to use NC/LC tools to develop A.I. applications is akin to inviting amateurs to drive race cars. It won’t be easy. “We tried to have the business develop the [low-code platform] workflows, and it failed miserably. Essentially, all these [NC/LC] tools still require pretty serious knowledge,” says one developer at a medium-size company, who was deputized to push their adoption. Employees must be able to understand the principles of A.I., the data, the computing resources, and the specific application, as well as the associated risks, to competently use off-the-shelf platforms.

They will deliver efficiency rather than customization. The A.I.-generated forecasts built with NC/LC tools aren’t as granular as they could be, and the solutions aren’t entirely customized. Executives have to ask themselves at every turn whether using NC/LC tools to develop A.I. applications could limit the performance of critical processes. For instance, a retail bank we worked with recently migrated to a NC/LC platform, but when we tried to improve its customized marketing-offers engine with the aid of advanced A.I. techniques, the bank found that its platform wouldn’t support them.

They will add more opacity than transparency to A.I. Using NC/LC A.I. tools results in the creation of a black box inside a black box. That adds a fresh layer of anxiety, making it tougher for people to understand how A.I. works and will evolve, and posing a stiffer challenge for companies to gain a social license for A.I. Last year, Nitzan Mekel-Bobrov, eBay’s chief A.I. officer, warned: “We have to be very careful [as we put NC/LC tools into the hands of developers] because we need to understand what’s being put into production in front of our customers, and as you scale that up, you need all of the instrumentation in place to be able to continuously monitor.”

How leaders should look at no code/low code

As NC/LC tools gain traction, they are bound to democratize A.I.’s use. But, as in democracy, ensuring that A.I. attains its full potential requires vision and governance as well as informed and empowered citizen programmers. Leaders must learn how to deploy these tools optimally, so they can make the most of them while reducing the risks of doing so. Three starting points:

Identify where using NC/LC tools will create value. Companies must develop clarity about where they can profitably use NC/LC platforms and tools. The pioneers are using them to accelerate the development of use cases, lower implementation costs, and upskill employees, but they don’t use them to build critical processes and capabilities. For instance, it made business sense for the bank we mentioned earlier to use image recognition software, embedded in a NC/LC library, to automate document analysis, but not to use those tools to build a credit risk model that was meant to be a differentiator.

Prepare your workforce for the tools. Business leaders, especially chief human resources officers, must carefully plan the rollout of NC/LC platforms rather than treating them as an extension of the tools that IT functions use. The first step must be to define who should have access to the tools. Should only developers be allowed to use them? Or should they be made available to a number of nontechnical employees, so the organization can benefit from cultural change and collective innovation? Should the tools be accessible to only tech enthusiasts, to avoid a backlash? Or should they be shared with non–digital-native employees as well, to ensure A.I.’s widespread adoption?

Once those issues are settled, the HR function should include NC/LC tool skills in its training programs. Two kinds of training may be necessary: One to help employees understand the algorithm, machine learning, and data-mining principles, as well as the associated risks, behind the interfaces; and another in the form of workshops to ensure that employees master the use of the NC/LC platforms. For example, Levi Strauss has created an in-house curriculum that consists of A.I. literacy courses on coding and design thinking, as well as eight-week full-time—and all-paid—bootcamps, where nontechnical employees from its business units can develop A.I.-related skills to augment their current roles.

Foster trust and experimentation. Business leaders, especially CTOs and CDOs, must design safe spaces for experimentation with NC/LC tools. Every organization should design a digital sandbox, where employees can test NC/LC tools without the risk of anything going wrong—as IBM has done—and monitor them to ensure that employees feel confident about experimenting with A.I.

The IT function must learn to incorporate the use of the tools in its interfaces with other functions. For instance, IT will have to work with procurement to integrate its requirements about the explainability of NC/LC tools in contracting processes. Doing so will force NC/LC tool-providers—such as DataRobot, which recently integrated a prediction explanation tool in its products—to build more secure platforms. Similarly, IT must support the risk and compliance function, which must learn to create certification processes for NC/LC platforms. For instance, two years ago, the pharmaceutical giant Merck insisted on putting NC/LC platform Dataiku through its rigorous compliance process, involving its advances analytics team, before it would use the platform to develop more A.I. applications.

Undoubtedly, NC/LC tools are ushering in a new era of A.I. Companies should deploy them as far as possible to make A.I. accessible to everyone even as they mitigate the challenges associated with their use. Since NC/LC tools aren’t going to be a panacea for A.I. deployment, experimenting with them to learn why, when, and how to use them will be critical for success.

Gabriel Nahas is a senior data scientist at BCG Gamma and ambassador at the BCG Henderson Institute.