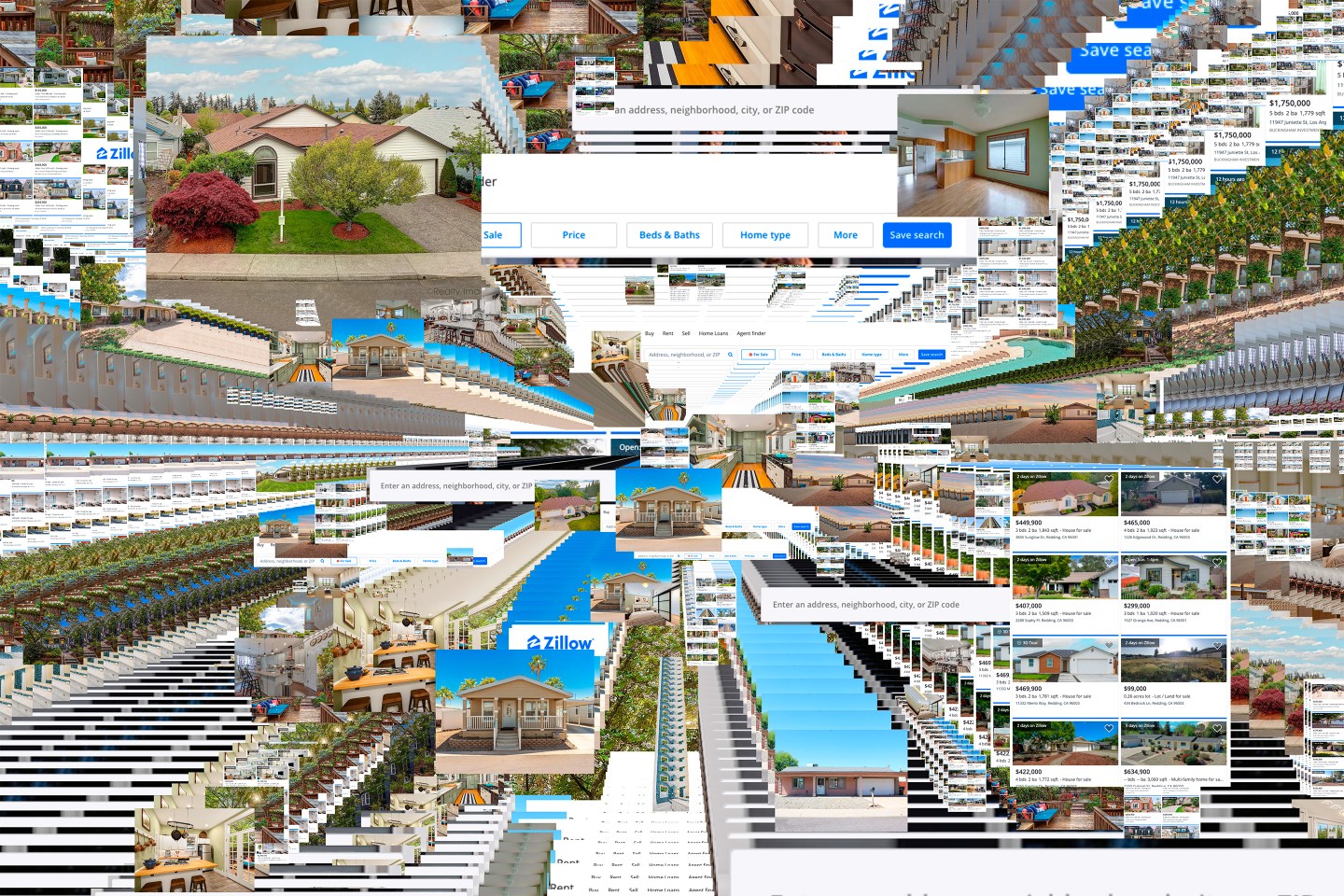 More than six months after its home flipping operation suffered a very public, very expensive meltdown, Zillow is going back to basics.
Illustration by Adam Ferriss

Is there a better symbol of America’s real estate obsession than Zillow? As the U.S. home market rocketed into the stratosphere in the wake of the pandemic, buyers, sellers—and plenty of lookie-loos—have flocked to its site and app; Zillow is now averaging more than 200 million users a month, roughly double the number of people checking the latest scores on ESPN.com. The Zillow phenomenon even made a recent appearance on Saturday Night Live, where cast members drooled over listings they had no intention of buying and a sultry voice cooed, “Need a new fantasy? Then you need Zillow.”

But for all the attention, the real force keeping Zillow’s business going isn’t those window-shoppers, or even the ones actually looking to buy—it’s the Leslie Turners.

Turner is a Zillow Premier Agent, meaning she pays the company for the contact information interested buyers submit through the site. In 2018, one of those Zillow leads connected her with a couple looking for a second home in Charleston, S.C., where Turner is a broker at Maison Real Estate. With her help, the buyers landed a $335,000 cottage that ticked all their boxes. Two years later they reached out to Turner to help sell the cottage ($373,000), buy an investment property nearby ($450,000), and splurge on a permanent residence in the heart of downtown ($845,000). That’s four major sales—all from that one little lead.

It’s a part of business. You’re going to take some big swings. Some work out, some don’t.

Zillow leads aren’t a perfect solution for agents like Turner. She says she pays Zillow about $250,000 per year for the information, and credits it for just 12% of her sales. But Zillow’s ubiquity and scale provide her local boutique agency with something otherwise out of its reach. “It’s branding and marketing awareness,” she says. “When you’re looking for a home on Zillow in downtown Charleston, you’re seeing us.”

This aspect of Zillow’s business has never been the sexiest part of what it does. After all, lead generation has been around for decades, going back to telemarketers and even door-to-door salesmen. But its financials might get you going: In 2021, the division that includes lead gen was the company’s second largest—and the only profitable portion of its balance sheet.

What was the biggest piece of the revenue pie? Well, that’s something quite different: the company’s home-flipping business, which blew up in spectacular fashion last year. In November, Zillow announced it was shutting down the effort—known as Zillow Offers—laying off 2,000 workers and scrambling to off-load its remaining homes. But a year of selling vast numbers of houses had already juiced the company’s revenue to $8.1 billion in 2021, up from $3.3 billion the previous year. That was enough to boost Zillow onto the Fortune 500 for the first time in its history, but far from good news for its future: Even on that massive influx, the company lost $528 million in the midst of one of the hottest real estate markets the country has ever seen.

The path to Zillow’s home-flipping debacle began innocently enough, with small-scale pilot programs in Phoenix and Las Vegas in 2018. The company, which got its start in 2006 when it launched its home price estimator tool, Zestimate, thought its algorithm could suss out a home’s current worth and predict how it would change in the future. The plan was to identify properties that are quickly appreciating and have motivated sellers willing to pay Zillow’s 5% to 9% service fee; buy the homes; and flip them at a profit.

While Zillow hasn’t shared details of how it fared in Phoenix and Vegas, the results clearly fired up founder and CEO Rich Barton. He announced plans to expand and told investors he expected Zillow Offers to bring in up to $20 billion in annual revenue within three to five years. Reflecting on the business now, Jeremy Wacksman, Zillow’s COO, insists the company had no choice but to go big to give Zillow Offers a shot at success: Buying and selling homes is an expensive, complicated, low-margin business that can be profitable only on a massive scale. The company needed to “automate transactions so efficiently that you can cover the fixed cost required to run that operation, which requires a lot of technology, a lot of data, a lot of automation, and, again, a lot of capital,” says Wacksman.

Not a bad theory, but doomed by a pair of issues—one beyond Zillow’s control, and the other explicitly of its own making. First came the pandemic, which led many, including Zillow, to assume the worst; the company halved what it charged agents for leads as it hunkered down for a stagnant market. But that slowdown never came. In fact, the summer of 2020 ushered in what would become a historic boom. The red-hot market fed Zillow’s confidence, and with Zillow Offers helping drive a record $52 million profit in the first quarter of 2021, the company threw its house buying into overdrive.

That’s where the wheels started to come off. By spring of 2021, the market had overheated to a point where Zillow’s much-lauded algorithm, the backbone of its home-flipping strategy, was struggling to make accurate pricing predictions. Believing its own inflated numbers, say analysts, the company began overpaying for homes all across the country.

One such home was a Midwestern two-story house located in Union Township, outside Cincinnati. Public records and real estate databases tell the story in miniature: The owners listed it for $338,500 in the summer of 2021. Zillow bought it for $350,000 and almost immediately relisted it for $366,000. Even in a booming market, no one bit. After three months, Zillow sold the property for $329,000—a loss that doesn’t include closing or carrying costs.

Zillow’s trigger-happy algorithm didn’t hurt just the company: As Zillow paid top dollar for homes across the country, it likely helped to bid up prices amid a stretch that we now know to be the hottest in the U.S. housing market’s tabulated history. It was also competing against—and often beating out—people looking for a place to live; the company has said it targeted homes priced between $200,000 and $400,000, a range often favored by first-time buyers. (Zillow disputes that it was in competition with buyers, saying it resold homes quickly and that the majority of houses it purchased were not yet listed for sale.) It’s unlikely that Zillow alone moved the macro housing environment, but it was part of a larger wave of private investors whose turbocharged buying undoubtedly impacted home values during the pandemic. In January, investors made up 33% of U.S. home sales, the largest share since John Burns Real Estate Consulting started tracking the data in 2012.

Zillow executives are blasé about the failures of its algorithm, the loss of millions of dollars, and the implosion of Zillow Offers. “It’s a part of business. You’re going to take some big swings. Some work out, some don’t,” says Zillow president Susan Daimler.

Far from soul searching, the company is already on to what it sees as the next big thing—something it calls “a housing super app.” Despite the hyperbolic name, this app actually seems very much like a return to Zillow’s core business, serving the needs of agents and homeowners.

Even while it focused on scooping up homes, Zillow continued the track record of major acquisitions it started with StreetEasy in 2013 ($50 million) and Trulia in 2015 ($2.5 billion). In 2018, it bought Mortgage Lenders of America for $65 million and began to dip its toe into lending. In 2021, Zillow completed a $500 million purchase of ShowingTime, a site real estate agents use to schedule home viewings. These purchases, as well as the fact that Zillow also started offering options like title, closing, and escrow services for homebuyers, position the company to begin putting together what John Campbell, an analyst with Stephens, calls a “mosaic” of all things real estate, many of which will likely end up on its super app. “Anything that you have to do to get out of home A and into home B is in [Zillow’s] purview,” says Campbell. He’d like to see the company get even more aggressive and branch into things like moving help.

For all the services it offers and brand awareness it’s built, Zillow believes it has yet to live up to its potential—and it may have a point. Of the 6 million or so people who bought a home in the U.S. last year, about 4 million visited zillow.com at some point in the process, according to the company. Roughly 1.5 million of them asked Zillow to put them in touch with a real estate agent. Yet only 3% of all U.S. home transactions in 2021 involved a buyer who was connected to an agent through Zillow. The company thinks it can double that share by 2025, taking it above $5 billion in annual revenue. And why stop there, asks Wacksman. “Even at 6% [of transactions], there is a long way to go; there would still be 94% that we are not participating in.”

Industry watchers are cautiously optimistic. Hitting these goals would require Zillow to expand its purview even further into real estate’s nooks and crannies, and to keep up its pace of acquisitions, says Mark Mahaney, senior managing director at Evercore ISI: “The bullish outlook would be that they can become a [real estate] platform company.”

It would help if the housing market cooperated. As Zillow’s algorithmic meltdown illustrated, predicting the future of U.S. real estate is a virtually impossible task. But with the economy cooling and mortgage rates on the rise, you don’t have to be Nostradamus to see the market eventually coming back down to earth.

In fact, things are already looking pretty maxed out: An analysis conducted this spring by Moody’s Analytics found that 96% of U.S. housing markets are “overvalued.” A housing correction would be a tough break for Zillow. Fewer buyers and sellers mean less demand for its services. Critically, that also means fewer good leads to sell to agents, and because realtors often drop out of the industry during down markets, fewer agents to buy them.

In 2010, Steve Jobs, dressed in his iconic black turtleneck, walked onstage at Apple’s Cupertino headquarters to rapturous applause. The legendary CEO was demoing the recently released iPad. The app he used for the presentation? Zillow.

At that moment, Jobs was doing what he did best: capturing our imaginations. So was Zillow. Since its founding in 2006, Zillow has been at the forefront of bringing the real estate market alive on our screens. The company’s home-flipping experiment was a step away from that mission. Perhaps its new direction will bring it back to its roots: empowering homebuyers—not competing against them.

This article appears in the June/July 2022 issue of Fortune with the headline, “Can Zillow go home again?”