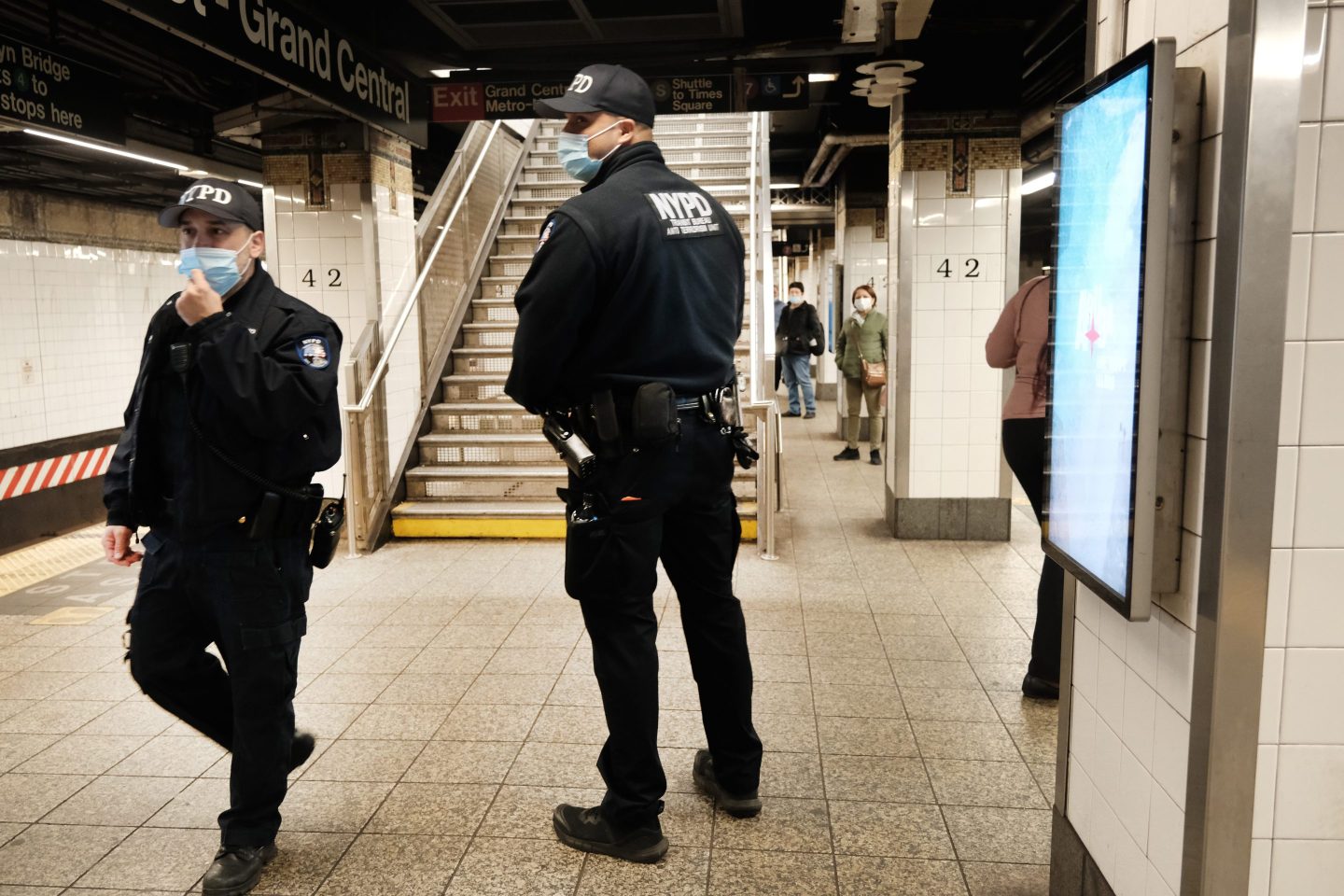 Police search for a suspect in a Times Square subway station following a call to police from riders on April 25, 2022 in New York City.
Spencer Platt—Getty Images

A shocking fatal shooting on the New York City subway this past weekend could have much bigger implications beyond the subject of inner-city crime.

Daniel Enriquez, a 48-year-old Goldman Sachs employee, was shot and killed while riding the Q train across the Manhattan Bridge into the city on Sunday morning. The attack was unprovoked, police later said.

His death is only the latest in a spate of violent and wanton crimes on the city’s public transport system over the past few months, and each one further imperils the economic future of the financial and media capital of the United States, if not the world.

On a Saturday morning in January, a stranger shoved a woman to her death into the path of an incoming train at the Times Square subway station. Last month, a random assault on an N train in Brooklyn involved gunfire and smoke grenades and left at least 29 people injured. That attack occurred at around 8:30 am during a Tuesday morning, what used to be commuting hours.

Subway shootings hit their highest point since the 1990s during the pandemic, and while the number of shootings so far this year have been relatively low, the subway also has a small number of passengers, with ridership this year 19% lower than city projections.

The string of subway violence is a hit to new Mayor Eric Adams’ central campaign promise to reduce crime in the city, and directly undercuts his appeals to business leaders to get workers back into the office buildings that form a huge chunk of city tax revenue.

In a statement by Goldman CEO David Solomon shared with Fortune, Solomon expressed their condolences to Enriquez’s family, and described him as “a dedicated and beloved member of the Goldman Sachs family,” who worked there for nine years. The investment bank has been urging NYC staff to return to the office five days a week for months, and has faced considerable resistance.

Goldman isn’t alone in wanting its New York employees back in the office. Both Morgan Stanley and Citibank began requesting workers to return starting in March, while Bank of America is planning on having all of its U.S. workers back in the office most of the week by June 1, as the NYC business industry attempts to kickstart a return to something resembling a pre-pandemic normal.

“Now is the time for us to get back,” Adams said at a February press conference. “I’m hoping within the next few weeks the CEOs map out a real plan of ‘this is when you need to come back.’”

More recently, Adams has even encouraged CEOs to get on the subway themselves and set an example.

“We’re telling our corporate leaders: ‘Hey, get on the train!’” Adams said in an interview with the Financial Times last week. “We need to advertise that New York is back.”

In a statement to Fortune, Adams’ office said that the NYPD was “working diligently to find the suspect in this shooting and bring him to justice,” but the mayor was not reconsidering his earlier statements on workers returning to offices.

“In addition to providing a boost to our economy, a return to in-person work will both help increase public safety,” a spokesperson said.

Many New York City workers still prefer to work remotely or under a hybrid model, as evidenced by their footprints. In a Monday note, Bank of America Research analysts found that only 38% of Manhattan office workers have returned to the office, with a full recovery forecast in the third quarter of 2024, citing the NYC Office of Management & Budget.

The OMB also expects office vacancy to climb further before peaking in 2023, while it reports 21 million square feet of office space available on the sublease market, meaning thousands of offices are sitting virtually empty, waiting for new tenants.

A recent poll by the nonprofit organization Partnership for New York City found that only 8% of Manhattan office workers were back in the office full time, five days a week. The survey found that COVID-19 case rates and workers’ opposition to returning to their offices full time were the main reason behind the holdouts. More subway violence will be just another thing keeping work something done increasingly at home instead of the office.