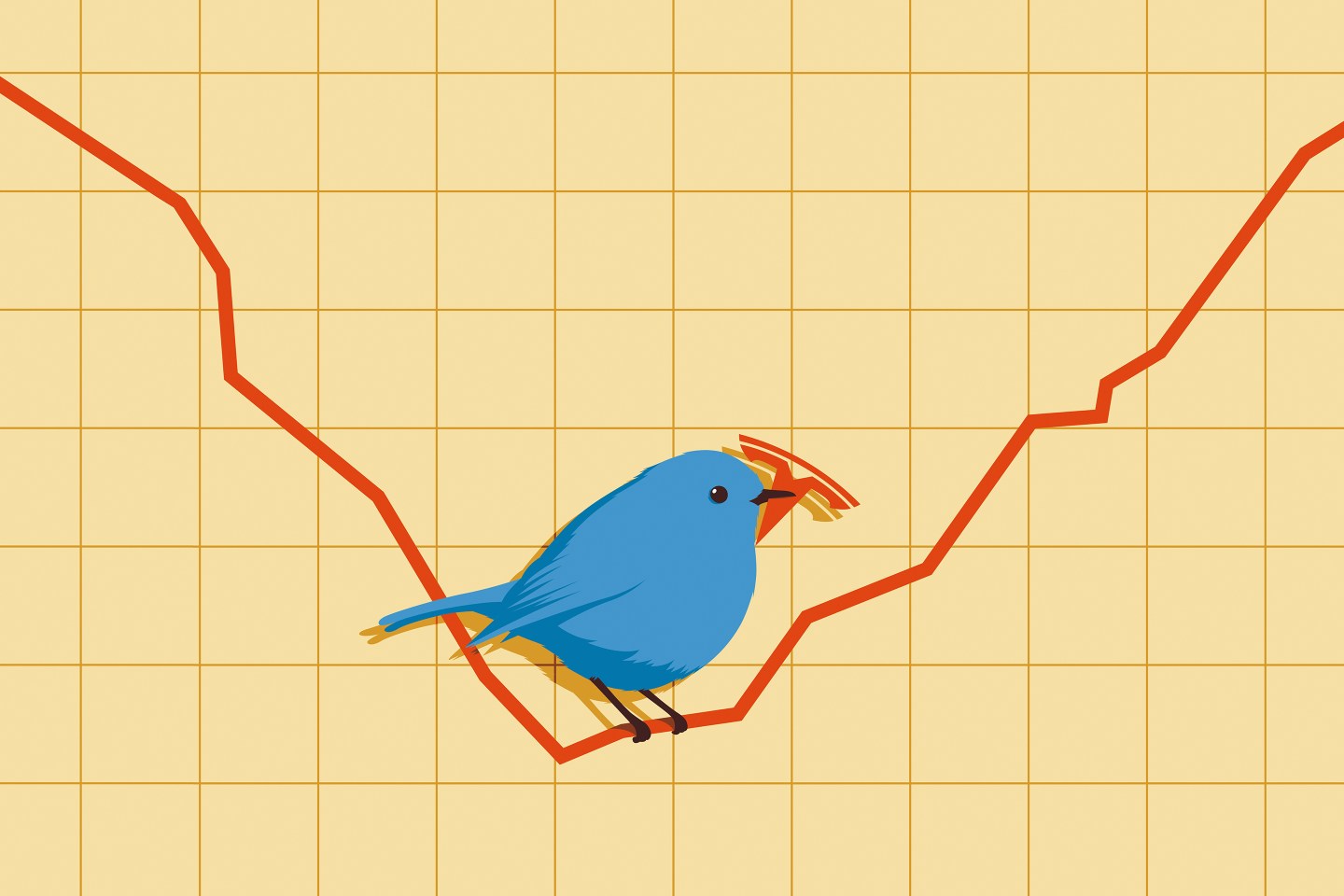 Elon Musk’s campaign to buy Twitter is a big business story that’s masking an even bigger one.

The bid has had the media buzzing about Musk’s plans for his takeover target. The mogul wants to transform the social media platform into an anything-goes town square, which might mean restoring Donald Trump’s megaphone. And pundits wonder whether the maverick can really quintuple the ailing company’s revenues in five years, as he’s been promising.

So far, Musk’s vacillating, race-then-retreat pursuit has been a disaster for Twitter’s operations and stockholders. After agreeing in April to take Twitter private at $54.20 a share, Musk began stalling a few weeks later, alleging that the number of “bots” and fake accounts on the platform was far higher than Twitter claimed. Many have seen that gambit as an effort by Musk to recast the deal at a far lower price—or even walk away entirely. That issue was unresolved as this story went to press, but by then Twitter’s management ranks were in turmoil, and its shares had cratered.

Still, despite the pummeling that Twitter has taken, the deal’s biggest losers thus far are shareholders at the company that made Musk an icon: Tesla, the electric-car juggernaut. And those investors stand to lose far more if Musk gets his wish and becomes Twitter’s principal owner and CEO.

Though none of the biggest, long-standing Tesla investors have publicly criticized Musk’s Twitter play, it’s obvious from the sharp selloff in its shares that many investors despise the deal. Between the market closes on April 1, just before Musk disclosed his initial Twitter stake, and May 20, Tesla’s stock crumbled 39%. The nosedive erased $433 billion in value, one of the largest wipeouts ever over such a short span. To frame it differently: Tesla’s market cap fell by almost 10 times the $44 billion Musk offered for Twitter.

The Twitter deal isn’t the only reason Tesla is down (the threat of recession is certainly another). But it’s easy to see why it makes shareholders squeamish. The challenge and the cost of fixing Twitter—a company with big cash-flow problems in a low-margin industry—would create a huge distraction for Musk at a time when Tesla faces major challenges of its own. Those challenges, including shutdowns at its gigafactory in Shanghai, falling market share, and burgeoning competition from new EV entrants worldwide, demand Musk’s full commitment. Suddenly, the followers whom Musk has moved to believe in Tesla are questioning how their hero could embark on a crazy crusade for another company.

Fanboys and girls aren’t the only ones with money at stake. As one of the biggest companies in the S&P 500 by market cap, at $687 billion in late May, Tesla is a staple in large-cap index funds. That makes it part of the 401(k)s and nest eggs of tens of millions of Americans. For example, as of April 30, Tesla ranked as the fifth-largest holding in the Vanguard S&P 500 ETF at 2.1%, above Berkshire Hathaway, UnitedHealth Group, and Johnson & Johnson.

Of course, Tesla’s share price tumble was arguably inevitable even without the Twitter deal. Tesla’s stock is hugely overvalued based on the sales and profits it can realistically generate in the years to come. “Musk is a genius, but also a slick operator who’s able to keep Tesla on a rocket-ship ride by using hype,” says David Trainer, chief of equity research firm New Constructs. The Twitter sideshow, whichever way it turns out, could prove the bubble-buster.

The cost of a fixer-upper. In presentations to lenders and investors, Musk has set nearly impossible goals for Twitter. Most notably, he aims to grow the user base from 217 million in 2021 to almost 1 billion by 2028. Analyst Brent Thill of Jefferies notes that no social media platform he covers—including Facebook—has ever expanded remotely that fast, and that Twitter lacks the popularity among young users to achieve rapid growth.

But the bigger problem is that growth costs money, and that cost might come at Tesla investors’ expense. To help finance the deal, Musk has already sold around 6% of his Tesla holdings, for $8.5 billion. An insider tells Fortune that the deal, if consummated, is likely to leave Musk holding over 50% of Twitter’s shares. But the deal also calls for Twitter to assume a gigantic $13 billion in new debt, costing around $650 million a year in interest.

Long story short: That interest is likely to absorb all of Twitter’s cash from operations, leaving nothing for the kind of capital expenditures that will be needed to build the tech infrastructure to support a bigger user base. If Twitter’s performance doesn’t improve, Musk will be under pressure to cover any losses or even contribute billions in new capital. And that, in turn, heightens the risk that Musk will need to sell far more Tesla shares, potentially triggering a downward cascade.

Margin-loan danger. Musk’s financing blueprint involves pledging $31.25 billion of his own Tesla stock—about 44 million shares, at current prices—to secure a $6.25 billion loan for the Twitter takeover. According to Tesla’s most recent financial disclosures, Musk has previously margined 88 million shares for other borrowings, though it’s unclear how much of that credit he’s used. Hence, if indeed he taps the $6.25 billion, he’ll have pledged in total around 80% of the Tesla shares he owns outright.

But huge margin loans for insiders pose big dangers for all shareholders. If Tesla’s share price falls steeply, for any reason—because it loses market share, say—Musk’s lenders can require more cash from him as collateral. And that in turn could force him to sell more shares, creating a death spiral for the stock. To be sure, it would take a sharp price decrease to trigger margin calls. But because Tesla’s price is so high relative to its performance—its P/E is still almost 90—the odds of such a decline are much greater than they would be for an established company with bigger, safer cash flows.

The China conundrum. Musk is counting heavily on China for sales and production of EVs to drive Tesla’s growth. Last year, sales in China accounted for around one-quarter of Tesla’s total revenues. And though shortages are hobbling his Shanghai factory, Musk is still doubling its capacity to a gigantic 1 million cars a year. So let’s say that American activists tweet negative comments about Xi Jinping’s government. Beijing could threaten to close the Shanghai plant, or stop Tesla sales within its borders, unless Musk agrees to block the troublesome messages.

“China is not a fan of free expression,” notes Howard Fischer, a former senior trial counsel for the Securities and Exchange Commission and a partner at law firm Moses & Singer. But if Musk were to acquiesce to such demands, from any undemocratic state, he could hurt Tesla’s business in other ways. “Caving to those regimes, in what he boasts is an open forum, risks alienating people into shunning Teslas,” says Fischer.

Open-platform perils. As the China example suggests, by purchasing Twitter, Musk would be entering and navigating a highly politicized sphere. He’d hazard losing natural Tesla customers. “He says he’ll put Trump back on Twitter, and the site could become a playground for right-wing trolls,” says Fischer. “People who would otherwise buy a Tesla car would get turned off and purchase a ChevyBolt or another model instead. It could be a mistake to associate your brand with ideas that 50% of Americans don’t like.”

Musk vs. the SEC. The SEC and Musk are not pals—and Musk buying Twitter could make the relationship worse. The regulator charged Musk with securities fraud over his 2018 tweets claiming that he’d secured the financing to take Tesla private. He paid a fine of $20 million and agreed to step down as the EV-maker’s chairman for three years.

Now Musk faces a lawsuit from Twitter shareholders charging that he violated securities regulations by disclosing his initial investment in the company weeks after the required date. That issue could trigger still another SEC probe. The more Musk riles up the SEC, the more probable the agency will scrutinize his statements on Tesla’s prospects. Tesla’s awesome valuation hinges in part on faith that years of giant growth lie ahead. Having the SEC constantly question the claims of its pied piper could puncture the narrative.

The Tesla bubble. When Tesla stock stood at $1,100, and the company had a $1 trillion valuation, Trainer of New Constructs ran some numbers to answer a burning question: How much would Tesla have to grow to justify that price? The conclusion: much bigger that it can realistically get. According to Trainer, Tesla would need to sell 15 million vehicles a year by 2030, up from 931,000 deliveries last year; that would mean holding 57% of the global EV market, based on sales projections from the International Energy Agency.

Back in the here and now, more competitors are establishing themselves in EVs—see our story on Ford and General Motors in this issue—and Tesla’s dominance is already slipping. Its worldwide EV market share slid from 16% in 2019 to 14% last year, and its U.S. position was 70% in 2021, down nine points in a year, according to data from New Constructs and EV-volumes.com.

What does Trainer see as a reasonable valuation for Tesla? His most optimistic forecast posits that Tesla will sell 7 million cars in 2030, capturing 27% of global deliveries (a big increase from today), at a 9% profit margin, which would equal the industry-leading numbers posted in recent years by Toyota. In that scenario, the true value of Tesla stock today is $200—barely one-quarter of its current price. “If Tesla fails to meet those expectations,” Trainer adds, “it’s worth less today.”

The bottom line: Tesla’s valuation is destined to fall big-time, whatever Musk does. He can preserve its status as the world’s most valuable—and even most important—automaker, but only if he keeps his eye on the automotive ball and scraps the Twitter lark. And a further drop in Tesla’s shares could be the jolt that persuades Musk to end his quest. After what’s arguably the fastest rise to superstardom in the annals of capitalism, he presumably doesn’t want an equally dramatic fall.

This article appears in the June/July 2022 issue of Fortune with the headline, “The big losers in Musk’s Twitter bid: Tesla investors.”