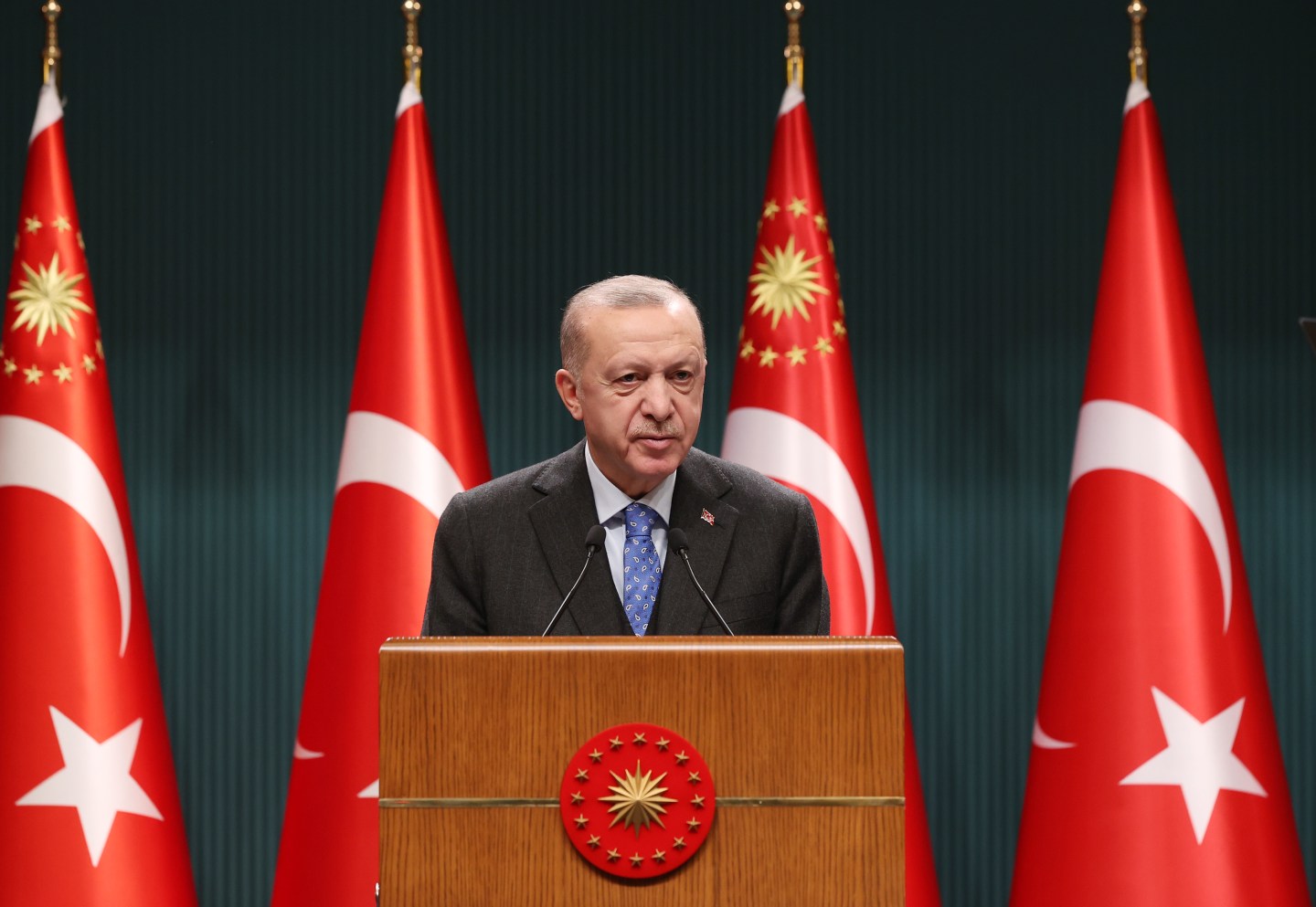 President of Turkey, Recep Tayyip Erdogan made a statement after the cabinet meeting with the agenda of Russia and Ukraine on February 28, 2022 in Ankara, Turkey.
Presidential Press Office/dia images/Getty Images

Finland and Sweden’s proposed addition to NATO would more than double the defensive organization’s borders with Russia—the country whose invasion of Ukraine prompted the Nordic applications.

President Vladimir Putin may claim to have no problem with the expansion, but it’s not like he has much choice—the faltering invasion forced the Kremlin to move troops south from the Finnish border, leaving the autocrat with little military leverage there.

However, despite Russia’s depleted state and NATO’s general desire to welcome the Nordic states into the club, the historic move would require unanimity among NATO’s 30 members.

And one longstanding member seems set to block the way: Turkey.

The first indication of serious trouble came Friday, when Turkey’s President Recep Tayyip Erdoğan said his country could not support Finland and Sweden’s applications because they are “home to many terrorist organizations.”

Erdoğan doubled down on Monday, telling Finland and Sweden not to bother sending their diplomats to Ankara to try changing his mind.

“Neither of these countries have a clear, open attitude towards terrorist organizations. How can we trust them?” he asked.

Nothing to worry about, claimed former Finnish Prime Minister Alexander Stubb in an interview with Politico Playbook: “In these types of procedures, you’re always gonna have statements and different types of national interests.”

But experts say Erdoğan’s concerns are real and deep-seated, and could plausibly hold up NATO’s expansion.

“This is not just theatrics,” said Sinan Ülgen, a former Turkish diplomat and the chairman of the Center for Economics and Foreign Policy Studies, an Istanbul think tank.

The terrorist organizations that Erdoğan is so concerned about are Kurdish, in particular the Kurdistan Workers’ Party (PKK)—a militant group that has been banned in Turkey, the U.S. and the EU for decades—and its Syrian affiliate, the People’s Protection Units (YPG).

Ankara is furious that Sweden and Finland have both repeatedly refused to extradite alleged members of the PKK—and the Gülenist movement, which Erdoğan claims was behind a failed 2016 coup against his government—to Turkey.

Turkish media reported Monday that Turkey wants to see 33 individuals repatriated from Sweden and Finland. Their names have not yet been publicized, so it is difficult to judge the merits of their specific extradition cases.

However, various countries including Sweden have in recent years refused to extradite opposition figures and even journalists to Turkey due to fears they would be persecuted or subjected to unfair trials.

Although the PKK is proscribed across Europe, the YPG has offices in Stockholm, and Turkey has long complained about the potential for PKK fundraising and recruitment there.

The Kurdish group also has offices in Berlin and Prague, and both Germany and the Czech Republic are already NATO members—but, as Ülgen noted, the current geopolitical moment “creates a different negotiating opportunity for Turkey.”

In 2019, Turkey launched a bloody offensive into north-eastern Syria, attacking the YPG and other rebel groups in part due to their PKK ties. Western countries, who have for years been working with these groups in the fight against Islamic State, were appalled, and Sweden and Finland both suspended arms sales to Turkey. Ankara wants to see these embargoes lifted before it will agree to NATO’s expansion.

Last year, Swedish foreign minister Ann Linde even went to meet with the YPG in Syria, leaving the group with a pledge for $376 million in funding.

“Turkish authorities believe they see a degree of permissiveness and leniency that is not acceptable,” said Ülgen.

According to the former diplomat, Turkey’s problem is more with Sweden than Finland, so it could well green-light Helsinki’s NATO accession “in the short term.”

“With Sweden, things are more complicated and it could take longer than what people may think right now,” he said, explaining that Erdoğan’s outrage over Stockholm’s support for the Kurds was shared across the political spectrum in Turkey.

“Turkey’s president decided to announce this [opposition to Sweden’s NATO accession] very publicly, and therefore it’s become more difficult for Turkey to concede on these demands, and for Sweden to comply with these demands,” Ülgen said. “It’s become not just a rational but also an emotional issue.”

However, Ülgen thinks the two governments will be forced to settle, because Sweden doesn’t want to be left outside NATO, and Turkey would not want to be in the position of categorically vetoing its application.

Sweden is unlikely to give way on the extradition issue, leading Swedish counter-terrorism expert Magnus Ranstorp told Fortune on Tuesday.

“It’s not going to be the case that Sweden will abandon its respect for human rights,” Ranstorp said. “Sweden won’t move on the issue of individuals who are Kurdish opposition individuals here.”

However, Ranstorp suggested, Erdoğan might be satisfied if Sweden and Finland were to resume arms sales to Turkey.

He noted that U.S. President Joe Biden will this week welcome Sweden’s Prime Minister Magdalena Andersson and Finnish President Sauli Niinistö to the White House, where they might discuss the issue—the U.S. also joined the arms embargo on Turkey in 2019.

“Hopefully, the concerns of the Turkish President Erdoğan will be solved,” said U.S. Senate Republican leader Mitch McConnell on Monday, while visiting Helsinki. “Finland and Sweden will be strengthening NATO significantly. Hopefully, this is also Erdoğan’s view.”