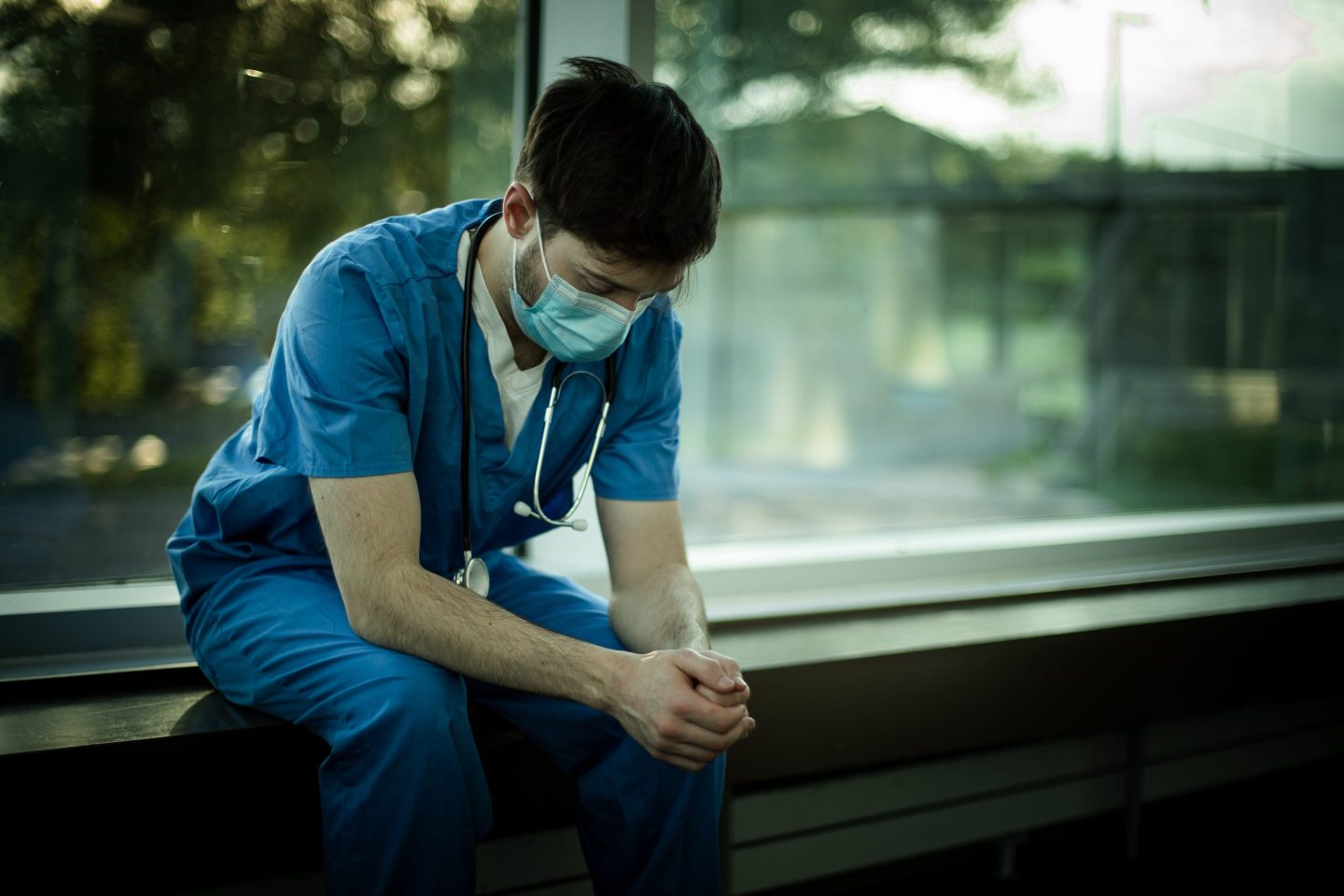 Many Americans are reevaluating their jobs and career paths following the COVID-19 pandemic.
Lightspeedshutter/Getty Images

It only took a few seconds for the idea to take hold.

While listening to the radio on his way to work one day, Sam, a nurse, was struck by a question a couple of goofy drive-time radio DJs were kicking around: If you could do anything, what would you do? One host said he’d open a cheese shop in a sleepy town in upstate New York.

“It was a joke,” says Sam, 40, who asked to be identified by his first name only to protect his job and privacy. But the idea has stuck with him for months now. He’d love to open his own little coffee or cheese shop, he says, envisioning hosting wine tastings on Saturday nights.

“I could sell my house, quit nursing, and go somewhere and just take a stab at this,” he tells Fortune. “I feel ridiculous saying that. It was a joke on the radio. It shouldn’t be my life plan.”

But there’s something to the idea of hitting a reset button, especially after the eight years he’s spent working as a nurse. He’s feeling burnt out and disillusioned about the health care industry. “I’d probably have less money, but I bet I would be happier,” Sam says.

After two years of a life-altering pandemic, it’s not just Sam who’s rethinking his goals. Americans are reevaluating their priorities when it comes to work and how it impacts their overall satisfaction. Nearly two-thirds of Americans said their idea of a happy life shifted during the pandemic, according to a new survey by The Harris Poll of more than 2,000 U.S. adults. The shift among younger workers was even more dramatic: 74% of millennials and 68% of Gen Z are reassessing their lives and goals.

“There’s a great reassessment happening,” says Libby Rodney, chief strategy officer at The Harris Poll. There’s this kind of “awakening” that Americans are having now where they’re realizing that making money is no longer the most important thing for them, she adds.

That’s showing up in trends like the Great Resignation and “rage quitting,” where workers are actively trading up for better job opportunities. But many Americans are also setting firmer boundaries around their time, demanding more flexibility from their employers, and rejecting the “always on” mentality. This includes the desire to work anywhere except an office: A survey earlier this year found that even in New York, office workers planned to reduce their time in the office by nearly half—and as of mid-April, only 8% are back in the office five days a week.

Prior to the pandemic, many Americans were in this kind of “hamster wheel” of the hustle culture and the “always on” pressure, Rodney says. But she argues things changed during the pandemic, when people finally looked up and started prioritizing themselves. “We’re seeing this massive redefinition of ambition.”

After high school, Sam attended Rutgers University for two years, but when his campus closed for a couple of days following 9/11, he just never returned because he hated his engineering classes.

He spent his early 20s working odd jobs, including at Lowe’s in the flooring department. While loading a cart for a customer, she turned to him and said ‘You should be a nurse.’ It was a “lightbulb moment,” Sam says, but it was a few years before he made the change.

In 2009, Sam went back to school to pursue his Bachelor of Science in Nursing. He knocked out his prerequisites at a local community college in New Jersey, then transferred to Drexel University and graduated in 2014.

Although he had to take out roughly $80,000 in student loans to get his BSN degree, the shift into nursing has been worth it—at least financially. As a night nurse who floats between units, Sam earns over $100,000 annually.

“One good thing about nursing is that I've had a steady paycheck. I've never missed a meal, or a mortgage or loan payment,” he says.

"I am one of the 'lucky few' who is doing well enough to pay my loans. I can't imagine graduating with this much debt and then struggling to find work," Sam says.

But while the money in nursing is pretty good, Sam says financial security alone is not enough to satisfy him at this point. He’s worried about his long-term career, especially since nursing is a very physically, emotionally, and mentally demanding job. “I can't be 50 and doing this job,” Sam says.

Three years ago, Sam started studying to become a nurse practitioner. Since his employer offers up to $8,000 in tuition reimbursement a year, he's been spacing his classes and coursework to maximize that benefit and has about a year and a half left. Though it’s slow-going, he anticipates the entire graduate diploma should cost him no more than $12,000 out-of-pocket.

But he’s still uncertain whether he really wants to continue in health care. If he becomes a nurse practitioner, “I'm going to take on a lot more additional responsibility for not much more money,” Sam says. And I question why that is.”

Overall, Sam feels like Americans don’t really value nurses. “If you're looking at salary as a measure of value, we're valued less than bankers and business people,” he says. “Nobody got into health care to be rich. But at a certain point you start to kind of feel like you've been kind of duped.”

And he’s not alone. Over half of Americans, 55%, feel they’ve been sold false promises around what would make them happy, Harris Poll found. About 70% of millennials feel deceived.

The feeling that nurses are under-appreciated really hit home during the pandemic. Sam worked in an intensive care unit—one of the first converted to a COVID ward, and so he ended up working with many of the sickest COVID-19 patients. While the doctors and nurses treating COVID patients received a lot of free meals at the beginning of the pandemic, he felt like those gestures, while well-intentioned, missed the point.

“This wasn't anything new for us,” he says. He’s put himself at risk every day of his career. While a free pizza is nice, he argues that people don’t understand the toll that being in the medical profession takes, and for many, the pay is insufficient for this back-breaking, life-saving work.

“I feel like I am saving lives, and I could work in a bank and make twice this,” Sam says. “In a perfect world, I'd get out of health care altogether.”

For many Americans, the pandemic has served as a wake-up call. Similar to cognitive shifts seen in those who survive near-death experiences or the ‘overview effect’ reported by astronauts during spaceflight, people are seemingly more aware now that their lives are precious.

“We started to see a [new] set of expectations about how people want to work, and how they're willing to work now,” Rodney says. “It's really shifting the way that we think about energy, our personal wellbeing—and managing that energy over money.”

There are, of course, still financial pressures that Americans are facing, particularly younger workers who are paying off student loan debt while experiencing soaring housing prices and increasing inflation.

But Rodney says that the data indicates people want to design their lives to prioritize having the necessary time and energy to enjoy life over making money. And Americans on a whole are pretty optimistic that they will find ways to generate the necessary income to get by and still be able to build a much more “intentional lifestyle,” she adds.

“It has such big implications for how our lives are going to be designed, or cities, or businesses. I don't think we're going to go back, “ she says, adding that she expects a certain level of worker leverage is here to stay.

That’s due, in part, to Americans being more willing now to take big swings in their life and jump into the unknown, whether that's moving across the country or taking a new job. “You might have been more hesitant before, but now as we've faced so much change…we can do anything, we can create our own momentum,” Rodney says.

As for Sam, he hasn’t yet pulled the trigger on setting up a shop in a small town somewhere, but the dream certainly isn’t fading. “Probably twice a week, I think about that cheese shop in my mind. It's a real place to me,” Sam says.

The biggest hurdle: the fear of instability. “I spent a lot of years not as a nurse struggling to pay my cell phone and certainly never paying a mortgage,” Sam says. “Even though I think nurses are woefully under-appreciated, this is the most financially secure I've ever been in my life, and it's hard to take that leap.”

But never say never. About 69% of millennials surveyed report that they’re actively seeking alternative lifestyles to create a happier life than they envisioned for themselves pre-pandemic.