Why and how managers should help workers set boundaries 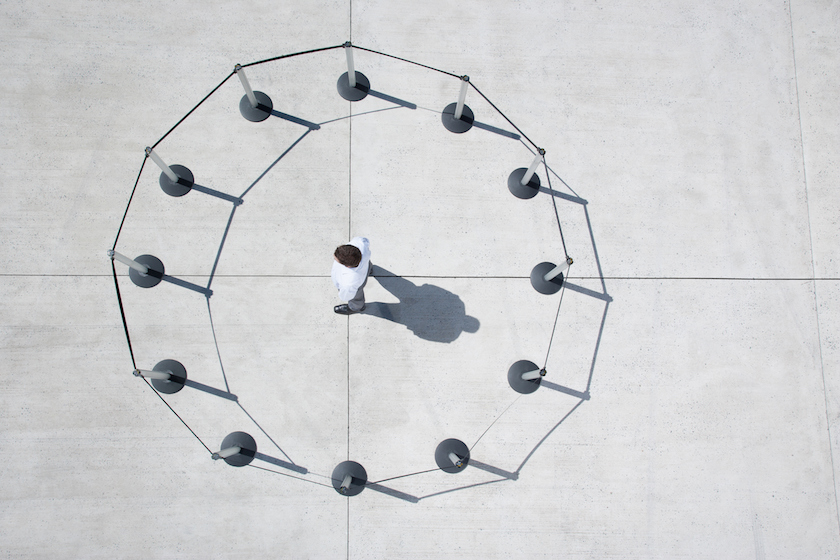 In the old days, work was work, and home was home. Now, technology and the ability to work from anywhere have blended the two together.

That’s good news for people who want to work from home sometimes or go to an event at their child’s school and then make up the time at night. But it creates new issues.

The Flex + Strategy Group/Work + Life Fit company did a survey recently of full-time workers, and found that while 97% had some sort of flexibility, only about 40% received any guidance from their employers on how to use that.

A strict separation between work and life creates big boundaries. Integration requires setting micro-boundaries daily. Will I answer email now or not? Can I turn off my phone on weekends? Many people don’t know where to draw the line.

To which a manager might say, so what? Is it my responsibility to help employees figure out their boundaries?

Like the phrase “work-life balance,” the word “boundaries” has an unfortunate subtext: people will want to work less. As Leslie Perlow, a Harvard Business School professor and author of the book Sleeping With Your Smartphone, describes this thinking, “Now everyone’s going to be entitled, and want these boundaries, and it will all fall on me.” Someone has to be on the 10 p.m. phone call with the team in Asia. If everyone else is asserting their need for boundaries, that someone will always be the manager. Who wants that?

But if done right, helping team members figure out how to set boundaries has an upside for managers too. Melanie Nelson, a former manager at several biotech firms who runs the blog Beyond Managing, puts it this way: “Healthy boundaries help decrease team turnover, and overstretched people make more mistakes.” Having overstretched team members “introduces extra risk into my projects,” and projects are often risky enough on their own. Just as important, the strategies managers can use to help people set boundaries in a 24/7 culture have added benefits, including better communication and a more cohesive, engaged team.

So, how can you help team members set boundaries?

First, make sure people can set boundaries by structuring projects to avoid crises. “I work to reduce last-minute crunch times,” says Nelson. “I make sure people know their priorities and timeline expectations.”

Well-planned projects with mini-deadlines along the way make it possible to work in a sustainable manner. On her projects, if there were odd-hour calls to accommodate a global team, Nelson would set up a comp time policy where people could take time off in return.

Second, take stock of team members’ assumptions. Does someone respond to your emails within 10 minutes day or night? This person might need to have a conversation about expectations. If you like to catch up on things at night after the kids go to bed, or on weekends, explain why, and say how you’ll indicate if you do need a response right away. In a worst-case scenario, you may need to start saving emails as drafts and sending them during regular business hours.

If a team member is teetering toward burnout, you may need to have a conversation about his time management or workload. David Niu, founder of employee survey tool TINYPulse recommends making sure that you have been clear enough about the goals and expectations of your project. If someone is overwhelmed, that person should feel safe asking for help: communicate that “it’s okay to ask for help, but you can’t ask for help after you drop the ball,” Niu says. It’s better to ask ahead of time, so the workload can be redistributed.

If your company’s culture values overwork, you may need to take a different approach. “The truth is, it’s a collective problem, not an individual problem,” says Perlow. She spent several years studying BCG, a major consulting firm with an “always on” mentality. People wouldn’t make plans because some client demand might come up. This cycle of responsiveness meant that people often felt less effective than they might otherwise.

Perlow helped roll out a program at BCG’s Boston office that was originally called “predictable time off” (PTO; the acronym has changed over time). Each team member on a project would get one weeknight off per week. Teams would plan their work to consistently cover client demands, much like doctors have an on-call schedule.

Of course, this didn’t solve all work-life balance issues. After all, different workers want different things, and each person should see her top “life” priority respected. Many consultants didn’t want a weeknight off if they were traveling. They wanted to get home sooner.

But Perlow stresses that after studying teams, she’s learned that they need to first figure out how to achieve one simple goal, and then use those strategies to achieve other goals. “We all have to share the same boundary as a starting point, and use that as a common point to unleash a process,” she says.

As people learned how to share their expertise, how to include other people in conversations with clients, and how to work more efficiently overall, they could figure out how to meet other personal desires (such as being home for dinner two weeknights per week). The spillover benefits of this process included measurably shorter workweeks and happier consultants. “When you’re always on, there’s no pressure to think about how we’re going to do this most effectively,” Perlow says. Clients reported no negative impact, and consultants on PTO teams were significantly more likely to see a future for themselves at BCG.

Of course, for a culture of boundaries to work, managers have to enforce boundaries for themselves, too. “People follow your actions, not your words,” says Perlow. “Seeing you do it means you mean it, and that makes it’s okay.”