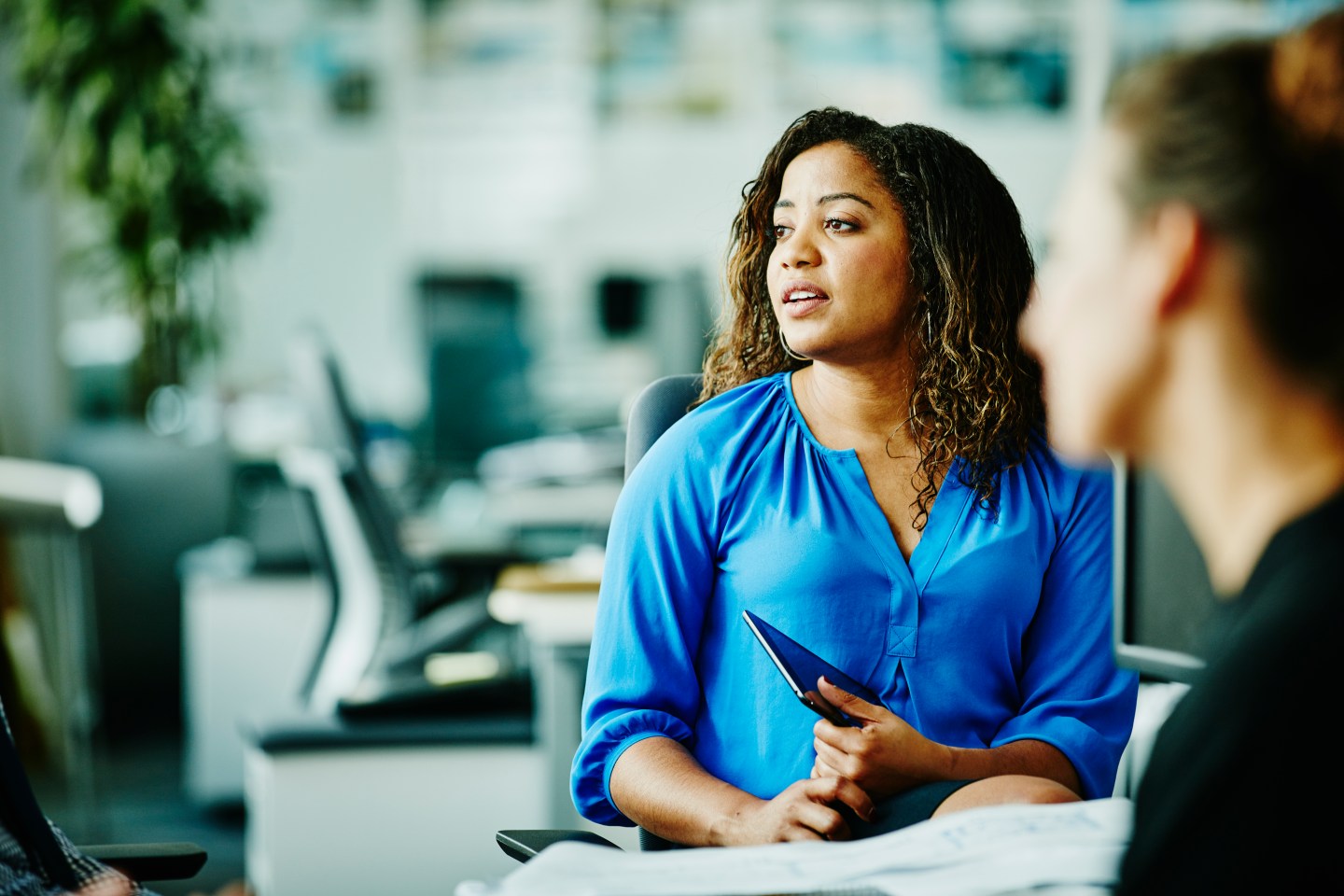 Climbing the corporate ladder doesn't yield the same emotional payoff for women as for men, according to a recent study.
Getty Images

Good morning, Broadsheet readers! Finland will apply for NATO membership, Jen Psaki passes the press secretary torch to Karine Jean-Pierre, and getting promoted doesn’t give everyone the same amount of satisfaction. Go get your Monday.

– Feeling good? Getting promoted at work is typically associated with feelings of pride, excitement, accomplishment, and happiness. But a new study finds that men who climb the corporate ladder gain more emotional satisfaction from their rise than women do.

Jochen Menges, a professor at the University of Zurich and Cambridge Judge Business School, is a co-author of a paper published in the journal Sex Roles, “Gender and Emotions at Work: Organizational Rank Has Greater Emotional Benefits for Men than Women.” Menges and his co-authors asked about 15,000 survey participants to rate how often they feel certain emotions at work, ranging from confidence and contentment to boredom and disgust, and their place in the corporate hierarchy, among other questions.

Most respondents who rank higher on the org chart report feeling greater positive emotions than negative ones, but high-ranking men report emotional satisfaction to a greater degree than their women peers. “When women gain power in an organization, it doesn’t seem to carry the same emotional benefit as it does for men,” explains Menges.

The most striking difference is in feelings of respect as workers ascend the corporate ladder. Entry-level women report feeling more respected than men. But at higher levels of an organization, men say they feel respected much more than women do. It’s worth noting that women don’t report feeling less respected as they rise than they did at the beginning of their careers. Rather, men quickly overtake them with even greater feelings of respect the higher they climb.

The study’s real-life implications are wide-ranging. Emotions matter at work, Menges says, and companies should take them seriously. Feeling a lack of satisfaction as they climb the corporate ladder could be yet another factor that prevents women from reaching the very top—further reinforcing gender gaps in the C-suite. As new generations of employees seek purpose and authenticity in their jobs, these gaps could become wider still.

The effects can be cyclical, too. In industries with a greater representation of women, women report feeling more positive emotions and less negative emotions at every rank. If climbing the corporate ladder doesn’t provide emotional satisfaction, and fewer women decide to do so as a result, certain industries may see a greater gender imbalance at the top.

Employers should monitor how the people who make up their workforces feel, Menges suggests, to help counter this issue. Anonymized surveys, like the ones the researchers conducted, can help organizations understand who feels good at work and who doesn’t.

- Hate crime. The FBI is investigating a mass shooting at a Buffalo, New York supermarket on Saturday as a hate crime, describing it as "a case of racially motivated violent extremism." Vice President Kamala Harris called the shooting part of an "epidemic of hate." ABC News

- Over and out. Jen Psaki held her last briefing as White House press secretary on Friday. In her 224th briefing—more than those held by all of former President Donald Trump's press secretaries combined—she thanked journalists for "making me better." Karine Jean-Pierre will take over the role for the Biden administration this week. CNN

- New members. Finland, led by Prime Minister Sanna Marin, confirmed that it intends to join NATO amid Russia's invasion of Ukraine. The proposal will go to the country's parliament for ratification today. Sweden, led by Prime Minister Magdalena Andersson, is expected to follow suit as soon as this week. Guardian

- Dangerous detention. Brittney Griner's pre-trial detention in Russia was extended through June 18 by a Russian court, according to state media. The WNBA star has been held on drug-related charges since February. The U.S. now classifies Griner as wrongfully detained. CNN

- Funeral disruption. Israeli police stormed the funeral procession on Friday for Shireen Abu Aqleh, the Palestinian-American journalist killed by Israeli fire during a West Bank raid. Israeli police claimed that mourners "disrupt[ed] public order;" the funeral featured several Palestinian flags, the display of which is banned in occupied East Jerusalem. The EU said the use of force was "unnecessary" while the White House called the footage "deeply disturbing." Guardian

- After the election. Leni Robredo, the outgoing vice president of the Philippines, acknowledged her loss in the country's election and asked her supporters to accept the election results. She didn't, however, mention winner Ferdinand Marcos Jr. by name. The election has been marred by disinformation and allegations of vote-buying. New York Times

Women's sports fans: Where the hell are you? Jezebel

Study identifies potential biomarker for SIDS, but a test for it is a long way off CNN

"To anyone else out there isolating or dealing with COVID, I hope you take good care of yourselves!"