Executives from Match, Blackstone, and Accenture are mentoring global women leaders on the skills needed to succeed in corporate America 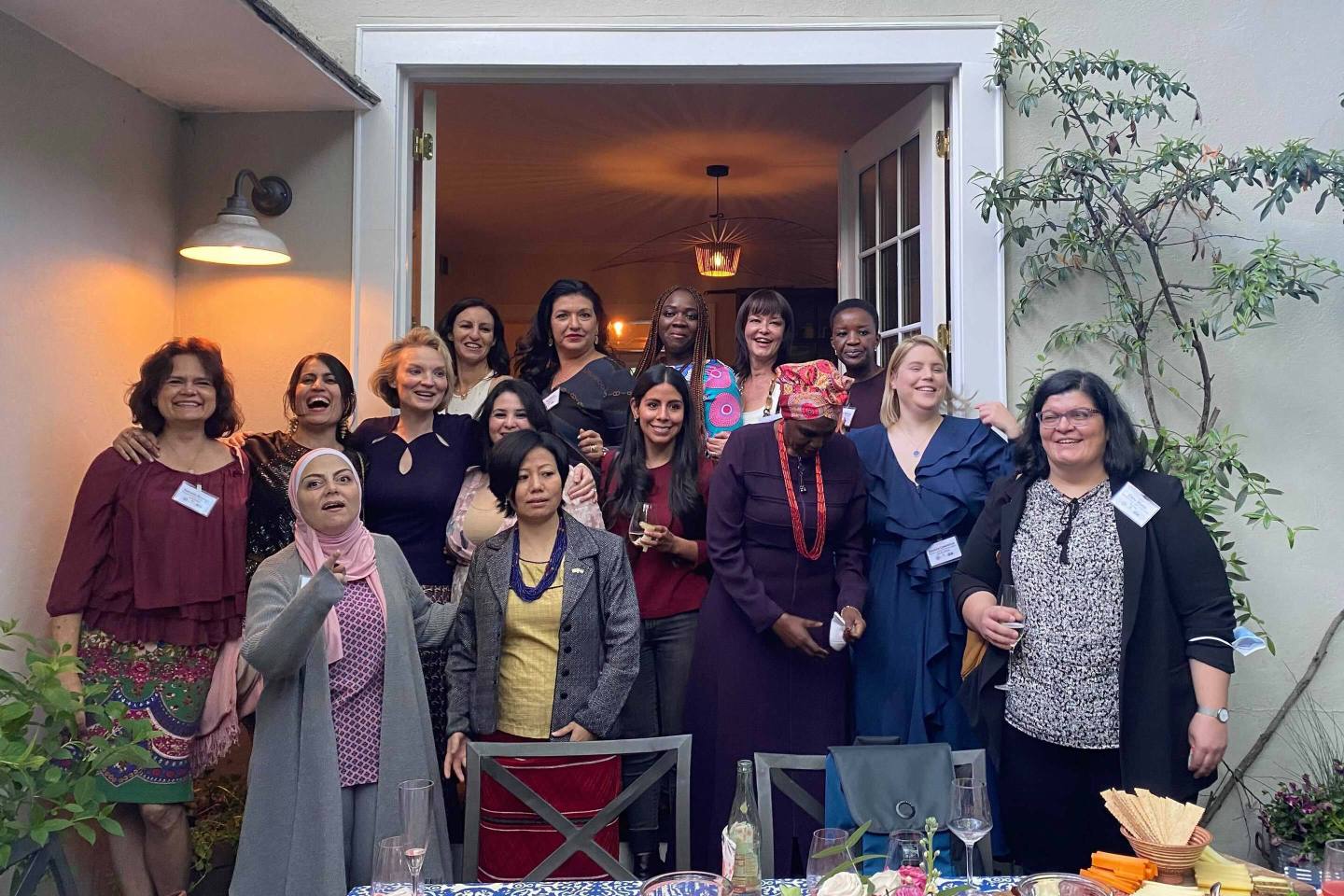 Good morning, Broadsheet readers! The Senate fails to pass the Women’s Health Protection Act, a baby formula shortage leaves parents panicking, and women founders and CEOs from all over the world are working alongside Fortune MPW execs in this special program. Have a terrific Thursday.

– Global perspective. Since 2006, Fortune Most Powerful Women, the global women’s empowerment nonprofit Vital Voices, and the U.S. Department of State have partnered to bring mid-career women from around the world to the U.S. for a three-week mentorship experience. The participants—founders and executives with impressive resumes of their own—are matched with female executives at U.S. companies to expand their networks and augment their business skills.

I spent the first half of this week in Washington, D.C., where this year’s cohort of 15 women—the first to join us in person in two years—met each other for orientation before scattering across the country to their respective companies. The experiences they bring to the table are fascinating, and sure to make for interesting learning experiences for the women who mentor them this month, too.

Yara Argueta, from Guatemala, is the former CEO of the Central American paint and coatings company Grupo Solid, a position she earned at age 28 and held for 11 years until her retirement at 40. (“I don’t want to buy a yacht, so why should I keep increasing my bank account?” she says of her retirement decision.) Her career has taken many forms since then: she serves as a consultant and board member, advising what she calls “one-man show companies” who need an outside voice to tell them no. In 2019, Argueta ran for vice president in Guatemala. Her ticket came in ninth nationwide and third in her local district. She plans to one day run for Guatemala’s presidency, a position she hopes to secure in the next two decades. Before pursuing that goal, she’s heading to H&R Block in Kansas City, Missouri, where she’ll work alongside chief people and culture officer Tiffany Monroe.

Emi-Beth Aku Quantson holds the title of chief innovator, CEO, and founder at the 7-year-old coffee company Kawa Moka in Ghana. Her business sources its products from rural farmers, who are mostly women, and is on a mission to help elevate Ghana’s economy by processing and roasting coffee locally, rather than only exporting raw materials. She’ll spend the next two weeks with Match Group chief strategy officer Faye Iosotaluno.

Rita Tage makes kiwi wine as the founder of Naara Aaba Kiwi Winery in India’s Arunachal Pradesh, a northeastern state that borders Bhutan and Tibet. “The winery was started only because we wanted to have the farmers make use of the fruits that they were feeding to cattle and other animals,” she explains. She’s headed to the alcoholic beverages business Beam Suntory, where she’ll work with president of brands Jessica Spence. Tage’s wine is, so far, only sold in her state, and she’s eager to gain knowledge that will help her meet the regulation and licensing requirements to sell her products to a wider market.

Govinda Rivera is the manager of La Huerta, a Bolivian chain of natural products stores. She founded the business at 25, and says she initially struggled as a young CEO. “Suppliers, because they were usually much older than me, didn’t have a lot of faith in the project,” she says. “Hiring people was challenging too because most of the employees were older than me.” Five years later, she’s looking for guidance scaling a company in a mostly unregulated economy. She’ll spend the next few weeks in Chicago at Abbott with executive vice president of rapid and molecular diagnostics Andrea Wainer.

These are just a few of the women who took several weeks out of their lives to travel stateside for the program. The rest of the group includes lawyers, nonprofit founders, and technology executives who will learn from and work alongside executives at AARP, Accenture, Blackstone, and Morgan Lewis, among others.

We will hear from the mentees again at the close of their program later this month, when they’ll join us in New York for a Fortune Most Powerful Women dinner. I, for one, am excited to hear their first impressions of corporate America—and how they’ll apply their knowledge at the program’s end.

Broadsheet readers: are you or your friends and family being affected by the U.S. baby formula shortage? If you’d like to share your experience, email emma.hinchliffe@fortune.com. Your reply may be featured in a future edition of the Broadsheet.

- Votes are in. The Senate yesterday formally struck down the Women's Health Protection Act, which would have given federal protection to abortion access, with 49 votes in favor—far short of the 60 needed to overcome the filibuster. Democratic Senate leadership expected the bill to fail, but embraced the opportunity for voters to see where each senator stood on the issue. Sen. Joe Manchin (D-W.V.) was the only Democrat to vote against the bill. Republican Sens. Susan Collins and Lisa Murkowski have introduced competing legislation that would give religious-affiliated hospitals the right to refuse to perform abortions. New York Times

- Out of stock. Parents are scrambling to find baby formula on store shelves following supply chain issues and product recalls. As of April 24, the out-of-stock rate for powder and liquid baby formula hit 40%, with some states seeing out-of-stock rates higher than 50%, according to retail data provider Datasembly. Abbott Nutrition, which recently recalled several formula brands like Similac, said it is prioritizing production to meet demand. Fortune

- Leading on leave. Spain is set to become the first western country to offer national paid menstrual leave. The country is expected to approve a proposal next week that would allow people who menstruate to receive up to three days off from work each month if they suffer from painful or disabling periods. Japan, Indonesia, South Korea, and Zambia also offer menstrual leave. Telegraph

- In the clear. Kohl’s shareholders rejected pressure from activists to overhaul the retailer's structure, opting instead to reelect the company's 13 board members at its annual shareholder meeting. Activist firm Macellum had pushed for the revamp, arguing that CEO Michelle Gass's business strategy, which includes partnering with Sephora and Amazon, hasn't been enough to turn around the retailer. (For more: Read Fortune reporter Phil Wahba's piece on how Gass rebutted the activist investor.) CNBC

- Caring about childcare. Nearly 70% of women with children under five say they are more likely to choose an employer that offers on-site access or helps pay for childcare, according to a new survey from Marshall Plan for Moms and McKinsey. A higher share, 83%, say that these benefits are an essential factor when considering switching jobs. But just one in 11 respondents currently has access to financial subsidies for childcare, and 53% of women with young children cite childcare needs as a key reason for leaving the workforce, taking on fewer hours, or switching jobs. New York Times

- A rattled SCOTUS. ​​The Supreme Court will meet Thursday for the first time since the draft majority opinion on Roe v. Wade was leaked last week. The original draft from Justice Samuel Alito, which would overrule Roe, is still the only opinion draft in circulation, with no dissents from the liberal justices yet. Typically, written arguments are circulated back and forth as the justices debate their opinions. Politico

- Primary elections. Primary elections for Nebraska and West Virginia were held on Tuesday. In Nebraska, state senator Carol Blood won the Democratic nomination for governor of Nebraska. Democratic House candidate Patsy Panning Brooks will appear on the ballot in a special election on June 28 ahead of the November midterms (Only one woman has represented Nebraska in the U.S. House, Republican Virginia Smith from 1975 to 1991). In West Virginia, incumbent Republican Carol Miller is strongly favored to win reelection for the state’s first congressional district in November. Center for American Women and Politics

- Tragedy in the West Bank. Al Jazeera reporter Shireen Abu Akleh was shot and killed on Wednesday while covering Israeli army raids in the West Bank. The Qatar-based outlet reports that Israeli forces targeted the Palestinian-American, who was wearing gear identifying her as a member of the press when she was shot. The Israeli military backtracked from its initial claim that the fire may have come from Palestinian forces. The Committee to Protect Journalists has called for an investigation into her death. Associated Press

The pandemic has been punishing for working mothers. But mostly, they’ve kept working New York Times

"Eliminating the right of women to make decisions about when and whether to have children would have very damaging effects on the economy and would set women back decades."