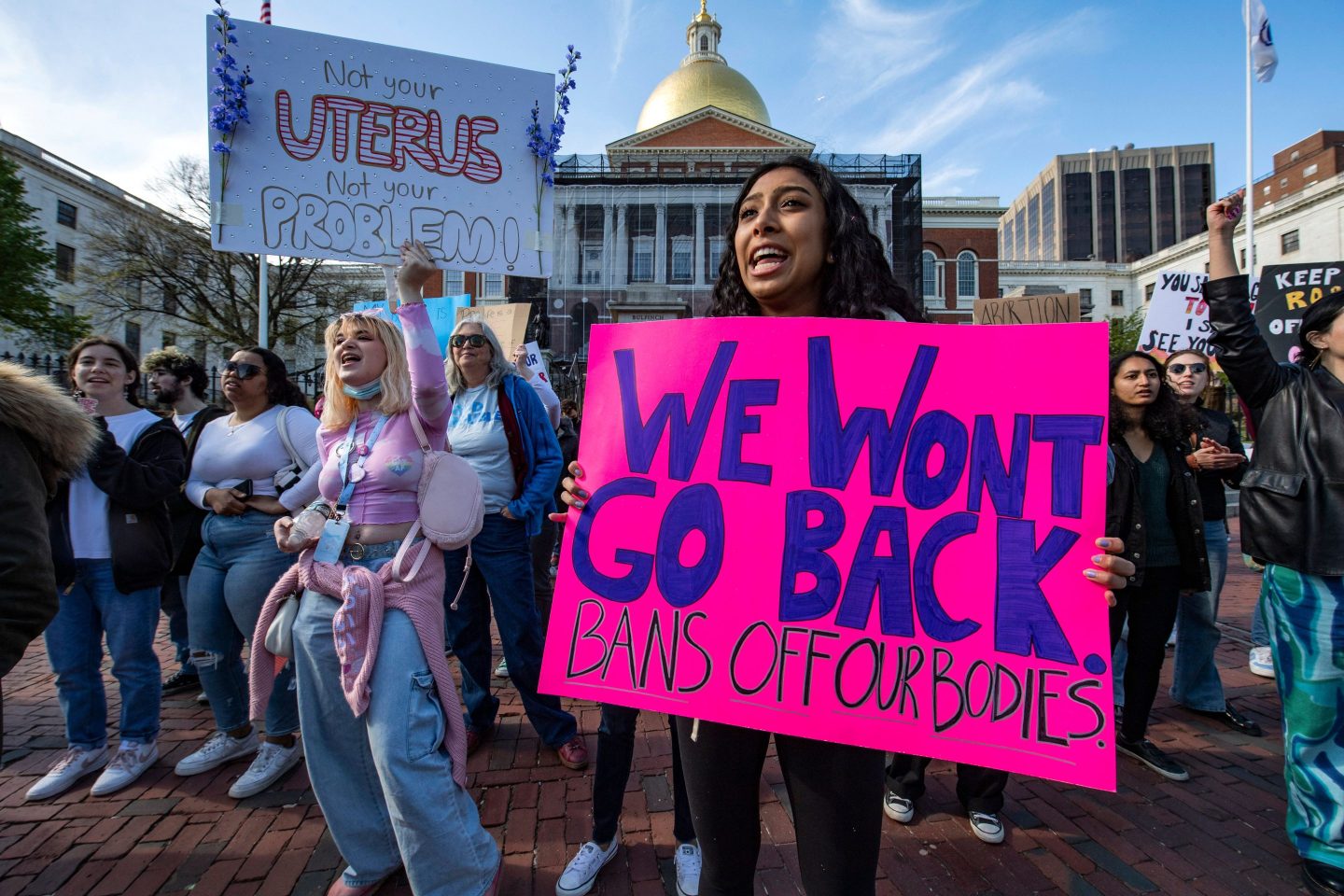 Pro-choice demonstrators rally outside the State House in Boston on May 8, 2022. “The enthusiasm corporate leaders have shown for causes like gay marriage makes their tepid response on reproductive rights so far that much more astonishing,” writes Liz Plank.
Joseph Prezioso—AFP/Getty Images

Corporations have taken stands on controversial issues ranging from the Trump administration’s Muslim ban, to Black Lives Matter, to anti-trans bathroom bills. But when it comes to something as simple as women’s reproductive freedom, their near-silence since last week’s cataclysmic Supreme Court leak of a draft opinion that would overturn Roe v. Wade has been stunning. A handful of companies, including OkCupid, Virgin, Levi Strauss, Airbnb, and Bumble, have slowly trickled in with statements supporting women’s right to choose. But why have there been so few?

Corporations used to have the luxury of staying out of politics, but in the last few years pressure has mounted for them to take a stand, especially on issues that represent major violations of human rights. Most recently, Disney opposed a Florida law that censored discussion of LGBTQ+ issues in elementary school, and it has already faced legal and political repercussions. Still, after being persuaded by its employees, both internally and via public protest, and hearing some of its biggest stars, including Gabrielle Union, the company remained steady in its position to defend queer children’s safety and well-being, regardless of the economic ramifications. And it wasn’t just Disney: 150 other companies with offices in Florida, including Amazon, Apple, Microsoft, and Salesforce openly opposed the so-called Don’t Say Gay bill by adding their name to a Human Rights Campaign petition. Even storage companies took out big billboards to signal their support of LGBTQ+ rights.

Even back in 2015, when gay marriage was still illegal in most states, Big Business felt uniquely unanimous in publicly supporting it.

The enthusiasm corporate leaders have shown for causes like gay marriage makes their tepid response on reproductive rights so far that much more astonishing. Abortion is already legal. Women aren’t even demanding more rights; they’re simply asking to preserve the ones that they secured in the 1970s! If there was a leak that the Supreme Court was going to make gay marriage illegal tomorrow, every single company would be posting flashy rainbow graphics and posting quick-response public statements to condemn it. Why are they so scared to take a position when it comes to a basic right that women already have?

It’s not like women are asking for anything radical. In fact, the idea of a total, no-exceptions federal abortion ban is so vicious and so extreme that it doesn’t enjoy a majority of support in any state, including the red ones. Most Democrats don’t want to overturn Roe v. Wade, but most Republicans and Independents don’t either. That explains why the GOP has spent more time talking about the Supreme Court leak than about the potential legislative wins that it would secure. Republicans know overturning Roe is deeply unpopular, and Democrats know it too—but shockingly, it seems like corporate America is living in a different universe.

The myth of an ‘even split’ on abortion

The idea that Roe is divisive is pure fiction. While many Americans might not choose to have an abortion themselves, and some oppose it broadly, most of them do not want the state to make that decision for them. But the myth that people are evenly split on this issue persists.

A leaked email from enormous public relations firm Zeno, obtained by independent journalist Judd Legum and published on the website Popular Information, showed that that firm’s corporate clients are being briefed to stay quiet. “This topic is a textbook ‘50/50’ issue,” Katie Cwayna, Zeno’s executive vice president for media strategy, said in the email. “Subjects that divide the country can sometimes be no-win situations for companies because regardless of what they do they will alienate at least 15 to 30 percent of their stakeholders.” But fear not: The firm put out a flowery International Women’s Day tweet this year in support of all the “fearless women around the world who continue to #PressForProgress.” There’s nothing like supporting women by explicitly instructing corporate leaders to stay silent when women’s basic human rights are under assault!

Corporate leaders who are being told that half the country wants to overturn Roe are being lied to. In fact, 72% of Americans say that the decision regarding any abortion should belong to the pregnant woman alone—the very principle at the heart of Roe. Even some people who personally oppose abortion say it ought to be legal in some circumstances. But it seems like there’s a fundamental misunderstanding of what it means to be in support of reproductive rights. Just because someone supports abortion rights, it doesn’t mean they are saying they personally support getting one.

The fundamental mistake when it comes to the corporate approach to reproductive freedom is that a pro-choice stance is not about anyone’s personal preferences when it comes to family planning: It’s about the state not becoming the arbiter of it. Personal liberty is something any company should eagerly get behind.

Besides, companies have taken much bolder positions on issues impacting much smaller groups of people. Half of their workforce is made up of women! Don’t companies want to symbolically at least, signal to their female employees that they have their backs?

And this isn’t even just about female workers. Men’s reproductive freedom is just as important as their partners’. American companies have been able to compete and thrive because of the right to abortion and the right to legal contraception (which, by the way, will also be weakened if Roe is overturned). There isn’t a single CEO who hasn’t benefited from family planning and abortion rights—either personally by having the option to control when they have kids, or by virtue of their employees being able to make those decisions to maximize their happiness and productivity as workers. An end to legal abortion would be a tsunami for our economy.

My message to corporate leaders is simple: Take a stand for women just as you’ve taken stands for everybody else. If you’ve pulled investments from states that discriminate against LGBTQ+, do it for the states vowing to throw innocent mothers in jail. If you took a position on Black Lives Matter, take one for Black women who will disproportionately die if abortion becomes illegal. If you’re a company that has ever bragged about empowering or hiring women, show us that you care whether we’re dead or alive.

Liz Plank is an award-winning journalist and the bestselling author of For the Love of Men.