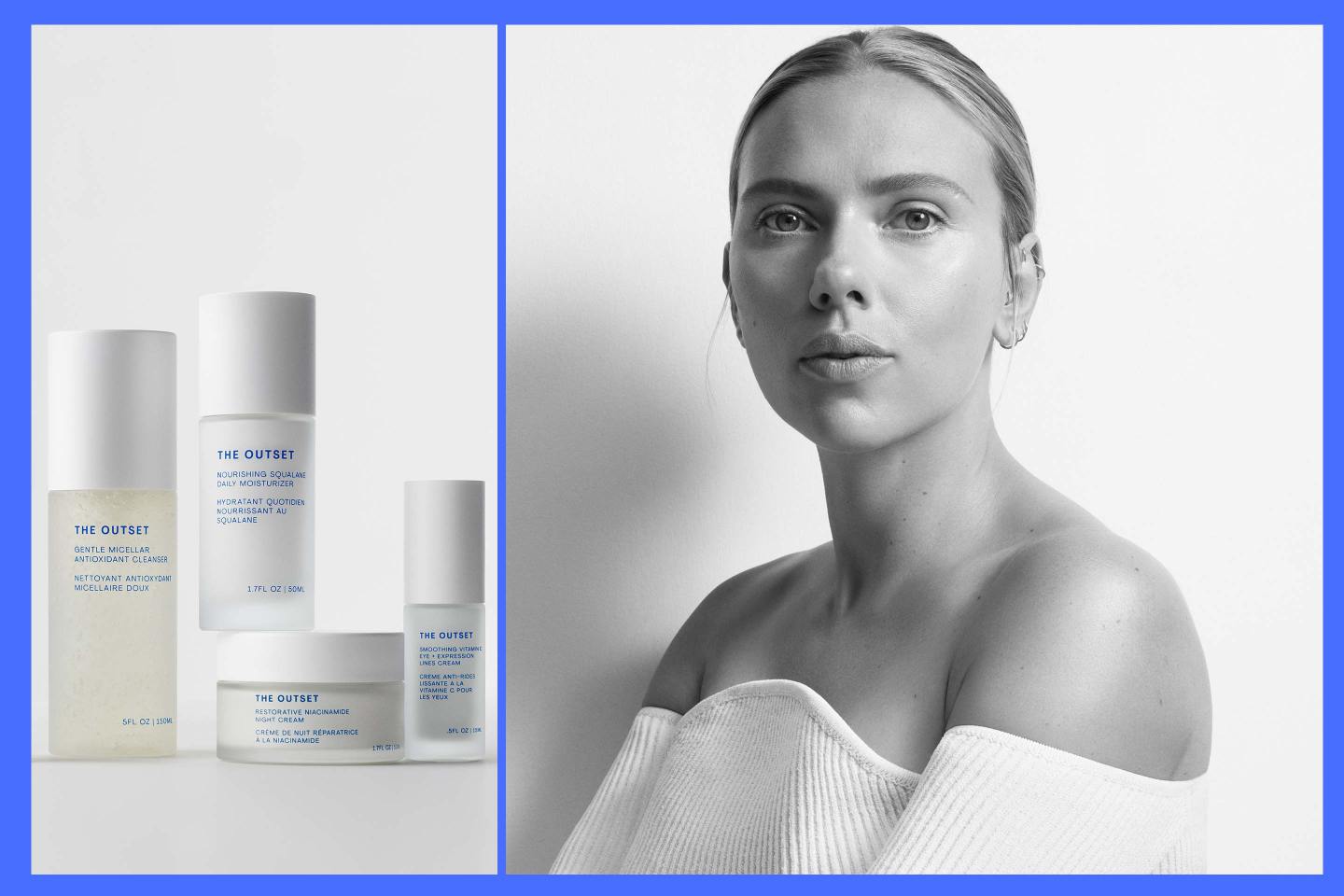 Scarlett Johansson and her new skincare brand the Outset.
Photos courtesy of The Outset

Good morning, Broadsheet readers! Marine Le Pen loses her bid for the French presidency, a bipartisan consensus calls for Texas to put a stop to a scheduled execution, and Scarlett Johansson is striking out on her own with her new skincare brand. Have a meaningful Monday.

– Leading lady. Scarlett Johansson has been many things: the highest-paid actress in Hollywood, a longtime luxury brand spokeswoman, and an original Marvel superhero, one of the most successful franchises in movie history. But those successes within corporate structures have sometimes come with caveats. See: her recent lawsuit against Disney over the corporation’s streaming distribution of Black Widow, settled in September.

So for her next endeavor, Johansson had plenty of reasons to want to go it alone. Last month, the actor launched the Outset, a skincare brand she founded with CEO Kate Foster Lengyel. Though Johansson took meetings with several beauty giants, from Shiseido to Estée Lauder, she ultimately accepted financial backing from investment firm Najafi Companies. “It felt like I would be able to have ownership in a different way if I did it from scratch,” Johansson said in an interview. “I developed the understanding that this was something I wanted to do independently of a larger corporation.”

Photos courtesy of The Outset

The brand is debuting five skincare products at Sephora this week, priced between $32 and $54.

Johansson settled on skincare despite a crowded celebrity beauty brand space because it felt more authentic to her own experience—she had problem skin well into her 20s. And the idea of ownership is not just about the business, but having autonomy over her own her image. “I didn’t want to represent someone else’s beauty ideal,” she says.

The actor may not be the face of the Outset forever, either. The hope is that the brand will grow beyond her own celebrity. (Johansson is featured sparingly on the brand’s minimalist website.) Cofounder Foster Leyngel acknowledges that “there is a ton of saturation” in the celebrity beauty brand space (Rihanna’s Fenty Beauty, Ariana Grande’s r.e.m. beauty, Selena Gomez’s Rare Beauty, Lady Gaga’s Haus Labs, to name a few), as does the Najafi Companies, which has backed celebrity-founded companies like actor Shay Mitchell’s travel brand Beis. “It’s not about bringing more brands to market with a celebrity face,” CEO Jahm Najafi tells Fortune. “We’re looking for special brands that can stand on their own.”

While the Outset is playing up “simplicity” as its branding differentiator (the”white t-shirt” of skincare, so to speak), running a startup is anything but simple. Foster Lengyel comes from a fashion retail background and most recently founded a product recommendations platform before joining what would become the Outset two years ago. And Johansson is getting used to her new role as not just the face of a brand, but its very foundation. “I’ve worked in one industry for 30 years,” she says, “[with] a lot of experience working for other people. … Now I’m comfortable sitting in the driver’s seat, and not necessarily knowing where the car is going to go—but I’m comfortable driving it.”

- Sibling rivalry. Sam's Club isn't just a little sibling to Walmart. Sam's Club CEO Kathryn McLay makes that clear in a new Fortune profile by writer Phil Wahba. The "warehouse-club chain is enjoying its own renaissance, finding a niche, and forming a clear identity" separate from Walmart and Costco. Fortune

- Sensitive sanctions. The U.S. has imposed sanctions on Russian President Vladimir Putin's adult daughters, but some Putin associates have so far avoided such penalties—namely, Alina Kabaeva, the former gymnast believed to be Putin's girlfriend and mother of three of his children. The U.S. considered sanctions against her, in large part because of the role she is believed to have played in hiding his wealth overseas, but concluded that to impose them would be "so personal a blow" it would further escalate U.S.-Russian tensions. Wall Street Journal

- Urgent call to action. Texas is scheduled on Wednesday to execute Melissa Lucio, convicted of capital murder and sentenced to death for the 2007 death of one of her 14 children. But evidence casts doubt on Lucio's conviction, prompting Republicans and Democrats alike, and even former jurors in the case, to call for the state to halt the execution. A Hispanic woman has never before been executed by the state of Texas. Associated Press

MOVERS AND SHAKERS: Nancy Green is departing as CEO of Old Navy as the Gap Inc. brand cites "execution challenges" at the business. Tina Flournoy is leaving her post as chief of staff to Vice President Kamala Harris; longtime Democratic operative Lorraine Voles is set to succeed her in the role. Capitol Counsel partner and general counsel D'Ana Dow and Etsy chief legal officer Jill Simeone join the board of Bakkt. GoFundMe hires Airbnb's Mai Leduc as head of payments. Stacker, a newswire, hired Twitter's Miriam Daub as director of business operations.

- Home run. This year, a record number of five women worked as official scorers for baseball teams on their Opening Day. The new cohort of scorers, responsible for tracking the details of the game, includes Kara Blackstone for the Diamondbacks-Padres game, Jillian Geib scoring the Dodgers-Rockies, and Sarah Johnson keeping track for the Mariners-Twins matchup. Only four women have served in the role before—ever. MLB

- Second act. Reporting by the San Francisco Chronicle last week suggests Sen. Dianne Feinstein, at 88 years old, is struggling with her own mental capacity. The 19th* poses the question: why doesn't she want to retire? In short, many women get their start in elected office later in life, after raising children or after an earlier career, making the decision to step away from that power more fraught. The 19th*

- Good business. Movies with a higher "authentically inclusive representation" score performed better with audiences and critics, according to a new study by UCLA and Hollywood agency CAA. As one takeaway from their findings, the report's authors recommend that studios decouple the idea of taking "risks" from job security for executives. The Hollywood Reporter

The disinformation campaign behind a top pregnancy website Mother Jones

What's the big deal about a woman being bald? New York Times

"Women’s history has kind of been overshadowed by male-dominated history, not because it’s not there. It’s just in the archives. Their stories really live in journals."

-Lori Ann Terjesen, VP of education at the National Women's History Museum. The museum compiled journals—including drawings, voice notes, and memes—kept by women throughout the pandemic.