A popular coffee chain didn’t lay off a single employee during the pandemic. The CEO explains how they saved jobs 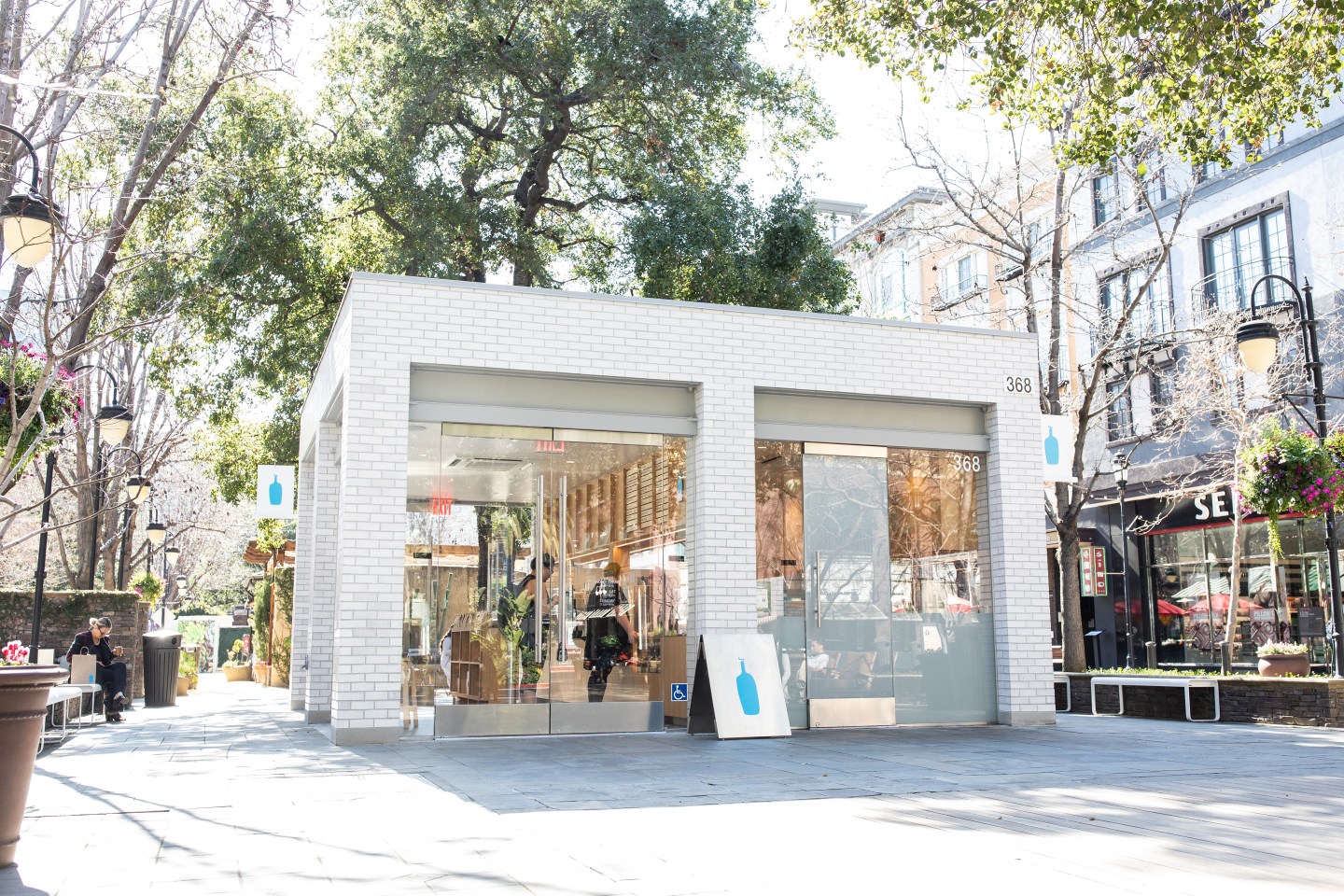 Blue Bottle made it through the pandemic without laying off a single employee.

The coffee chain was founded in 2002 by James Freeman. The founder revolutionized the idea of a coffee shop by creating one that brewed coffee to order using the pour-over method.

Freeman, a musician by trade, also envisioned the cafe as a stage and the baristas as performers, a non-traditional view that got customers’ attention.

While the cafe started as a single shop in Oakland, Cali., today, it boasts a network of cafes across the U.S. and Asia.

Then one day, Irish businessman Bryan Meehan stumbled upon Blue Bottle and was mystified by the way the cafe prepared its coffee, the foundation of the business, and its culture. When he became CEO, he took the reins and grew the company.

Then came Karl Strovink, who was recruited into the company by a headhunter for the role of president of North America and COO. He later found this was a stepping stone, as Meehan had been on the search for his successor and, after finding the perfect fit, named Strovink CEO.

Not long after his promotion, COVID hit.

Karl was raised in Berkeley, Calif. His father was a professor at UC Berkeley, and his mother was a high school teacher, so coffee was always a staple in his household.

He went to Vassar College and then went to business school at MIT. He spent around 30 years working in retail, developing a fascination for consumer products.

After working in global retail with different brands like Converse, he quickly rose in the ranks. In 2019, with consumer demand changing away from products towards experiences, he realized that experiences were more valuable, so he decided to get back into that side of the business.

That same year he received a call from a headhunter who had an opportunity for him at Blue Bottle, which offered him the chance to work with an experiential good and also return to the Bay Area, which he described as a dream come true.

He started at the company as president of North America and COO, and was promoted to CEO just before the pandemic.

During the pandemic many people were filled with uncertainty. Companies laid people off like there was no tomorrow, and to safeguard themselves, people started cutting their expenses. One of the easiest ways to do so was by cutting the number of coffees they bought.

Regardless, instead of laying people off to cut their own expenses, Blue Bottle took care of its own and did the opposite.

“Just recognizing the asymmetry of people who needed income, and needed insurance, and security, working on our cafes, many of whom built the brand, the last thing we were going to do off the bat was say goodbye to all the people that said hello to us all those years ago and built Blue Bottle,” Strovink told Fortune.

During these difficult times, Blue Bottle suffered a tragic loss of one of its own. The cafe manager of the Williamsburg cafe passed away due to COVID-19, so the company knew what it was like to lose someone and decided to do everything they could to keep their employees safe.

Strovink shared that some of the company’s measures to safe keep its employees included “shutting our cafes for three months, paying our baristas full-time wages, and not laying off a single person.”

He acknowledged that this was possible thanks to the backing of Nestlé, who put people first and agreed with the company’s decision not to lay anyone off.

Nestlé acquired a majority stake in the company in 2017. The stakeholder announced on its website that “Blue Bottle Coffee will continue to operate as a stand-alone entity while having full access to Nestlé’s well-recognized capabilities in coffee and its strong global consumer reach.”

Another initiative Blue Bottle took during the pandemic was that it started implementing “coffee hour” every Friday morning in order to stay connected through the tough times.

For about a decade Blue Bottle has used the digital space for users to be able to place orders and get coffee delivered to their homes. During the pandemic, the company used its experience with digital to add flexibility and voice to its offer.

This strategy allowed the company to continue generating revenue throughout a time when most companies were bleeding money. Since March 2020, Blue Bottle Coffee has doubled its digital business.

Last year, CNN voted the company as the best coffee subscription of 2021 and commended it for its variety, customizability, taste, and easy-to-use subscription. Over the last couple of years, the company has strengthened its subscription business by building an a la carte offering, providing perks for customers, and constantly adding talent to the digital team.

As a brand, Blue Bottle has made sure that its cafe, e-commerce, and digital strategies are tied together. “Our app, we think, is consistent with our brand DNA, and the ease that we offer guests an experience, and joining that app experience with an e-commerce experience and a guest experience in-cafe is definitely where we want to go,” said Strovink.

“Moreover, thinking about the ways in which we start our product development digitally and have those products find their way into cafes, versus the other way around, is also an interesting path that we’re pursuing,” Strovink told Fortune.

In Japan, Blue Bottle launched a collaboration with Nigo, a Japanese designer and entrepreneur. The partnership launched online and in cafes, offering customers a coffee line and merchandise. Customers could find these products in Blue Bottle and Nigo’s online apparel stores.

The most valuable asset the company has is ‘care’

However, the company wouldn’t have been able to succeed during the difficult times if it wasn’t for its most important value.

“There is a word that I heard many times around the globe when I first did my pre-pandemic tour at cafes, and I sat with pretty much every member of our staff at our headquarters that kept coming up organically, and that word is ‘care,'” said Strovink.

“I’ve worked probably with dozens of different brands in some capacity or another, and I have never come across a culture that exhibits such care in what it does and how it behaves as Blue Bottle,” he said.

The value is an anchor at Blue Bottle, and it is passed along, becoming part of how the company operates. More than a corporate culture, the company feels like a family, and the “care” value extends beyond the idea of just caring; the brand cares about where it sources its coffee, its relationships with farmers, and exploring all the new avenues coffee, as fresh food, has to offer.

“We really care about bringing out the personality of coffee, we care about how we design our spaces and create theater for our guests, and create moments, where maybe for a moment, a guest can reflect and think about themselves and their day,” Strovink said.

He also talked about the inclusive environment of his company and said, “Our baristas are trained longer I believe than any other coffee shop.” “We take great pride in not only recruiting those who have experience with coffee, but those who don’t but want experience, so we care about turning people on to coffee.”

What makes Blue Bottle different from other coffee brands is that it has taken a non-traditional approach when it comes to expanding. Instead of stamping out the same concept across all stores, the company makes sure each location has a story.

Looking back to move forward

Just like Blue Bottle did with its vision, Strovink has also taken a different approach to leadership. Instead of solely focusing on what’s next, he constantly seeks guidance from those who came before him.

“Those who built this brand, James Freeman, Bryan Meehan, others, and there are many, should not only be respected for their contribution, but they should also be enrolled in the future.”

Strovink says he looks back to his predecessors because those who innovated once can do it again, and therefore he continues to work actively with James and Bryan to move the brand forward.

The brand’s vision for the future is to be the leading coffee brand, and it aims to do so by continuously bringing curiosity and intention to the category. The company wants to innovate and keep welcoming voices and faces.

“Brands have to have meaning beyond just the products that they sell, and that’s something that we absolutely strive to do,” said Strovink.

Now that the company is in the Nestlé family brand, they can look into a future with more resources. Nestlé has guided them through their sustainability goals and given them access to resources like scientists and their product innovation team.

Giving back to the community

Blue Bottle reaches out to their communities, recognizes their farmers and the people in their community, and wants to include more people.

The company also curates different blends of coffee to “support different cultural moments and give proceeds back to various causes, and various communities as it relates to the coffee we make.” Blue Bottle uses this initiative to make consumers more conscious of what they’re consuming and where it comes from.

Blue Bottle is also unique as, unlike other coffee shops, it has seen opportunity in the Asian market. It has expanded into Japan, Korea, Hong Kong, and Shanghai.

This, however, was not an easy feat. Strovink shared that the company will continue to focus on Asia: “Asia in general is a strong high growth market for us where we plan to take our time, do it right.”

For now, the company is prioritizing its expansion into the Asian market before they start thinking about opening in other countries.

Coffee drinking is on the rise in emerging countries. In more mature markets, the trends favor Blue Bottle, as it is hard to walk away from quality products after you have tasted them. “Coffee is moving into the space of wine where terroir and where origin really starts to matter, not just in terms of the farm and the state, but also in terms of the roasting curves and how those beans are treated.”

Another growth observation is that GenZ is now entering the coffee industry from a different angle and prefer to consume iced coffee. “Cold is the new hot,” says Strovink.

The question that lies ahead is how to innovate in the cold coffee category and the different forms of coffee. Not everyone has the time to grind their coffee, some people prefer instant coffee, so the way to innovate is to figure out how to “best move from seed to cup through hospitality,” says Strovink.

Blue Bottle explores through curiosity and intention to navigate the category. “Coffee should never be viewed as a static category where you want something, and you check the box. There’s always a better way, a better tool, a better method. There’s more exploration,” says Strovink.

However, the future of premium coffee is unknown, as challenges like environmental changes, the dislocation of farmers, and the keeping living wages fair are unpredictable.

Finally, as the world continuously evolves to digitize itself, coffee being an everyday experience for many people, could potentially go digital too in the near future. Will we see it on the metaverse? Only time will tell.