America’s elite school for wine experts was torn apart by sexual harassment issues. A new board led by a woman sommelier brought it back 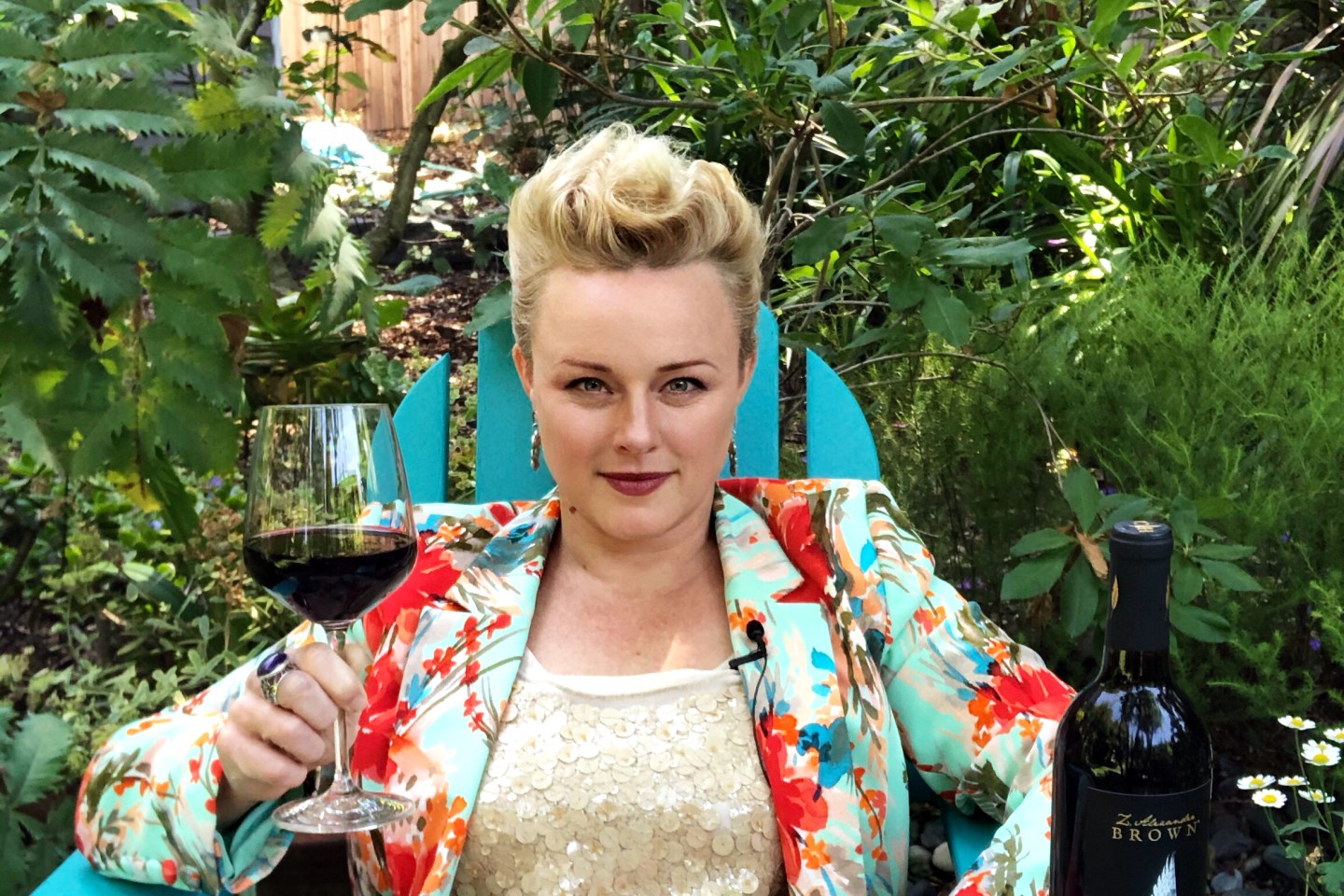 Emily Wines, board chair of the Court of Master Sommeliers, Americas, with a Russian River Valley red blend.
Courtesy of Emily Wines

When an avalanche of sexual misconduct and assault accusations crashed through the U.S. chapter of the Court of Master Sommeliers, the future of the prestigious wine certification organization seemed unclear. How do you go about fixing the damage caused by decades of bad behavior, instituted by a small but powerful faction of members? Perhaps most vital, how to you regain the trust of a shaken membership—even as you’re guiding them through a global pandemic?

For master sommelier Emily Wines, the path was clear—and it had to start at the top. The aptly named Wines ran for and won the chairmanship of the Court’s U.S. board, and since then she’s been building an internal structure that values collaboration, listening, and transparency.

The crisis at the influential nonprofit group came to a head after the publication of an investigative New York Times article in October 2020. In the article, 21 female students working through the rigorous programming of the Court of Master Sommeliers, Americas (CMSA), said that they had been sexually intimidated, coerced, touched, and assaulted by male master sommeliers; in all, their accusations implicated nearly two dozen men. After a lengthy third-party investigation of 23 members of the CMSA, six male master sommeliers were stripped of their titles and ousted from the organization in November 2021—including Fred Dame, credited with founding the Americas chapter in 1987.

The scandal left the organization’s reputation in tatters. “With a whole lot of yuck around men using their power in order to get sexual favors, and women feeling like if they didn’t participate in that they’d lose professional opportunities, it brought up a lot of questions about our exams and transparency in our organization,” says Wines. “Members began asking: Can somebody really pass or fail you at will?”

Those questions had repercussions throughout the restaurant industry. The Court of Master Sommeliers was established in England in 1977, the first organization of its kind to create a structural educational certification program for those pursuing a career in deep wine knowledge and service. The Court’s membership is made up of only those select few who have passed the demanding, prestigious master sommelier examination—currently, just 176 members in the United States.

But a much wider range of professionals take the coursework, which is broken down into four levels of increasing difficulty. To pass all four levels, the cost of coursework and exams is over $6,000—but that doesn’t include the multitude of wines you must invest in to taste and learn, nor suggested extra reading resources, which can bring the cost closer to $8,000–$10,000.

Becoming a master somm isn’t just prestigious; it increases a professional’s potential earning power. According to Indeed.com, the average salary of a sommelier is in the mid-$40,000 range. Gaining the coveted master title can triple that number, as well as open a person’s career to paid speaking engagements and other lucrative opportunities and partnerships in the wine industry at large. But recent events have dimmed the value of the credential. In 2019, enrollment at CMSA courses was at 8,081; in 2020, between impact of the scandal and COVID-19 walloping the hospitality industry, the number of enrolled sommelier students dropped to 1,325.

In some ways, the harassment issues at CMSA reflected gender imbalances in the wider restaurant industry. The original board of the Americas chapter had only one female founding member, master sommelier Madeline Triffon, who is currently the board chair emeritus. Of the Court’s current master somm members, 147 are men and 29 are women. And given that most restaurants don’t have dedicated human resources departments, appropriate behavior in the hospitality industry relies a lot on who’s setting the tone—or turning a blind eye. “Sometimes it takes a crisis to have opportunities to make sweeping change,” says Wines, “and for me and my own leadership journey, it appealed to me to step in and be a part of that.”

Jumping into the fray

An arty kid from the Pacific Northwest, Wines (yes, it’s her real surname), 48, moved to California as a young adult and built her career there. She made a name for herself early on in San Francisco at Kimpton’s now-shuttered Fifth Floor: It was there as wine director that her list won the coveted Grand Award from Wine Spectator and a James Beard nod for wine service to boot. She was only 33 when she became a master somm in 2008, one of only 14 people at the time to pass all three grueling sections of the exam on the first try. In 2017, Wines became the vice president of beverage experience for Cooper’s Hawk, a $340 million national tasting-room-and-restaurants concept, currently in 11 states with seven more to come.

With such a powerhouse pedigree in such a competitive industry, you might expect Wines to have a tough-as-nails demeanor. But that’s not her style. “For me as a leader, my greatest strength lies in my ability to be vulnerable,” she says. “For a lot of people, I think that’s something they feel they can’t have, or they have to hide.” That approach is serving her well as the face of change.

The Court’s prior board grappled with making much-needed changes to the organization, and even created a dedicated hotline to take complaints from members. For some, that wasn’t enough—as the scandal bloomed, several master somms gave up their credentials and walked away from the organization in symbolic protest. And for others, like Wines, the controversy lit a do-or-die fire to change the status quo. New board elections were held in November 2020; new members, including Wines, won eight of the nine seats, and the new board chose Wines as chair.

In her new leadership position, Wines looked to mentors for guidance and support—in particular, founding board member Triffon and the CEO of CorePower Yoga, Niki Leondakis, with whom Wines worked for many years when Leondakis was president of Kimpton Hotels and Restaurants. “She was just such a strong woman who led through adversity and really held her own in a room full of men all the time,” Wines says of Leondakis. “She also brought really incredible emotional intelligence to her leadership style. She’s someone I’ve really emulated and looked up to.”

Triffon—who’s been at the Court since its inception—has also been a valued booster and voice of reason. “Emily is an exceptional natural leader,” says Triffon. “I’m sure it’s a lot of effort, but it’s like ballerinas who make it look effortless and yet have bleeding toes. I can’t say this is sitting easy on her, but it is sitting very naturally on her shoulders.”

Initially the board met multiple times a week via Zoom, methodically determining short- and long-term goals. They rethought their internal systems and their power differential and influence as an organization, not just regarding certification programming but in the broader world. With Wines as chair and master somm Kathryn Morgan as vice chair, board members were encouraged to explore the issues they were passionate about before committing to a particular project or committee.

One of the committees was tasked with Wines’s No. 1 priority: finding a full-time executive director. The search led to Julie Cohen Theobald, the former executive director and CEO of the Educational Theatre Association, who had deep experience in bringing that 90-year-old organization into a modern era. For Wines and the rest of the board, that hire was an important linchpin in addressing sexual impropriety and other matters.

“We’re a board of volunteers, and we all have very big jobs,” Wines says. “Too many things within the organization could fall on the back burner because people didn’t have the bandwidth to address them. We needed somebody for whom it was their job 100% of the time.” The decision sent the right message to the community: Classes have begun to rebound, and Wines says current course offerings are full at just over 3,000 enrollees. As far as Theobald being able to handle the, shall we say, dramatic tendencies of high-functioning wine professionals, it’s not a problem: At her last organization, Theobald’s members were all high school drama teachers. “So we were like, oh yeah, you’ll be fine!” Wines laughs.

Rethinking the board itself

In addition to dealing head-on with issues of ethics and helping the board to determine its major goals, Wines restructured board terms to make sense in terms of career demands. The prior setup of three-year board terms had created issues, not the least of which was the potential for a complete board turnover and loss of continuity. Wines instated one-, two-, and three-year terms, allowing members to run again for their seat if they wished, or step aside for new blood.

Wines’s ability to gather smart partners and listen is setting a new, consistent, and long overdue tone. In January, for the very first time in CMSA history, the organization added four board members from industries outside the wine world, bringing in perspectives from the academic, credentialing, and corporate sectors as the court addressed ethics, communication issues, and employee relations. The impact of that move has manifested in better interactions with CMSA members; clearer terms drawn for recusal from exams and what constitutes an inappropriate relationship; and better exam feedback in the form of scores and detailed exam follow-up reports on what Wines likes to call students’ “areas of opportunity,” along with what aspects of study a student may need to work on.

“You can actually find that rather than fake your way through the skills,” she says, “you start to bring in all these resources and people who can lift you up in the things that need to get done, and lift up the things you want to do.”