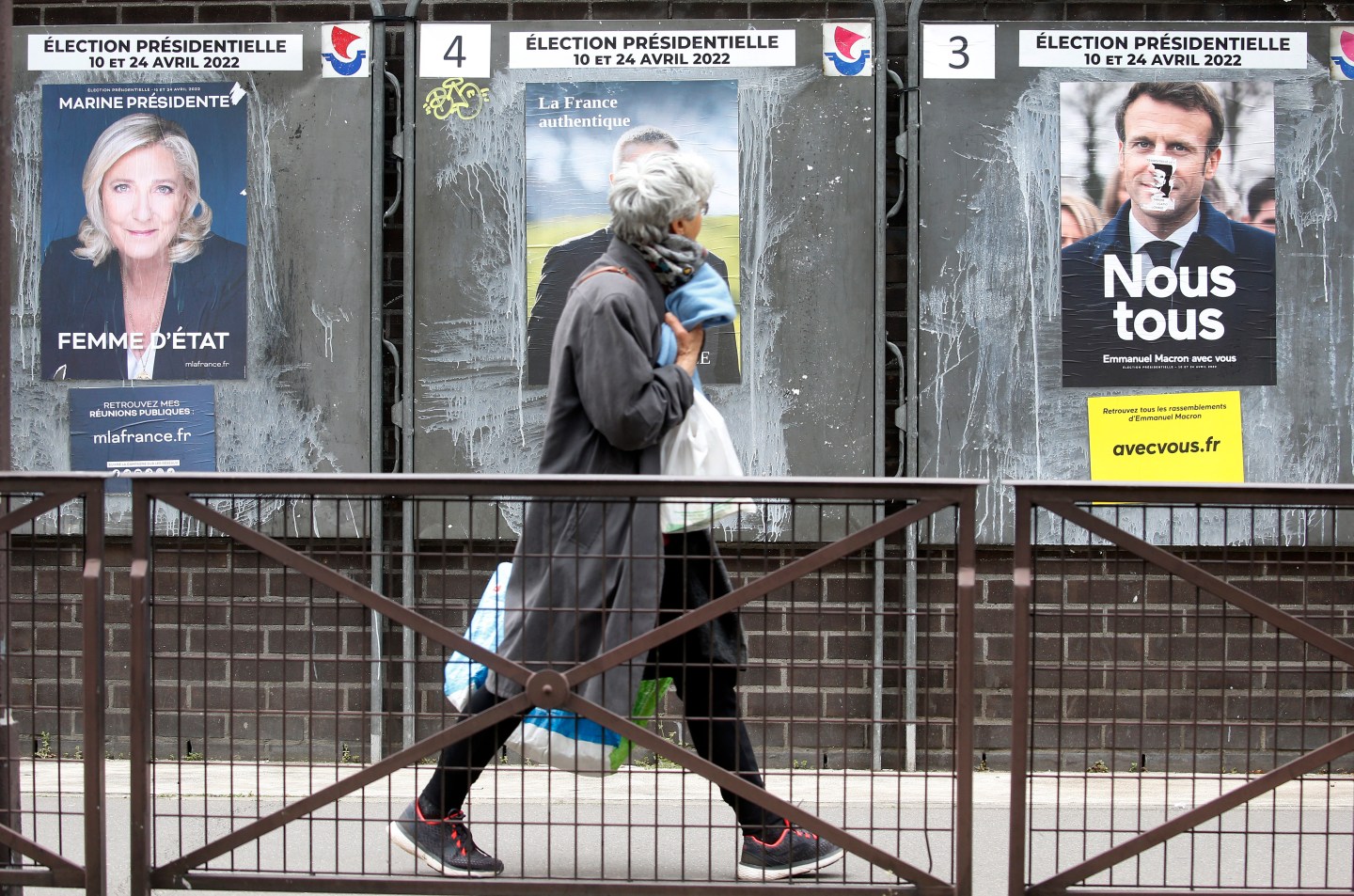 President Emmanuel Macron is set to face his nationalist rival Marine Le Pen in the final round of the French election in a re-run of their 2017 contest.

Macron got around 28% of the vote compared with about 24% for Le Pen, according to pollsters’ projections based on partial results from Sunday’s initial ballot. Far-left leader Jean-Luc Melenchon was third with around 20%. The top two candidates will go forward to a runoff on April 24 to decide who will lead Europe’s second-biggest economy.

A late surge in support for Le Pen has focused attention on French political risk and investors will be watching closely over the next two weeks for signs that the 44-year-old president can consolidate his advantage. The yield on France’s 10-year bonds rose to a seven-year high last week on concerns at the prospect of a nationalist with longstanding sympathies for Russia taking power in the middle of the Ukraine war.

“The numbers are quite encouraging,” said Andrea Cicione, head of research at TS Lombard. “There’s a significant gap between Macron and Le Pen. So if that gets carried over to the second round, that looks like quite a good development for markets, especially bond markets.”

For Le Pen, 53, the projections suggest a record result that would cement her position as leader of the far-right in France and continue the movement’s advance that began under her father 20 years ago. They also show the deep divisions that surfaced when they last faced off five years ago have only gotten worse.

Speaking to her boisterous supporters in Paris after polls closed, Le Pen appealed to voters to unite behind her to oust Macron.

“All of those who didn’t vote for Emmanuel Macron today, of course, should join this movement,” she said. “I call on the French people from the left or the right, of whatever origin, to join this great national and popular movement.”

“The stars are aligned,” said Gilles Pennelle, a Le Pen supporter, as the crowd sang the French national anthem and got stuck into a spread that included champagne bottles with labels reading “Marine Presidente” as well as cheese, cold cuts and bagels.

The atmosphere at Macron’s event was muted in comparison. Even if the president is re-elected, he will face clear challenges in pushing through his economic and social reforms and may struggle to defend his majority in the legislative elections scheduled for June.

Macron only started campaigning about a week ago. After Russia invaded Ukraine in late February, he shifted his focus away from domestic politics to international affairs, casting himself as a statesmanlike figure in turbulent times. But as voter concern that the war would engulf the entire region began to fade, so did the ground swell of support that had pushed Macron’s popularity to 51%.

By the time Macron turned his attention to the election, Le Pen had cast herself as the defender of the ordinary people and framed Macron’s reputation as the “president of the rich.”

Both candidates have benefited from the impotence of the center-left Socialist Party and the center-right Republicans, which imploded when Macron emerged to dominate the political center five years ago.

Le Pen has demonstrated resilience during this election, but she was also directly helped by rival Eric Zemmour, a former TV pundit convicted three times for hate speech, who made her appear more moderate. He came fourth with about 7%. Zemmour’s Reconquete party will urge its supporters to vote for Le Pen in the second round, the nationalist’s niece, Marion Marechal, said on TF1 television.

Green leader Yannick Jadot and Republicans candidate Valerie Pecresse, who both got almost 5%, called on their supporters to vote for Macron, though Pecresse accused the president of fueling support for Le Pen.

“By sparing the extremes and avoiding democratic debate, Emmanuel Macron played with fire and made France take a an enormous risk,” Pecresse said in her concession speech. “We could all pay the price.” Melenchon told his supporters not to give “one single vote” to Le Pen, though he didn’t endorse Macron.

A lot now depends on the presidential debate set for April 20.

Le Pen is known for her disastrous performance when confronting Macron during the 2017 campaign and has been working with advisers to ensure she’s better prepared this time around. But the president is a formidable opponent, known for his photographic memory and ability to avoid hard questions with long, convoluted answers.