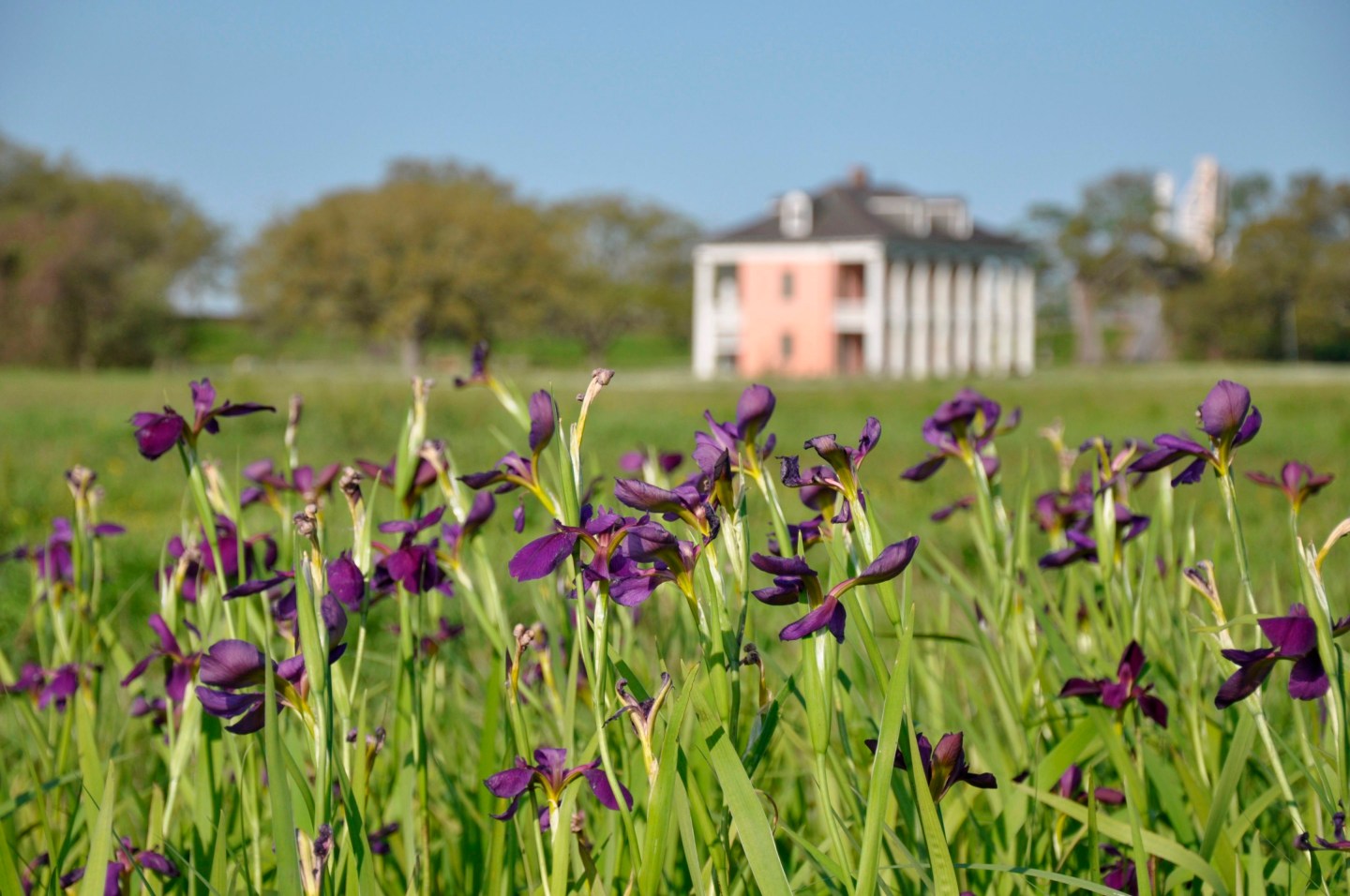 This March 29, 2021, photo provided by Paul Christiansen shows Louisiana iris on the location of the Battle of New Orleans and of the small historic Black neighborhood of Fazendeville, founded about 1870 for recently emancipated Blacks and torn down in the mid-1960s to expand a national park in Chalmette, La. The Malus-Beauregard House is in the background.
Paul Christiansen—AP Images

NEW ORLEANS—Nearly 60 years ago, a historic Black community founded as a home for newly freed slaves was demolished to expand a national park commemorating the Battle of New Orleans and Civil War casualties. Now park rangers and iris enthusiasts believe they may have found a botanical reminder—Louisiana iris and African lilies that the village’s residents may have planted.

Woody Keim, a great-great-grandson of the community’s founder, says he thinks it’s a tragedy that Fazendeville was torn down and wonderful that the dark purple iris and white and pink crinum lilies have been discovered.

“Even though the government tried to erase this village, there’s still life raising its little flowery head to show there once was a community here,” he said.

The flowers were first noticed last spring, nearly 60 years after the tiny community was expropriated to join the national park’s two sections. One part was the land where the Battle of New Orleans was fought; the other was a national cemetery where about 7,300 Union soldiers and sailors rest with later U.S military members.

“We may never know for certain” that the flowers were planted by residents, but it seems very likely, said Gary Salathe, who created a group to rescue native irises and who first noticed those on the battlefield.

The community, called “The Village” by people who lived there, was founded around 1870 by Jean-Pierre Fazende, a grocer from a family prominent in the social class known as free people of color, said Bill Hyland, the official historian for St. Bernard Parish, where the national park is located southeast of New Orleans along the Mississippi River.

Fazende wanted to give recently freed slaves a place to live. So he subdivided an inherited strip of land that was wide enough only for a single row of houses into 33 lots for a “freedmen’s colony.” The land eventually included 30 homes, a church, bars, a grocery store, and a school that was used at night as a dance hall.

“Like so many people of his class, he understood that the transition of the enslaved to freedom would be a long and arduous process,” Hyland said.

For decades families lived and worked in the small community built where American forces had defeated the powerful British military on Jan. 8, 1815.

In the early 1960s, with an eye toward unifying the national park in time for the battle’s 150th anniversary in 1965, the park service tried to buy the land. Owners refused. Eventually, Congress approved expropriation and the community was demolished.

“I think it’s a tragedy that a community that had been there for close to 100 years was not considered as important as an event that took place over five days in 1815,” said Keim, who was about 5 years old when Fazendeville was erased and grew up in a white neighborhood, not knowing he was related to free people of color.

Homeowners were paid about $6,000 at a time when new homes in the area cost $16,000, according to a 2014 article in the “64 Parishes” magazine published by the Louisiana Endowment for the Humanities. In later years, the park service addressed the expropriation in an article on its website.

“The choice to preserve one history sacrificed another,” the park service said. “While we may be able to better visualize the experience of soldiers during the War of 1812 as a result of this choice, it leaves us less able to appreciate the struggles and triumphs of later generations, and less aware of the complex layers that make up our shared history.”

In 2010, a marker commemorating Fazendeville was erected near the battlefield road.

In February of last year, Salathe and other members of his Louisiana Iris Conservation Initiative were planting a small group of blue iris in another part of the park. Salathe, whose group seeks to save Louisiana iris from areas slated for development and plant them in visible spots in nature preserves and parks, noticed long, tall leaves growing in the grass a distance from the road. They looked like iris. A closer look confirmed it. He and park rangers went back a month later when the iris bloomed and got two surprises.

First, they were dark purple, not the better known light blue iris that is the state flower. Then came a more startling discovery—crinum lilies. Volunteer Paul Christiansen recognized them as a species from Africa, possibly brought by enslaved people, that could not have been growing wild there.

“They would have had to be planted by people,” he said.

The group then found the slight depression where Fazendeville’s road once ran. The stands of iris all were on the side where houses once had stood, ending about where the back yards would have ended, Salathe said.

Salathe said he asked permission to move some of the iris and lilies to an area where they can be more easily seen. The park is considering such a display, said park ranger Kim Acker.

Keim learned of his mixed-race heritage when he began researching his ancestry online about a decade ago.

“I am proud to be part of the gumbo of Louisiana culture that my family has been part of for the last 300 years,” he said.