Oil is entering a New World Order. Here are the big winners and losers 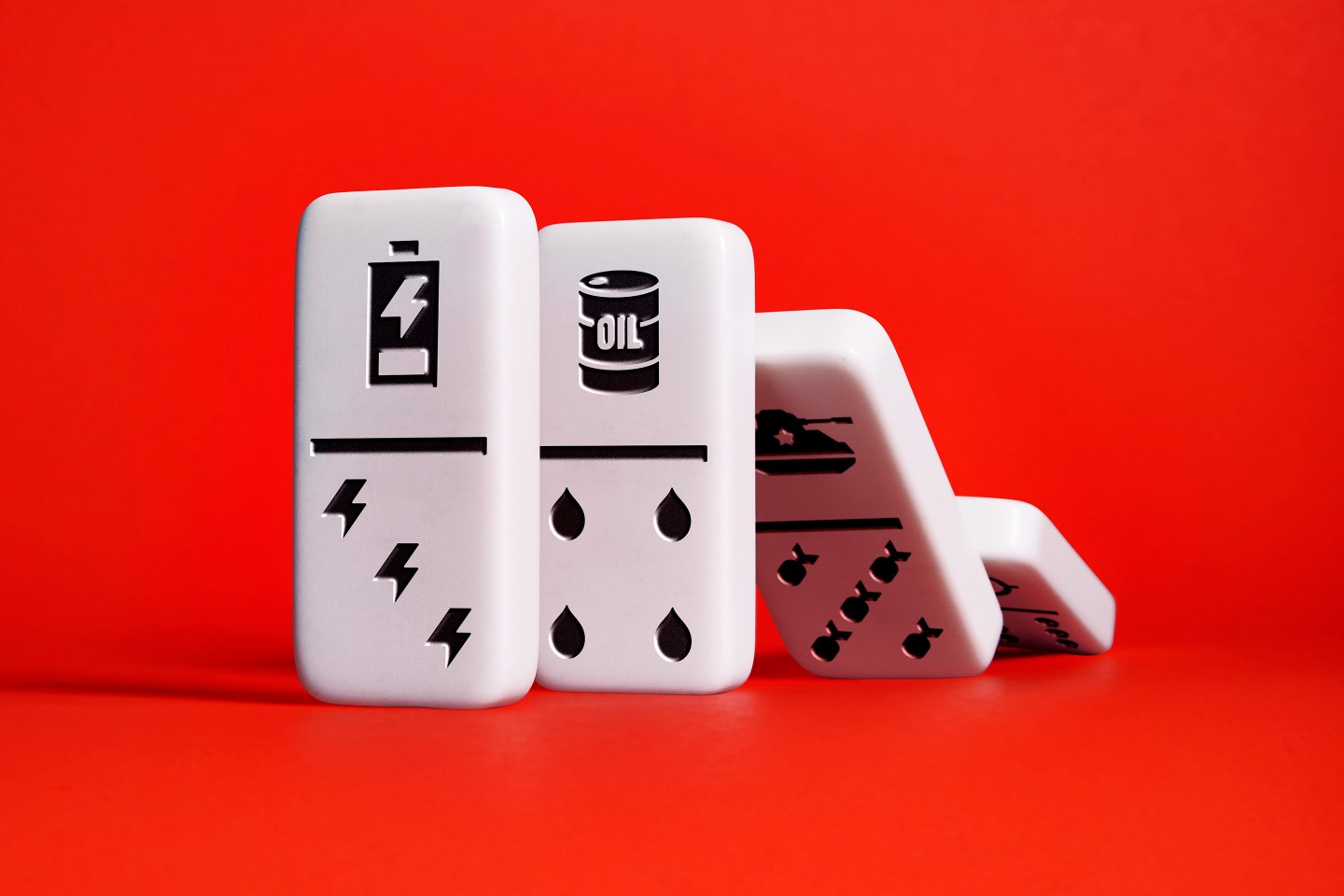 For a global business that works with miners and farmers, witnessing the ravages of human suffering and even war is too often part of the job. Still, nothing could quite prepare Yara International CEO Svein Tore Holsether for what he woke to on Feb. 26—or, for that matter, what would come next.

Yara, a 117-year-old Norwegian fertilizer giant, operates in more than 60 countries. For decades, Yara has had a large and fruitful presence in both Ukraine, a major wheat exporter, and in Russia, a key supplier of the potash and phosphate needed in Yara’s fertilizer production. On day three of Russia’s invasion of Ukraine, a Russian missile blasted into the headquarters of Yara Ukraine in Kyiv.

No Yara employees were injured in the early-morning air strike, but Holsether was still shaken days later when he spoke to Fortune. War, he said, “becomes quite close when you see the office building, with the Yara sign on it, and a big hole. That’s really scary.”

Like companies in a wide range of industries, Yara felt the impact of the invasion in another way, too: rising energy prices. As Russian missiles flattened Ukrainian apartment blocks, hospitals, and businesses in early March, shock gripped the world’s capitals and panic tore through global energy markets. Incensed, the European Union, which spent €108 billion ($119 billion) on Russian energy imports last year, vowed to slash by two-thirds its dependence on Russian fossil fuels by year-end.

Plans for an outright EU ban on Russian oil eventually stalled. But oil giants BP, Shell, TotalEnergies, and Exxon Mobil effectively created an embargo anyhow when they announced plans to pull out of Russia, ending decades of investment. The International Energy Agency (IEA) now warns that, beginning in April, “3 [million barrels per day] of Russian oil output could be shut in as sanctions take hold and buyers shun exports.”

These tectonic shifts are creating a supply crunch, pushing up the price of oil and natural gas everywhere. Businesses across Europe, Yara included, shut down operations in early March to save money as energy bills skyrocketed: Europe’s natural gas benchmark, the Title Transfer Facility, spiked to a record high above €227 per megawatt on March 7 before correcting. “That’s an oil price equivalent of $600 per barrel. We were running at huge negative margins,” Holsether explains, adding production costs for ammonia rose nearly 20-fold on prewar levels.

Says Jeff Currie, head of commodity research at Goldman Sachs: “This is the biggest upheaval for commodities markets since 1973”—the year of the OPEC oil embargo.

The Russian invasion of Ukraine has precipitated Europe’s worst humanitarian crisis since World War II. Thousands are dead already. Cities like Mariupol and Kharkiv lie in ruins. More than 10 million Ukrainian refugees have been forced from their homes. The scale of human suffering is incalculable.

Vladimir Putin’s war will also have a wide-ranging and long-lasting impact on the global economy. And the surge in oil and gas prices is just the start. The ripple effects are likely to push up the cost of all commodities, making products ranging from bread to electric vehicles more expensive.

Economists, policymakers, and business leaders warn that as long as Russia—the world’s biggest natural gas exporter, as well as its No. 2 crude and No. 3 coal exporter—keeps bombing Ukraine, businesses and homeowners the world over will feel it. The war could whack a full percentage point off global GDP growth this year, the OECD calculates, and push the global inflation rate up by a further 2.5%. Goldman Sachs, meanwhile, says every $10 hike in oil prices wipes out billions in economic growth. Its analysts say there’s a 40% chance the Ukraine invasion will sink the U.S. into recession. The odds are even worse for Europe.

Heading into the summer driving season, forecasts for oil prices are all over the place. Barclays, BofA Securities, and Rystad Energy, the Oslo-based energy consultancy and research firm, all say their worst-case scenario—think NATO being drawn into the bloody conflict—is Brent crude, the global benchmark, nearing $200. That upper-range assessment is in the “possible … but not particularly likely” category, says Bjørnar Tonhaugen, head of oil markets at Rystad. The reason: “Russia’s oil exports are basically too big to fail,” he says.

That fact is hardly reassuring the global energy markets. Brent is up more than 50% so far in 2022, and the price of regular gasoline in the U.S. has risen nearly 30%. Oil traders, meanwhile, are watching for two big developments in the coming weeks: Will Russia’s daily exports of 5 million barrels find new buyers in, say, India and China? And, if so, will other exporters—the Middle East, maybe—turn around and begin to sell to Europe and North America? Such a global recalibration of supplies, it’s hoped, would stabilize prices and save the planet from a 1970s-style supply shock.

One thing is for sure: Every major energy crisis yields new economic winners and losers. Here’s what the experts we surveyed are expecting.

The ruble has collapsed. Sanctions are hobbling Russia’s petroleum-based economy. More than 400 multinationals have pulled out of the country or have curtailed operations. And war has achieved the unthinkable: It has unified the EU in resolving to break its energy dependence on Moscow. Rystad estimates that sanctions will cut global demand for Russian oil and liquid petroleum products by 350,000 to 1 million barrels per day this year.

“All major energy importers are losers,” says Steffen Hertog, a Middle East expert and professor of comparative politics at the London School of Economics. For Exhibit A, look no further than the EU. Its commitment to weaning itself off Russian energy will be a rocky process that in the short term will mean higher electricity and petrol prices, and lower growth. Count on a 0.7% hit this year to growth, says BofA.

The 2008 oil crisis, in which Brent hit a high of $146 per barrel, tested Americans’ love affair with the automobile. As fuel prices remained elevated and the economy sputtered, the number of miles Americans drove in their cars fell for five straight years. “We just have to accept the fact that we won’t be driving as much in our cars, on vacation, this summer,” Tonhaugen figures. On the flip side: Climate hawks would cheer the reduced emissions.

Last autumn, on the sidelines of the COP26 climate summit, Yara CEO Holsether warned the world that spiking energy prices could lead to a global food crisis. One month into Russia’s invasion of Ukraine, the situation is beyond his worst fears with wheat, corn, and barley prices soaring. The war, and its impact on global energy prices, could undo the progress the world’s made in lifting hundreds of millions out of hunger and poverty, Holsether warns. He calls it the “catastrophe on top of the catastrophe,” echoing the words of David Beasley, executive director of the United Nations World Food Programme.

The new geopolitics of oil can best be described as “down-is-up,” a policy shift happily welcomed by the likes of Venezuela’s President Nicolás Maduro. He hasn’t backed down in his support of Putin. Still, for the first time in years, Maduro met with a U.S. delegation in the early days of the war to talk, yes, energy. “It is definitely good news in the short run for oil exporters, including ones that might be able to put additional oil on to the market through softened or abrogated U.S. sanctions like Iran and Venezuela,” Hertog reckons. As for Iran, at these oil prices, “it’s making a lot more money than it was before,” points out Ellen Wald, an energy consultant and author of Saudi, Inc. Iran could use the current economics to play hardball as it negotiates to win a reprieve from sanctions, and fully return to the export market.

Germany, among others in Europe, has pulled an about-face on dirty coal. In March, the eurozone’s biggest economy called for the creation of strategic coal reserves to keep the lights on. Another winner in Europe in the coming years: liquefied natural gas. Europe’s push to import LNG as a Russian gas substitute will make the EU the world’s fastest-growing LNG market, BofA Securities calculates. Across the Atlantic, fracking could once again be king. The Biden administration wants U.S. shale producers to boost production to meet the shortfall of the 700,000 barrels per day of Russian crude that’s now banned. In March, shale producers responded by drilling more wells, though rig activity remains below pre-pandemic levels.

In the short run, ESG investors will look in horror on governments cozying up to shale and coal. But longer term, things are looking sunnier. The war, and the resulting surge in fossil fuel prices, is already proving to be an accelerator for such net-zero technologies as carbon capture and storage (CCS) and green hydrogen. Rystad forecasts CCS investments will quadruple over the next three years to top $50 billion. And the EU has set an ambitious 2030 target to replace nearly half of Russian gas with clean hydrogen. The Biden administration, meanwhile, has committed $9.5 billion to boost hydrogen power this decade.

In March, the IEA published a 10-point plan to spell out how the world could quickly cut 2.7 million barrels of oil from its daily consumption. Top of the list? Work from home three days a week, and forgo business travel when a Zoom call will do. That’s something we all know how to do by now.

This article appears in the April/May 2022 issue of Fortune with the headline, “Oil’s New World Order.”