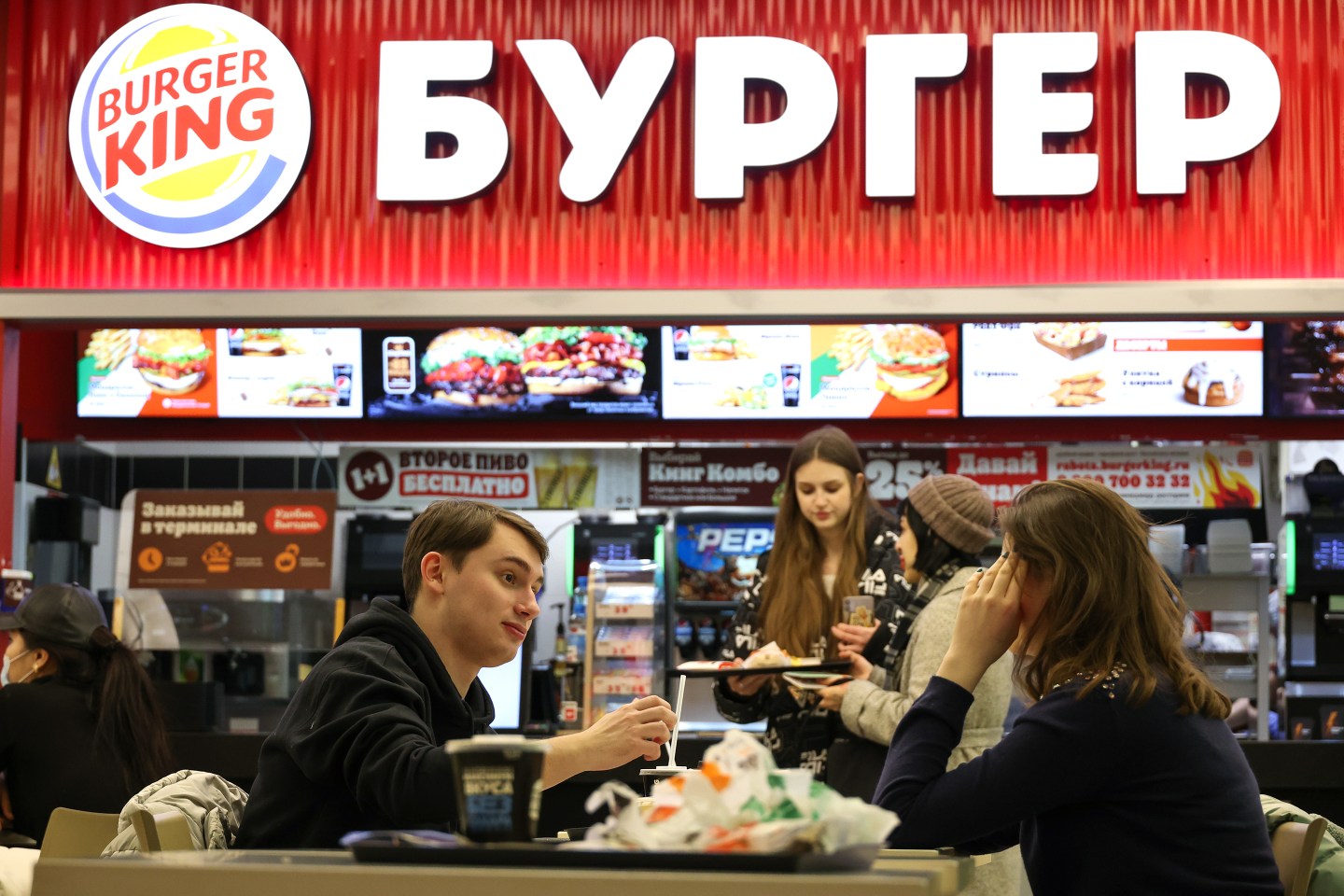 Customers at a Burger King in Moscow.
Vyacheslav Prokofyev—TASS/Reuters

Amid the stampede out of Russia by multinational corporations—more than 400 Western companies in under four weeks—many have chosen to stay put, claiming that their legal structures in the country make it logistically impossible to withdraw.

The latest example is Burger King, which has about 800 restaurants in Russia.

When it opened its first outlet in 2010 in Moscow’s Metropolis shopping mall, it trumpeted Russia as “an exciting, active market with a vibrant economy”—hardly reflecting a country now conducting a devastating bombing campaign in Ukraine.

Its Russian partner, restaurant operator Alexander Kolobov, cooed then that he was “very excited to be part of a leading global brand.”

But 12 years on, that relationship has turned toxic—leaving Burger King open for business in Russia.

In a letter last week, Burger King’s parent company, Toronto-based Restaurant Brands International, or RBI, tried to explain the complications to their employees.

RBI’s international president, David Shear, said it had suspended its marketing and supplies to Russia, and redirected its revenues from the country to humanitarian organizations helping Ukrainian refugees.

Shutting down was impossible, however, he said in the letter, since its Russian partner, Kolobov, insisted on keeping Burger King restaurants open; RBI holds a 15% stake in the long-term franchise agreement.

“We contacted the main operator of the business and demanded the suspension of Burger King restaurant operations in Russia,” Shear wrote. “They have refused to do so.”

Kolobov told BBC News he did not have the “authority or power” to shut, claiming that the decision “must be taken by all shareholders, considering [the] impact it may have on the employees and their families.” He said about 25,000 people worked for Burger King in Russia.

Burger King is hardly the only major Western company to stay open, arguing that it was legally unable to suspend or shut operations. So, too, has Britain’s M&S, General Mills, and several others.

Just like Burger King, Subway released a statement last week explaining that it also is tied up in a franchise agreement that makes pulling out of Russia impossible; its 450 or so Russian restaurants, it said, are “independently owned and operated by local franchises, and managed by an independent master franchisee.”

It said it would direct revenues from its operations there to aiding Ukrainians, about 10 million of whom have fled their homes since Russia invaded on Feb. 24.

But Subway’s and Burger King’s arguments have fallen flat, among those pushing for Western companies to withdraw.

“These are empty, cynical messages,” Yale School of Management professor Jeffrey Sonnenfeld told the Los Angeles Times last week. He called the excuse about franchise agreements “a cover for cowardice.”

Sonnenfeld has kept a running tally of companies withdrawing, suspending, or staying in Russia—calling out those who have refused to pull out of the country in protest.

In a piece last week in Fortune, he and Steven Tian of Yale’s Chief Executive Leadership Institute said their running list has pushed CEOs to withdraw from Russia, for fear of being seen as benefiting from a country bombing civilians. “As we watch the slaughter of thousands of innocent civilians, economic blockades are surely better than bombs and bullets,” they wrote.

Indeed, the horrific scenes of violence have hugely accelerated companies’ withdrawal from Russia.

“The power of the media in telling the story of this war has really galvanized companies,” says Bruce Haynes, managing director of Sard Verbinnen, a strategic communications firm in Washington, D.C., who has consulted for about 24 companies in the past month over decisions concerning their Russia business.

He says dozens of companies pulled out immediately after gruesome photographs of dead Ukrainian civilians appeared on the front pages of U.S. newspapers on March 7. “It was a wake-up call,” Haynes told Fortune on Monday.

For each company, he says, the decision has come down to whether remaining in Russia is riskier than pulling out.

He says it is not a clear-cut decision for some U.S. executives, who fear that their production facilities or assets in Russia will be seized by the Russian government—as President Vladimir Putin has stated he intends to do—and perhaps even used to bolster its military.

“It is both a business question and a moral question,” he says.

To many, the reputational risk to remaining in Russia depends on whether they have direct customers or are deep in a supply chain. “If you are a brand that is on a shelf, in a store, that can be subject to a consumer boycott, the reputational risk is high, particularly in the European Union and the U.S.,” Haynes says.

Subway is learning just how damaging not cutting its ties with Russia might be.

The Twitter hashtag #boycottsubway has taken off in recent days, as consumers voice their outrage over the company’s decision to remain in Russia.

“It’s so disappointing that Subway is spreading Ukrainian blood on their footlong sandwiches,” Democratic Party fundraiser Jon Cooper tweeted last week to his 927,000 followers. “Who agrees we should boycott Subway until they pull out of Russia?” he said, with a raised-hand emoji.

Haynes says that among his clients, those consulting him because of their decision to remain in Russia—rather than withdrawing—are “rare.”

He notes that those who remain are wrestling with complicated decisions—including the sense that if they pull out, they will not easily reenter the market, once the war is over and Putin leaves.

“I’ve yet to have a single CEO tell me, ‘We can’t lose the revenue,’ but it could be an unspoken concern,” he says.

Burger King, Subway and others say they can't pull out of Russia