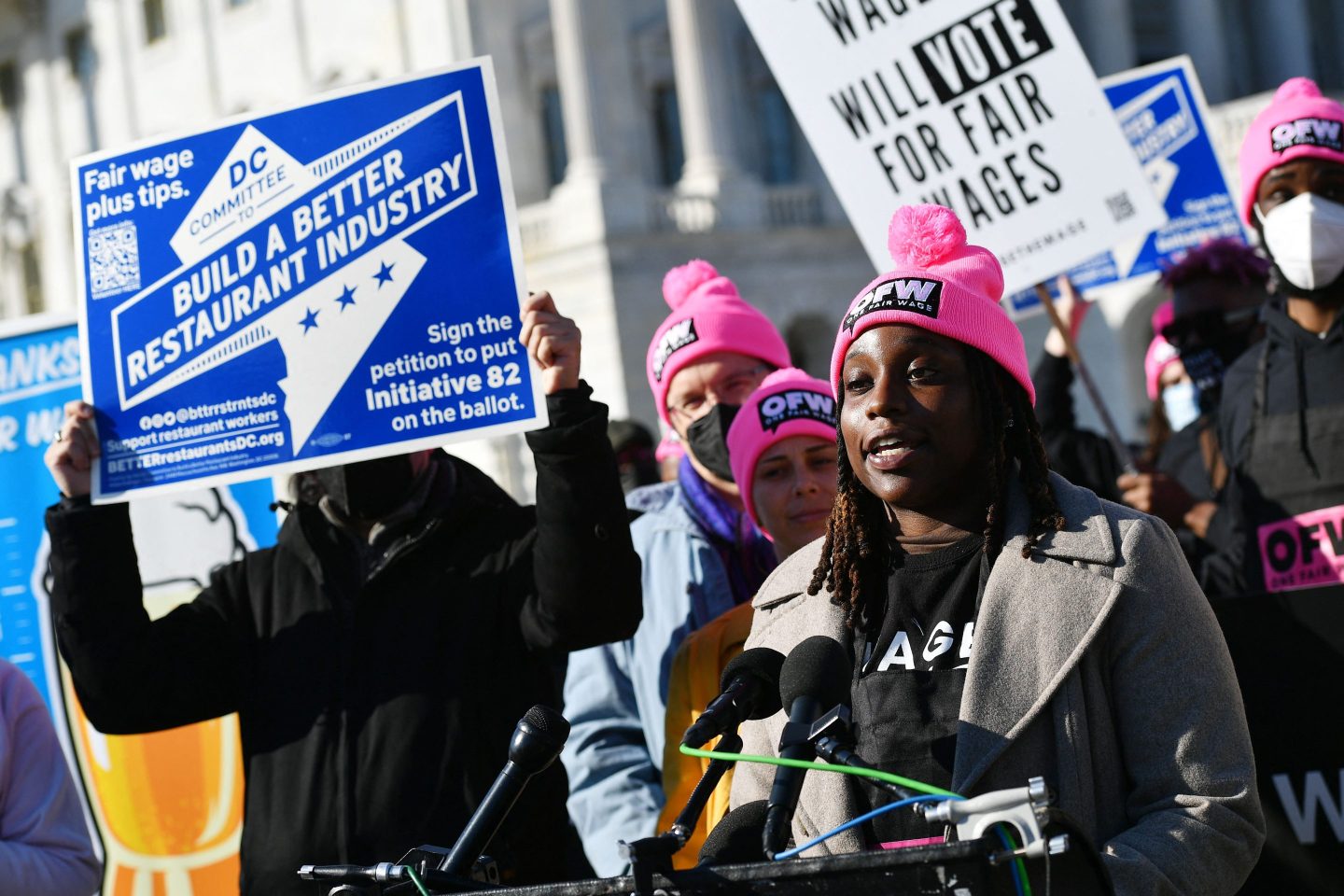 Restaurant worker Ifeoma Ezumaki speaks during a rally to call for a full minimum wage in her industry, at the U.S. Capitol on February 8, 2022. "We need more consumers with more money in their pockets, and the simplest way to get there is to raise the minimum wage," writes Morris Pearl.
Photo by MANDEL NGAN/AFP via Getty Images

Earlier this month, minimum wage advocates announced a massive $25 million campaign to raise the minimum wage and eliminate the subminimum tipped wage in 25 states, with the goal of getting both done by the United States’ 250th birthday in 2026. This campaign couldn’t have come at a more important time. Record-breaking inflation and a 12-year-stagnant federal minimum wage have combined to leave countless working Americans struggling to afford their most basic needs despite working full-time jobs. Congress must act now to raise the minimum wage and lift millions of working Americans out of poverty.

The federal minimum wage of $7.25 an hour, or about $15,000 a year for a full-time employee, was already unacceptably low in 2009 when it was introduced alongside the iPhone 3 and the movie Avatar. Factor in inflation over the years, particularly the record 7% increase in prices over the last year alone, and you’re left with workers who are unable to afford gas at the pump, food at the grocery store, or their monthly rent.

These workers needed a $15 minimum wage years ago; and in fact, that popular benchmark target is no longer enough for most workers. Before 2020, it was estimated that two working adults in a family of four both needed a wage of $16.54 to stay afloat. Now, it’s estimated that a family of the same size would need $17.70 an hour for each adult.

Despite lots of discussion of The Great Resignation leading to increased worker empowerment and higher wages, many workers, especially those in small communities with few employers, have been left behind. Without many options, too many workers are still earning barely enough to survive and falling farther and farther behind with each passing week, as inflation eats into the purchasing power of their already meager wages. This is especially true for millions of tipped workers in America, who—thanks to a legal carveout that allows them to be paid just $2.13 an hour—are significantly more likely to live in poverty than even other low-wage workers.

Back in the 1930s when FDR created the minimum wage, he declared that it would be a “living wage” designed to provide the fully employed worker with enough to get by on. The unfortunate reality is that his idea of a “Fair Day’s Pay for a Fair Day’s Work” no longer applies to those who make the federal minimum wage in the United States. A mere $15,000 a year is not enough to live on anywhere in the country. In most states, you need nearly double thatto get by.

This isn’t just an issue for low-wage workers—it’s a problem for the entire country. Everyone, even wealthy individuals like myself, will begin to feel the pressure if wages remain so low that Americans cannot keep the engine of the economy moving. Consumer spending makes up nearly 70% of our economy. If we leave a significant portion of our population making so little money that they can barely afford their basic needs, much less any other products or services, businesses and the economy as a whole are going to suffer as a result. We need more consumers with more money in their pockets, and the simplest way to get there is to raise the minimum wage.

It’s clear that the minimum wage should have not only been increased years ago, but also indexed to inflation to stop political gridlock from holding the livelihoods of millions of workers hostage. This isn’t anything new. Programs like the Child Tax Credit, tax brackets, and even political donation caps are indexed to inflation. So why can’t we add the federal minimum wage to the list?

It shouldn’t take a massive investment by outside groups to raise the federal minimum wage, and workers shouldn’t have to rely on state-level increases to make up for federal inaction. It’s time for President Biden and Congressional Democrats to step up and give millions of Americans a raise. With every passing day of rising inflation making low-wage workers poorer, there’s no time to waste.

Morris Pearl is the chair of the Patriotic Millionaires, a former managing director at BlackRock, and co-author of Tax the Rich!