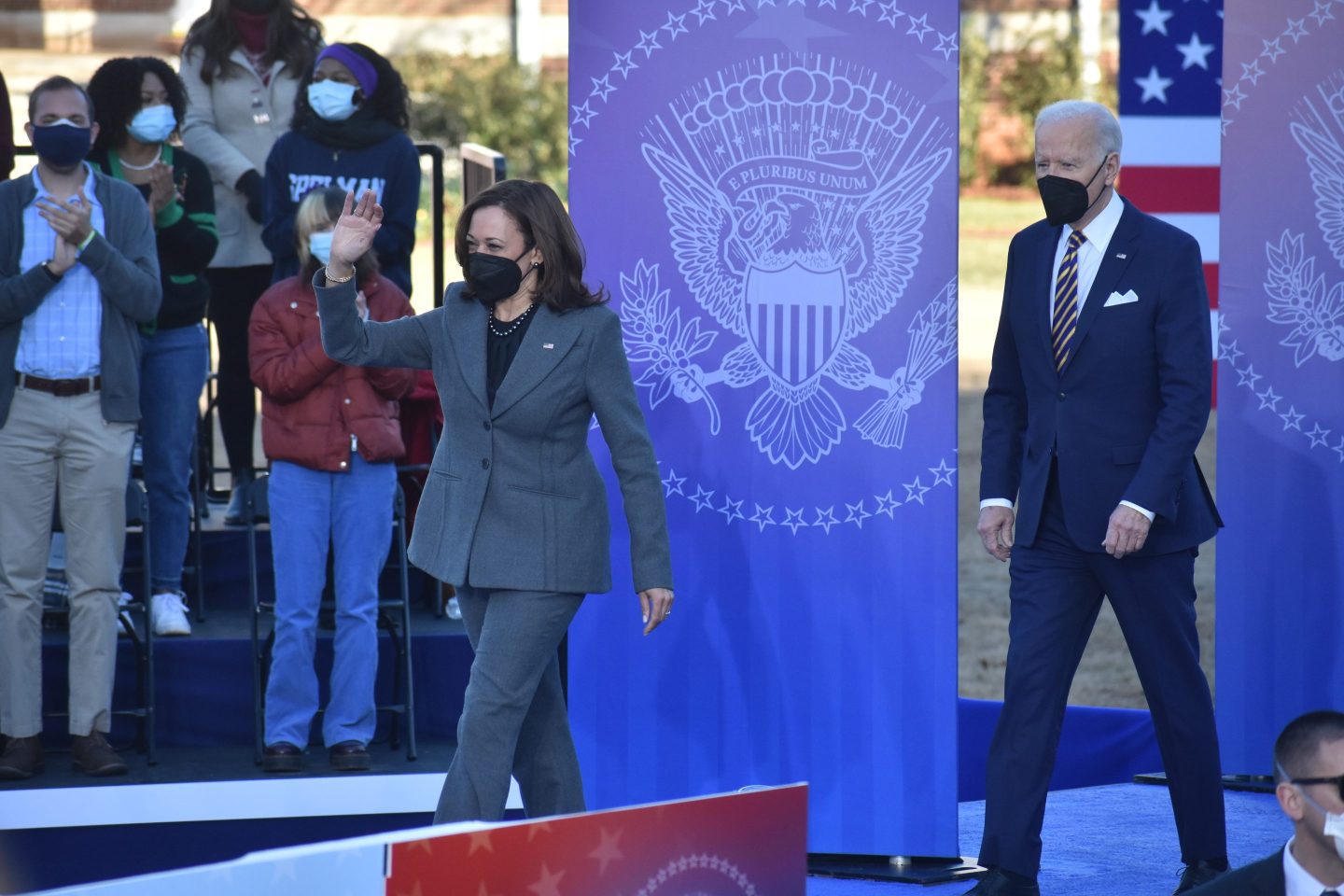 Vice President Kamala Harris and President Biden at an event to support voting-rights legislation in Atlanta on Jan. 11, 2022. By attacking Biden and Harris and each other, activists "have undercut their natural allies in the sweepstakes for funding, baffling CEOs and politicians alike with a kaleidoscope of confusing and even false messages," writes Jeffrey Sonnenfeld.
Kyle Mazza—Anadolu Agency via Getty Images

With the White House and Democrats in Congress conceding anticipated defeat on the eve of their self-imposed deadline for legislation to protect voting rights, the urgent, dysfunctional blame game has already begun.

In addition to blaming right wing “Big Lie” promoters of false election fraud, cynical media together with voting rights activists on the left have paradoxically adopted the false but well-worn scripts from the voter restriction-oriented right, condemning the business community as lacking backbone and peddling woke cliches.

Adding to the crossfire is a volley of “Biden Bashing.” President Biden’s full-throated attack on Senate voting rights antagonists was blunted by headline-stealing from disenchanted fellow voting rights who dismissed his historic visit to Atlanta last week as a “photo op” and called it “too little too late.”

In fact, these activists can find fault everyone except with themselves. They have undercut their natural allies in the sweepstakes for funding, baffling CEOs and politicians alike with a kaleidoscope of confusing and even false messages, putting forth colliding appeals and contradictory petitions in grandstanding for support and attention.

Many were disappointed when activist voices snubbed the packed Biden address. The crowd included such civil rights legends as 89-year-old Rev. Andrew Young, 80-year-old Rev. Jesse Jackson, and 69-year old Rev. Al Sharpton, who led the crowd in giving Biden several standing ovations. This may have been the last reunion of these heroic Martin Luther King colleagues, and it took place in the Congressional district long represented by their late partner John Lewis, on the eve of MLK Weekend. Their snub also undermined Vice President Kamala Harris, the first Black and first woman vice president in history, in this valiant last-minute voting rights push.

Similarly damaging was the recent friendly fire in the form of activists’ support for a misleading, inflammatory report from Citizens for Responsibility and Ethics in Washington (CREW) titled The Corporate Insurrection: How Companies Have Broken Promises and Funded Seditionists. This inaccurate report was endorsed eagerly by attention-seeking voting activists eager to feed media narratives in the New York Times and the Financial Times. The Hill cited an equally sensationalist report by Accountable.US charging that Fortune 500 firms are “quietly resuming” their political giving to GOP congressional election objectors.

These reports recklessly combined apples and oranges by confusing the pledged halt to individual GOP congressmen with apparent dreams of defunding the entire Republican Party—which of course no business pledged to do.

As The Wall Street Journal accurately reported, a day before the insurrection, on January 5, 2021, I hosted an emergency meeting of several dozen major CEOs. At that time, that large group of over 100 CEOs unanimously voted to encourage fellow chief executives to pledge a temporary moratorium on specific, individual congressional “objectors” who failed to vote to affirm the certified Electoral College ballots. These CEOs kept their pledge, and ultimately several hundred companies joined them in pledging not to not make donations to the 147 objectors.

Our research team and I have gone over the original Federal Election Committee filings in each quarter, and we’ve reported remarkable adherence to these pledges—in the 80% to 85% range. We have published that evidence to challenge the data-free speculation across the political spectrum. Presently, companies are 79% compliant, while dozens more have dropped political contributions altogether. It’s also worth noting that, much to the distress of anti-business idealogues, roughly 80% of both Democratic and Republican Congressional funding comes from individual donations powered by new digital direct-giving platforms, not corporate donors.

Despite the finger-pointing, the total amount of corporate donations to objectors that my team attributed to broken pledges is $6 million—not even 1.5% of aggregate Congressional campaign support. It should also be noted all 93 of the incumbent “objector” candidates have raised less than they did in their prior campaign. But the prevailing false narratives about faltering corporate commitment can become self-fulfilling as nervous boards looking for affirmation instinctively benchmark against what they think peer companies are doing.

Too many voices, not enough unity

The source of this misguided pathological activity is that there are too many voting rights groups. Genuine, knowledgeable and credible experts from longstanding, venerable organizations such as the NAACP Legal/Defense Fund; the Antidefamation League; the Southern Poverty Law Center; the League of Women Voters; the Urban League; and Concerned Black Clergy of Greater Atlanta, as well as from newer noble institutions such as the expert Brennan Center for Justice; Democracy Docket; the Black Economic Alliance; Black Voters Matter; Fair Fight; and Leadership Now, are all getting drowned out by upstarts that have been jumping into the opportunity.

In total, our research team and I have identified 188 separate voting rights advocacy organizations actively working on voting rights at the national, state and local levels. Even more concerning, when we examined each group’s registration, fundraising, tax and staffing records, we found that 95 of those groups were established in the last five years, while 26 were created in the last year alone. As we note in a recent report, although we estimate the spending allocated to voting rights across these 188 groups exceeds $300 million over the last year, well over half of the groups have either staffs of fewer than five full-time individuals or budgets of less than $1 million.

These findings suggest that instead of using their considerable firepower to trumpet and leverage the good news, these balkanized groups have instead fractured the field by pursuing divergent messages and contradictory agendas, inadvertently set up circular firing squads, undermining unity, siphoning resources from credible expert activist voices, and detracting from much needed outside support.

I have heard from many CEOs, government affairs professionals and policymakers that they’ve become confused. On the one hand, they hear the bipartisan No Labels group advising them that voter suppression fears are overblown, based on record voter turnout in the past two elections, and thus focus ought to be on bipartisan reform of the Electoral Count Act. Meanwhile groups that helped secure that recent historic voter turnout such as Fair Fight, Black Voters Matter, and the non-partisan Brennan Center present alarming evidence of reduced access and partisan preemption of county voting officials, with legislation targeting 49 states and already becoming law in 19 states.

In stark contrast to this pervasive confusion on the side of protecting voting rights, the focus on the far right has been tightly concentrated in a single advocacy group: Heritage Action, a spinoff of the Heritage Foundation. Recently, Heritage Action’s executive director, Jennifer Anderson, claimed that that organization alone had drafted most of the nation’s most restrictive voting legislation in Republican controlled statehouses, as part of a tightly coordinated network.

Unsurprisingly, the alphabet soup of voting rights advocates working at cross purposes has confused the general public as well. In a Morning Consult/Politico survey taken in June 2021, 45% of all voters supported a change to the Senate’s filibuster rules, with 17% undecided and 38% opposed. However, support for changing filibuster rules actually decreased by the time of Morning Consult’s January 8-9 survey, which found that only 37% of all voters support a change to filibuster rules, while 27% are now undecided and 36% are opposed.

In other words: While the proportion of voters opposed to a filibuster change has essentially remained unchanged, more voters have gone from supportive to undecided over the last year, likely discouraged by the unrelenting drumbeat of self-defeating negative messaging. Nevertheless, the same Morning Consult poll from last week found that the majority of voters still strongly back clarifying succession rules by reforming the Electoral Count Act of 1887, with 55% of voters in support, 25% undecided, and 20% opposed. So the moment for action has not passed, even if the window is rapidly closing. But some important steps need to be taken to ensure the same mistakes are not made twice.

On the whole, CEOs are engaged and impressed by noble experts, but very worried about the clashing advocates, parochial activists, and some who are plain opportunists latching on to the moment. They also wonder: Where is everyone else? Where are the clergy that used to lock arms and march for progress together? Where are the trade union leaders, the professional associations, the online employee interest groups, the campus voices, the pension funds and especially the institutional investors—the owners of the CEOs’ companies who control 80% of public equity? Yes, all those groups who so often clamor for stakeholder governance have gone mute on the issue of ballot access.

While some voting rights activists are in the field, fighting state-by-state, it is too tempting for other clubby, D.C.-oriented voting advocates to target a White House distracted by many other challenges, including the pandemic, economic disruption, social justice, and threats from China and Russia; or to attack GOP tactics and centrist Democrat holdouts in the Senate as well as CEOs. But this insular, expensive, vast and fractious network is not blameless. As cartoonist Walt Kelly’s Pogo quipped, inverting Commodore Perry’s famous declaration, “We have met the enemy and he is us.”

Perhaps the Bauhaus mantra “less is more” applies, and there should be some consolidation through mergers and peer ratings of impact. From 1997 through 2002, I facilitated the National Dialogue on Cancer, co-chaired by President George H.W. Bush and Senator Dianne Feinstein, a consortium to unify 50 rival cancer-fighting organizations battling over prevention, early detection, environmental causes, equitable treatment access, and basic research. Perhaps the fractious voting rights elements can find common ground and fortify their efforts. This may mean spending more effort making new friends and spending less time looking for external scapegoats.

Jeffrey Sonnenfeld is a senior associate dean and the Lester Crown Professor of Management Practice at the Yale School of Management and author of Firing Back: How Great Leaders Rebound After Career Disasters (Oxford University Press). Follow him on Twitter.