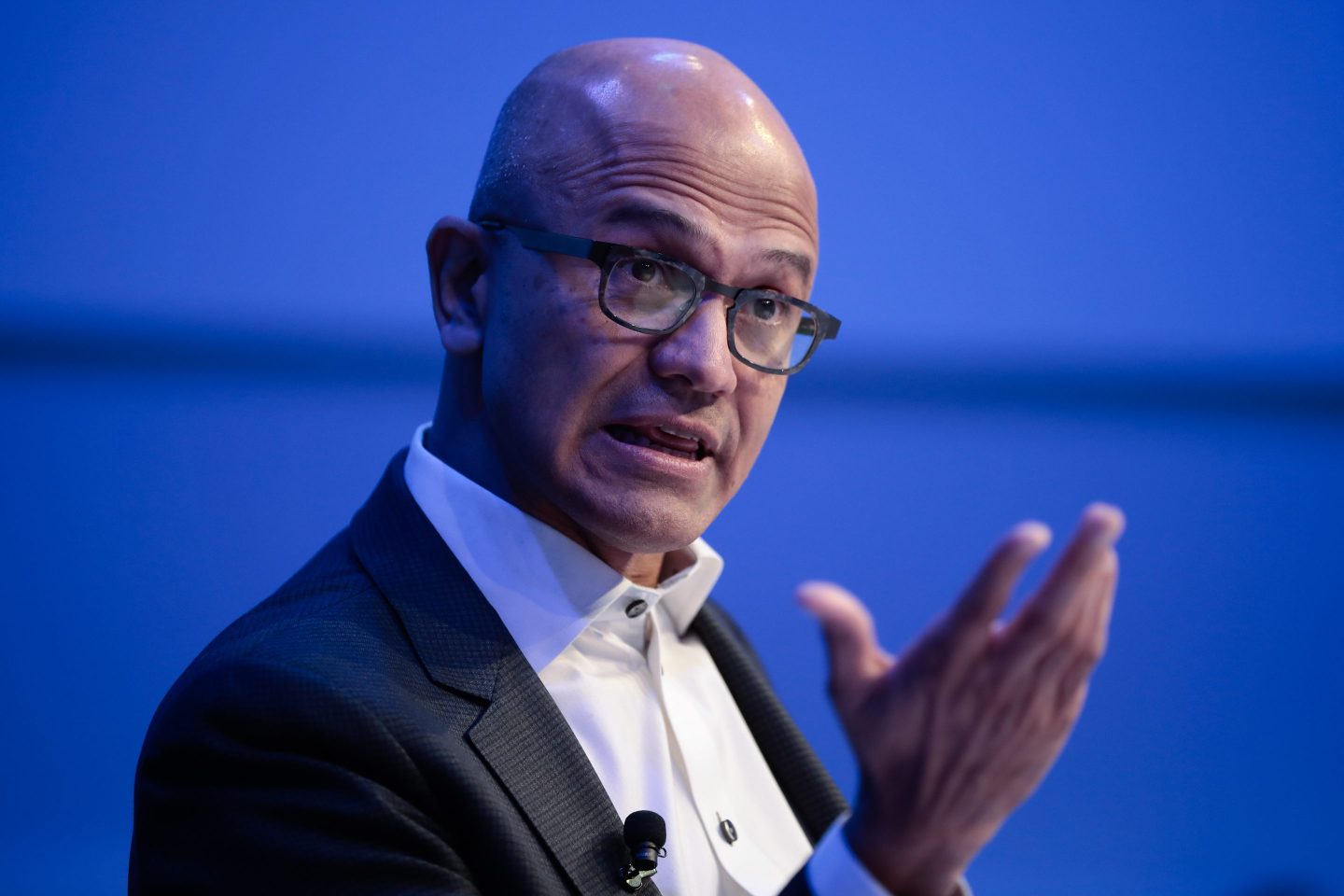 “Every person, organization, and even society reaches a point at which they owe it to themselves to hit refresh—to reenergize, renew, reframe, and rethink their purpose.”
— Satya Nadella, Hit Refresh: The Quest to Rediscover Microsoft’s Soul and Imagine a Better Future for Everyone

When Satya Nadella was named the CEO of Microsoft, in February 2014, one of his first acts was to ask all the top executives at the famously combative software company to read Marshall Rosenberg’s Nonviolent Communication, a book about how to communicate and collaborate effectively using compassion and understanding rather than competition and judgment.

With that request, Nadella signaled to the company’s leaders that he wanted to make a big change in the culture of the world’s largest software company. Bill Gates, the company’s longtime CEO, had been known for berating employees. Steve Ballmer, who succeeded Gates, made cringe-worthy YouTube bait with his on-stage screaming and sweaty-faced antics at company product launches. Both endorsed hardball business tactics that competitors feared and admired but customers loathed.

Nadella was cut from a different cloth. Calm, and described by some as beatific, Nadella was born in India and has an enduring love of cricket. He also embraces Buddhist beliefs and has long enjoyed a reputation for calm responses even in the most contentious circumstances and for focusing on positive feedback to reinforce good habits.

From his first day on the job, Satya Nadella believed that things needed to change, and to change quickly. Microsoft was fading away. It had lost the battle for smartphones. Its primary revenue stream, from software licenses, was perceived as vulnerable as businesses moved away from desktop and server licenses and embraced cloud computing. Linux, the open-source operating system, was set to overtake Windows as the most widely used server operating system. In cloud computing, Amazon was well ahead of both Google and Microsoft’s fledgling Windows Azure cloud service. Because the desktop- and server-license business lines controlled so much revenue, the company struggled to move talent to much smaller but faster-growing business lines. And the powerful Windows unit internally moved to quash any attempts to usurp its power.

As a result, Microsoft was in big trouble, even if it remained insanely profitable. Ballmer had tripled revenues and doubled profits, but Microsoft’s stock price remained largely flat, a clear signal that investor perception was of a future not all that bright. At its core, this was a problem of lack of innovation, of a company trapped by its reliance on a revenue stream that, though enticing, was sure to fade, coming from a legacy product that was on the wrong side of history.

Nadella recognized this and moved swiftly. A former engineer from Sun Microsystems (recognized as one of the most prolific producers of software visionaries), when he came to Microsoft, Nadella eventually became the executive running the nascent cloud business. He had spent time in sales and other management functions and had somehow managed to survive and thrive despite a mellow disposition. He knew that in order to safeguard the company’s future, he needed to set an entirely new tone for it and revamp its culture to make space for innovation and allow new initiatives to grow and succeed. He believed that central to this would be building empathy—a skill and mindset not previously associated with Microsoft.

Nadella made changes both small and large, both symbolic and immediately consequential. In his first public appearance after being named CEO, Nadella said that his company was all about mobile and cloud computing, two fields that were growing very quickly but in which Microsoft was playing second fiddle. He rushed to release the Office productivity suite for iPhones, a move that Microsoft executives had previously blocked out of fear that they would be helping rival Apple and undermining a key motivation for business users to purchase the failing Windows Phones.

More subtly, Nadella began removing the word Windows from conversations. He stopped referring to Microsoft’s cloud as “Windows Azure,” signaling that Azure had its own important product line, distinct from the Windows unit. Then, in late March of 2014, he moved to remove Windows from the cloud product line’s name, making his intentions even clearer. The future of Microsoft did not lie in trying to prop up the Windows dynasty for as long as possible.

As a manager and a leader, too, Nadella made it clear that the old, aggressive behaviors were no longer welcome. Never raising his voice or showing overt anger at employees or executives, Nadella constantly worked to create a more comfortable environment. He never wrote angry emails, and he refused to tolerate anger or yelling in executive meetings.

At the same time, he promoted a culture of curiosity and learning. He urged the company’s 120,000+ employees to embrace a “learn-it-all” curiosity, in contrast to what he categorized as Microsoft’s traditional “know-it-all” worldview. In the marathon Friday executive-team meetings, Nadella instituted a regular feature wherein Microsoft researchers would phone in to talk about their innovations—reminding the company’s leaders of the company’s advances and encouraging them to focus on the future rather than maintain the status quo.

Vivek Wadhwa, lead author of “From Incremental to Exponential.”
Courtesy of Berrett-Koehler Publishers

In a break from the past, Microsoft no longer publicly touts hated enemies or bugaboos. Tensions remain, naturally: Microsoft regularly clashes with Amazon over matters of the cloud, and Nadella has gently prodded potential customers with the reminder that Amazon may one day try to eat their lunch. For the most part, though, Nadella has focused on burnishing the company’s battered reputation. He has warmly embraced the open-source software community, giving Microsoft a credibility boost among developers, and has shown a willingness to partner with competitors, under the right circumstances. He has struck deals with Salesforce (which competes with Microsoft’s CRM products) and Linux reseller Red Hat (which competes with Microsoft’s Windows Server division) to encourage them and their customers to use Microsoft’s Azure cloud.

More importantly, Nadella has laid out a bold strategy and made bold moves. To begin with, he wrote off the entire Nokia acquisition and halted Microsoft’s smartphone efforts in acknowledgment that it was a lost cause. In 2016, he oversaw the purchase of LinkedIn, the social-media network for business executives; and, in 2018, GitHub, the social coding network housing the greatest proportion of the world’s software projects. These are of a pattern: focusing on the future and revenue streams that are complementary to a vision of collaboration and selling cloud-based products and services. Those two purchases contrast with the Nokia purchase, a seemingly desperate attempt to salvage a mobile hardware future and a vision of Windows dominance that did not conform with reality. (Incidentally, both GitHub and LinkedIn are worth considerably more today than what Nadella paid for them.)

Nadella’s clearest and most consequential move, though, came in March 2018, roughly four years after taking over as CEO. In an email to all employees titled “Embracing our future: Intelligent Cloud and Intelligent Edge,” Nadella announced that he would split the old Windows Development Group into two separate engineering groups, one called “Experiences and Devices” and the other called “Cloud + A.I. Platform.” This move cemented the company’s commitment to moving away from Windows and putting the bulk of resources into projects fueling innovation rather than stagnation. It was a bold move and one that met with much grumbling from insiders and people on the old Windows teams. But Nadella was certain that this was Microsoft’s best path. In reality, it was the final big step in Nadella’s plan to reorient the company: it left him, and the rest of Microsoft, free to face the future.

The results of Nadella’s efforts have been nothing short of spectacular. The company’s market capitalization has nearly increased by an order of magnitude, from roughly $300 billion at Nadella’s ascension to about $2.5 trillion today, and Microsoft has become the most valuable company in the world, surpassing Apple and Google. Contributing to this market validation are several successes. First, Microsoft has been wildly successful in converting desktop Office and Windows licenses to subscriptions to the Office365 suite of online productivity products, swapping its lucrative license model for an even more lucrative and stable Software-as-a-Service (SaaS) business model.

Next, Microsoft Azure, now in second place to Amazon’s cloud properties, is making steady headway against them, and is enjoying strong growth in sales of a host of more lucrative SaaS offerings, including its CRM and business analytics platforms.

Even the Microsoft Surface tablet has emerged as a quiet market success, taking some of the dominant iPad’s market share.

Finally, amidst all this, sales of Windows operating systems on PCs and of Windows Server continue to grow slowly and remain highly profitable; so pulling revenues away from legacy products with slow development timelines may turn out not to have hurt their sales much after all.

What enabled these dramatic changes were the new culture of humility, acceptance of change, and openness to external ideas. The resulting successes bear out Nadella’s Hit Reset claim that “Culture eats strategy for breakfast,” and Microsoft’s reinvention has clearly sown the seeds of further success.

Excerpted from the book From Incremental to Exponential, by Vivek Wadhwa and Ismail Amla with Alex Salkever, Copyright © 2021. Reprinted by permission of Berrett-Koehler Publishers, www.bkconnection.com.