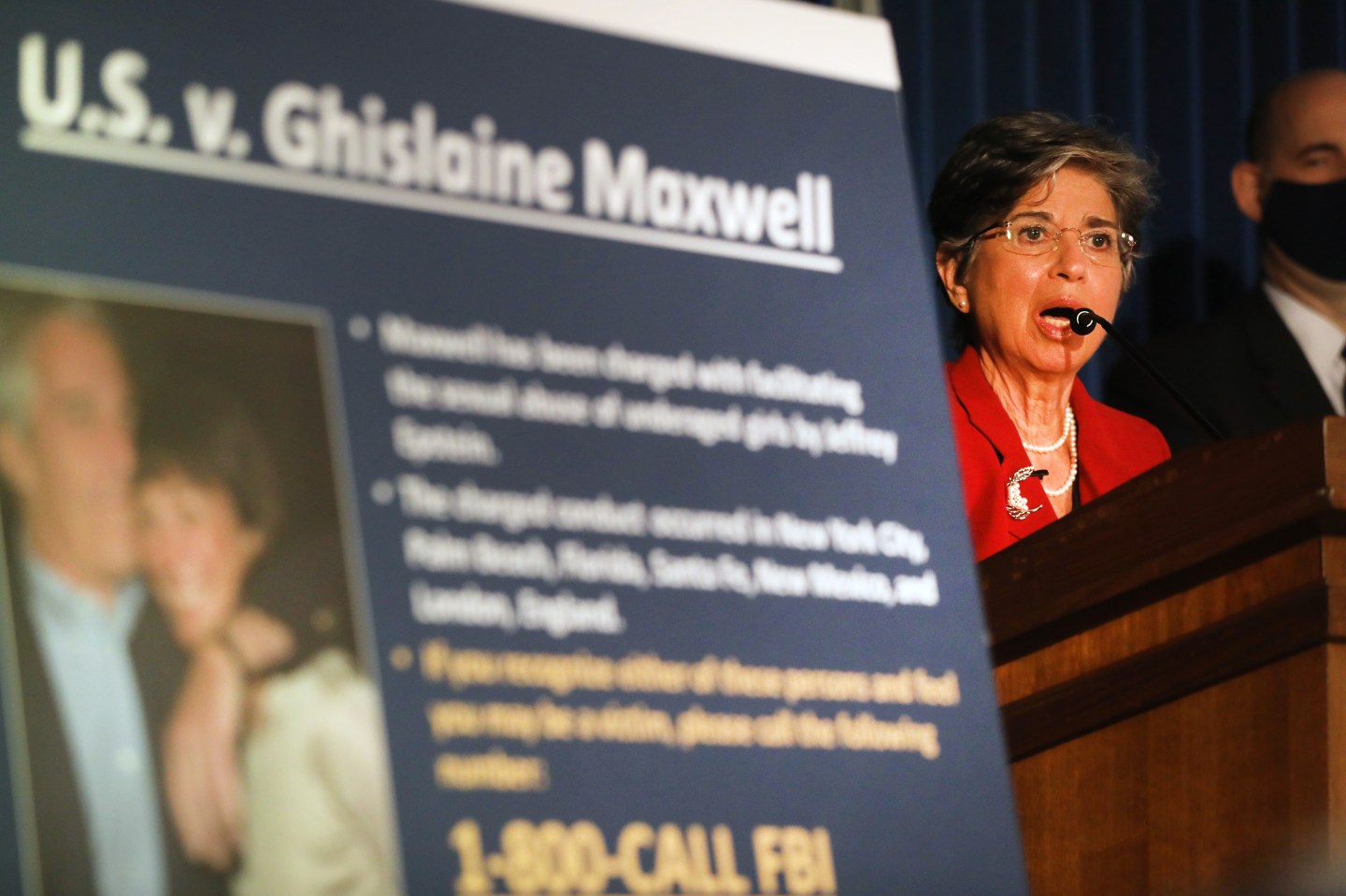 Acting U.S. Attorney for the Southern District of New York, Audrey Strauss, speaks to the media at a press conference to announce the arrest of Ghislaine Maxwell, the longtime girlfriend and accused accomplice of deceased accused sex-trafficker Jeffrey Epstein, on July 2, 2020.
Spencer Platt—Getty Images

Prosecutors in Ghislaine Maxwell’s sex-trafficking trial said Tuesday they will rest their case this week, as the third of four accusers testified against the British socialite.

Carolyn, who was identified in the court by only her first name, told jurors that she was first sexually abused by Jeffrey Epstein at age 13, and that Maxwell encouraged her to engage in sexual encounters with the disgraced financier. Carolyn said she “was too old” for Epstein when she was 18 and he began to ask if she had “younger friends.”

As they’ve done with Maxwell’s two other accusers, defense attorneys attacked Carolyn’s story, questioning her memory and motives. Maxwell’s lawyers have said this case is about “memory, manipulation and money” and have sought to portray her alleged victims as unreliable and motivated by payouts from an Epstein victim’s fund.

“Money will never fix what that woman has done to me!” Carolyn yelled after prosecutors asked if she was testifying against Maxwell for money, as had been suggested by the socialite’s attorneys. “What she did was wrong. She takes vulnerable young girls. I’m so petrified for my daughters.”

The trial, originally slated to run into mid-January, may end sooner than anticipated as prosecutors told the judge they expect to be finished with their side by Dec. 9. The judge had scheduled six weeks for the trial, which began Nov. 29. It’s not clear how many witnesses the defense will call.

The jury has seen days of dramatic testimony from women who say Maxwell lured and groomed underage girls for sex with Epstein, her former boyfriend and employer, culminating in a passionate appearance Tuesday by the third of four accusers expected to testify.

Maxwell has pleaded not guilty to the charges, and her lawyers say she is being scapegoated for the crimes of Epstein, who committed suicide in 2019 while awaiting his own trial on sex-trafficking charges.

Carolyn said Maxwell told another girl to “show her what to do” before sending them upstairs to Epstein’s Palm Beach, Florida, massage room to participate in her first sexual encounter with him. She said she eventually had more than 100 sexual encounters with Epstein between the ages of 14 and 16.

Prosecutors claim Epstein and Maxwell targeted vulnerable girls with difficult home lives. Carolyn said she grew up in nearby West Palm Beach with an inattentive mother who was an alcoholic and a drug addict, and that she dropped out of school in the seventh grade.

Asked by prosecutor Maurene Comey how she supported herself at the time, Carolyn answered, “I went to Mr. Epstein’s house, and I got money that way.”

She was questioned by Comey for about an hour. Most of Tuesday afternoon was then taken over by defense lawyer Jeffrey Pagliuca’s lengthy, at times plodding, cross-examination, which highlighted a number of inconsistencies between Carolyn’s trial testimony and allegations she made in a 2008 lawsuit against Epstein and his assistant, Sarah Kellen, but not Maxwell. Carolyn said the suit settled for around $250,000 and she later received around $2.8 million from Epstein’s estate.

On the stand, Carolyn said she was introduced to Maxwell and Epstein by Virginia Giuffre, who has publicly accused Maxwell and Epstein of abuse but is not testifying at the trial. Giuffre is currently suing Maxwell as well as Prince Andrew and Harvard Law School Professor Alan Dershowitz, whom she claims were part of a group of powerful men she was offered to by Epstein for sex. Andrew and Dershowitz have both denied Giuffre’s claim.

According to Carolyn, it was Giuffre whom Maxwell first asked to take her to Epstein’s massage room. Before Epstein arrived, Giuffre opened up the massage table, got it ready and then took her clothes off while Carolyn wore only her underwear. Then Epstein entered, brushing his teeth.

Carolyn said the two girls massaged Epstein and then she watched Giuffre have sex with him. “I was sitting on the couch right in front of them,” Carolyn said as she started to cry.

When she was around 15, Carolyn was asked by Epstein to bring other girls for massages, she testified. She said she eventually brought another 15-year-old and two girls who were 16. Epstein paid her $600 per massage, while her friends were paid $300, she recalled. Carolyn said she used the money to buy drugs, having turned to marijuana, cocaine and other substances to “block out” her appointments with Epstein.

On two occasions during which Maxwell called her to give massages to Epstein, he summoned two other girls to engage in group sex, Carolyn said.

She testified that she took a “break” from Epstein to run away with her boyfriend. She went back to Epstein when she was 18 because she had had a son and needed money, she said.

Maxwell’s defense argued in opening statements that her accusers had invented or embellished claims against her in the hopes of getting more money from Epstein’s estate. On cross-examination, Pagliuca said that Carolyn claimed in her lawsuit that Epstein called her for a massage on one occasion but attributed the call to Maxwell at trial.

“That’s what it says,” Carolyn said of the lawsuit, “but it wasn’t accurate.”

‘Truth and a Lie’

Pagliuca tried to introduce the entire 91-page suit into evidence, but U.S. District Judge Alison Nathan limited him to questions about a handful of paragraphs, including why certain details of her sexual encounters with Epstein had changed and why she said in the suit she met Epstein in 2002 instead of 2001.

Under questioning by Comey, Carolyn told the jury that she was once arrested for cocaine possession and also spent 52 days in jail for pawning a stolen Xbox. She also said she is currently taking Xanax, Methadone and another drug to treat schizophrenia, but that the illness did not prevent her from telling the difference “between the truth and a lie.”

Maxwell’s defense lawyers had aggressively questioned “Kate,” another Maxwell accuser, on Monday about her previous drug use, suggesting it may have impaired her memory of events. Kate denied that. Pagliuca similarly asked Carolyn about her drug use, asking if she was addicted to benzodiazepines.

“That’s Xanax, which I take for anxiety,” she said.