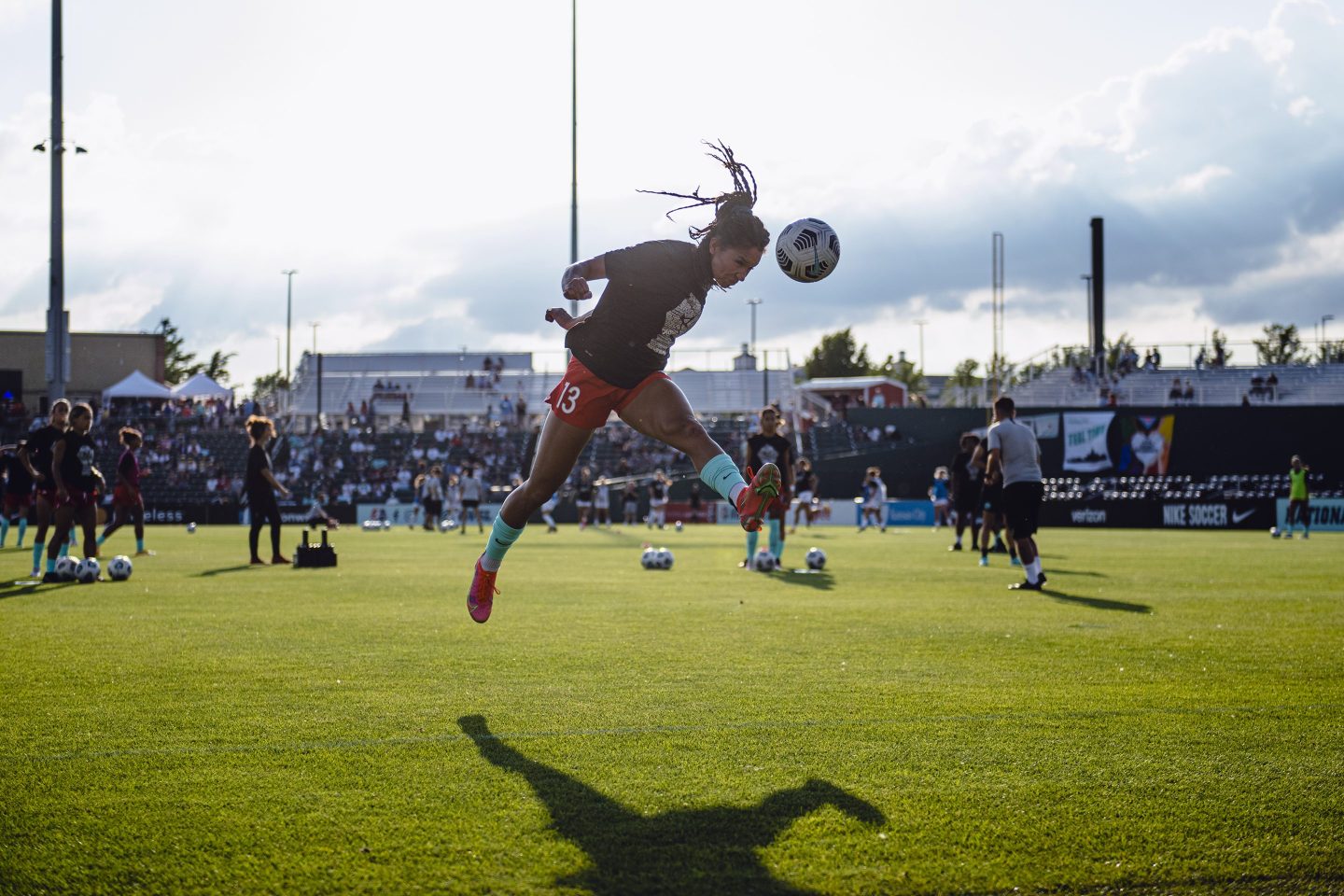 Darian Jenkins #13 of Kansas City warms up before a game between Washington Spirit and Kansas City at Legends Field on June 26, 2021 in Kansas City, Kansas.
Amy Kontras—ISI Photos/Getty Images

Good morning, Broadsheet readers! Rent the Runway starts trading, Canada maintains a gender-neutral cabinet, and Kansas City will get a stadium just for women’s soccer. Have a wonderful Wednesday!

– Build it and she will come. All those multi-million dollar sports stadiums that mark cityscapes, each and every one, was built for a men’s team.

Long and her husband Chris, along with fellow team co-owner Brittany Matthews, an entrepreneur and fiancée of Kansas City Chiefs quarterback Patrick Mahomes, have set out to change that, according to a new report in the Wall Street Journal. They’re planning on building a $70 million, 11,000-seat privately-funded stadium for their team that will open in 2024. (The team’s permanent name will be announced at halftime of a game on Saturday.)

Most teams in the pro league share a stadium with their male counterparts or play at college or multi-purpose venues. As the Journal reports, universities are bound to build women’s sports facilities by anti-discrimination laws, but no such measures are in place at the professional level, leading to what’s thought to be a total dearth of stadiums constructed for women.

Chris Long told the Journal he and his wife couldn’t even find examples overseas.

“How is that possible, that there aren’t others?” Angie Long says. “It’s about time.”

The commitment the new stadium represents looks past the NWSL’s recent scandals, in which players have alleged toxic work environments and accused star coach Paul Riley of sexual coercion. (He says most of the claims are untrue and denied having sex with his players.) Commissioner Lisa Baird resigned over the controversies and the league’s handling of them.

We often cite the discrepancies between women’s and men’s sports—base salaries, prize money, that pathetic excuse for a weight room—but towering stadiums anchored by men’s teams are an especially blatant example. In Kansas City, at least, a temple to women’s sports will dot the skyline too.

Editor’s note: An earlier version of this post misspelled the name of new Canadian foreign minister Mélanie Joly. We regret the error.

- RTR IPO. Rent the Runway, led by CEO Jenn Hyman, expanded its IPO on Tuesday and priced its shares at the top of its range, raising $357 million. The offering values the company at $1.3 billion, up from $870 million following its funding round in April. (Accounting for the fully-diluted share count, the company will have a valuation of $1.5 billion.) The shares are expected to start trading today. Fortune

- Cabinet reshuffle. Canadian Prime Minister Justin Trudeau reshuffled his cabinet after winning a third term in a September election. He named Mélanie Joly as foreign minister and Anita Anand as defense minister, among other moves. He also created a new role of minister of mental health and addictions, which Carolyn Bennett will fill. Trudeau's cabinet remains gender-neutral, as it has through his seven-year tenure. The Guardian

- City life. Bloomberg Businessweek analyzed the world's top 15 business cities and ranked them by how friendly they are to working women, taking into account safety, mobility, maternity provisions, equality, and wealth. No. 1 on the list is Toronto; Sao Paulo ranks last. Bloomberg

- Rest up. Queen Elizabeth won't go to the United Nations' COP26 climate change summit in Scotland next week after doctors encouraged her to rest. She also recently canceled a trip to Northern Ireland. The 95-year-old, who usually keeps a busy schedule, spent a night in the hospital last week for what the palace called "preliminary investigations." Wall Street Journal

- Missed opportunities. Many Tesla bulls celebrated on Monday as the EV maker's market cap surpassed $1 trillion following Hertz's announcement that it will order 100,000 Teslas for its fleet. But ARK Invest founder Cathie Wood missed out on some of that windfall. She sold off a big chunk of Tesla holdings days before the announcement, leaving nearly $130 million on the table. Fortune

- On the ballot. A new report suggests a record number of Black women candidates will run for local, state, and federal office in 2022. Fordham University political scientist Christina Greer says Black women are running for office, in part, because they are frustrated by the status quo. “As the political canaries in the mine, Black women are the ones who see and experience the danger first," she said. The 19th*

How Issa Rae gets it done The Cut

"You will not see me on the field, but you best believe that I will be around helping this game grow."

- Soccer player Carli Lloyd, on her retirement from the U.S. Women's National Team