The Great Resignation is no joke 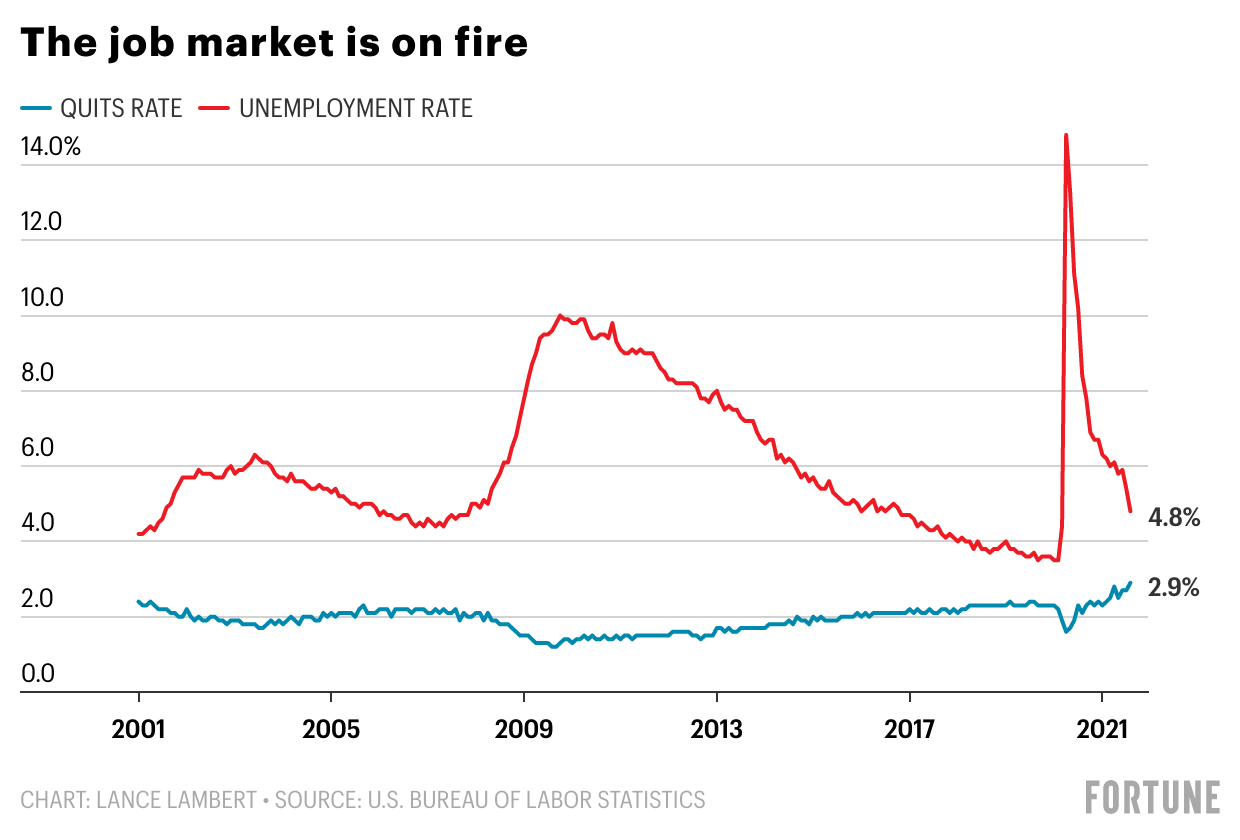 The economy is bigger now than it was before the pandemic struck. However, we’re down 5 million U.S. workers from pre-crisis levels. The answer to that worker shortage is perplexing. Can it be pinpointed on COVID-19 spurred-retirements? Or are workers simply giving up on, well, work? Regardless, it’s translating into remaining staffers taking on more responsibilities—which, of course, is only adding to burnout issues.

But how do CEOs view this worker shortage and so-called Great Resignation? Is it a speed bump, or something bigger? To find out, Fortune surveyed CEOs in collaboration with Deloitte this fall. We heard from 117 chief executive officers.*

1. The power in the labor market continues to shift to employees.

Last month, a record 4.3 million U.S. workers voluntarily quit their jobs. That’s equal to the combined population of South Dakota, North Dakota, Alaska, Vermont, Wyoming, and the District of Columbia. It’s wild how fast things changed: Just 18 months ago the jobless rate sat at an 80-year high, and employees were clinging desperately to their jobs.

One theory for why quitting continue to rise: in part, because of rising inflation. Hear me out. According to the U.S. Bureau of Labor Statistics, someone earning $150,000 on Jan. 1, 2021, would now need to earn $157,300 to have the same purchasing power. So with the average U.S. raise only at 3%, it makes sense that more people are listening to offers. If they aren’t getting a pay raise, then in an economic sense, they’re taking a fairly big pay cut.

Okay, now let’s go back to the CEO survey data.

The heads of corporate America are pretty clear: Their biggest external concerns are the labor shortage (73%) and the pandemic (70%). After that, they say cyber risks (29%) and geopolitical concerns (23%).

That makes sense, considering the outlook Goldman Sachs recently gave: “Although we expect labor-market shortages to ease going forward, early retirements, the 2020 immigration collapse, and lingering mismatch will likely mean that a 3.5% unemployment rate—our forecast for end-2022—would imply a tighter labor market than it did last cycle. As a result, we expect wage growth will remain at about 3.75% in 2022, stronger than it was last cycle.”

3. To combat the labor shortage, businesses are trying, well, everything.

Don’t blame the ongoing pandemic alone for the reason employers haven’t brought back staffers to the office. Some employers are simply holding off because they’re afraid workers will leave.

Indeed, 80% of CEOs we surveyed said they’re offering increased WFH flexibility in an attempt to retain and attract talent. That’s followed by 68% of CEOs who said they’ve increased their emphasis on corporate purpose.