Once an oddity of Japan’s digital culture, VTubers have become a global hit—and brands want in 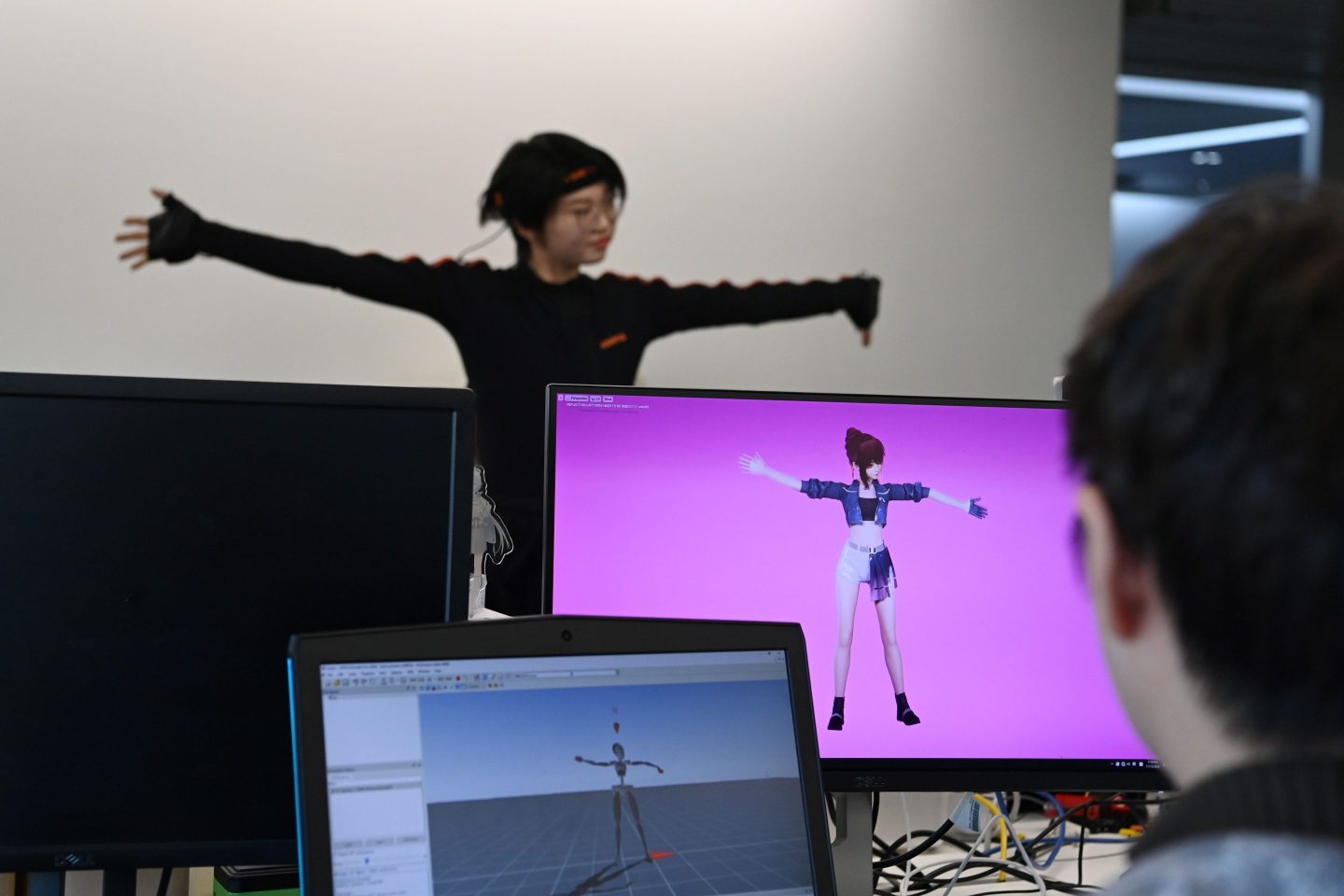 Once part of Japan's digital culture, "virtual Youtubers" and other digital characters have spread to markets like China, South Korea, Indonesia and English-speaking markets.
Greg Baker—AFP via Getty Images

Using anime characters as marketing tools is common throughout Japan. Original and licensed anime characters are used to advertise products, merchandise, services and events, including the 2021 Tokyo Olympics.

Yet the characters featured in Japan’s baseball league were different in that they were real people—well, kind of.

Each character was a Japanese streamer managed by Hololive, a talent agency specializing in “VTubers”: a digital avatar brought to life online, so to speak, by a real-life presenter, or “talent.” Hololive, owned by Japan-based Cover Corp, is one of the largest of these agencies, with 43 million subscribers across its 57 talents. Beyond that, thousands of VTubers now stream in markets like China, South Korea, Indonesia and the United States.

What was originally viewed as an oddity of Japan’s digital culture has risen in global popularity over the past year. People stuck at home during COVID-19 lockdowns looked online for entertainment, and millions turned to livestreams—including the VTuber subculture.

One of those most popular is Usada Pekora, a Japanese VTuber, best known for playing classic Japanese role-playing games, playing pranks on her fellow streamers in Minecraft, and a deep friendship with an Indonesian VTuber colleague despite neither fluently speaking the other’s language. Pekora was, according to Stream Hatchet data, the third most-watched female streamer of the second quarter of 2021.

A deep and engaged fanbase pushes these talents to digital stardom, and that’s despite—or perhaps because of—performing in relative anonymity, behind an avatar. Fans are all too happy to help VTuber’s build out the “character,” whether it be by offering translation services to crack new markets, or throwing in financial support.

According to data from Playboard, out of the top twenty YouTube channels that have received the most “Superchat” donations from fans, seventeen are VTubers.

“The recent surge in VTuber content is not new to the global streaming community, as it has been popular on [Asian] streaming sites, but [it’s] also increasing in viewership on Western sites like Twitch,” adds Monserrat.

Just as impressively, a new breed of ad agency is wasting no time commercializing the craze.

What exactly is VTubing?

In one sense, a VTuber—short for “virtual YouTuber”—is little different from your regular streamer. These entertainers play video games, record reaction videos, stream their daily activities, and interact with their fans, much like other streamers on YouTube, Twitch, China’s Billibilli and other platforms.

But while a regular streamer may release content under his own name and show himself on camera, a VTuber instead streams behind the cloak of a digital avatar. The avatar, using facial recognition and motion capture technology, emulates the expressions and movements of the performer. VTubers also often perform under assumed names, putting an additional barrier between the audience and the actual performer. VTubers aren’t necessarily anonymous—dedicated research could unmask a VTuber’s ‘previous life’—but discussion of the person behind the avatar is discouraged by the streamers and their fans.

While digital avatars had been present on YouTube since the early 2010s, the first VTuber to achieve real popularity was Kizuna AI. Kizuna, portrayed by Nozomi Kasuga, a Japanese voice actor who turned 26 this year, was also a hit in the “real world.” She hosted television shows, graced magazine covers, and even acted as spokesperson for Japan’s National Tourism Organization.

The development of cheap facial recognition and motion-tracking software has given rise to a vast number of independent VTubers. But many credit Kizuna AI for pushing the digital phenomenon into a major business; several talent agencies dedicated to VTubers later appeared soon after, including Cover Corp’s Hololive and Anycolor’s Nijisanji.

Talent agencies provide infrastructure, plus the tech and legal support for dealing with platforms like Twitch and YouTube; they also sign marketing deals with other companies, such as Hololive’s—somewhat manic—promotion of Nissin’s Curry Meshi cup noodles.

In October 2020, Hololive launched the first cohort of primarily English-speaking VTubers. The streamers saw explosive subscriber growth, quickly overtaking their Japanese counterparts in a matter of weeks. They were soon followed by other agencies: VShojo, based in San Fancisco and launched by a member of Twitch’s founding team, debuted in November 2020 with a cohort of exclusively English-streaming talent. Rival agency Nijisanji launched its own English-speaking cohort in May.

Before these launches, global interest in VTubing had been building. Japan’s talent agencies had already started to explore international expansion, hiring talent in China, Korea and Indonesia. Meanwhile, translated clips of Japanese VTubers were starting to go viral on platforms like 4Chan and Reddit. Bilingual entertainers in Japan were also starting to engage more with their international audiences.

Agencies, meanwhile, continue to expand in Western markets: both Hololive and Nijisanji launched second generations of English talent in 2021.

VTubers—or, more accurately, the performers behind the digital mask—face many of the same problems of traditional streamers, from online harassment and arbitrary decisions by platform operators to running afoul of copyright and just general burnout.

Additionally, agencies may own the rights to a particular avatar or their work even after the original performer who popularized it leaves (or, as one agency euphemistically calls it, “graduating”). Performers who leave the agency on bad terms can see their videos “privated,” erasing entire bodies of work.

However, agencies still have to consider fan expectations. In one example, efforts to expand Kizuna AI’s presence to multiple channels—handled by multiple voice actors—led to a fan backlash that required the original voice actor to return to dismiss rumors that she was being phased out.

The future of VTubing

Despite the impressive recent growth, VTubers—and even the larger idea of digital avatars—fly under the radar of most Western audiences who instead spend their time with Snapchat filters and animated emojis.

That may be about to change. Companies looking to revive a semblance of an office environment in an age of remote and hybrid work are mulling the use of avatars in more professional settings. Facebook’s recently announced “Horizon Workrooms,” for example, is a virtual reality app in beta that would allow a worker to construct a digital avatar of herself who would then lead a virtual brainstorming meeting. Could all-hands virtual meetings populated by you and your colleagues, all in avatar form, be that far behind?

What limits VTubing is perhaps not the digital avatar itself, but rather its connection to the sometimes rough-and-tumble streaming subculture. Agencies have to balance giving their talent the permission to express themselves and communicate with their fans—sometimes in ways that cross into not-safe-for-work territory—and preserving an image that established brands feel comfortable attaching themselves to.

While the phenomenon continues to catch on globally, Western VTubers still lag their Japanese counterparts in popularity. According to Stream Hatchet, only three of August’s top 10 VTubers are English-speakers. Yet VTubers have broken into Western livestreaming consumption. As Justin Rothschild, marketing manager for Stream Hatchet notes, “If VTubers can succeed on Twitch [a primarily North American platform], there doesn’t exist a live streaming market they can’t reach; opening doors to even bigger audiences, sponsorship deals, and growth opportunities.”

After a year and a half of life mainly indoors, foreign audiences are becoming increasingly receptive to the VTubing trend. Just a few weeks after debuting, one of Hololive’s second generation of English streamers already had over 375,000 subscribers.

This story is part of Fortune‘s Brandemic marketing: Going viral in the age of COVID series.