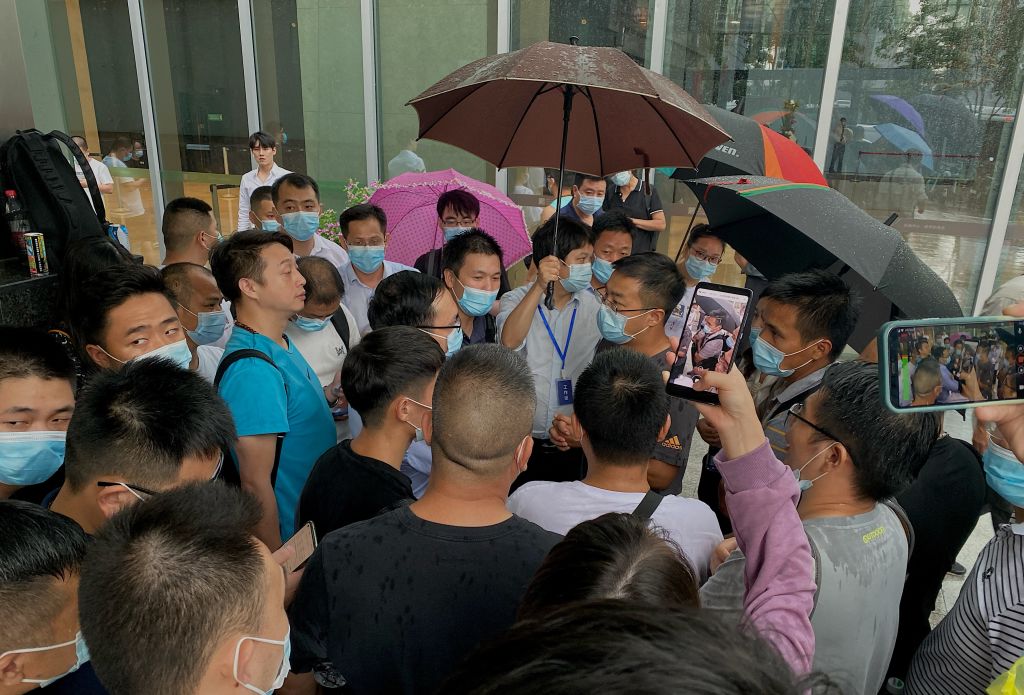 China Evergrande Group acknowledged Tuesday that it is unable to sell property and other assets fast enough to meet repayment deadlines for more than $300 billion in debt, and that its cash flow is under “tremendous pressure.”

In a bleak assessment of its financial prospects issued to the Hong Kong Stock Exchange today, Evergrande, China’s second-largest property developer, said it has struggled to find buyers in September, typically a strong month for property sales in China, resulting in “continuous deterioration of cash collection by the Group.”

The company blamed “ongoing negative media reports” for its travails.

Evergrande also confirmed that two of its subsidiaries have failed to uphold obligations for $145 million worth of wealth management products, which could “lead to cross-default”—an outcome the company said “would have a material adverse effect on the group’s business prospects.”

Evergrande’s Tuesday announcement comes a day after more than 100 angry investors stormed the lobby of the company’s headquarters in Shenzhen to demand repayment of overdue wealth management products. The Guardian reports that hundreds more have protested on an online forum set up by the People’s Daily, the official newspaper of the Chinese Communist Party. Last Thursday, a crowd of disgruntled homebuyers descended on the housing bureau of Guangzhou’s Nansha district to demand the government force Evergrande to resume construction on a complex of 5,000 apartments that has been halted since May.

Late Monday, the company issued a statement denying speculation that it is contemplating a drastic debt restructuring. Evergrande promised that, while the group was “indeed facing unprecedented difficulties at the moment,” it would “do everything possible to restore normal business operations and fully guarantee customers’ rights and interests.”

But in Tuesday’s statement, Evergrande offered a far more sober account of its plight. The company said it has “made no material progress” in enlisting help from outside investors, and has had no luck selling its electric vehicle unit, a property services subsidiary, or the China Evergrande Centre, the building that houses its offices in Hong Kong.

The company also disclosed that it has hired two financial advisors, Houlihan Lokey and Admiralty Harbour Capital, to “explore all feasible solutions to ease the current liquidity issue.”

Bloomberg reports that the Chinese government is assembling a separate group of accounting and legal experts to review Evergrande’s finances—a move many analysts interpreted as a sign that China’s financial regulators don’t want a government-led bailout for Evergrande and instead will force a restructuring. Guangdong officials have reportedly turned down at least one bailout request from Evergrande’s founder, billionaire Hui Ka Yan.

But a complete collapse would be messy. Evergrande’s creditors run the gamut from individual homebuyers, wealth management product buyers, and small vendors to domestic banks and both local and foreign bondholders. Many analysts expect Beijing to protect smaller creditors but insist banks and bondholders take a haircut.

But it’s almost impossible to predict what sort of knock-on effects even a partial restructuring would have on China’s banking system and property market. And Evergrande’s troubles come at a moment when President Xi Jinping is tightening the state’s grip on nearly every other sector of the economy, and China’s vaunted recovery appears to be losing steam.

Taro Kono, the Japanese vaccine tsar, declared his candidacy to become the leader of Japan’s Liberal Democratic Party on Friday and appears to be in the pole position to win the country’s next prime ministership. Japan’s LDP votes for its leader on Sept. 29, followed by a general election weeks later where the LDP candidate is virtually guaranteed victory. Kono has taken a consistent lead in polls against former Foreign Minister Fumio Kishida and former communications minister Sanae Takaichi, and Japan’s stock market is hitting high not seen in decades in anticipation that Kono or one of his competitors will inject new money into Japan’s economy. Nikkei Asia

U.S. President Joe Biden has invited the leaders of the ‘Quad’—Australia, India, and Japan—to the White House on Sept. 24 for an in-person summit. The Quad alliance was formed earlier this year, in part, to provide a counter balance to China’s dominant power in the region. The meeting next week will focus on cooperating on COVID-19 vaccines, climate policy, and promoting democratic ideals in the Indo-Pacific region, a White House spokesperson said Monday. Reuters

When the first wave of COVID-19 struck India in 2020, the southern state of Kerala emerged as a unique success story in battling the virus. Local authorities promoted the “Kerala model” as a blueprint to contain COVID-19 outbreaks across the country. But the state has now become an epicenter of India’s COVID-19 crisis, accounting for up to 70% of the country’s daily caseload. Health experts say the state may be especially vulnerable to the virus since—unlike other regions—a high share of its population has not yet developed immunity from a COVID-19 infection. Still, the spiraling outbreak also suggests that Kerala’s COVID-19 response may not be as effective as once thought. Fortune

Chinese listings in the U.S. are battling fresh scrutiny from Chinese and U.S. regulators, but at least one corner of the market appears to be going strong: small to medium cap Chinese firms going public in the U.S. The continued success of these IPOs is a big reason why from January to April of this year, Chinese companies raised roughly $6.6 billion from U.S. listings, eight times more than in the same period last year. But even as these listings may not get the attention of blockbuster IPOs, the smaller listings may now come under increasing scrutiny for wild fluctuations in their stock prices after debuting in the U.S. and perceptions–sometimes proven accurate–that they may be prone to fraud.

Blackstone – Last week, the U.S. private equity giant called off its $3.3 billion acquisition of property giant Soho China. On Monday, shares in Soho China on the Hong Kong stock exchange plunged by up to 40% as questions mount about Soho China’s business and why the deal fell through.

Google – On Tuesday, South Korea antitrust agency fined Google $177 million for forcing Samsung and other tech companies to use only approved versions of its Android operating system. While Android is open source, Google had blocked manufacturers from developing their own operating systems based on Google’s technology.

Alipay – Beijing intends to break up Alipay, owned by fintech giant and Alibaba-affiliate Ant Group, and create a separate app for Ant Group’s loan business. The plan would require Ant Group to turn over user data to a new joint-venture that would be partially state-owned.

Guo Wengui – Three media companies linked to Guo Wengui, a Chinese businessman and prominent Chinese government critics, will pay $539 million to U.S. regulators to resolve allegations that they issued illegal securities to thousands of investors. The SEC on Monday accused Guo’s companies of “corporate greed” and “cutting corners” to steal from investors. The companies settled with regulators without denying the SEC’s allegations.

South Korea crypto – Two-thirds of South Korea’s crypto exchanges are set to be wiped out in coming weeks as traders brace for $2.6 billion in losses. South Korea’s financial watchdog set a Sept. 24 deadline for foreign and local cryptocurrency platforms to register with the government as part of a regulatory overhaul of crypto trading.

Everest Medicines – The Chinese biopharma firm is licensing an mRNA COVID-19 vaccine from Canada’s Providence Therapeutics Holdings in a $500 million deal to sell the jabs in the Chinese market. China has yet to approve an mRNA jab, and Providence’s vaccine has only recently completed phase 1 trials in Canada.

4.5 million
China has locked down 4.5 million people in the southern province of Fujian after a COVID-19 outbreak infected 103 people. In the city of Xiamen, local authorities have sealed off residential compounds and villages, closed bars, entertainment venues, offices, and schools, and embarked on a massive testing and contact tracing campaign. Experts are pointing to a man who recently arrived from Singapore as a likely source of the outbreak, even as chances are low that he brought the virus from Singapore due to the fact that he served a 21-day quarantine upon arriving and tested negative for the virus nine times before testing positive on day 37 in China.