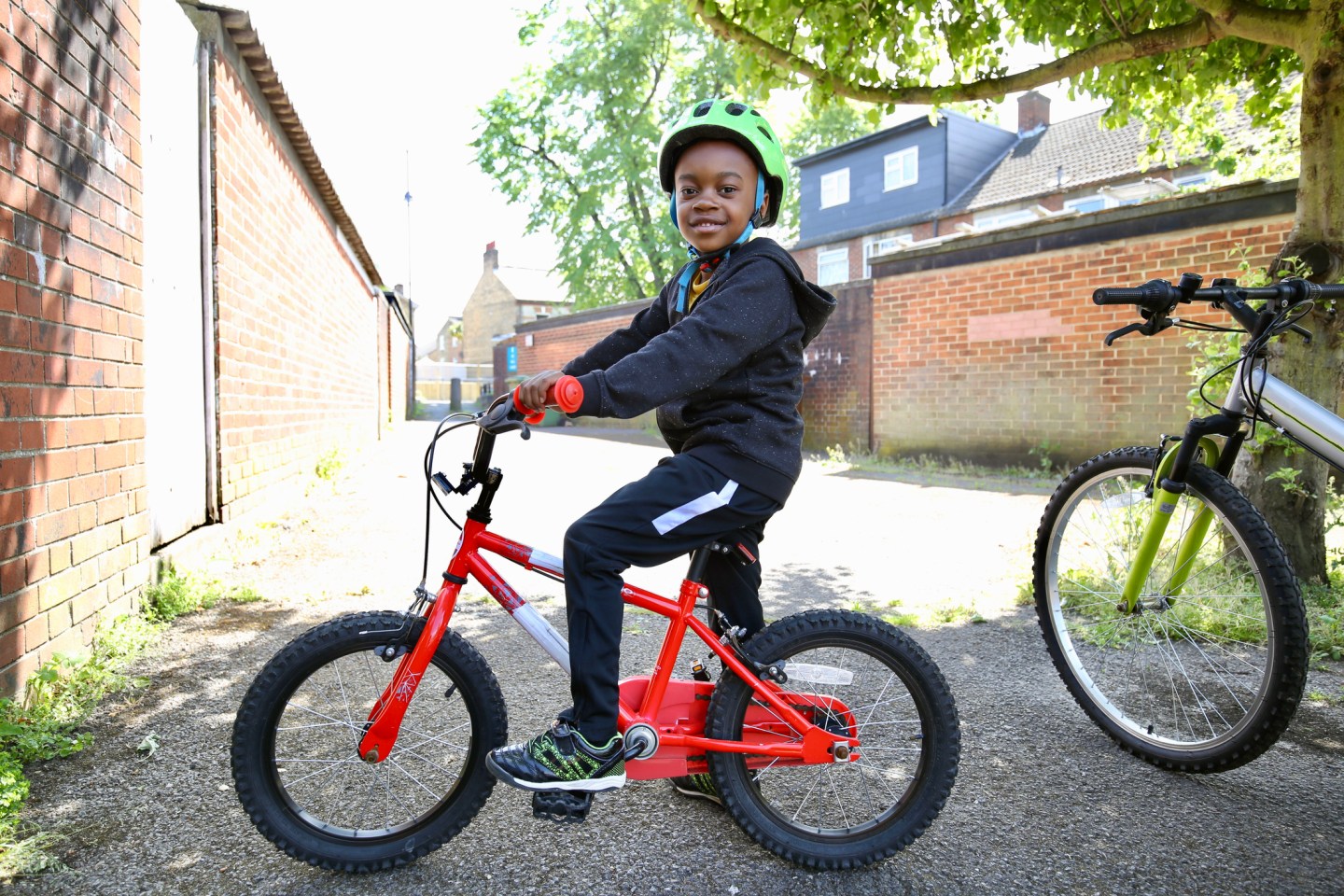 As a student at Howard University in Washington, D.C., Martino Wilkerson had to be at his lifeguard job at 5:15 a.m.—and his bicycle was his key mode of transport. “I couldn’t afford a car. And while there was a Metro bus stop a few blocks from my house, my nine-minute bike ride to work would have taken 45 minutes by bus.” Wilkerson is among 870,000 people—many of them young and urban—who bike to work, according to the U.S. Census. While the Census data show that only 0.6% of Americans bike to work, and most fall in the 16-to-24 age group, advocates of cycling and bike lane infrastructure say “active transportation” will, in the long run, save money, boost income, and help economic profiles—both an individual’s and society’s.

The impact on the individual can be even greater. Owning a car is expensive. AAA reported that the average yearly cost of a car in 2020 was $9,561, an increase of nearly $280 from the year prior, and that does not include expenses such as parking. Further, its research shows that families that earn less than $70,000 a year spend nearly 20% of their income on transportation. “So if you can alleviate that, or even cut that expense in half, you have just made a more affordable city for people to live in,” says Mike Sule, the executive director of Asheville on Bikes, a North Carolina bike advocacy group.

It’s why D.C.’s decision six years ago to teach all second graders to ride a bike is not only about health and recreation but also about economics. The program is the brainchild of Miriam Kenyon, director for health and fitness education, LGBTQ and sexual health programs for DC Public Schools (DCPS). The genesis for the program came when she brought in a local group to teach bike safety and discovered that a significant percentage of children as old as 10 didn’t know how to ride a bike. Riding a bike “opens up, sort of, that accessibility…independence,” says Kenyon, of the program that began in all D.C. public schools in 2015. Now 85% of second graders are able to ride a bike proficiently upon graduation from the scheme.

The direct health impact of a program like DCPS’s bike program is profound. Studies have shown that children who learn to ride bikes early tend to stick with it their whole life and become healthier adults. Furthermore, the “public health impact is also an economic impact for the society,” says Jenny Liu, an associate professor at the Toulan School of Urban Studies & Planning and director of the Center for Urban Studies at Portland State University in Oregon, who studies the economics of cycling. “Because if we have healthier people who are more active, it obviously drives the costs of health care down,” especially for minorities. A 2011 study of health inequalities shows that eliminating health disparities would reduce household health costs by nearly $230 billion. Sixty-four percent of D.C.’s public school students are Black and 18% are Hispanic.

“Cities with good biking and walking infrastructure have healthier residents and lower health care expenses. This increases the spending power of those residents, because they are not forced by poor health to spend their own scarce resources on expensive health care items,” says Sule. Portland, Ore., which lands on almost every list of top cycling cities, estimates that the investment in bike lanes could save the city $600 million a year. A study on NYC’s investment in new bike lanes found that for every $1,300 spent, all city residents gained the equivalent of one full year of life at full health. The coauthor of that study, Babak Mohit, suggests that bike lanes are a better return on investment than health treatments, such as dialysis, which can cost nearly $130,000 a year.

The economics of cycling

Liu’s research on the economics of cycling has led to the development of an “economic assessment guide book” for cities and towns interested in investing in bike infrastructure. “I think that having evidence is super important in thinking about where do we want to put our infrastructure investment money? What do we want our cities to look like in the future?”

Liu says when she started studying the economics of bike infrastructure there wasn’t robust research that asked, “What does the data show us when you put in a nice, separated bike lane in a business district?” The answers gave advocates the ammunition they needed to change the existing attitudes of municipal leaders—that their cities should remain car-centric and not bike- and walk-friendly. “There was an assumption that more bikes and less car parking would be bad for business,” says Liu. What she found in her study that focused on six cities—Portland, Seattle, San Francisco, Memphis, Minneapolis, and Indianapolis—is that bike lanes don’t hurt business and can in fact boost business. For example, bike lanes installed on one street in Minneapolis resulted in a 52.44% increase in food sales. A similar study in London showed that cyclists spent 40% more at local businesses compared to car drivers.

And then there is the infrastructure cost. Studies show that bike lanes cost less to build than roadways and highways—240% less, according to a study by the Political Economy Research Institute. It costs about $60 million to build a mile of urban freeway and less than $250,000 to build a mile of bike lane. “Active transportation” has also caught the attention of the federal government. Over the past three decades, there has been an uptick in federal dollars focused on bicycling infrastructure, from $22.9 million in 1992 to more than  $970 million in 2017.

The economics of cycling inequality

There are few scientific studies that prove Wilkerson’s narrative—that a bicycle allowed him to get to his job and enabled him to keep it. While there is strong research that shows having access to a car helps people get and stay employed, there isn’t a lot of research on the relationship between bike ownership/bike infrastructure and employment, says Jennifer Dill of the Toulan School of Urban Studies and Planning at PSU.

What is known is that approximately one-third of the population doesn’t drive (possibly because they can’t afford a car) and is transit dependent, says Nesper. Many are “extreme commuters” who can spend hours on public transportation to get to work because they can’t afford to live closer to their jobs in metro areas. Others live in transportation deserts that require long walks to transportation hubs, further increasing their commutes. Research shows that higher paid workers have the shortest commutes and the best access to public transportation, while hourly workers and those in the lowest income bracket face the longest commutes, whether by public transit or car. “If the bus doesn’t run, if your car’s broken down? Do you have other options?” asks Danny Harris, executive director of Transportation Alternatives, a New York City–based advocacy group. “How are you going to get to school? How are you going to get to work?  If you miss that shift, will you lose your job and ultimately lose your livelihood, if you’re one paycheck away from being unhoused? Transportation is everything. Because if you can’t get to where you need to work, it means that you and your family will have nothing.”

“Theoretically…if the transit system isn’t there, then workers should have an alternative, and the bicycle would be a good alternative mode of transportation,” says Sule. The problem in Asheville and other smaller cities and towns in the U.S. is the lack of a bicycle network to connect people from downtown to their home outside the city limits on safe and dependable bicycle facilities. “So until the facilities are built, traditional bike lanes, protected bike lanes, buffered bike lanes, you’re not really going to have that load share for workers who don’t have transportation options, right? We’ve got to build the facilities first,” says Sule.

“The idea that we’ve primarily built cities and our communities and success around car ownership, not only means that you’re leaving so many people behind. But those who have traditionally been left behind for so many other reasons, especially low income and communities of color. It’s an additional burden on progress for economic opportunity,” says Harris.

A recent report by the League of American Bicyclists shows that Black and brown riders are the fastest-growing segment of the cycling population and the increasing number of riders includes those who use bikes to commute; the biggest spike is found in third-shift and late-shift workers. “Freedom for human beings really accelerates with cycling,” says Harris. If you know how to ride and your community has good bike infrastructure, you have additional options, says Harris. Otherwise you are limited in where you can live, where you can look for work, and your ability to find and keep a job.

In New York City, Transportation Alternatives is working on launching the Equitable Commute Project, which would provide 10,000 bikes to essential workers in New York, “especially those in the outer boroughs,” says Harris. Currently a pilot program, the group hopes to expand it to other cities.

“You’ve seen the studies, you understand the facts. An impartial, rational mind [can see that] active transportation is an asset to urban development. Hard stop,” says Sule.