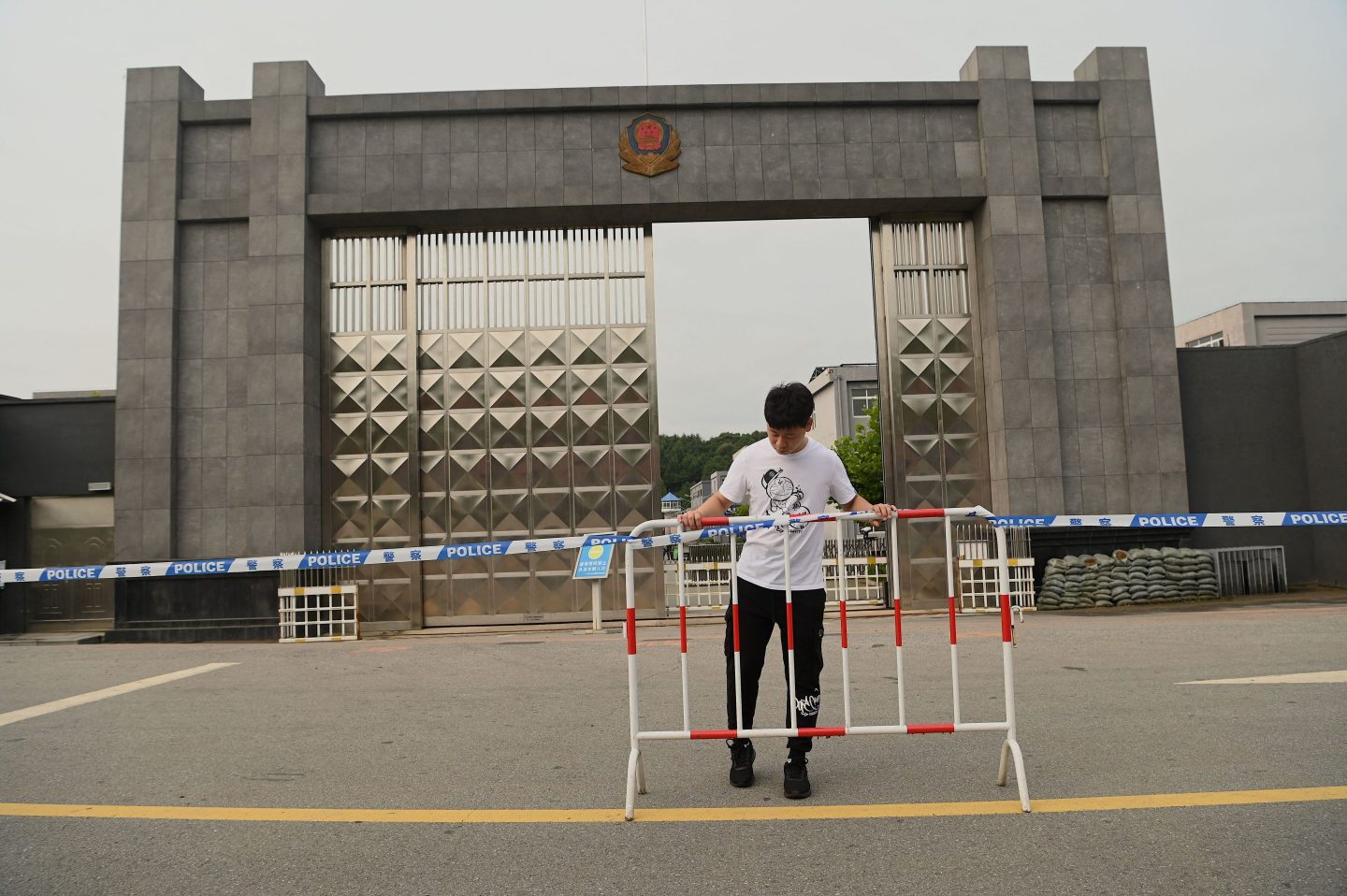 A man puts police tape in front of the Dandong city detention center where Canadian businessman Michael Spavor is being held on spying charges in the border city of Dandong in China's northeast Liaoning province on August 11, 2021.
Noel Celis—AFP/Getty Images

A Chinese court jailed a Canadian tour organizer for 11 years for spying, while leaving room for his eventual deportation—a ruling that appeared timed to pressure Ottawa in extradition proceedings against a top Huawei Technologies Co. executive.

Michael Spavor, who organized tours to North Korea, was sentenced after being found guilty of stealing and illegally providing state secrets to other countries, the Dandong Intermediate People’s Court said in a statement Wednesday. Spavor will also be deported, the court said, without elaborating whether that would happen after his full sentence and whether the almost 1,000 days he has already spent in detention would be deducted from his term.

Canadian Prime Minister Justin Trudeau condemned the verdict as “absolutely unacceptable and unjust” while David Meale, the top U.S. diplomat in Beijing, called the proceedings a “blatant attempt to use human beings as bargaining leverage.” Diplomats from 25 countries, including Japan, Germany and the U.K., gathered at the Canadian Embassy, in a gesture Ambassador Dominic Barton said showed Beijing “that all the eyes of the world are watching.”

The Canadian side interpreted the ruling as implying that Spavor wouldn’t be released until after prison, Barton told reporters via video link from Dandong. While sending Spavor back now could be seen as an olive branch, Beijing hasn’t indicated any desire to compromise on the cases while Huawei Chief Financial Officer Meng Wanzhou’s fate hangs in the balance in Vancouver.

The verdict was part of a flurry of court proceedings on both sides of this Pacific this week, as Meng waged a final fight against extradition to the U.S. for trial. Spavor is among a handful of Canadians who have faced stiff punishments in China since Meng’s December 2018 arrest, which the Communist Party views as a politically motivated attack on one of its chief technology champions.

Spavor’s detention along with that of Michael Kovrig—a Hong Kong-based analyst at the International Crisis Group and former Canadian diplomat—has fueled criticism of the expansion of “hostage diplomacy.” China has repeatedly linked the cases to Meng’s, with a Foreign Ministry spokesman saying last year that halting her extradition “could open up space for resolution to the situation of the two Canadians.”

China demanded Meng’s freedom during contentious talks with U.S. diplomats in Tianjin last month and the Globe and Mail newspaper reported in June that Canada and the U.S. have discussed a deferred prosecution arrangement that could lead to her release. Last week, U.S. President Joe Biden reaffirmed his opposition to the Canadians’ detentions during a call with Trudeau.

Barton declined to give specifics Wednesday about talks to free the two men. “All I can say is that in terms of the efforts we have underway is that there are intensive efforts and discussions, and that will continue as we have said before,” he said.

Spavor told Barton during a brief meeting after the verdict he was in good spirits and wanted to go home, the Canadian envoy said. Evidence presented during his secret, two-hour trial in March included photos when he was near airports that included military aircraft, Barton said, in some of the first details of the allegations against Spavor so far released.

On Tuesday, China upheld a death sentence for Canadian Robert Lloyd Schellenberg, who had seen his punishment for drug-trafficking increased to death on appeal in January 2019. Canadian diplomats have said they viewed the timing of the decisions as politically driven and Foreign Minister Marc Garneau condemned the decision to reject Schellenberg’s latest appeal.

Spavor has two weeks to decide whether to appeal the conviction. The timing of a verdict for Kovrig, who was tried days after Spavor in March, remained unclear, Barton said.

The U.S. has charged Meng with fraud, alleging that she lied about Huawei’s activities in Iran in violation of American trade sanctions. Meng, who denies any wrongdoing and accuses the U.S. of overreach, could face as much as 30 years in prison if convicted.

The case has Trudeau squeezed between two superpowers and complicated his domestic political situation days before he’s expected to call a federal election. Canadian public opinion has hardened against China because of its treatment of Spavor and Kovrig, alongside global criticism of China’s treatment of Uyghur Muslims and security concerns held by Canada’s Five Eyes allies.

The contrast between the treatment of each side’s prisoners has been stark during their legal ordeals. Initially subjected to hours of interrogation a day and kept in solitary confinement for six months, Kovrig was later moved to a cell with other prisoners, where he has described life as a “gray, grinding monotony.”

Meng wears a GPS anklet and has been held under house arrest in her Vancouver mansion, passing her time oil painting and shopping at high-end boutiques accompanied by court-appointed private security. She has had months of public hearings to make her case, including proceedings in the British Columbia Supreme Court Tuesday, in which her lawyers argued that letting Meng face fraud charges in New York would encourage abuse by American authorities.

“Misconduct of this sort cannot ever be tolerated, for to do so is to condone, perhaps even to invite, similar conduct,” one of her lawyers, Tony Paisana, told the court.