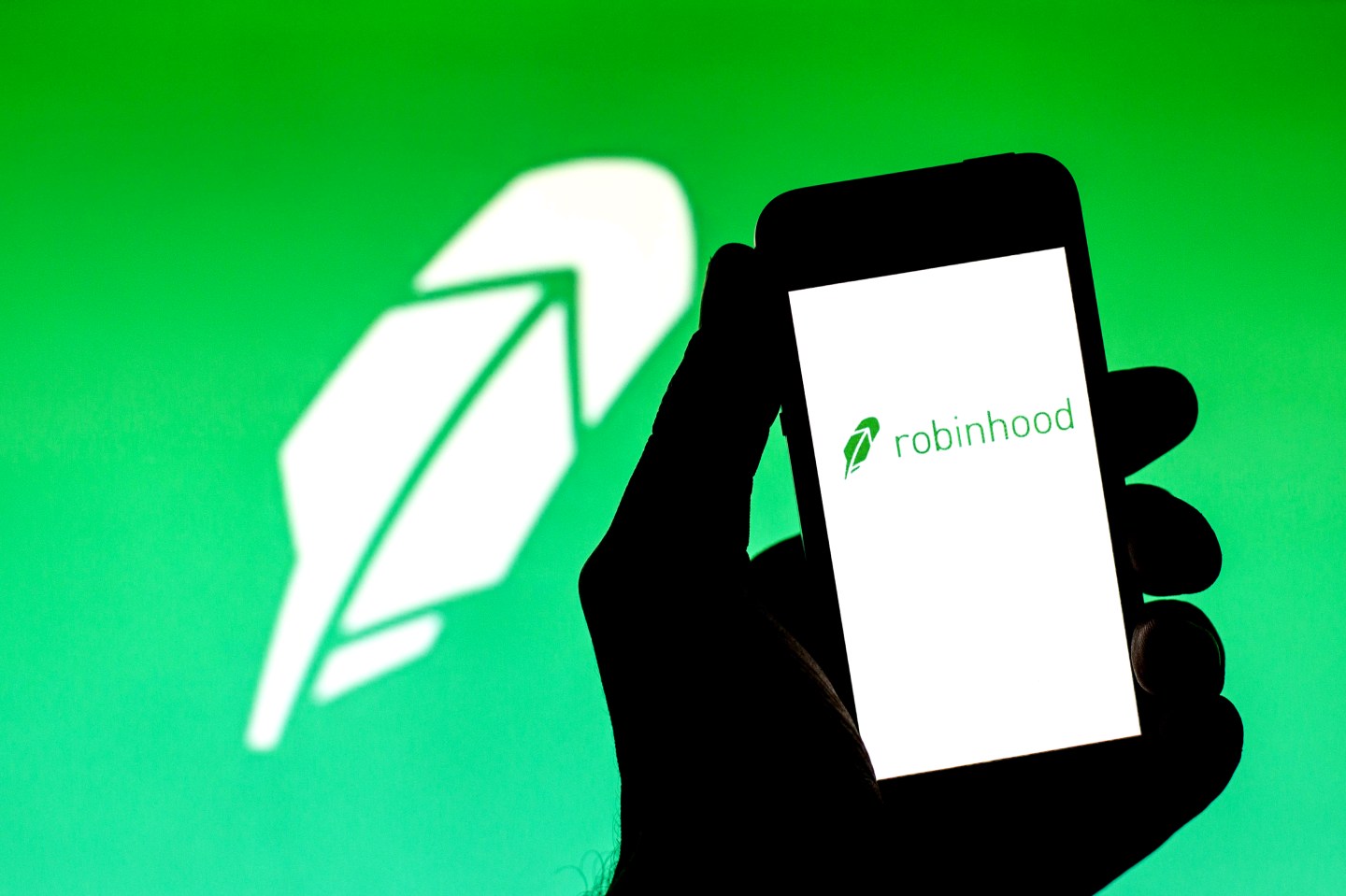 With Robinhood's IPO, writes Jan Hammer, "what we’re witnessing isn’t just product innovation, but a generational reimagining of what finance is and who it’s for."
(Photo Illustration by Thiago Prudencio/SOPA Images/LightRocket via Getty Images)

How many of you carry a wallet? Five years ago, that would have been a preposterous question. But now, I’d wager, a fair share of readers leave their glorified leather envelopes at home when they step out of the house. Instead, a smartphone is now enough to get you through the day, not to mention being easier and more secure.

The disappearance of the wallet is a symbol of what’s happening to financial services more broadly. Having endured decades of restricted choice and head-bangingly bad customer service, consumers are embracing the dynamic, digitally native and delightful array of new experiences that a new generation of fintech companies have put on the table. Today’s IPO of Robinhood—the wildly popular commission-free stock trading platform, which Index has been an investor in from the start—is only the most recent manifestation of this sea change. After decades of stasis and complacency, what we’re witnessing isn’t just product innovation, but a generational reimagining of what finance is and who it’s for.

Those who are winning in this new world grasp that, paradoxically, finance isn’t only or even primarily about money. Instead, it’s about lifestyles, experiences, and the intangible but vital things that people care deeply about: health, wellbeing, productivity, relationships. Stitched together by digital and mobile, financial services are becoming ever more interwoven into the fabric of our daily lives—and as a consequence, they’re becoming invisible.

The financial crisis as a turning point

The ascendancy of fintech from a fringe operation to a force that’s reshaping the world hasn’t been a long, unbroken rise. Conventional wisdom long held that many financial sectors were simply too hard to crack: insurance, investing, payments, tax, and more. There were too many large players, the doubters said, and too much red tape. Capital and compliance burdens were just too onerous. But the financial crisis was a turning point, revealing the ugly truth beneath the big banks’ pretensions to solidity. It created an opening for startups to win customer trust, and to begin taking aim at banks’ traditional services.

Once barriers to financial disruption started to fall, capital and talent flocked to the opportunity. The size of the prize is huge: The banking sector alone has been estimated to have a market capitalization of $7.9 trillion. But its appeal goes further. Finance isn’t a “winner-takes-all” market. Rather, each subsector is able to support several suppliers, which are met on the other side by a deepening well of consumer demand. Even when someone’s immediate financial need is satisfied—for a loan or an insurance policy, say—it’s always possible to penetrate deeper into their financial life and serve them up more and better services. There’s almost always room for new players to take a greater share of an ever-expanding pie.

From here, we can see three key shifts that signal fintech’s new status as the imperceptible layer enabling 21st-century economic and social life. In short, these are: rewiring “back-end” financial infrastructure so it’s faster, cheaper and more efficient; bringing in entirely new customers, neglected up until now; and making delightful, frictionless financial experiences so commonplace as to become invisible.

First up is the way new technologies have cut out middlemen, slashed prices and reduced friction. Fintech companies aren’t just shaving off and repackaging services as they’ve existed for decades, like asset management, credit cards, auto financing, savings or brokerage. They’re not simply lining up better versions of the same products in the shopfront window. Instead, companies such as Codat and Plaid, which Index has also backed, are revolutionising the way data moves behind the scenes and through the financial system as a whole—as well as translating it so it can “talk” to other kinds of data in real-time. Such machine-to-machine communication isn’t just driving down prices, but fueling whole new product categories and experiences.

Re-laying the rails of finance is what’s let new fintech tools achieve their increasingly ubiquitous—and invisible—role in our daily lives. That pervasiveness fuels a second key transition, which involves welcoming a wider array of people into the financial system, including the unbanked and underbanked. Such inclusion isn’t just a good thing in and of itself, but also allows for entirely new business models to take root. A more diverse customer base means companies can shift away from opaque pricing based on spreads, commissions and minimum spends. Instead, they can embrace free or low-cost models with a premium service baked in, looking to add value beyond what the banks typically charge for.

Robinhood shows what it means to build a company with an ethos of financial inclusion. They recognised that many millennials, for example, don’t want to invest in exchange-traded funds that simply track the performance of particular sectors or the stock market as a whole. Instead, they want to own the shares of the products they consume online and that reflect who they are in some meaningful way. In fact, brand identity is beginning to matter to finance in a way that’s totally new. Instead of being neutral about the financial institutions you’re dealing with, those choices might soon say as much about you as the clothes you wear or the music you listen to.

By allowing people to make trades for free, Robinhood shook up the whole market and brought in an entirely new cohort to the trading floor. Thanks to its intuitive investment platform, millions have learned to deal in equities, cryptocurrencies and options. Robinhood believes that ordinary people shouldn’t be shut out from the gains available from assets and investment, which after all have dwarfed wages in recent decades. Robinhood wants to help people get these returns, even if they don’t have tons of spare cash lying around to meet the requirements for standard brokerage. The company’s trajectory demonstrates how inclusion means more customers—and more customers means you can charge them less, charge them differently, and provide a better-quality service overall.

Banks simply can’t compete here, because to do so would cannibalize their most profitable revenue streams. In fact, a third and final feature of this new financial world is that the very meaning of “finance” is becoming pretty slippery.

Every business is a fintech

Slowly but surely, every business is becoming a fintech. From Uber offering car finance to their drivers, or another Index portfolio company, Service Titan, which allows plumbers to book and receive payments direct to their bank account, fintech has an angle on every industry. Financial products can be the wedge for other value-added services, while non-financial products invariably require a financial component to run smoothly. Unlike banks, tech companies might not need to make money off their financial products, since their core revenue might come from elsewhere. So in future, your health insurance might come from Peloton or Apple; your loan might come from Patreon. We can expect superb deals for financial products to pop up in unusual places.

All this has involved rethinking financial services from top to bottom, and rewriting the DNA of products to fit the demographic preferences, choices and habits of a new generation. From the point of view of those people, fintech’s ascendancy adds up to better, cheaper products and a bigger, more dynamic economy. But it also comes with risks. Startups can quickly find themselves under pressure once they hit the mainstream. For regulators, the worry is that they’ll overreact or misunderstand technologies and business models. For banks and legacy institutions, they’ll need to learn that just copying features doesn’t count as being part of a paradigm shift, and simply won’t cut it with shifting customer expectations.

The surest sign that fintech is reshaping our economies and societies for the better will be the fact it’s following the fate of our wallets, and disappearing. So don’t be fooled or alarmed if the word “fintech” falls out of the lexicon. When the smartphone first hit the market, nobody could have predicted what it would go on to unleash. Even with a once-in-a-generation transformation like Robinhood under our belts, the biggest changes—changes that will one day seem as commonplace as a credit card or tapping-to-pay—are still on the horizon.

Jan Hammer is a partner at Index Ventures, a backer of numerous fintech startups including Robinhood, Adyen, Plaid, Revolut and Wise.