Simone Biles and the power of putting yourself first 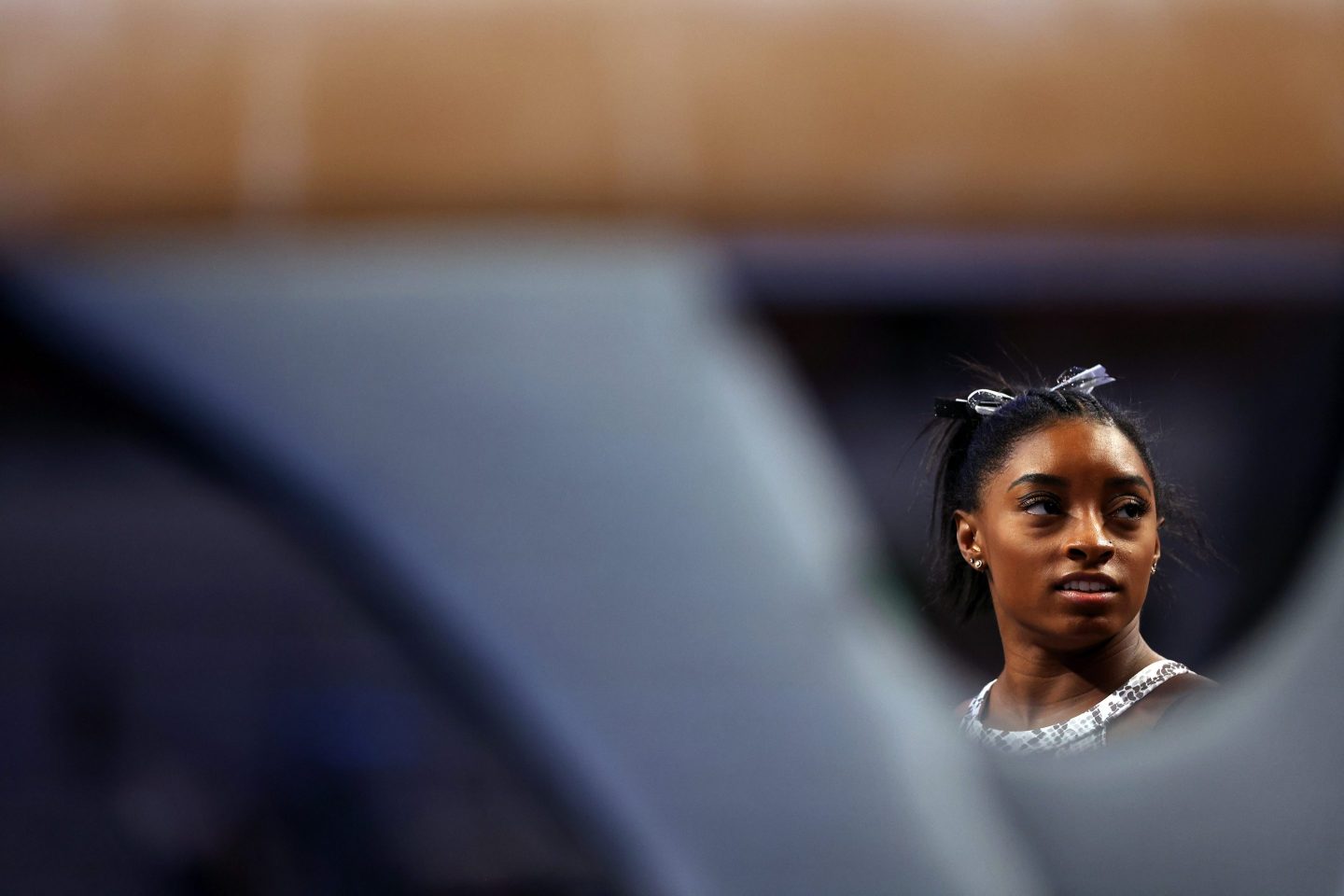 Simone Biles prepares to compete on the balance beam during the Senior Women's competition of the U.S. Gymnastics Championships at Dickies Arena on June 6, 2021 in Fort Worth, Texas.
Jamie Squire—Getty Images

Good morning, Broadsheet readers! Congress hears testimony about Jan. 6, employees are set to walk out at Activision Blizzard, and Simone Biles is still the GOAT, no matter what. Have a wonderful Wednesday.

– Still the GOAT.  By now, you’ve surely heard the Olympics news: Simone Biles took herself out of the running in gymnastics team and individual all-around competition after realizing that her mental health wasn’t where it needed to be to compete.

It was a brave, bold move for one of the biggest stars on the Olympics world stage. Biles, known as the greatest of all time, who competes at a level so far beyond her peers that judges can’t decide how to score her skills, stepped back and decided she needed to take care of herself first—over her fans, Team USA, and the sky-high expectations she faced.

“[I] felt like I was still doing it for other people,” Biles said she realized. She worried how competing when she wasn’t at her best mentally could hurt her physically. Remember that that pressure is likely not just your typical sports fandom; Biles has said one reason she chose to return to the Games at the gymnastics-elderly age of 24 was so that a survivor of Larry Nassar’s abuse would still be on the mat, forcing USA Gymnastics to reckon with its past failures as a new generation of athletes rises.

Hearing Biles explain her decision, I couldn’t help but applaud. How many of us, with the weight of our country on our shoulders, facing expectations to perform at our peak to give the world a moment of joy during a pandemic, would have the presence of mind to know when to stop?

The gymnast’s courage is something we can all learn from. When’s a time you’ve known you’ve been pushed past your limit at work, but felt like you couldn’t say no? Biles can set an example for all of us—and she may not have been able to do so without a role model of her own to follow. The gymnastics star says she was inspired by tennis champion Naomi Osaka’s decision to prioritize her own mental health and skip press conferences and a tournament earlier this summer.

It’s not clear yet whether Biles will compete in the apparatus finals that start on Sunday; even if she doesn’t, the lesson she’s imparted may have a more lasting legacy than any more gold medals could.

- Jan. 6. During the first hearing of the Congressional committee examining the events of Jan. 6, the Capitol insurrection, GOP Rep. Liz Cheney urged her party members to support a full investigation, including of President Trump's actions. She's one of just two Republicans on the panel. Washington Post

- Wednesday walkout. After California sued Activision Blizzard over harassment at the gaming company, employees are staging a walkout today. With the hashtag #ActiBlizzWalkout, employees are calling for an end to forced arbitration; changes to hiring and promotions processes to improve diversity; transparent salary and promotion data; and a third-party audit of executive staff. Activision has denied the allegations in the lawsuit. The Verge

- Extra, extra. Some good news in the world of journalism: most big American newspaper newsrooms are now led by someone other than a white man. Of the 20 top papers, 12 are led by a woman or person of color. Nieman Lab

- Fan club. Masomah Ali Zada is a cyclist competing on the Refugee Olympic Team. Before she left Afghanistan and claimed asylum in France, Ali Zada was a member of the national cycling squad, and her former teammates in Kabul are now cheering her on. Guardian

- Remote chief. There's a new route to the C-suite: remote work czar. Companies are making the position an executive-level role in the era of return-to-office and hybrid work. Bloomberg

- Hijab ban. The lower house of the French parliament last week passed the controversial secularism bill that further limits where and how Muslim women can wear headscarfs in public. In this story, three Muslim women share how the legislation makes them feel. Guardian

She changed astronomy forever. He won the Nobel Prize for it New York Times

"We cannot go back to how it was."