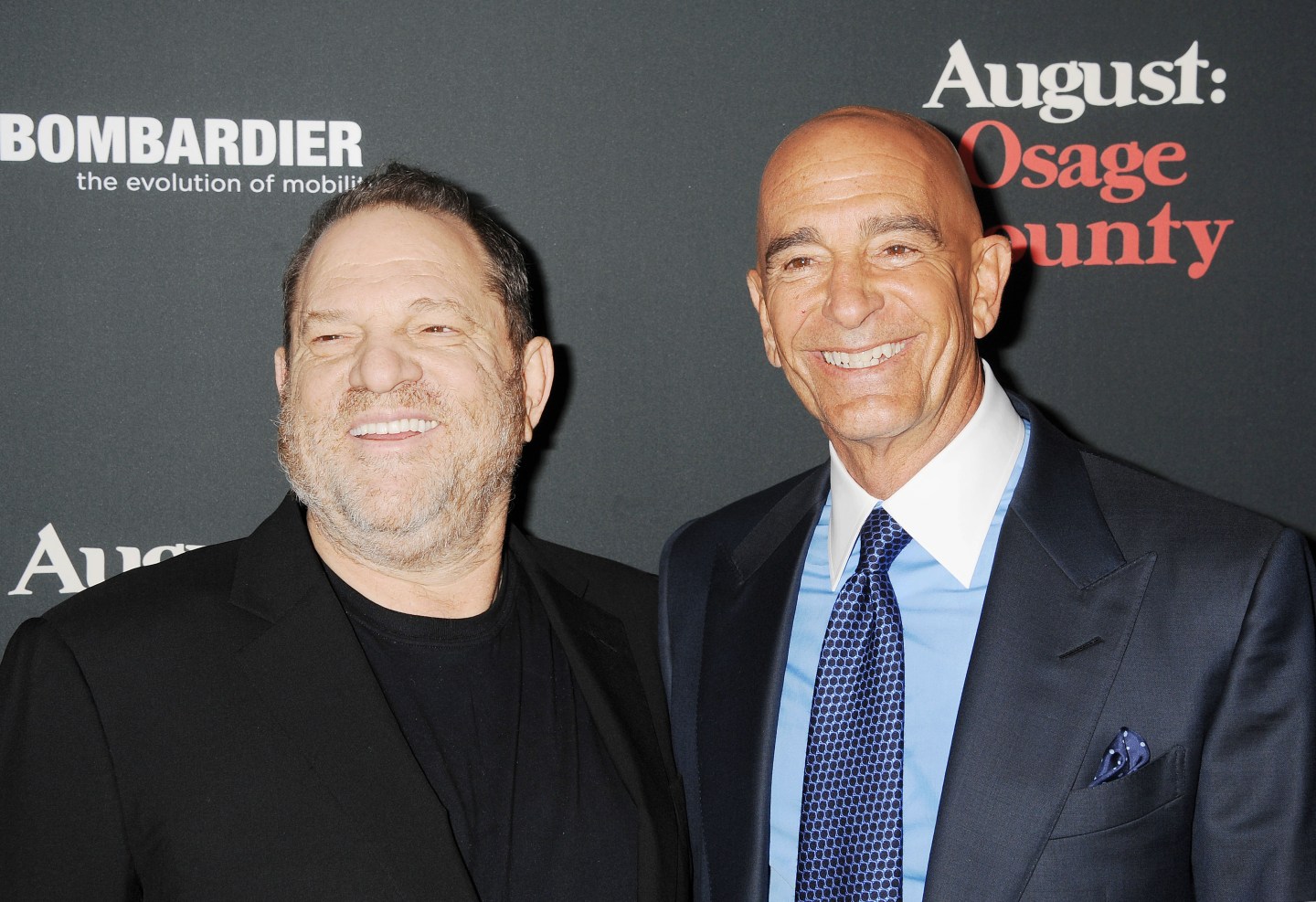 A close advisor to former President Donald Trump and one of his top fundraisers in 2016, private equity investor Tom Barrack was charged last week with acting as an agent for the United Arab Emirates.

While he is set to be freed on a $250 million bond ahead of a trial, those charges—including accusations of obstruction of justice—are already rippling through his finances.

On Friday, a blank check company backed by Barrack, Falcon Peak Acquisition Corp., requested to withdraw its application shortly before news of his release from jail was announced. Unsurprisingly, the SPAC itself was light on the details in terms of why it made the request, only saying “the Company has elected to abandon the transaction.”

Backed by TI Capital Management and Falcon Peak Partners, a family office of Tom Barrack, the SPAC had planned to acquire a “technology-driven” business that would benefit from a post COVID-19 world. The SPAC first filed a draft of a registration statement in October to raise about $400 million, though as scrutiny over the broader SPAC space grew, it also tempered its expectations, saying it would seek to raise about $250 million instead in March.

But the dollar amount was not the only thing that changed between those two filings either. Interestingly enough, while Barrack’s Falcon Peak Partners kept boilerplate language in its description about its network spanning “North America, Europe, Africa, Asia and the Middle East,” TI Capital scrubbed references of its leader’s achievements in the Middle East by the March—though it still says it maintains office in the area on its website.

“As a director of a public U.S. midstream oil and gas company during the early 2000s, [Ziad Ghandour] headed overseas expansion with deals in Africa, the Middle East and Asia, while also building a successful project management and consulting business in the Middle East,” the October draft registration filing stated of Ghandour, who founded TI Capital and was to be the SPAC’s CEO. That was replaced by “ Mr. Ghandour advised Syntroleum on both international expansion and vertical integration as he helped the company expand from a Tulsa-based service provider to upstream exploration operations in West Africa” by March.

It’s still unclear exactly why the change was made. TI Capital has yet to respond to immediate requests for comment.

But one thing is certain: Barrack indictment—making him just one of a list of those with Trump ties who have been charged—is certainly a reminder as to why so many are so wary of working with the former president’s advisors.

EVERYBODY HURTS: Driven in part by concerns of low birth rates in the country, China made a set of sweeping changes over the weekend, ordering companies that offer tutoring of school curriculum to become non-profits. The high cost of education in the country makes it economically difficult to raise a second child. That threatens the gains made by public investors such as Tiger Global Management, Temasek, Warburg Pincus, and SoftBank Vision fund who have made big bets on the sector, per Bloomberg. While EdTech has been slow to take off in the U.S., one of China’s most valuable startups is a $15.5 billion teaching app maker, Yuanfudao.

Jessica Mathews compiled the IPO and SPAC sections of the newsletter.

- NotCo, a New York City-based maker of plant-based foods, raised $235 million in Series D funding. Tiger Global led the round valuing it at $1.5 billion. Other investors include DFJ Growth Fund and ZOMA Lab.

- Teamflow, a virtual office company, raised $35 million in Series B funding. Coatue led the round and was joined by investors including Menlo Ventures’ Naomi Ionita and Battery Ventures’ Neeraj Agrawal.

- Eterneva, an Austin-based grief and wellness startup, raised $10 million in Series A funding. Tiger Management led the round and was joined by investors including Goodwater Capital, Capstar Ventures, NextCoast Ventures, and Mark Cuban.

- Sproutl, a U.K.-based gardening tech start-up, raised $9 million in seed funding. Index Ventures led the round and was joined by investors including Ada Ventures.

- Guidewheel, a San Francisco Calif.-based maker of software for manufacturing companies, raised $8 million in Series A funding. Greycroft led the round.

- Visionary Machines, an Australian computer vision startup, raised AUD $7.5 million ($5.5 million USD) in seed round funding. Folklore Ventures led the round and was joined by investors including Our Innovation Fund.

- Duolingo, a Pittsburgh-based language learning app company, now plans to raise up to $510.6 million in an offering of 5.1 million shares priced between $95 and $100 per share—it had previously planned to price its shares between $85 and $95 per share. The company generated $161.7 million in revenue in 2020, and reported a net loss of $15.8 million. Union Square Ventures, CapitalG, and General Atlantic back the firm.

- Caribou Biosciences, a Berkeley, Calif.-based clinical-stage biopharmaceutical company, raised $304 million in an offering of 19 million shares priced $16 per share—it previously planned to raise up to $272 million. DuPont and F-Prime Capital back the firm.

- SOPHiA GENETICS SA, a Switzerland-based biotech, raised $234 million in an offering of 13 million shares priced at $18 per share. Alychlo and Balderton Capital back the firm.

- The Better Being Co., a Salt Lake City-based supplements company, plans to raise up to $212.5 million in an offering of 12.5 million shares priced between $15 and $17 per share. The company posted $319.3 million in net sales in the year ending in September 2020, and it reported a net loss of $32.7 million. HGGC, The Maze Group, and Snapdragon Capital Partners back the firm.

- MaxCyte, a Gaithersburg, Md.-based cell engineering technology company, plans to raise up to $162 million in an offering of 12 million shares priced between $11.50 and $13.50 per share. The company reported $26.2 million in revenue in 2020 and $23.4 million in gross profit. Casdin Capital and Sofinnova Partners back the firm.

- Tenaya Therapeutics, a South San Francisco-based heart disease treatment company, plans to raise up to $160 million in an offering of 10 million shares priced between $14 and $16 per share. The company reported a $38.9 million loss in 2020 and has yet to post revenue. The Column Group, Casdin Capital and Fidelity Investments back the firm.

- Omega Therapeutics, a Cambridge, Mass.-based development-stage biotechnology company, plans to raise up to $133.2 million in an offering of 7.4 million shares priced between $16 and $18 per share. The company reported a loss of $29.4 million in 2020 and has yet to post revenue. Flagship Pioneering and Fidelity Investments back the firm.

- Immuneering Corporation, a Cambridge, Mass.-based drug discovery company, plans to raise up to $112 million in an offering of 7 million shares priced between $14 and $16 per share. The company generated $2.3 million in revenue in 2020 and reported a loss of $17.1 million. Cormorant Asset Management, Surveyor Capital, Rock Springs Capital and T. Rowe Price back the firm.

- Rani Therapeutics, a San Jose, Calif.-based oral biologic drug company, plans to raise up to $106.7 million in an offering of 7 million shares priced between $14 and $16 per share. The company posted $462,000 in contract revenue in 2020 and reported a $16.7 million net loss.  InCube Ventures backs the firm.

- Candel Therapeutics, a Needham, Mass.-based immunotherapy company, now plans to raise $72 million in an offering of 9 million shares priced at $8 per share—it had previously planned to raise up to $91.1 million and price shares between $13 and $15. The company posted $125,000 in revenue and a net loss of $13.8 million in 2020. PBM Capital and Northpond Ventures back the firm.

- Jam City, a Culver City, Calif.-based mobile games company, called off a merger with DPCM Capital, a SPAC. A deal, which would’ve included the acquisition of game publisher Ludia, could’ve valued the business at $1.2 billion.