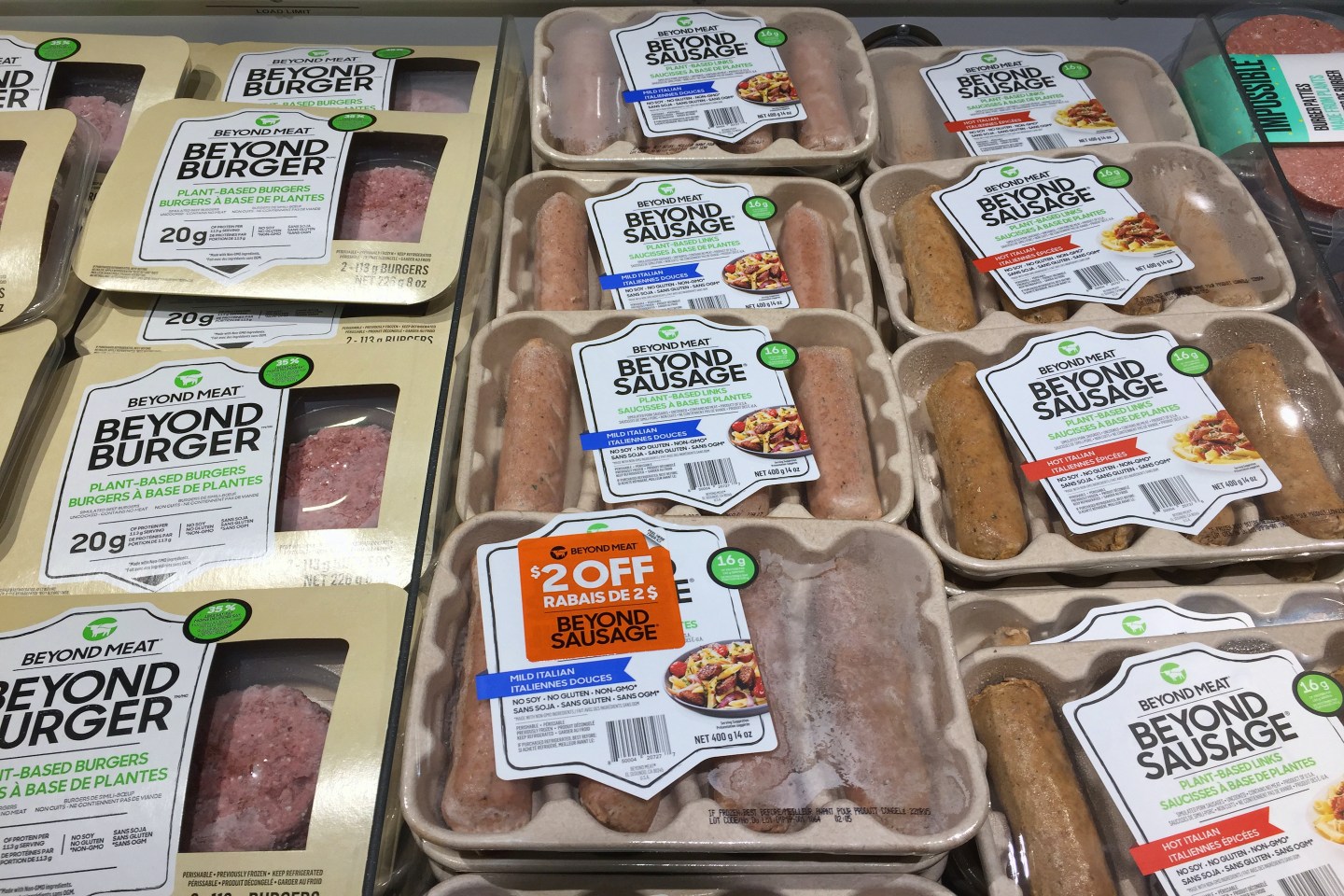 Beyond Meat is coming out with a line of faux chicken tenders in the U.S.
Creative Touch Imaging Ltd/NurPhoto/Getty Images

Beyond Meat Inc.’s breaded faux-chicken tenders are launching Thursday, ending a long wait for investors hoping to see if the company can replicate its success in plant-based beef.

Chicken is the most popular meat in the U.S., so converting even a portion of existing demand to plant-based would be a boon. Still, Beyond’s fava-bean-based tenders—its first new mass-market “animal” since it launched a pea-derived sausage in 2017—are entering a crowded market with a smaller rollout than other national launches, in fewer than 400 U.S. restaurants.

Restaurants are taking advantage of the options: Plant-based chicken substitutes shipped to U.S. commercial restaurants are up 19% by volume compared with two years ago, before the pandemic, and 15% compared with last year, according to NPD Group’s SupplyTrack.

Beyond said it plans to expand the tenders soon from their modest initial roster of restaurants into more eateries, as well as hotels, college campuses, stadiums and other venues. The company declined to share a date for a supermarket launch, but multiple retailers say they have been pitched a Beyond chicken product. Major U.S. food distributors including Dot Foods Inc. and Sysco Corp. are carrying the product. Baldor Specialty Foods Inc., a New York-based restaurant distributor, currently has the item in stock, said Kevin Lindgren, director of merchandising. He envisions it as a successful addition to fast-casual restaurants, country clubs and kids menus.

“The product is awesome, it’s so flavorful, we really think it’s going to be a permanent menu item,” said David Grossman, chief executive officer of Epic Burger, a seven-location chain in the Chicago area. It will be selling three tenders for $8.99 and a two-tender wrap at the same price.

The rollout is dwarfed by the customer count of other products, such as the more than 9,000 Dunkin’ locations that originally sold Beyond’s sausage, or the more than 1,500 Denny’s Corp. restaurants that began listing the Beyond Burger nationally on menus in 2020. While the burger and sausage products were available at 39,000 foodservice locations in the U.S. at the end of the first quarter, several current customers told Bloomberg News they didn’t have immediate plans to sell the tenders—and some are selling competing products instead. Denny’s isn’t testing any chicken alternatives in restaurants yet, but it’s still selling the Beyond Burger nationwide, CEO John Miller said in an interview.

HipCityVeg, a seven-location chain in Philadelphia and Washington that says the Beyond Burger is a top seller, is also unlikely to sell the new chicken product. It prefers its own “signature” batter for its crispy faux-chicken items, which are made with Gardein, said Nicole Marquis, founder and chief executive officer.

BurgerFi International Inc., an animal-based chain with about 120 locations and more under construction, considers Beyond’s alt-chicken product “phenomenal,” according to Chief Culinary Officer Paul Griffin. But he isn’t going to sell it, due to the restaurant industry’s own internal turmoil. With supply-chain problems on its major items and staffing shortages, the company isn’t complicating matters with new menu items. “It’s silly to add new products when you can’t get basics,” Griffin said.

Beyond said McDonald’s Corp., which is testing a McPlant pea-protein burger overseas that the companies co-developed, won’t be selling the chicken tenders. McDonald’s declined to address its faux-chicken plans.

In January 2020, when Beyond Meat launched a second faux-chicken trial with Yum! Brands Inc.’s KFC, CEO Ethan Brown boasted of the advances in the company’s “whole muscle” chicken technology, even compared with its first KFC test the prior summer.

“If you look at what we launched with in Atlanta versus what we’re doing today, we all agreed that we need to get that muscle-like structure,” Brown said in an interview at the time. “We could have done a formed product very easily,” but ultimately Beyond and the team at KFC were on the same page, he said: “Let’s make something that’s really, really a step above.”

KFC is evaluating test results for that Beyond fried chicken product now as it discusses potential plans for a national rollout, the chain said in a statement.

The tenders launching Thursday aren’t in a whole-muscle format, even as Lightlife and Kellogg Co. both launched such products in the spring. Beyond said the new offering isn’t a “step back” from the higher-end technology, adding that it’s “less expensive to make it this way” and therefore more accessible to a broad market.

“This specific product is chop-and-form,” Dariush Ajami, chief innovation officer at Beyond Meat, said in an interview. “We are also innovating in that type of product, where you could see the fibrous structure, the whole muscle. It’s not that we choose one over the other.”

The whole muscle is a much harder product to make, said Barb Stuckey, president and chief innovation officer at food advisory firm Mattson. It requires expensive equipment and the flavoring is more difficult.

All in all, though, the payoff is worth it to some producers. “People can tell the difference in their mouth, in the way the small pieces break apart—it’s very different from chewing into a long, intact muscle fiber,” Stuckey said.

Epic Burger’s Grossman said he isn’t concerned about the chopped-and-formed format. “If it was actual chicken, I would much rather the whole muscle, but it’s plant-based,” he said. “Knowing that it’s plant-based, the texture doesn’t bother me one bit. When people taste this, they’re going to fall in love with it.”

Beyond’s new tender is heavily breaded and salted, creating a tasty, crispy exterior; the “meat” inside is also flavorful, if slightly chalky when eaten on its own.

The chicken tenders’ nutritional metrics are similar to those of competitors’ animal-based products, with 230 calories per serving and 490 milligrams of sodium—21% of the recommended daily allowance. That’s about the same as Tyson Foods Inc.’s crispy chicken strips.

Reducing sodium is “high on our list,” Ajami said, adding that much of it comes during “protein purification,” and “we are actively working to reduce that.” He pointed out that the tenders are 40% lower in saturated fat than similar animal-based products.

Among the ingredients in Beyond’s tenders is titanium dioxide, an additive frequently used in the U.S. as a bleaching agent. This could limit Beyond’s ability to sell the product in Europe. In May, the European Food Safety Authority concluded the substance “can no longer be considered safe as a food additive” because it still had concerns about its potential to damage DNA. A full European ban on the ingredient could follow. The U.S. Food and Drug Administration is reviewing the data and findings of the EFSA report, an FDA spokesperson told Bloomberg.

In a statement, Beyond Meat noted that titanium dioxide is FDA-approved and is “commonly used” in the industry.

Still, some observers would prefer not to see it in Beyond’s—or competitors’—products. “Based on this new assessment, I hope companies will rethink their use of titanium dioxide,” said Lisa Lefferts, a senior scientist at the Center for Science in the Public Interest, a health advocacy organization.