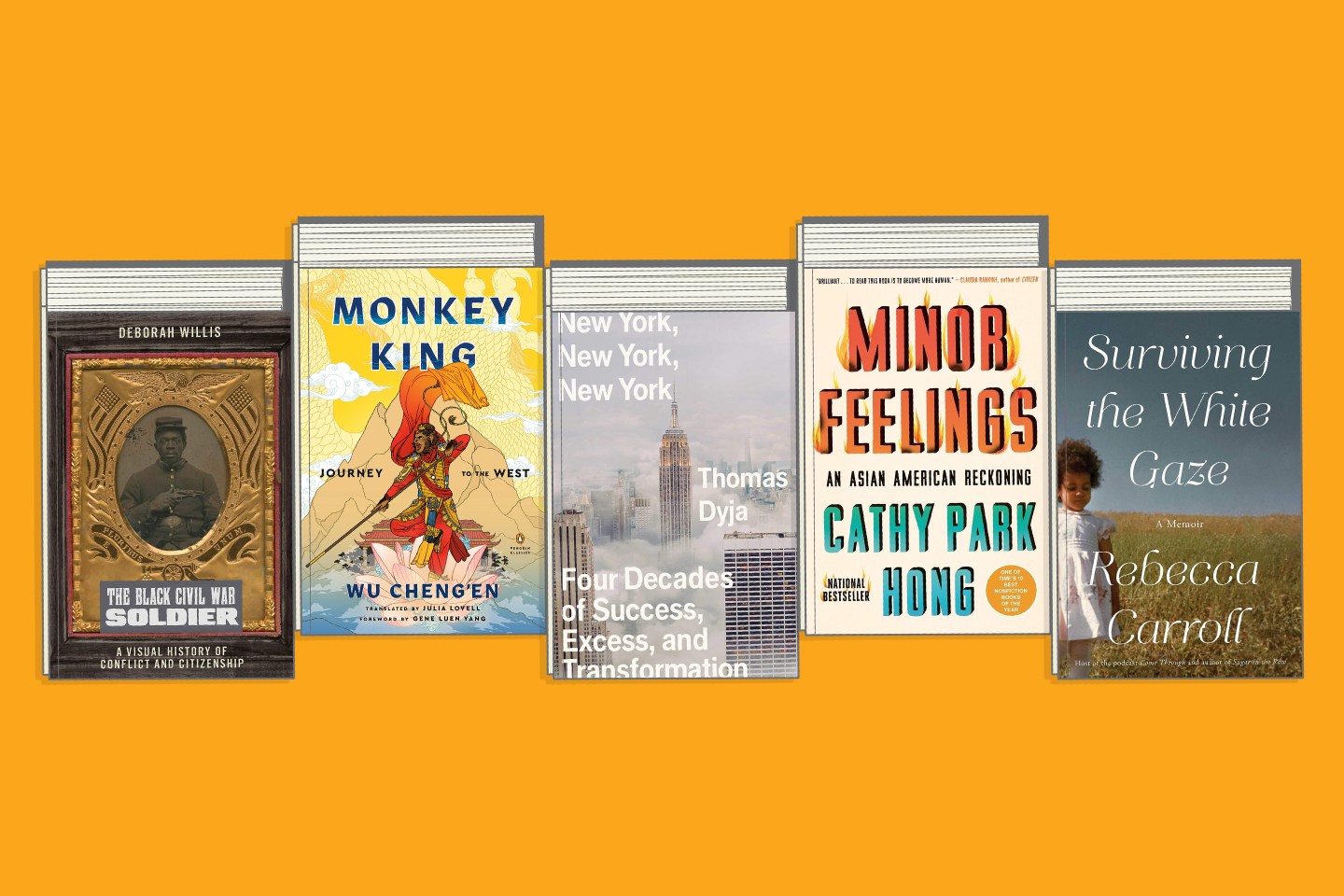 With only half the year done, there has been no shortage of excellent work in both fiction and nonfiction.
Courtesy of New York University Press; Penguin Group; Simon & Schuster; One World

While there were some initial adjustments and cancellations during the early months of the pandemic last year, the book industry rallied, and online sales at least have been booming ever since.

As a result, many publishers continued through with planned releases in 2021, and there has been no shortage of excellent work in both fiction and nonfiction.

Here are some of the best books published in 2021 to date, as read and nominated by the staff of Fortune, in no particular order.

The Americana singer looks back at the tumultuous path that led her to become one of her generation’s most celebrated artists, including an adolescence in which she grappled with poverty, family dysfunction, and acceptance as a lesbian. The insightful, easy-to-read book also contains fun gossip—such as what it’s like to party with Elton John and Joni Mitchell—and for the business reader, it provides an interesting front-row look into how the music biz really works. —Phil Wahba, senior writer

This tome looks back at how New York City reinvented itself after hitting its 1970s nadir when people and businesses were fleeing the city. The author chronicles how big business, government, and New York characters all played a role in making the metropolis the richest and safest it had ever been by the time COVID struck, surviving big setbacks such 9/11 and the financial crisis along the way. At a time when some naysayers claim New York is done for, while others (perhaps too optimistically) predict the city will emerge better than ever from the pandemic, Dyja’s book offers instructive clues in how New York, and other cities for that matter, can bounce back yet again. —P.W.

Land of Big Numbers is a revelatory short story collection. From a ripped-from-the-headlines vignette about a rural farmer trying to build a plane, to a surreal allegory about passengers trapped in a station waiting for a train that never arrives, Chen’s writing gives readers just enough to leave them wanting more. It’s a must-read from an up-and-coming fiction writer. —Nicholas Gordon, associate editor

Monkey King: Journey to the West by Wu Cheng’en, translated by Julia Lovell

Journey to the West and its breakout star, Sun Wukong—also known as the Monkey King—have charmed readers in East Asia for generations. References to its stories, characters, and tropes span popular culture from movies and TV shows to comic books and video games. This accessible translation by Julia Lovell for Penguin Classics allows Western readers to discover Monkey King’s mix of spiritual transcendence, slapstick humor, and deep satire for themselves. —N.G.

‘Empire of Pain: The Secret History of the Sackler Dynasty’
Courtesy of Doubleday Books

Empire of Pain: The Secret History of the Sackler Dynasty by Patrick Radden Keefe

I thought I knew the story, more or less, of the Sackler family and OxyContin. But I was continually amazed, shocked, and yes, horrified. You wouldn’t think you’d want to stay up late reading about the opioid crisis, but that’s what I did until I’d finished this propulsive read. —Katherine Dunn, editor

Broken (in the best possible way) by Jenny Lawson

Mental health is finally getting the attention it deserves in the general consciousness, but there’s still a long way to go. Jenny Lawson does the subject incredible justice with a sardonic but candid memoir about her struggles with anxiety and depression. But what makes it so effective is that the book isn’t simply about Lawson: She is extremely aware of the people around her, struggling to support her (and fearing for her life), and wary of a health care infrastructure that doesn’t adequately support mental health at all. (The chapter about her insurance provider would induce secondhand anxiety and frustration in just about any reader, but at least many of us can relate and commiserate.) —Rachel King, editor

Crying in H Mart: A Memoir by Michelle Zauner

Crying in H Mart is billed as a memoir of Korean-American musician Michelle Zauner, but it acutely homes in on the author’s relationship with her mother. The inspiration for the title stems from a childhood incident at H Mart, a Korean-American supermarket chain, illustrating the kind of relationship the two women would have up until her mother’s sudden cancer diagnosis. Zauner is honest and frank about how she perceived her mother, and how she was decidedly different from other American mothers and what that meant to her. But in her grief, Zauner is steadfast in the realization that no one would love her more than her mother, no matter how tough on her daughter she might have been. —R.K.

This Close to Okay by Leesa Cross-Smith

It’s hard to define what kind of novel This Close to Okay is. Depending on who is reading it, it could be considered literary fiction, or women’s fiction, or even a romance novel. But what remains constant is the strength of the character development between the two protagonists and Leesa Cross-Smith’s fluid writing style. (I finished this in one day; I couldn’t put it down and haven’t stopped thinking about it since February.) There are so many serious themes both beautifully and brutally examined in this novel, but on a completely superficial note, I can’t help but also deeply appreciate the detailed attention to daily skin care routines. —R.K.

Surviving the White Gaze: A Memoir by Rebecca Carroll

Rebecca Carroll has created an enormous body of work exploring themes of race, truth, identity, expression, and exclusion. In this extraordinary memoir, she turns her enormous talents inward, chronicling her complex life and personal search for an affirmation of her Black self in a primarily white world. Make no mistake: It is, at its core, a beautifully rendered story filled with rich and layered characters. The well-meaning and liberal white couple who adopted her. The spirited white teenager who gave her up and yet stayed a part of her life. The Black father she never knew. The all-white town in rural New Hampshire where Carroll was raised. And then, adulthood. Steeped in a world unable to see her, her quest to see herself is a wrenching and hopeful tale of struggle and acceptance. —Ellen McGirt, senior editor

This slim volume by award-winning designer, author, educator, and Design Observer cofounder Jessica Helfand is in part, a gorgeously reimagined new edition of Emerson’s original 1841 essay, then, a call for perspective during time of tremendous cultural upheaval. Helfand does the world a favor by adding 12 essays of her own—with titles like “On Closure, On Chance, On Uncertainty”—which helps modern readers process this current moment of upheaval with much-needed Emersonian grace. —E.M.

No Blanks, No Pauses: A Path to Loving Self and Others by Shelly McNamara

Few corporate C-suiters have been able to excavate a painful past for wisdom and inspiration as compellingly as McNamara, the chief equity and inclusion officer for global consumer goods giant, P&G. Fewer still are published poets. But McNamara combines the two in an effortless memoir that serves as a blueprint for self-acceptance, authenticity, and intentional joy, and an essential read for anyone who is striving to foster a welcoming culture and productive teams. She will win your heart. —E.M.

Courtesy of One World

This gloriously candid collection of essays—one part memoir, one part reverie on Asian American identity in the U.S.—arrives on bookshelves at a time when national conversations about otherness, “model” minorities, and violence against Asian Americans have finally found traction. Hong is a magnificent writer and holds nothing back. For some, this will be deeply affirming, for others an eye-opening look at the world through the lens of one of the most capable observers of self and society writing today. —E.M.

The Disordered Cosmos: A Journey Into Dark Matter, Spacetime, and Dreams Deferred by Chanda Prescod-Weinstein

Prescod-Weinstein is a rocket scientist for a modern age, conducting research into cosmology, particle physics, Black feminist science, and, well, pretty much everything interesting. She is also one of the only Black theoretical physicists in the world. Why? Prescod-Weinstein deftly shares concepts about the known universe with searing insights into why and how long-standing traditions in science have oppressed certain people and, as a result, our understanding of the cosmos. This is nothing short of a star map to a better world. —E.M.

The Lost Art of Connecting: The Gather, Ask, Do, Method For Building Meaningful Business Relationships by Susan McPherson

Don’t let the perfect timing of this book fool you. Yes, McPherson will hold your hand as you reenter the world with an eye to building yourself and your network back better. But the truth is that few of us had the kind of rich, authentic, and purposeful relationships we might have once imagined before quarantine took hold. In this delightful book, McPherson explains not just how to infuse your interactions with trust and purpose, but why it matters, now more than ever. —E.M.

In a troubled age, when the past is increasingly called into question, we are all history buffs now. To that end, this remarkable book fills an enormous gap in our collective understanding of the past, a page-turner that will break your heart. Willis, professor and chair of the Department of Photography and Imaging at Tisch School of the Arts, centers extraordinary and largely unknown images of Black Civil War soldiers within a reported narrative that highlights the enormous hardships they faced and the contributions they made. She makes history feel like a family album. —E.M.