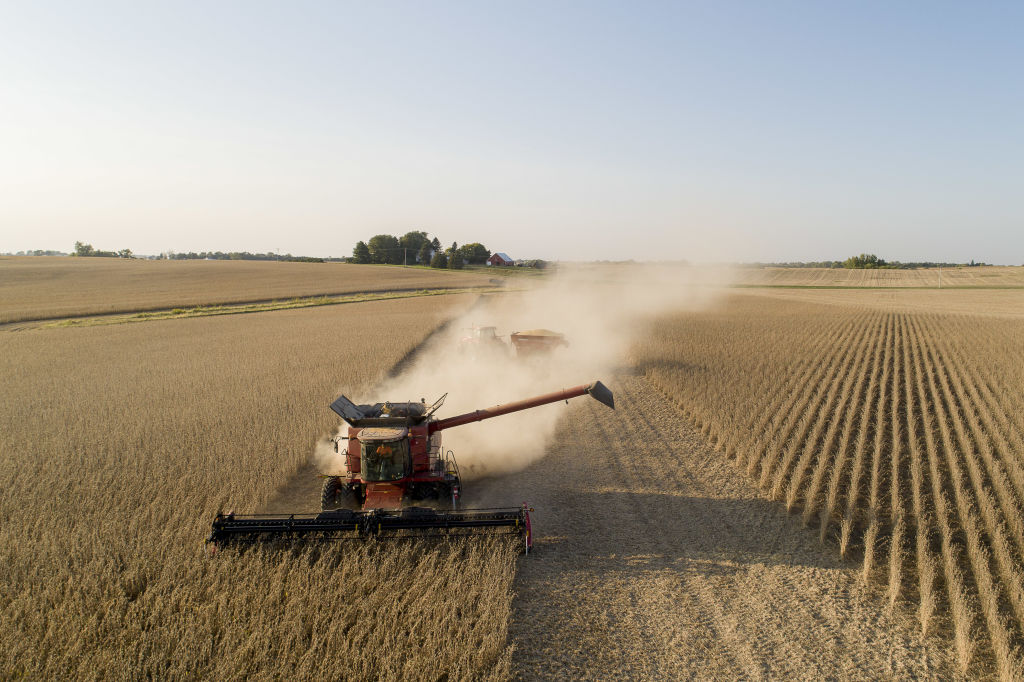 One of the most frequent criticisms of Donald Trump’s trade war with China was that American farmers would get caught in the crossfire.

A chorus of economists and industry experts warned that if Trump were to impose tariffs on Chinese products in his effort to eliminate the trade deficit and bring manufacturing jobs back home, the world’s most populous nation would retaliate by slapping reciprocal duties on American farmers.

Soybean, dairy, and pig farmers are among America’s biggest exporters. But they also were (and remain) a critical part of Trump’s political base. Farmers were often described as Trump’s “weak spot” in his face-off with China.

Even if Trump eventually succeeded in closing a trade deal, skeptics cautioned, the danger was that while the two sides haggled, China might permanently shift agricultural purchases to other countries such as Brazil.

That’s not exactly how the confrontation has played out.

True, China responded to Trump’s tariffs as predicted, placing steep tariffs on nearly all U.S. agricultural products, and sending U.S. exports of soybeans and feed grains into a tailspin. And, as we’ve noted often in this space, Beijing remains far short of the promise it made in a January 2020 trade agreement to buy at least $200 billion more in U.S. goods and services in 2020 and 2021.

But China’s purchases of U.S. agricultural products are now within hailing distance of the trade truce’s targets. U.S. farm exports to China in 2020 were 82% of levels envisioned in the trade deal, according an estimate by the Peterson Institute of International Economics.

And this year American farmers—who were shielded from the impact of China’s tariffs by billions in federal subsidies—are emerging from the fracas in rude health and looking forward to one of their best years ever. On May 26, the U.S. Department of Agriculture forecast U.S. farm exports for the fiscal year ending in September will reach $164 billion—a 21% increase over last year and the highest total on record.

The key driver of that surge: China, to which the USDA expects U.S. farm exports to rise to $35 billion, a record high. The agency predicts that this year China will return to its pre-trade war status as the largest buyer of U.S. farm goods, swallowing 23% of total U.S. agricultural exports of $164 billion.

“For U.S. Farmers, China is Back and Bigger Than Ever,” blared a March headline in the Wall Street Journal. As the Financial Times noted this week: “China is now at the heart of a reversal in [U.S.] farmers’ fortunes.”

Several factors have aligned to rekindle China’s voracious appetite for U.S. farm goods. The Chinese economy bounced back quickly from the coronavirus pandemic. Chinese pig farmers have mostly contained a deadly outbreak of swine flu and are trying to regrow their herds, boosting demand for soybeans, which are crushed to make pig feed. Meanwhile, Brazil’s soybean farmers are battling the country’s worst drought in nine decades.

This reversal of fortune—with China suddenly dependent on U.S. farmers rather than seeing them as a source of political leverage—doesn’t necessarily prove Trump’s assertion that “Trade wars are good, and easy to win.” But at the very least it proves that trade wars are unpredictable and shows how quickly the tables can turn.

China’s distaste for cryptocurrencies like Bitcoin does not extend to the technology that undergird them. In a document released Monday by the Ministry of Industry and Information Technology (MIIT), China outlined plans to become a global leader in blockchain technology, a decentralized digital ledger of transactions and other records. China said it plans to invest in research centers and private firms that can be deployed to improve systems like supply chain management, product traceability, property registration, and health care data management. South China Morning Post

Myanmar’s military junta charged former President Aung San Suu Kyii and other officials with corruption on Thursday, alleging that Suu Kyii illegally accepted $600,000 and gold from a top-level official in her administration. Suu Kyii could face up to 15 years in prison if she is found guilty. The military overthrew Suu Kyii’s administration in a February coup, and the regime has since killed over 800 protesters and civilians in a brutal crackdown across the country. Bloomberg

On Wednesday, the Wall Street Journal reports that China’s plans to drive more economic growth will take precedent over its plans to reduce carbon emissions. The decision comes as China’s top economic planners have argued that proposed reforms from China’s environmental ministry could stunt economic growth. China is set to launch a new carbon-trading scheme later this month, but people familiar with the matter say that officials severely weakened the power and scope of the scheme. Wall Street Journal

After a year of living relatively free of COVID-19 infections, Thailand is averaging over 20,000 new infections per week and its sluggish vaccine campaign is struggling to keep up. As of Thursday, Thailand has fully vaccinated less than 2% of its population, less than neighbors like Cambodia and Laos. The lag is delaying plans for Thailand to reopen its valuable tourism business, and sparking questions about King Maha Vajiralongkorn’s role in the drive. Thailand planned to vaccinate most of its population using AstraZeneca doses made by Siam Bioscience, a small biotech firm owned by the king. Siam Bioscience had never produced vaccines before, and only began distributing doses this week after months of delays. Financial Times

The U.S., Australia, and Japan are reviving the ‘Blue Dot Network,’ a global infrastructure and spending initiative aimed at challenging China’s global Belt and Road Initiative (BRI). The Blue Dot Network is unlikely to match China’s spending on the BRI, but the network will create certification standards to ensure that infrastructure projects are transparent and sustainable. Officials say that these standards will help galvanize private investment and spending on infrastructure projects abroad. Nikkei Asian Review

Three Gorges Dam Renewable Group – Shares of the renewable energy firm surged by 44% after it debuted on the Shanghai stock exchange on Thursday. The firm is an arm of the state-owned group China Three Gorges Corp, which owns the prominent Yangtze River dam. Financial Times

Crypto blackout – Chinese users are facing a blackout on searches for popular cryptocurrency exchanges like Binance, OKEx, and Huobi. China’s government has recently cracked down on crypto mining and trading operations in the country over concerns about crypto's growing size and popularity in China. Bloomberg

Australia wine – Prime Minister Scott Morrison said Australia will ask the World Trade Organization to resolve a dispute that has left barley producers and wine growers in Australia facing tariffs of up to 200% that China has imposed on Australian imports. Bloomberg

Grab – Southeast Asian ride-hailing giant Grab is pushing its SPAC merger and planned $40 billion IPO from July to the fourth quarter of this year, the firm said this week. Grab says the delay is necessary because U.S. regulators are still finalizing a financial audit. Deal Street Asia

Tokyo 2020 – Corporate sponsors of the upcoming Tokyo Olympics are reaching out to marketing firms to examine whether associating themselves with the Games could damage their reputations, and at least some are considering dropping ad campaigns related to the Olympics. Japan intends to host the games even though 62% of the Japanese public wants the event canceled due to COVID-19 concerns. Financial Times

Li Ning – India is dropping Chinese sportswear brand Li Ning as its official uniform sponsor for the upcoming Olympic Games in Tokyo. India's athletes will wear unbranded apparel instead. The move comes as ties between Beijing and New Delhi have worsened in the last year after a border dispute resulted in dozens of deaths last summer. Nikkei Asian Review

China’s producer price index, a measure of production costs, rose 9% in May, the largest year-on-year increase since September 2008. The jump in production costs is stoking fears about inflation, as rising prices for raw materials and commodities coming from China could lead to higher costs for consumers in the U.S. and other countries. Port delays in southern China due to recent COVID-19 lockdowns are only adding to the concerns. CNBC