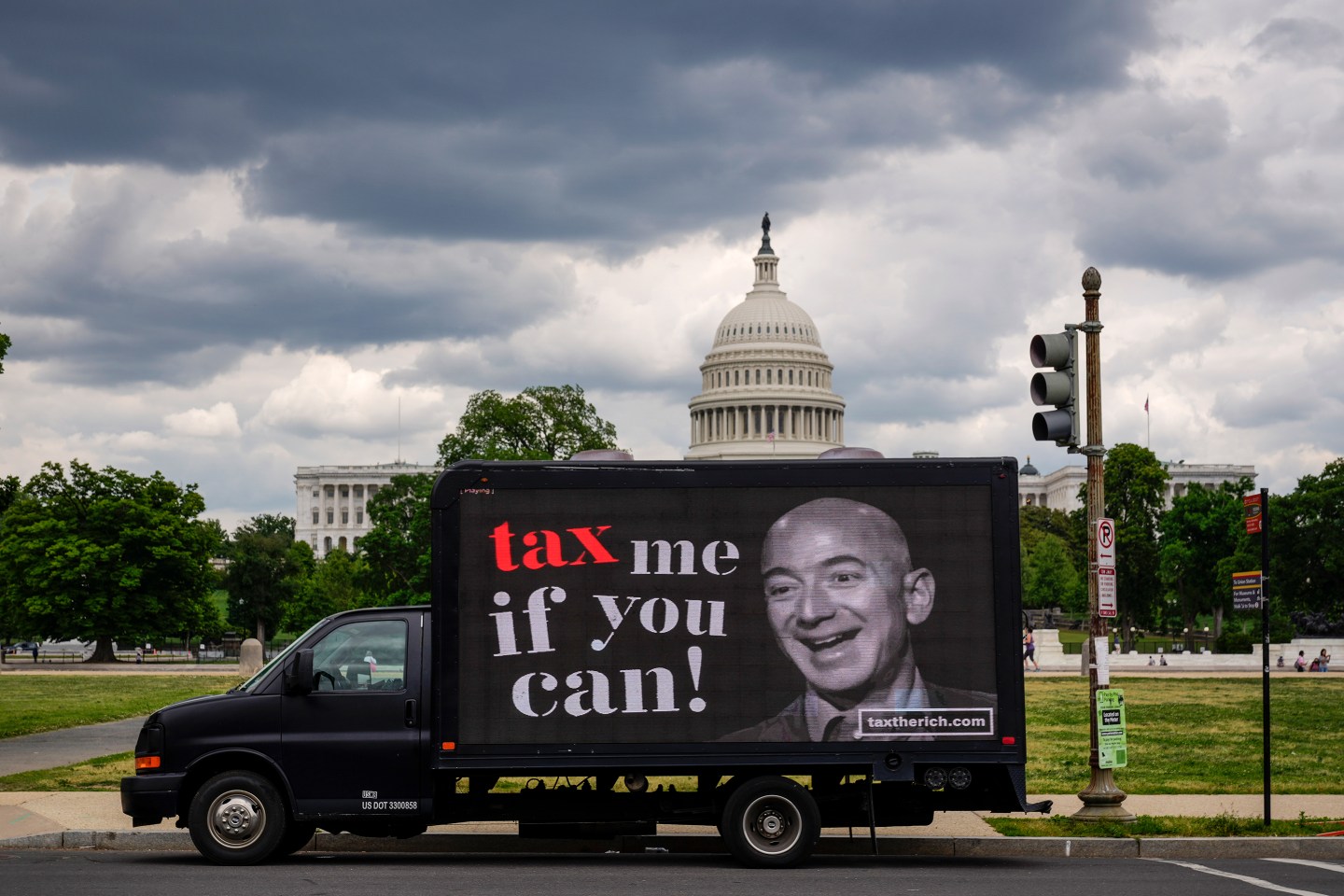 A mobile billboard calling for higher taxes on the ultrawealthy, with an image of Amazon CEO Jeff Bezos, near the U.S. Capitol on May 17, 2021.
Drew Angerer—Getty Images

It is no surprise that billionaires pay little in federal taxes relative to their incomes, but the level of detail provided by ProPublica Tuesday about how 25 billionaires pulled this off is astonishing. It is also an argument for one of President Joe Biden’s key tax proposals—taxing so-called unrealized capital gains that millionaires and billionaires have long avoided paying taxes on when they die.

For example, if someone’s net worth was $4 million last year and is $5 million this year, an economist would say that person must have had income of at least $1 million. But if that person’s net worth grew only because their assets appreciated, tax rules do not count that $1 million as income.

Tax rules count capital gains as income only if and when the owner of an asset sells it, at which point the appreciation is calculated as the profit from the asset sale, also called a “realized” capital gain. Billionaires like Warren Buffett, Jeff Bezos, Michael Bloomberg, and Elon Musk can avoid paying income tax by simply holding on to their assets.

This arcane point is hugely consequential. For example, the ProPublica article reveals that Bezos reported $4.2 billion in income to the IRS during the five-year period examined, a substantial sum by most measures. But Bezos’s assets appreciated by $99 billion during that period. So, an economist would say that Bezos had income of more than $100 billion over five years, but he paid federal taxes only on $4.2 billion. Federal taxes as a share of his true total income over that period come to less than 1%.

Tax experts have long known that rich people are able to avoid taxes in this way, but they do not always agree on how to address it. Most people get their income from work, and this earned income is taxed each year. The ability of the wealthy to avoid paying taxes on most of their income each year allows them to grow their income at a much more rapid rate.

For example, in 2015 David S. Miller explained that Buffett, whose net worth was nearly $70 billion at that time, would have been worth $9.5 billion if his capital gains had been taxed each year regardless of whether he sold assets.

Miller points out that the best way to address this is to change the rules to include unrealized capital gains as income for tax purposes each year, an approach called mark-to-market taxation. The chairman of the Senate Finance Committee, Sen. Ron Wyden, agrees, and issued a white paper in 2019 calling for this reform.

The tax code provides another even more problematic tax break for unrealized capital gains by exempting them forever when individuals die. This is the so-called stepped-up basis. The appreciation of assets held by wealthy people is never subject to income taxes if those assets are held until the holders die and are left to their heirs.

To calculate a capital gain after selling an asset, the basis, which is usually the price the taxpayer paid to purchase the asset, is subtracted from the sale price he or she received for the asset. For heirs, the basis is “stepped up” to the asset’s value on the day they inherited it. The unrealized capital gains that accumulated before the asset was passed to them simply disappear as far as the tax code is concerned.

To ensure that the wealthy eventually pay income taxes on all their income, Congress must at the very least repeal the stepped-up basis rule and tax unrealized gains of wealthy individuals when they die.

Biden has included this reform as one of the revenue-raising provisions in his American Families Plan. He would tax unrealized capital gains exceeding $1 million ($2 million for married couples) at death. Additional exclusions for gains on a home also would apply.

Opposition to the proposal is not about farms and small businesses; it is about ensuring that people like Buffett, Bezos, Bloomberg, and Musk never have to pay taxes on all their income the way that middle-class families do. Congress must enact Biden’s proposed reform, at a minimum, or else nothing revealed by the ProPublica exposé will change in any significant way.

Steve Wamhoff is the director of federal tax policy at the Institute on Taxation and Economic Policy.