Uncategorized ·How to Reopen

Breathing life back into Scotland’s rural villages and countryside 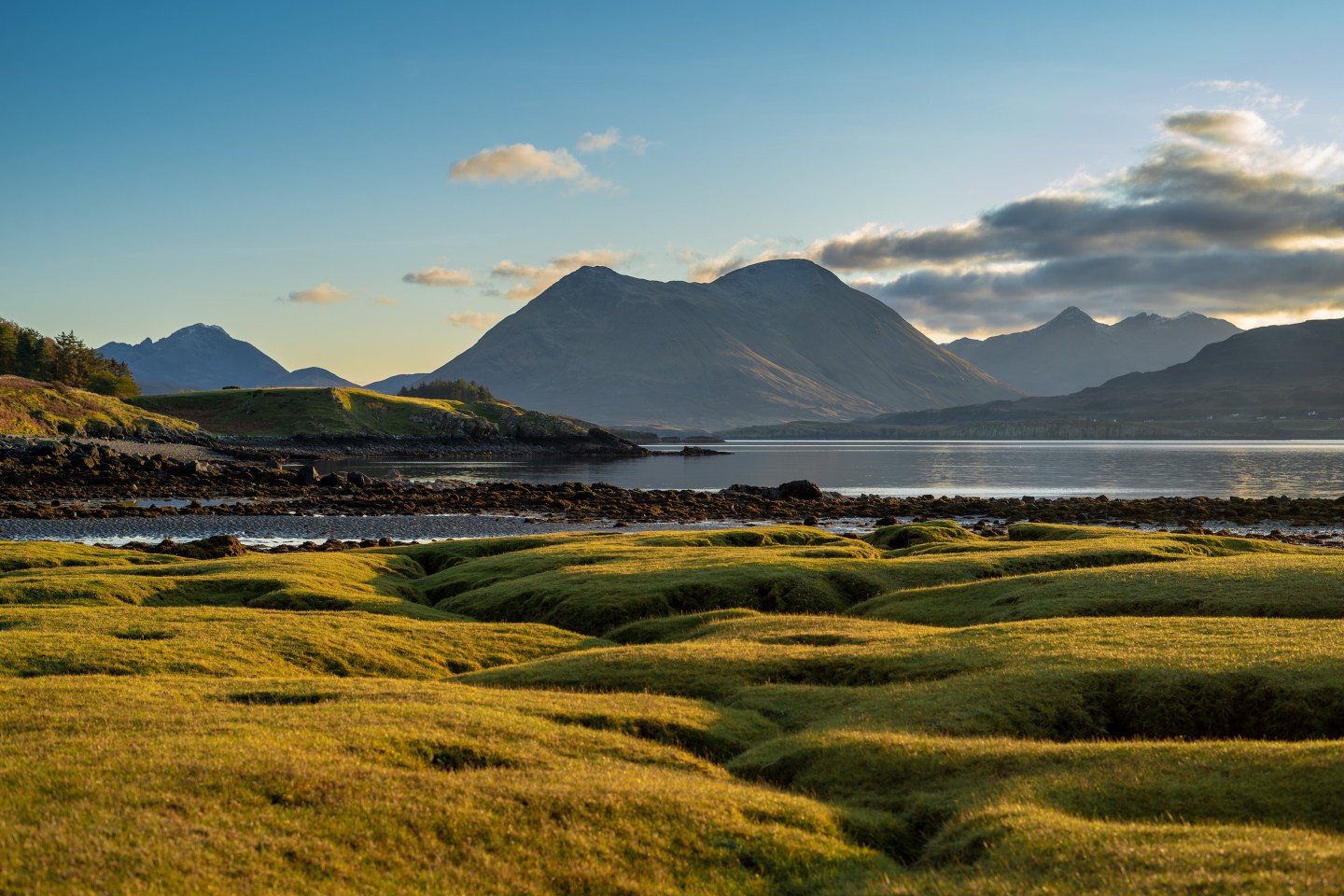 Glamaig on the Isle of Skye during sunset, viewed from the shoreline.
Courtesy of Raasay Distillery

Scotland feeds the feeling of home away from home. A visit there is what you expect but weren’t actually expecting. Those single-lane dirt tracks and ancient bridges lead to surprises. At any given moment, a herd of deer might cross the road in haste, or Highland cattle may decide to take naps in the middle of it. Either way, you’re in awe. In quieter areas, locals stock honesty boxes with homemade cakes and hot teas for passersby in need of a break. These treasures are everywhere.

As COVID-19 took a swing at the country, the pandemic hit rural regions and small businesses especially hard. Repeated lockdowns were muddled by contradictory information between the local Scottish and greater U.K. governments, leaving the hospitality industry defeated. Travel from England and Wales that supports a lot of hyper-local tourist economies ceased. Combined with a complete absence of international travel, the strain overwhelmed.

As life reemerges, future visitors seek more than an itinerary-packed vacation. They’re looking for a breath of fresh, peaty air, and liberating treasures away from home.

In Scotland, and many other countries that see waves of tourists annually, the future is about revitalizing the visitor and locals.

When planning bespoke trips for clients, travel company Away From the Ordinary collaborates with small businesses—drivers, restaurants, local tour guides, bed-and-breakfasts, for instance—to create tailored experiences. Whether that is tracing the footsteps of ancestral lineage or finding a personal connection that inevitably feels as if family heritage preceded it. In 2020, founder and Scotland native Aeneas O’Hara booked zero trips. Instead, virtual whisky and gin tastings re-created evenings at a cheerful pub. Looking ahead, O’Hara is leading clients to discover smaller, more vulnerable communities reliant on much-needed tourism income.

According to a report by VisitScotland, an estimated 17 million people, both domestically and internationally, visited the country in 2019. Fortunately, for a lot of people in the hospitality industry, the Scottish government subsidized 80% of wages for individuals furloughed owing to the pandemic. This helped many businesses retain their staff. Still, the loss of vital revenue streams left properties shuttered or on the brink. Faraway areas in the wilder Scottish Highlands, like Ardnamurchan or Alladale Wilderness Reserve, along with lesser-known islands saw an almost full stop to their tourist seasons.

“Some of those [businesses] aren’t back or aren’t coming back online certainly this year and maybe not ever,” says O’Hara who witnessed some of his beloved partners close permanently. As restrictions begin to lift, many of his clients are leaning toward slower, remote travel that for him means endorsing places off the tourist map. “[Travelers] are wanting to recoup, breathe nature again, take things in, and relax,” he notes. “It’s making us more cognizant of the positive influence that we can wield by pulling people in the right direction.”

The western Isle of Raasay—a Manhattan-size jewel box of geographical gems—is tucked between the popular Isle of Skye and Scotland’s mainland. It’s an outdoor playground of hiking and biking trails, archery, and seafaring pursuits. A 40-minute drive from its southern to northern tips exposes flexing mountain ridges that part ways for lakes or dramatic views of neighboring lands. On a clear day, the island glimmers. On a cloudy one, it’s mystifying and mythical.

With a population of around 160 (the number fluctuates sporadically), a primary school with five pupils, and a community-owned grocer that shares its space with the post office, a destination like this is eager for outside company to reappear. Carol Anderson, the marketing manager at Raasay House—a 21-room hotel owned by the Community Trust and shepherded by a Brittany spaniel named Bonnie—has lived on the island since 2010. To her, the pandemic resembled the hush of winter, but with sunshine.

Only about 500 yards away is Raasay Distillery and accompanying Whisky Hotel. During its 2018 and 2019 seasons, the distillery tours, visitors center, and accommodations were continuously full of life. Cofounder Alasdair Day says that since March 2020 all were shut down completely. According to Day, 11% of 2019 revenue came from wholesale and trade within the U.K. (liquor stores, bars, and restaurants); 22% from accommodations; and 17% from the distillery shop and tours. The burden was relieved from online bottle and cask sales and virtual tastings.

On March 26 of this year, the country lifted its winter lockdown, allowing businesses to welcome domestic visitors once again. Waiting out another potential bait and switch, both the distillery and Raasay House plan to reopen in the middle of May. “It’s just so difficult to try and work out what’s going to happen. What business can you count on? What business do you definitely know you’re not going to count on?” Anderson says while wavering between optimism and caution. “But thanks to the government scheme, we didn’t have to let anyone go. It’s just not knowing what’s going to happen that takes its toll on people. I think everyone around the world is the same.”

Places like this are often hiding in plain sight, including Scotland’s western peninsulas. Ardnamurchan (Gaelic for “headland of the great seas”), for instance, is a question mark on Google Maps. Many don’t venture further than Glenfinnan, a historic stomping ground and home of the Glenfinnan Viaduct made famous by Harry Potter. Once they do, the winding single-track from western Salen to Ardnamurchan Lighthouse hugs the shore of Loch Sunart and snakes under ancient oak trees to villages that hold strength together.

A view of the hills and mountains of Skye.
Courtesy of Raasay Distillery

“There isn’t the bucket list castle, restaurant, golf course, or distillery; and that in itself is its appeal—its saving grace even,” O’Hara says in a Robert Burns–style email he titled “Ode to Ardnamurchan.” “Its small uninhabited forested islands standing like sentinels, the rolling hills, the ever-changing light, and deserted white sandy beaches are its delight.”

Along that journey is Ardnamurchan Distillery which, like Raasay Distillery, closed for a year leaving its revenue in the hands of online sales and tastings. Plans for reopening are still in the works. Further, there’s obscure charm gifted by community and nature: the Singing Sands at Ardtoe or coastal foraging; wild walks and wildlife; and female-owned Nc’nean Distillery whose spirits are “made by nature, not by rules.” A disposition seen throughout the country.

While many want to escape isolation at home, the allure of isolation elsewhere is top of mind. An hour north of Inverness is Alladale Wilderness Reserve, quite literally at the end of that road. The sprawling 23,000-acre property has a capacity of just 40 guests spread among four lodges. In 2020, Alladale remained closed. Comparatively, it typically averages 90% occupancy each year.

Among numerous ongoing sustainable and regenerative projects—planting 1 million native trees, restoring damaged peatlands (one of the most viable carbon sinks in the world), revitalizing the red squirrel population, and rewilding deer—the Alladale proprietors used the closure to build an aquaponic vegetable garden to supply menus with the vegetation and herbs required to feed guests.

The seclusion of the reserve brings its core mission to life: Be as self-reliant as possible. This includes offering groups and families a place to reconnect with nature and disconnect from everyday life; only broadband is offered here. As they reopen, a one-week minimum is required opposed to its past three-to-four night stays, positioning itself a destination, not just a hotel.

“At the end of the day, it’s called the service industry. And we work in a service industry because we enjoy providing a service to our guests. When that falls away, it leaves a big hole in everything,” says general manager Pieter-Paul Groenhuijsen. “Now we’re all really looking forward to welcoming guests again. It’s such a joy to hear laughter of kids down the valleys and playing in the rivers. We really look forward to welcoming that again, and hopefully as a business and as a team, we come out of this stronger.”

In history, Scotland has endured many battles. But much like its national emblem, the thistle, it is safeguarded by its own defense mechanism. “Part of the Scottish psyche is to try to find humor and find a laugh, trying to make somebody smile, try and make somebody laugh. And that’s our culture,” says O’Hara. The purple bloom is that small-town grocer, who also happens to be the bartender and mailman, sharing a dram of whisky with an explorer. And just like that, the question mark on the map, that prolonged uncertainty, is transformed into an exclamation point.