Will Bidenomics transform America’s economy? Not so fast 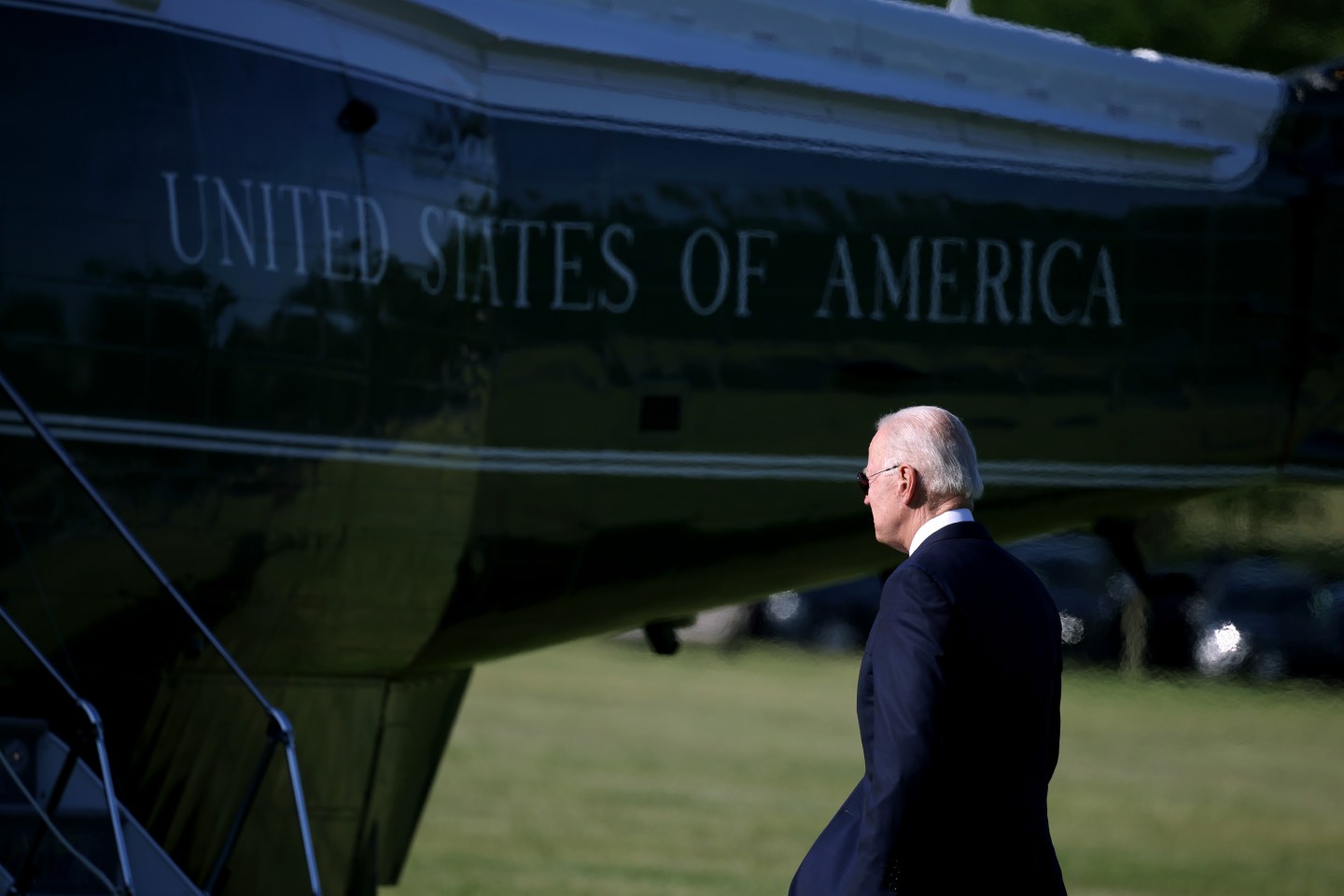 President Biden boarding Marine One on May 19, 2021. "There is no doubt that President Biden’s policy agenda is ambitious and large, but the bar for transformation is high," the authors write.
Anna Moneymaker—Getty Images

The Biden administration’s economic policy agenda drives either hope or despair, depending on where commentators fall on the political spectrum. In one aspect the reactions are curiously bipartisan, however—namely the claim that Bidenomics is “transformative,” a wholesale rewiring of the U.S. economy.

While searching for historic inflection points is popular at times of upheaval, the current sentiment of change is particularly strong, with commentators readily reaching for comparisons with Franklin D. Roosevelt and the 1930s transformation of the U.S. economy, government, and society.

The reality is considerably more mundane, and narratives of historic inflection are overstated. There is no doubt that President Biden’s policy agenda is ambitious and large, but the bar for transformation is high—and if we invoke historic dimensions then we should do so against the benchmark of, well, history. The narrative of transformation struggles along three dimensions: spending size and type; the use of stimulus to push the cycle; and the political capital required to sustain change.

Let’s look at each in turn.

Consider government spending. It spiked enormously during the COVID-19 crisis, and Biden is now looking to carry that tailwind into the latter stages of the recovery.

The real question is the permanence of this spending pattern, not the spike itself, which was critical in preventing structural economic scarring that can come with large shocks. Modern history offers four benchmarks for the normalization of such fiscal spikes: World War I, the Great Depression and New Deal, World War II, and the Global Financial Crisis. While each saw a surge in spending, in two cases spending levels quickly returned close to pre-crisis levels (WWI and GFC). The New Deal and WWII, meanwhile, are instances where spending settled at significantly higher levels even as the crises receded.

The COVID response with the Bidenomics coda looks a lot more like WWI or GFC than the New Deal or WWII in terms of fiscal response. If we add up all the pieces of stimulus on a timeline (from the various components of the COVID stimulus, the planned infrastructure bill and the social spending plans) this spending will taper rapidly over the next few years. There is nothing in Biden’s proposals that hardwires permanently higher spending.

Contrast that with the New Deal and WWII. A pre-1930 American adult may have had little contact with, and expected relatively little from, the federal government. The New Deal changed all that: Examples include Social Security and the establishment of the Federal Deposit Insurance Corp. (FDIC), programs now considered irreplaceable, which demonstrate how the role of government changed. Meanwhile, WWII transformed the U.S. into the global hegemon, necessitating a more expansive state reflected in permanently higher spending. That’s how high the bar of history is set. There is no doubt that Biden is pushing hard to prolong the fiscal tailwind that comes from crisis fighting, but so far, we detect little in the agenda that hardwires a structural step change in spending.

The claims of discontinuity are more convincing where they address the type of spending. For example, much has been made of the inclusion in the March 2021 U.S. stimulus package of an expanded child tax credit, a policy staple of other rich nations that has proved elusive in the U.S.. But the Biden administration passed this as a one-off, without permanence as a budget item.

The suggested $1.8 trillion of social spend included in Biden’s proposed American Families Plan has evidence of a shift in emphasis: it proposes to establish universal pre-kindergarten, family leave, and other social programs.

But it’s easily forgotten that social spending has been drifting higher for decades in the U.S. and a further updrift would not be a discontinuity but a continuity. And even if all Biden’s ambitions are achieved the U.S. would remain amongst the bottom rung of the G-10 when it comes to social spending. Fear it or love it, a Nordic America is not in the proposals.

All this adds up to an aggressive effort to push cyclical growth—essentially, a bet that delivering a post-Covid economy with very strong labor markets will have political as well as economic benefits. That’s hardly revolutionary thinking—the political desire to push the cycle has been the norm across political administrations for decades. Both parties have consistently pushed the cycle if and when they had license to do so. That license often came from markets (full control of Washington is the other enabler).

Prior to the re-anchoring of inflation in the 1980s, debt markets were less tolerant of deficits. Jimmy Carter’s budget was rejected by markets in 1979, sending rates soaring and further damaging his reelection prospects. All that fed into a notion that “bond vigilantes” would provide a check on government profligacy. But with inflation structurally anchored those vigilantes have cared much less, giving rise to political notions that  “deficits don’t matter” (Dick Cheney), whereas older administrations still lived in fear that bond markets “intimidate everybody” (James Carville).

Beyond deficits, both parties have presided over persistent asset bubbles that we have become used to, and dependent on, to juice the cycle. Much of the cyclical dynamics of the last 30 years can be ascribed to debt growth and three consecutive asset bubbles (dotcom, housing, very low long-term interest rates). While the soundness of this growth model is an important debate, the claim that Bidenomics represents an inflection, rather than a continuation of the same, is difficult to see in the benchmark of history.

Economic and societal transformations ultimately depend on political capital, not just vision or political will. Even if Biden wanted to engineer a historic inflection point, he knows that his political capital is lacking. That stands in stark contrast to FDR, whose transformative administration was rooted in enormous majorities in both Senate and House, while Biden operates on razor thin margins.

To push through a transformative policy agenda an administration needs to accumulate sufficient political capital—sustaining electoral success over several cycles to build the required majorities. In Biden’s case net gains in the Senate (and House) in 2022 and again in 2024 would allow for a potentially transformative second term. On current predictions, that will be an enormous challenge, but that is the point: It’s easy to forget that the U.S. political system is designed to discourage abrupt swings in direction, instead requiring sustained voter approval to bring about deep change.

If the current raft of policy proposals doesn’t add up to a historic transformation, what would justify Democrats’ hope and Republicans’ fear?

What’s absent from Biden’s agenda are the kind of step changes that would withstand comparison with history. On the spending side, a UBI (Universal Basic Income) would be a discontinuity—a gigantic step change in the size and type of spending, as well as changing the way the responsibility of government is perceived. On the funding side, a transformation would be an explicit embrace of heterodox policy proposals, often summarized in “modern monetary theory” (MMT), or, less dramatically a federal sales tax.

All of these themes are alive today in the progressive wing of the Democratic party. But Andrew Yang who pushed for UBI never polled in the double digits in the 2020 Democratic primary; Bernie Sanders, who has embraced Stephanie Kelton, an MMT cheerleader, was unable to win the Democratic nomination. The political foundations for transformation are not there.

While transformations can occur, the bar of history is high – change is more often incremental, and that is what we are seeing today.