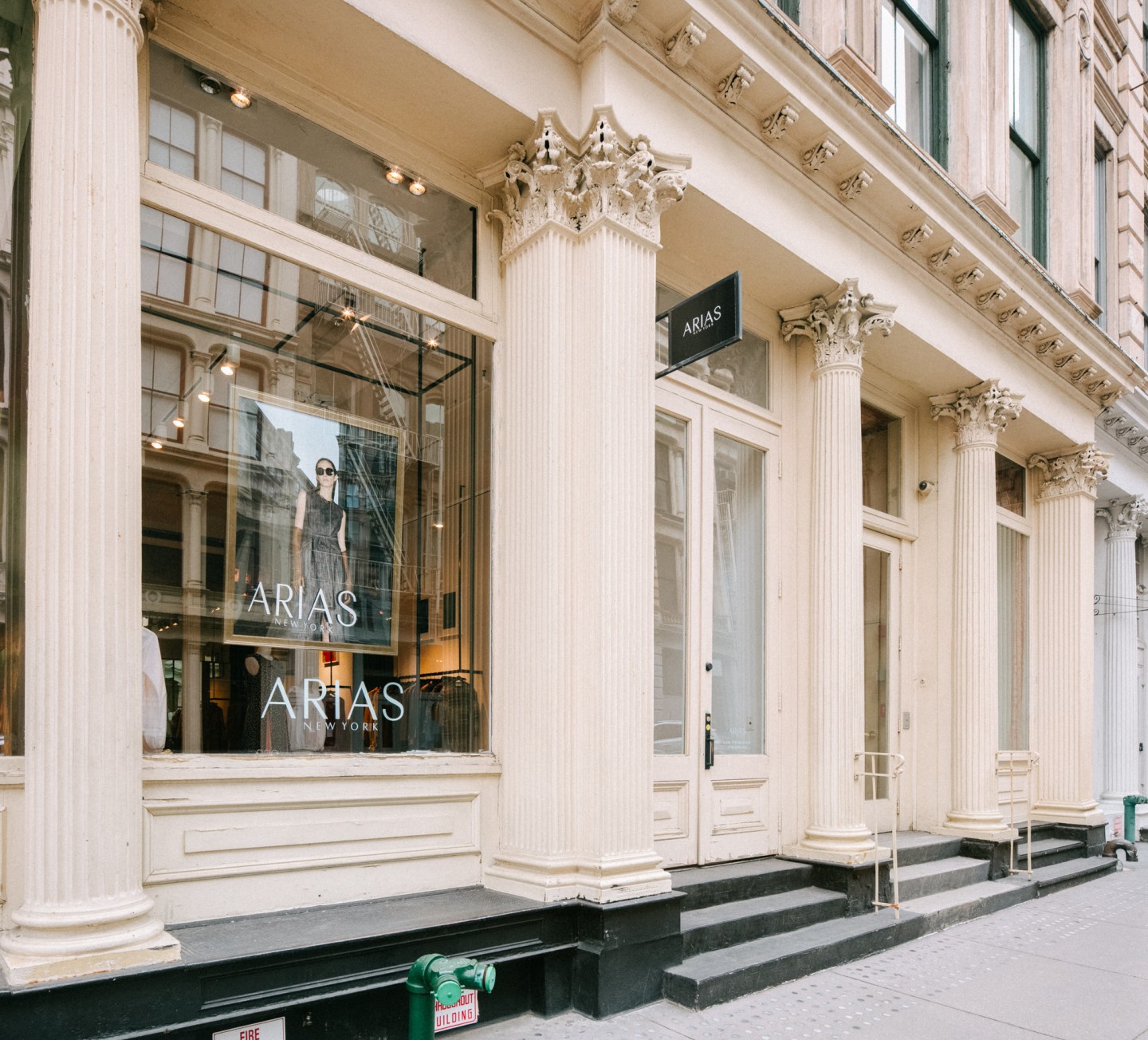 For a year, fashion designer Nina Sarin Arias, who founded the label Arias New York, searched for the most gallery-like space in Manhattan’s SoHo neighborhood for a brick-and-mortar shop for her brand. She set an opening date for the Broome Street store in March 2020. The only task left on the list: add the clothes.

It would be another five months before those clothes would ever hang on the garment racks, thanks to the outbreak of COVID-19.

Sarin Arias launched her namesake brand four years ago out of the living room of her apartment. After business school in London, a degree from Parsons School of Design in New York, and corporate stints at Cartier and Burberry, Sarin Arias felt prepared to run her own company and design her own line of women’s wear. She specializes in day-to-night looks for women with busy lifestyles. It’s a very urban idea that naturally fits a brand rooted in downtown New York City. All design and production are done in New York, and she sources many of her fabrics from there too.

Nina Sarin Arias is an emerging fashion designer with her label, Arias. She opened her first brick-and-mortar store in Manhattan’s SoHo district in August 2020.
Courtesy of Arias New York

As chief executive officer and creative director, she has strategically grown Arias with thoughtful partnerships at retailers like Net-a-Porter and Moda Operandi as well as her own e-commerce site. But by 2019, she knew it was the right time—even in today’s retail landscape—to launch a brick-and-mortar store. Her loyal customers have asked for a place to engage with the clothes beyond trunk shows, and brick-and-mortar concepts have long been a method of customer acquisition.

Sarin Arias also desired a space that could serve as part retail store, part art gallery. She is directly inspired by contemporary art when she sits down to sketch. A collector herself, contemporary art has remained a thread from season to season in her designs, and she would pay tribute to that connection with the brick-and-mortar space. It would serve as both an experience for customers and a reason to come back each season: to see the new clothes and the next art exhibition.

“The intersection of art and fashion is such a part of the brand DNA, and something that I wanted to manifest in my space,” Sarin Arias says of landing on a Broome Street slot in SoHo. “This had a chic aesthetic already built in. I knew I could add to it.”

You can feel the contemporary art vibes when you walk in: high ceilings, bright light from the massive street-facing window, and industrial touches like two slim columns in the middle of the room. Patterned and colorful dresses, ruffled tops, and puff-sleeve blazers line the walls, and a pair of antique chairs invite you to sit for styling chats. Above the clothes hang the works of James Welling, a well-known photographer who actually lives nearby. (On view through June 30, 2021.)

For Sarin Arias, Welling was the ideal collaboration artist, a fellow SoHo-ite whose bold and dynamic work complemented her spring 2021 collection. They both really wanted the crowds to return to the neighborhood, stimulate the economy, and appreciate beautiful creations.

Sarin Arias says it has been luck combined with her company’s nimble mentality that helped her team make it though with a store still standing. When the March 2020 lockdown shut the doors to stores across the city, Sarin Arias was just days from officially opening. She negotiated her lease with her landlord for an August 2020 opening instead. Her team began working from home, and all production stopped. They took it all day by day, so there was little time to even process the emotions.

The Arias collection has a particular focus on minimal yet feminine clothes.
Courtesy of Arias New York

Taking a levelheaded approach, Sarin Arias focused on e-commerce sales. When manufacturing got the green light to reopen in New York, she opted to produce personal protective equipment to help with supply issues at medical facilities. She used remnant fabrics from previous seasons to sew upcycled masks. While she has donated most of what they produced, she does still sell silk masks on her website and at the store.

She canceled all her wholesale orders for the fall, a difficult decision, she says. But she ran the numbers, and it didn’t make sense, not when they were carrying the cost of employees, materials, production, and her brick-and-mortar venue on the horizon. She’d rather save the cash. “This is a long-term plan for me,” Sarin Arias says. “I understand the investment. I scale up and scale down as needed, and that’s really why I was able to make it through.”

In the summer, gossip bubbled that nonessential retail stores would soon reopen, so Sarin Arias checked in with neighboring shops like Paige and Golden Goose. It seemed that everyone on her surrounding few blocks was slated for August reopening, once granted permission by the state. Sarin Arias decided to join them and open in two weeks. The team cleaned the store, dropped in the clothes, set up COVID-related protocols, and hung a “We Are Open” sign on the door.

The day the store debuted, Sarin Arias says she just felt relief. When she went home that evening, she didn’t really celebrate with her husband; exhaustion had set in. But it was still a momentous occasion for her brand. Maybe she didn’t get the fanfare of pre-pandemic times with a splashy party and Champagne, but she now had a store in one of the hottest retail destinations in the country. That was an accomplishment in and of itself. (A cocktail party will occur, she says, when it’s safe to do so.)

Sarin Arias works from an office in the store, where she is designing future collections but also managing her own public relations, digital marketing, and even some styling appointments. She and her team sanitize all clothes after use in the fitting room, constantly clean the space, cap the number of customers inside, and offer everyone, including messengers, hand sanitizer. One fun addition, she says, are splits of sparkling wine they hand to clients instead of the traditional glass.

The world looked up for a few months of business on Broome Street, and creativity melded with resourcefulness. When Sarin Arias’s landlord mandated that they board up the windows during the U.S. presidential election in November 2020, for fear of riots, she didn’t let the time go to waste. She realized she could utilize her space in a different way. With the windows covered, it blocked the sunlight, making the interior look very much like a photo studio. She set up a backdrop, hired a model and a photographer, and used those three days to shoot product shots for the website.

But as the cooler weather set in and holiday-related coronavirus numbers surged in New York, she took a hard look at the store. Many of her regular customers had decamped from the city, for country homes or warmer weather. Hardly anyone walked the streets, even for holiday shopping.

“I chose to close the store for appointments only in January and February,” Sarin Arias says. Some of her customers and wholesale meetings opted for videoconferencing, but she still had several in-person appointments on the books. In March of 2021, she reopened to walk-ins too, and the “We Are Open” sign went back on the door. “We can keep that sign up,” she adds. “We met a lot of great people in the neighborhood that way.”

Since the August 2020 opening, sales are down 25% from projections for the store, but Sarin Arias notes they haven’t yet reached the finish line. She hopes to regain those sales when the economy as a whole regains its strength in the coming months. For the broader company, her e-commerce revenue has more than made up for any lack of sales at the brick-and-mortar space.

“The store is a risk but a calculated risk,” she says. “I was just realistic about this time. I watched the news. I read the business publications. I followed the stock market. I would never be jumping in more than I think I could.”