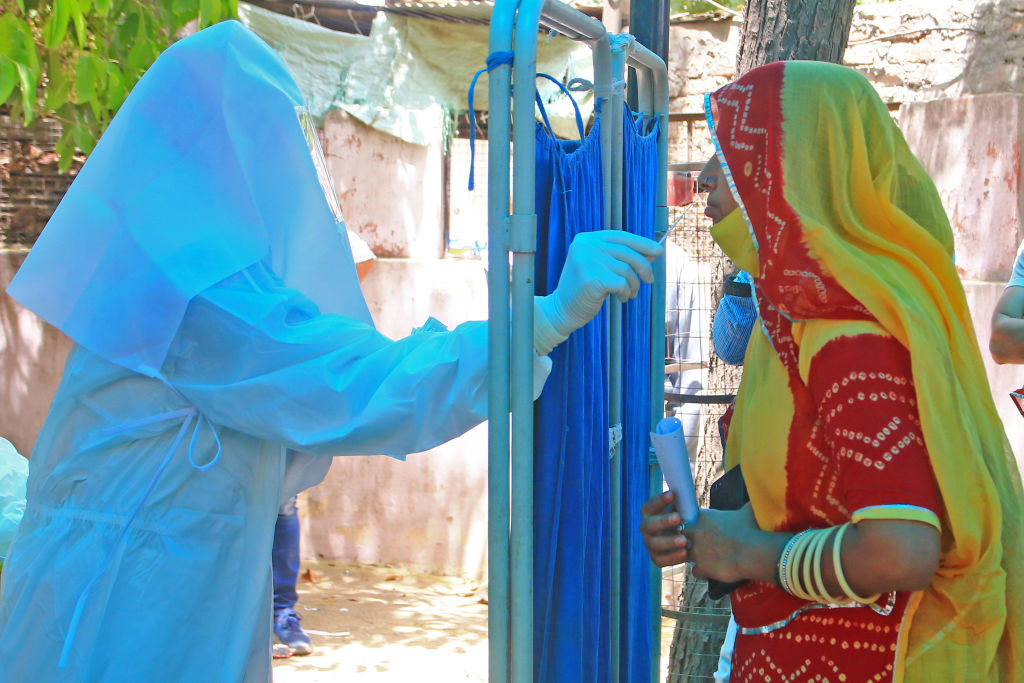 As coronavirus cases surge across India, a health worker administers a COVID-19 test at a hospital in Jaipur, Rajasthan, on April 6, 2021.
Vishal Bhatnagar—NurPhoto/Getty Images

India is battling a record wave of COVID-19 infections, and the surge of cases may cause more delays in the world’s access to India’s critical supply of COVID-19 vaccines.

On Tuesday, India confirmed a record 115,736 cases of COVID-19. The spike in infections is 10 times the number of cases the country averaged in January and February of this year, and makes India the only country in the world other than the U.S. to ever record more than 100,000 COVID-19 infections in a single day.

To combat the new COVID-19 wave, India has imposed limited curfews and lockdowns in some of the hardest-hit areas as it has attempted to ramp up its domestic vaccine campaign. But the acceleration of India’s own vaccine drive may come at the expense of rollouts elsewhere.

India promised to send hundreds of millions of vaccine doses this year to lower- and middle-income countries. But India’s top vaccine maker said on Wednesday that it will not export vaccine doses but rather prioritize domestic needs until India’s current COVID-19 wave subsides.

India has not officially banned the export of COVID-19 vaccines, according to an Indian government spokesman, but the Serum Institute has halted exports anyway.

In late February, Adar Poonawalla, CEO of the Serum Institute of India, said on Twitter that the Serum Institute had “been directed” to prioritize India’s vaccine needs over sending more doses abroad. At the time, Poonawalla did not disclose if the Indian government or someone else made the order, but on Wednesday he said that the measure will extend until at least June.

The Serum Institute has “chosen to prioritize India temporarily for two months” during March and April, Poonawalla told the Associated Press on Wednesday.

He also explained that the Serum Institute may not resume its exports until India’s current wave of infections begins to subside.

“I am scared of what…we will have to do, and what will happen” if COVID-19 cases continue to rise in India, Poonawalla tells the Associated Press. “We are going to have to keep supplying to India and not anywhere else. Because we have to protect our nation.”

Poonawalla told Indian media Tuesday that the Serum Institute is on pace to produce 60 million doses of Covishield per month, but India may be slow to make a dent in curtailing local infections even with the added supply.

India has administered over 84 million vaccine doses to its population using Covishield, along with another shot from Indian firm Bharat Biotech. But the doses have inoculated only 3.1% of India’s population of 1.4 billion, and herd immunity is likely years away at the current pace of vaccinations.

Covax, meanwhile, is likely to slow its global vaccine rollout while India focuses on its domestic population.

“We had expected, in March and April, about 90 million doses [from the Serum Institute], and we suspect we’ll get much, much less than that. And that is a problem,” Seth Berkley, CEO of Gavi, a co-leader of Covax, told CBS on Sunday.

On Monday, the WHO reported that Covax had delivered over 36 million COVID-19 vaccine doses to 84 countries but did not specify how many of those doses were supplied by the Serum Institute. AstraZeneca is also supplying Covax with its own version of the vaccine. U.S. pharmaceutical giant Pfizer agreed in January to contribute 40 million vaccine doses produced by German drugmaker BioNTech to the Covax facility, though the WHO estimated that Pfizer would supply just 1.2 million of that total in the first quarter of 2021.

Poonawalla told the AP that India’s prioritization of its domestic campaign is not unlike how the U.S. or Europe have favored their own vaccine needs over those of other countries.

He has a point.

In late March, the European Union tightened export controls on how many COVID-19 vaccines could be shipped abroad while it focuses on supplying vaccines to member states. Countries like Australia have accused the EU of using the policy as an export ban.

Vaccines manufactured in the U.S. have been shipped overseas, but Washington has taken steps to hoard doses for domestic use. Vanity Fair reported this week that in the U.S., major vaccine manufacturers Pfizer, Moderna, AstraZeneca, and Johnson & Johnson signed agreements with former U.S. President Donald Trump’s administration that bars them from donating any excess COVID-19 vaccines to other countries. President Joe Biden’s administration is in talks to begin donating vaccines abroad later this year, but for now is sticking to the terms of Trump’s agreement, according to the report.

The U.S. currently leads the world in administering COVID-19 vaccines. It has delivered over 168 million COVID-19 shots to its citizens. Biden said on Tuesday that he expects all American adults to be eligible to receive vaccines by April 19.

More than 85 of the world’s poorest countries, meanwhile, may not have widespread access to COVID-19 vaccines until at least 2023, according to the Economist Intelligence Unit.

“It’s a travesty that in some countries health workers and those at-risk groups remain completely unvaccinated,” WHO director-general Tedros Adhanom Ghebreyesus said at a press conference on Tuesday. “Scaling up production and equitable distribution remains the major barrier to ending the acute stage of the COVID-19 pandemic.”