Free food? Free weed? Cash? What would it take for you to get the COVID vaccine? 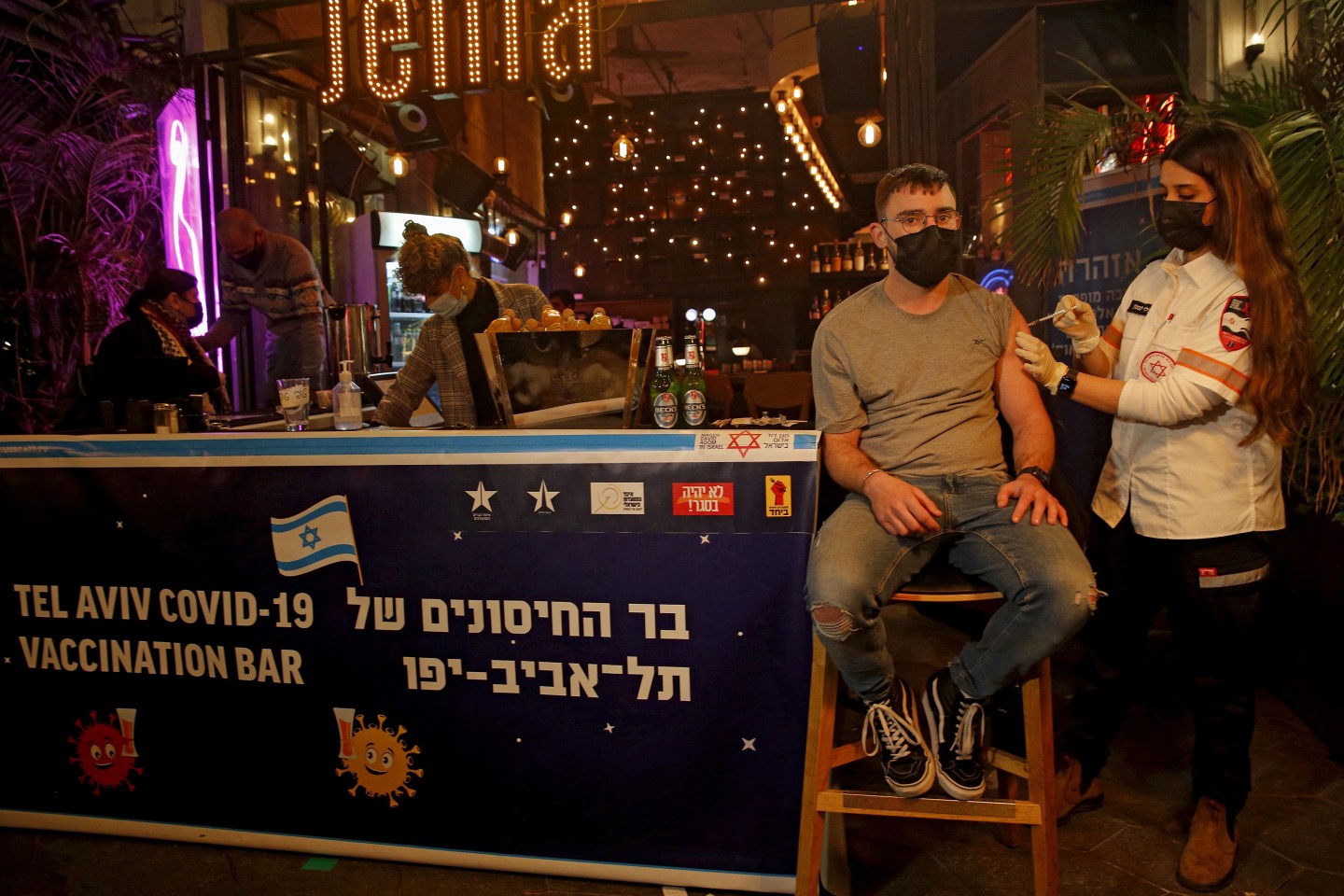 As the coronavirus vaccination campaign ramps up, businesses have looked for ways to drive up vaccinations, writes Carolyn Barber.
Gil Cohen—MAGEN/AFP via Getty Images

At a bar in central Tel Aviv, customers who’ve just received their shot at a nearby COVID-19 vaccination van may line up for a free beer. In Dubai, three restaurants keep it simple: Show proof of one vaccination and take 10% off your bill; if you’ve had both shots, it’s a 20% discount. And in Michigan, proof of vaccination will earn you a joint, if that’s your thing.

Clearly, the push to globalize the rollout of a lifesaving vaccine is moving into unfamiliar and perhaps uncharted territory. In a year filled with bursts of unprecedented news, this may be the most fitting coda imaginable.

Though demand for the COVID vaccine far outstrips supply in the U.S. right now, such is not the case around the world. As of this writing, 216 million vaccinations have been given globally, but while countries like Israel have achieved a 49% vaccination rate, the U.K. stands at about 26%, and the U.S. is around 13%—and some countries have not administered a single dose. While the reasons for that are as varied as the cities and nations themselves, there’s certainly no doubt that the medical community is strongly supportive of mass efforts to educate and ultimately vaccinate large swaths of people.

But the increasing participation in that process of encouragement by individual businesses, many of them smaller and individually owned both here and abroad, suggests another dynamic at work altogether. In this case, the motivation is simple: Successful mass vaccination equals a small step toward normalcy. And normalcy, for business, is everything.

“We wanted to create a promotion to celebrate the one thing that will allow us to get back to the business we love,” Jared Gadbaw, chef and owner of Oak and Reel, an Italian seafood restaurant in Detroit, said via email. The restaurant, which is currently operating five hours a day, four days per week, is offering a 50% discount off anything on the menu to diners who can show they’ve been vaccinated.

Across the country and around the world, local businesses have been bedeviled by constantly changing (and sometimes contradictory) guidance with regard to COVID-19. From takeout-only mandates to limited seating and back again to full closure, the food and beverage industry in particular has been ravaged by the economic effects of entire towns and cities functionally going off the grid.

“There is a lot of anger and frustration within the hospitality industry regarding COVID restrictions,” Jeff Hoffman, owner of the Village Tap, a 30-year-old craft beer bar in the Roscoe Village neighborhood of Chicago, wrote in an email. “Promoting the vaccines was a way for us to begin to engage around how we are going to get out of the situation we are currently in, in a positive and constructive way.”

Hoffman’s idea: Hand out 1,000 gift cards, each of them worth $10, to any customers who have received the vaccine. And while the owner said he is “not naive enough to think the $10 gift is enough to change someone’s mind,” he’s really thinking about the bigger picture. The idea, he said, is to stir up the conversation and generate enough enthusiasm among those who do participate that others “who have been on the fence” might consider the possibility of getting a shot.

StarMetro, the bus service in Tallahassee, offers free rides for seniors to vaccination sites like those at Publix and Walmart—part of the city’s effort to solve what one commissioner called the “people puzzle” of the COVID vaccine rollout. In Chicopee, Mass., the Rumbleseat Bar and Grille offers a 20% discount to vaccinated customers on Mondays—for three reasons, according to owner Bill Stetson: “to thank health care workers, help our industry get back to life, and encourage more people to get immunized.” In a phone interview, Stetson said, “I want to reward the ‘lions’ on the front line, and I want to motivate people too.”

In some ways, these small businesses are emulating practices of encouragement that have been taken up on a broad scale overseas. Israel, with nearly half its population already having received at least one dose of the vaccine, has been fervent in getting the other half to show up. On Twitter, the country’s Health Minister Yuli Edelstein said: “Decide whether you are part of the celebration or whether you will be left behind.” In a later tweet he explained that only “green label holders”—those who are either fully vaccinated or recovered from COVID-19—will enjoy places like gyms, hotels, theaters, sporting events, and places of worship. Bars and restaurants will be included in early March. Edelstein did not mince words: “Go get vaccinated!”

“The emphasis of the city’s leadership is now to vaccinate the younger population—and we are reaching them via short, rapid, effective, pinpoint pop-up events,” said Eyal Basson, the Tel Aviv–Yafo government’s head of communications strategy, in an email exchange. “By offering incentives, we believe that we can reach young audiences, where the vaccination rate is not sufficiently high.”

Last weekend, mobile vaccination units were rolled out in seven additional locations, including on the beachfront and in popular parks and squares in Tel Aviv. In many of the locations, incentives ranged from knafeh (a Middle Eastern pastry) to pizza to coffee, and Basson said more than 2,500 additional citizens were vaccinated as a result. “The financial cost for the city is very low, as we are referring to cheap incentives such as drinks and food—but the benefit is tremendous for the city, the economy, and the entire country.”

In the Tel Aviv suburb of Holon, DJs have been hired to create a festive atmosphere that might attract a young crowd. In the ultra-Orthodox town of Bnei Brak, where fewer than 10% of the community is fully vaccinated, the municipal council came up with the idea to serve free cholent, a stew of beef, potatoes, and beans, at vaccination centers to entice residents to get their shots.

Outside Jenia Bar in Tel Aviv, meanwhile, a vaccination van is stationed nearby. A representative from the van checks people’s identification, prescreens them about prior allergic reactions, administers the vaccine, and then offers the newly anointed a choice from the bar: a free bottle of nonalcoholic beer or another beverage. Said Yaara Maimon, a vaccine recipient, “The bar where I used to have tequila shots just became the bar where I received my first COVID-19 shot.”

The bar owner, Yonatan Levin, told me in an email that part of the importance of the initiative was to “place a spotlight on the fact that whoever is vaccinated in this industry will likely be able to return to a normal routine of recreation and enjoyment—similar to the sports and culture sectors that resumed operations this week.”

And if specific types of food or drink won’t entice you, perhaps a very particular herb will. At the Greenhouse of Walled Lake, in Michigan’s Oakland County, the “Pot for Shots” promotion is alive and well. Jerry Millen, who runs the dispensary in partnership with the Ubaked Cannabis Company, created a program whereby a person with proof of vaccination can walk into his store and collect a free pre-rolled joint, no questions asked.

On a typical day, Millen told me in a phone call, his business serves anywhere from 1,000 to 1,400 customers. This month, between 100 and 200 clients each day are showing proof of vaccination and collecting their reward. “We have given away almost 4,000 pre-rolls, which cost about $10 apiece,” said Millen. “This was a way for me to kind of normalize cannabis, promote cannabis, and tie it into maybe helping in some small way in the pandemic.”

The program, Millen said, has been such a success that he is going to extend it through March. It has attracted media attention from places like CNN and NBC—but also, Millen said, from a Russian media outlet, an interesting development given the citizenry’s uncertain reaction to that country’s rushed rollout of the Sputnik V vaccine.

“The response has been 99.9% positive,” Millen said. “If maybe one person says, ‘I’ll get my shot today, then I’ll get my free pre-roll’; if it helps just one person make the choice to do it, that’s the goal. We’re all hoping that the COVID vaccine is the beginning of the end for this pandemic.”

DC Marijuana Justice is in the process of “carefully machine-rolling joints wearing masks and gloves,” in Washington, D.C., according to cofounder Adam Eidinger. In an email, he said the program “Joints for Jabs” will be giving away more than 5,000 joints (with proof of vaccination) on April 20 at vaccination sites. In return, the business is asking recipients to contact their council member and demand equitable cannabis legislation.

As that might suggest, this is a crossroads where a national health emergency meets a national business emergency. Throughout corporate America, companies are offering financial incentives for their own workers to get vaccinated, thus allowing them to stay on the job. In recent weeks, McDonald’s, Target, Aldi, Dollar General, Chobani, Trader Joe’s, Instacart, Petco, Kroger, Darden Restaurants, and others have offered workers either hours of pay in exchange for their taking two doses, or a one-time stipend so their workers can take paid leave to get vaccinated.

A survey of 1,105 employees by Blackhawk Network suggests that strategy may well pay off. It found that while 40% of the employees surveyed were indecisive or planning to not get the vaccine, one-third of workers would be willing to get vaccinated for as little as $100.

For some, the question of why a person would need to be incentivized to accept a vaccine that has the potential to save lives is both baffling and unanswerable. Without a doubt, the numbers—over 2.5 million dead worldwide, and 500,000 of our fellow citizens fallen in the U.S.—make a compelling case for mass vaccinations without pushback.

But that is not the world in which we live. That said, promising recent data—Israel’s health ministry reported that two weeks after Pfizer’s second shot, the vaccine prevented 98.9% of deaths due to COVID-19—may well lead to a new surge in global vaccination rates. And a little closer to home, if a discounted meal or a free drink persuades someone to act, good on them. At this point, we’ll take it any way we can get it.

Carolyn Barber has been an emergency department physician for 25 years. She is cofounder of the homeless work program Wheels of Change and author of the book Runaway Medicine: What You Don’t Know May Kill You, which was a top-ranked Amazon bestseller in health care administration.