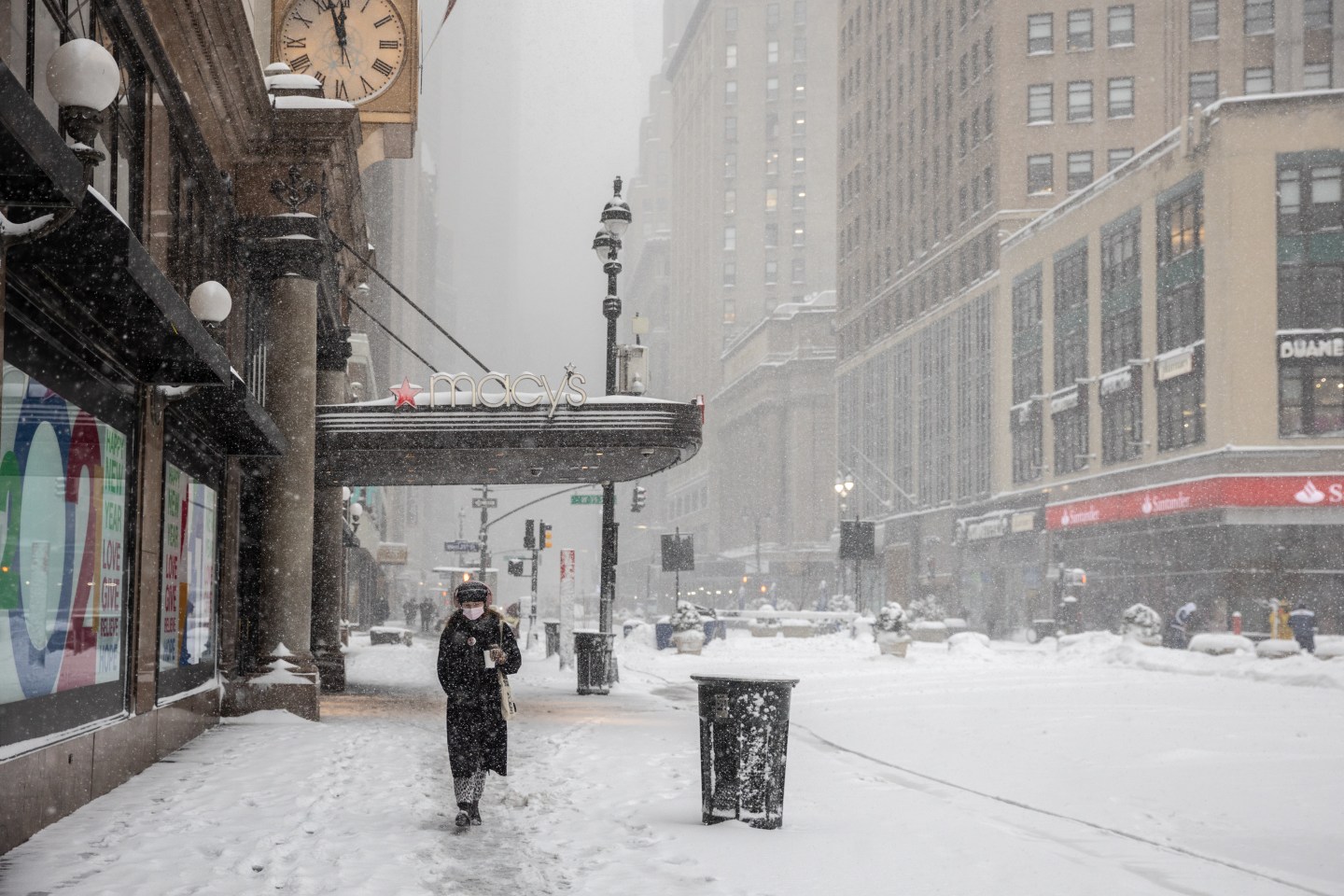 A pedestrian passes in front of Macy's flagship department store as snow falls in the Herald Square area of New York City on Feb. 1, 2021.
Photographer: Jeenah Moon/Bloomberg via Getty Images

In a horrible year for Macy’s, during which the pandemic decimated its already struggling business, one big source of relief for the department store operator came from its e-commerce operations.

Macy’s—long a strong online retailer—said on Tuesday that online sales rose 21% during the holiday quarter and generated almost half of its sales, blunting the sales drop at its physical stores. Comparable sales including e-commerce fell 17% in the quarter.

Already a top 10 digital retailer, Macy’s now says it can get to $10 billion in digital sales within three years, up from about $7.6 billion in 2020. (It lags behind only Amazon in online U.S. shoe and clothing sales.)

Macy’s CEO Jeff Gennette told Fortune on Tuesday that the company would hit that milestone by widening its online assortment with more styles and sizes than it carries in stores, having the brands Macy’s sells ship more items directly to customers, adding more brands and product categories, and using its stores to an even greater degree to help it fill orders. Last quarter, stores helped fill 25% of Macy’s online orders either by having shoppers come to retrieve them or using store inventory to fill them, two things that bolster profits.

At the same time, Macy’s executives on a conference call with Wall Street analysts defended the role of stores in its operations, even as the retailer continues to close 125 stores in lower-tier malls.

Stores act as billboards and marketing tools for Macy’s and remind shoppers it exists. Mitchell said Macy’s online sales per capita were around twice or three times higher in markets where it has stores. (Macy’s has been tinkering with a small-store format that Gennette says could help it “backfill” markets where it doesn’t have stores and mitigate that risk.)

Macy’s remaining stores will remain key to supporting its e-commerce, sustaining customer awareness, and offering them something more exciting than online shopping. And Gennette sees a key benefit there for stores from his $10 billion e-commerce push in addressing a long-held customer gripe.

“They were cluttered, so this is an opportunity to get them streamlined, cut out a lot of duplication, get things out of the aisle,” Gennette said.

That will be key to protecting the venue in which Macy’s still gets the bulk of its business: stores. GlobalData managing director Neil Saunders said in a research note, “Standards in most Macy’s shops, for example, are little short of appalling.”

Another benefit to Macy’s e-commerce push: It will reduce the chain’s reliance on clothing, one of the hardest-hit parts of consumer spending during the pandemic, and allow it to expand its research in growing areas like home goods and beauty. By having outside brands fill more orders themselves and spare Macy’s from having to buy and deal with extra inventory, the logic goes, Macy’s will be more flexible in getting into hot categories faster.

“Apparel, I believe, over time is going to continue to shrink as a percentage of our overall business,” he says.

Luckily for Macy’s, the company has been building up its e-commerce muscle for years, being one of the first big retailers to facilitate in-store pickup of online orders. Now, as the department store looks to recover from the biggest storm in its history, it will rely on its digital prowess even more. And face stronger competitors: Much of what Macy’s outlined on Tuesday echoes what Nordstrom, for one, announced earlier this month.

“We have the opportunity to push the gas on all the things we know maintain this growth,” Gennette said.