What you should know about Donald Trump’s second impeachment trial 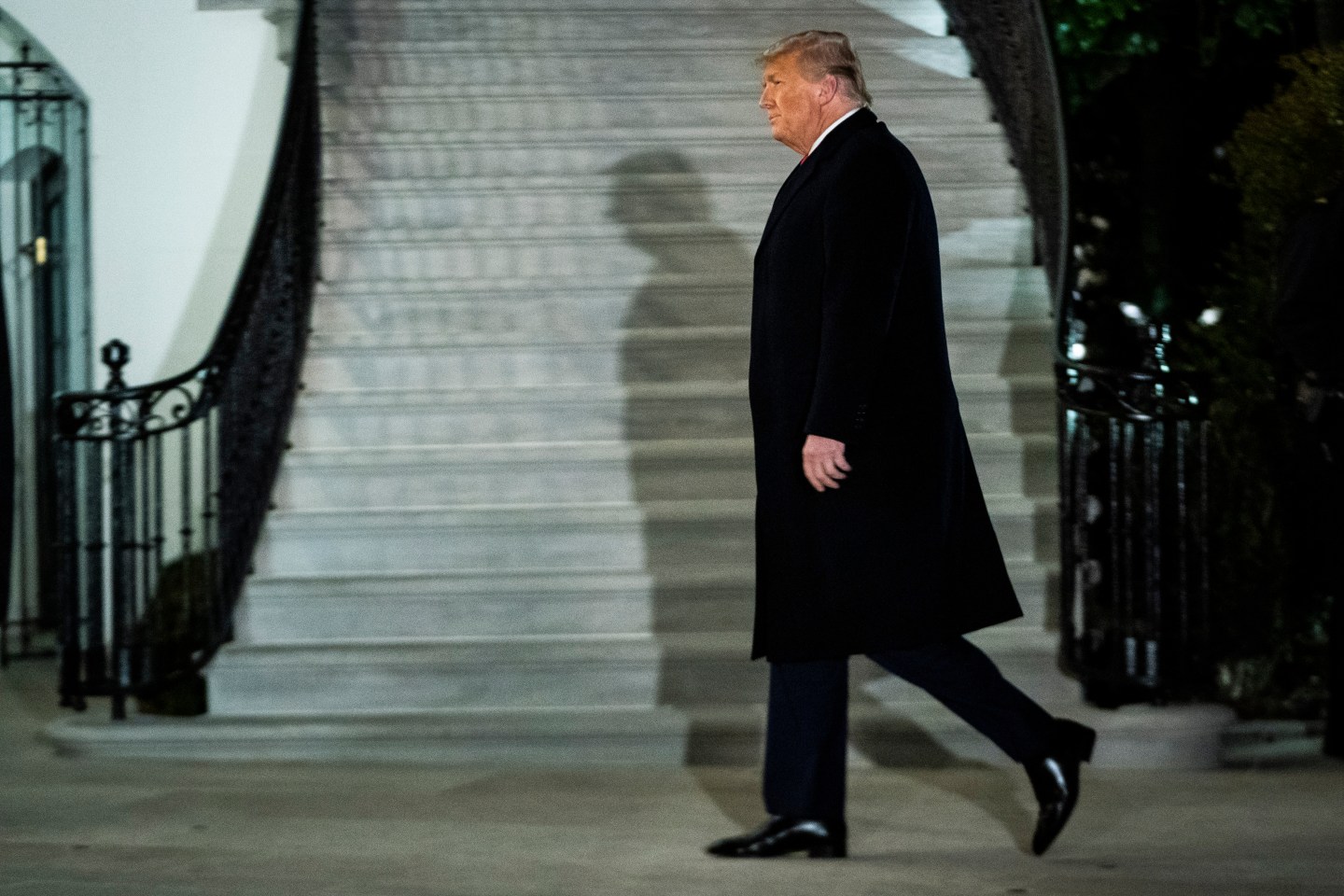 The same Senate chamber that was overrun by insurrectionists will be, starting on Tuesday, the somber court for Donald Trump’s impeachment trial, as senators weigh making him the first president disqualified from future office.
abin Botsford—The Washington Post/Getty Images

The same Senate chamber that was overrun by insurrectionists will be, starting on Tuesday, the somber court for Donald Trump’s impeachment trial, as senators weigh making him the first president disqualified from future office. A year ago, following a trial largely drama-free because its end result was never much in doubt, the Senate acquitted Trump of two articles of impeachment. Much is different this time. Trump is an ex-president, the first to face impeachment proceedings after leaving office; the person wielding the gavel will be different; big-name defense attorneys aren’t lining up to defend Trump; and Republicans may be less united in their support of him.

The single article of impeachment passed by the House on Jan. 13, supported by all 222 Democrats present plus 10 Republicans, charges Trump with inciting the Jan. 6 insurrection at the U.S. Capitol that caused five deaths and disrupted the certification of Joe Biden’s victory. The article of impeachment also notes Trump’s other efforts to overturn the certified election results, including a phone call pressuring Georgia Secretary of State Brad Raffensperger to find just enough votes for him to overturn that state’s election.

2. What are the arguments?

The House managers prosecuting Trump, all Democrats, said in a pretrial brief that the former president was “singularly responsible” for the storming of the Capitol. Setting the day’s events in the context of his months-long campaign to overturn the election results, they wrote that Trump “summoned a mob to Washington, exhorted them into a frenzy, and aimed them like a loaded cannon down Pennsylvania Avenue.” Trump’s defense team branded the impeachment an act of “political hatred” by House Democrats and said the Senate trial shouldn’t be held because Trump is now out of office. They said Trump’s Jan. 6 speech rallying political supporters against the electoral vote count wasn’t an incitement to violence and, regardless, was protected under the First Amendment.

3. How long will the trial take?

Possibly just a few days, in contrast with Trump’s first impeachment trial, which lasted three weeks. Democrats, who are driving the impeachment effort but are also newly empowered in the Senate and White House, have indicated they want a speedy trial in part because they have so much other urgent work to attend to. Also, their case relies in large part on events of public record and what lawmakers themselves experienced that day. It’s also not clear how much time Trump will want to take up in his defense.

4. Who presides over the trial?

Senator Patrick Leahy, a Vermont Democrat. As the senior member of the majority party, he serves as the Senate’s president pro tempore, or “president for the time being,” which means he’s the presiding officer unless Vice President Kamala Harris is in the chair. (The vice president’s official roles include Senate president.) Presiding over Trump’s 2020 impeachment trial was Chief Justice John Roberts, as directed by the U.S. Constitution. Who should preside over the trial of an ex-president is a never-before-litigated question.

5. Is it constitutional to try a former president?

The legality of a Senate impeachment trial after a president has left office is an open question, never tested in the courts. A sparse but consistent line of non-presidential impeachments in the past suggests the Senate does have legal authority to put Trump on trial even after his term has ended. By a vote of 55 to 45, senators on Jan. 26 overruled an objection by Republican Rand Paul, who sought to declare the trial unconstitutional on the grounds that Trump is no longer in office. In their pretrial brief, the House impeachment managers said there should be no “January exception” to limits on presidential power — meaning that a president shouldn’t escape an impeachment trial just because the actions in question came in an administration’s final days.

6. What are the prospects for a conviction?

Low, as evidenced by the fact that 45 of the Republican senators voted to declare the trial unconstitutional. It would take a two-thirds vote of senators to convict Trump, which means that if all 100 senators vote, at least 17 of Trump’s fellow Republicans would have to turn against him. Mitch McConnell, the Republican leader, will be key. He has said that the mob that stormed the Capitol was “provoked by the president” but hasn’t gone so far as to say he would vote to convict. Many Republican senators say convicting Trump would further divide the country.

7. What’s the point of a trial now that Trump is out of office?

Should Trump be convicted, a followup vote supported by a simple majority of senators could disqualify him from ever serving again in federal office. Trump has made noises about running for the presidency again in 2024, a prospect that alarms Democrats and complicates the ambitions of other Republicans who envision themselves in the Oval Office. If convicted, Trump also could lose many of the benefits afforded to former presidents, which, under a 1958 act, include a lifetime pension, an annual travel budget and funding for an office and staff. Lifetime protection by the Secret Service is one benefit that would not be affected.

8. Has disqualification ever happened?

The House has initiated impeachment proceedings more than 60 times and voted to impeach 15 federal judges, one senator, one cabinet secretary and three presidents — Andrew Johnson in 1868, Bill Clinton in 1998 and Trump in 2019. Of that group, eight judges were convicted and removed from office by the Senate. Three of the judges were also disqualified from holding office again. The last instance was in 2010, involving Thomas Porteous, a federal judge in New Orleans whom the Senate found guilty of corruption and making false statements, including during his confirmation hearings.

9. Who will present the case for the House?

The House managers who function as prosecutors will be led by Maryland Representative Jamie Raskin, who is a member of the House Judiciary Committee and a professor of constitutional law. Other managers include Diana DeGette of Colorado, David Cicilline of Rhode Island, Joaquin Castro of Texas, Eric Swalwell and Ted Lieu of California, Stacey Plaskett of the U.S. Virgin Islands and Madeleine Dean of Pennsylvania. Outside lawyers Barry Berke and Joshua Matz, who helped present the House’s case against Trump in his first trial, have been hired to help with the second one.

David Schoen, who represented Trump adviser Roger Stone, and Bruce L. Castor Jr., formerly an acting attorney general of Pennsylvania, will lead the defense, Trump announced on Jan. 31. At first, Trump had hired Butch Bowers, a South Carolina attorney recommended to him by Senator Lindsey Graham. But he and other lawyers on his team withdrew from Trump’s defense barely a week before the trial was to begin. Trump, at his first impeachment trial, was defended by some bigger-name lawyers such as former Florida Attorney General Pam Bondi, former independent counsels Ken Starr and Robert Ray, and retired Harvard Law Professor Alan Dershowitz.

11. Will there be witnesses?

Through his attorneys, Trump rejected a request from the House impeachment managers for him to testify under oath. No witnesses were called to testify in the House, where Democrats made the case that Trump had essentially incited and supported insurrection in public view. In last year’s Trump trial, the Senate’s Republican majority rejected attempts by Democrats to call witnesses to support their case that Trump had abused the power of his office in pressuring Ukraine’s president to dig up dirt on Biden, who was then emerging as a likely Trump political challenger.

Mostly sit and listen, a departure from usual practice. On a normal day in the Senate, members address a mostly empty chamber, their comments primarily geared for the C-Span camera. During Trump’s trial last year, senators sat at their desks through long nights of impeachment proceedings. To make sure they paid attention, they were forbidden from carrying phones and other electronic devices into the chamber. Large cubbyholes were installed outside the chamber and in cloakrooms to store electronics. It’s not clear if the Senate will make any accommodations for social distancing. The pandemic had not yet spread in the U.S. by the time of Trump’s impeachment trial in 2020.

–With assistance from Greg Stohr.