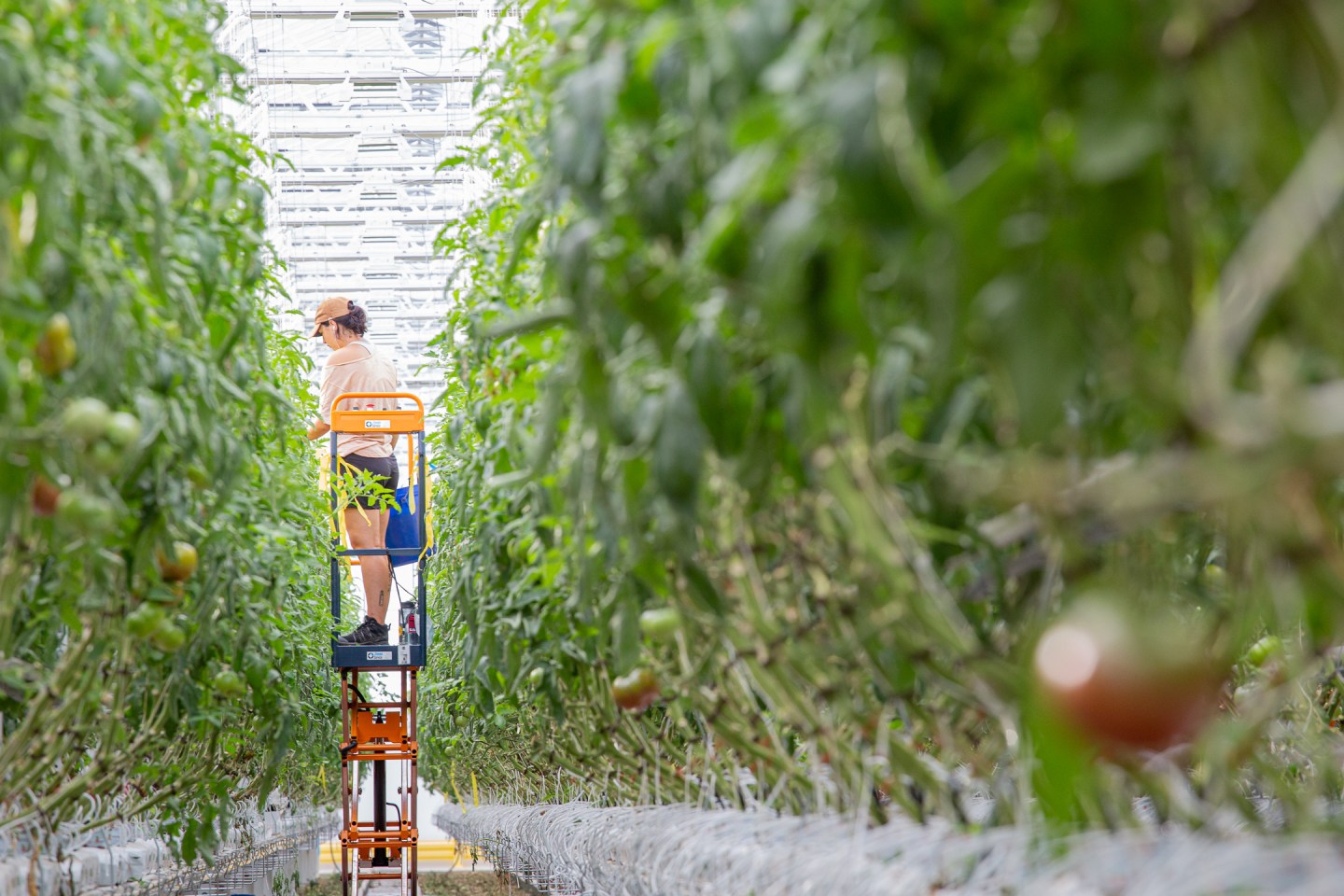 Inside VSL (a reference to Ville St-Laurent, the district in which the farm is located); it’s the company’s newest greenhouse, and it sits atop a former Sears warehouse.
Courtesy of Lufa Farms

The world’s biggest commercial rooftop greenhouse sits atop a former Sears warehouse in a semi-industrial northwestern quarter of Montreal. Early every morning, staff pick fresh vegetables, then bring them downstairs, where they get packed into heavy-duty plastic totes along with the rest of the day’s grocery orders.

Tablets loaded with custom pick-and-pack software tell them where to put what: This basket has lettuce, tomatoes, and cucumbers, plus some chicken, eggs, and milk. The next one has eggplant, cashew Parmesan, tomato sauce, fresh pasta, and vegan ground round crumble. Whatever Lufa doesn’t grow in its four greenhouses comes from local farms and producers, mostly from within 100 miles.

This is a modern foodie’s dream: a tech-forward online shop full of locally grown, pesticide-free, ethically-sourced products at reasonable price points, delivered once a week to either your doorstep or a local pickup point in your neighborhood.

It’s stunning to think Lufa was founded by two people who’d never even grown a tomato before, let alone sold one. “We said, ‘Instead of learning how the food world works, let’s just come up with what we feel the food world should be,’” says Mohamed Hage, 39, who cofounded Lufa with Lauren Rathmell in 2009.

To them, it looked like this: rooftop greenhouses that bring agriculture into cities. No pesticides, herbicides, or fungicides. Composting their green waste. Selling direct-to-consumer the same day the food is harvested. Capturing and reusing rainwater. Reusable packaging.

That’s exactly what they now have—and they feed a portion of Montreal, the second-biggest city in Canada, with it.

Inside the Anjou rooftop greenhouse, constructed in 2017, where lettuce, herbs, and other greens grow across the 63,000-square-foot space.
Courtesy of Lufa Farms

Back in the warehouse, workers poke at their tablets, checking off items as they’re packed into the boxes.

Customers—Lufavores, as the company calls them—typically place their orders a few days before delivery through the online store, dubbed “the Marketplace,” which Lufa built from scratch in 2012. That’s how Lufa’s suppliers know how much product to provide: They get forecasts first, then final order numbers, through their Lufa software. Some items, like frozen meat, can be delivered to the warehouse once a week. Others, like bread, arrive fresh every day.

Artisanal Montreal bakery la Fabrique Arhoma started supplying Lufa with bread and pastries about six years ago, co-owner Ariane Beaumont tells Fortune. Today, they hand-make 6,000 individual items a day for Lufa. Beaumont said Lufa now accounts for between 30% to 40% of her commercial sales; since pandemic shutdowns, a lot of the product destined for restaurants got redirected to Lufa. “They’re an exceptional company. I don’t know how they do it,” Beaumont says. “And they pay the fastest, too.”

Technology is the underpinning of Lufa’s success, and the owners know it.

“We see ourselves as a technology company, in the sense that we solve with software,” Rathmell, 32, says. They didn’t really have any other choice. To fulfill that dream they had back in 2009—years before COVID-19 forced most grocery stores to enable online shopping—they had to do it themselves.

“Nothing off-the-shelf can be applied to what we do, because it’s so complex,” Rathmell notes. “We harvest food ourselves; we gather from farmers and food makers throughout the province; most of it’s arriving just in time throughout the night to be packed in baskets for that day, and every order is fully unique.”

Those technologies were tested on that fateful Friday the 13th last March, when Quebec and Canada each announced their first waves of COVID-19 lockdowns. People panicked, rushing to the grocery store to stock up on flour and toilet paper.

Online, new sign-ups for Lufa’s weekly grocery baskets exploded, and existing subscribers began ordering more than they’d ever ordered before—all while Lufa’s pickup points were shutting down. “We essentially doubled overnight,” Rathmell recalls. Lufa was forced beyond its operational capacity, and the cracks started showing in the systems and software that had, until that point, done a fine job getting the company by.

Lufa temporarily closed the website and opened a wait list. The staff analyzed the pandemic’s trajectory and how they had to adapt at each step; reconfigured their warehouse floor to station workers further apart; then relaunched at the capacity they could handle, gradually scaling each week until they hit their usual stride. Today, they’re humming along at 25,000 baskets a week.

Leading with tech helped make them nimble and strategic during those hairy early pandemic days, said Hage and Rathmell. After some recalibrations and new developments, their software and processes can now handle more customers, vendors, and processes—critical elements as the company continues to scale its greenhouse operations. In August of 2020, Lufa opened its fourth greenhouse, doubling its square footage. The four greenhouses combined produce 57,000 pounds of food a week. A fifth is planned for this year.

“Our objective at Lufa is to get to the point where we’re feeding everyone in the city,” Hage says.

And after Montreal? They’re planning on a yet to be determined second site in the northeastern pocket of North America, ideally this year. “Our vision is to grow food closer to where people live, and grow it more sustainably,” Rathmell says.

The percentage of energy saved by each rooftop greenhouse? Fifty percent when compared with a similar-size greenhouse on the ground.
Courtesy of Lufa Farms

Bringing high-yield crop production into cities is a smart answer to many modern challenges in environmental and human health.

Mark Lefsrud, an associate professor of agricultural and environmental sciences at McGill University, points out that embracing technologies like LEDs and automation to grow indoors and in urban greenhouses means shorter supply chains, better nutritional integrity, less food waste, and reduced vulnerability to climate swings. In cities fed primarily by low-carbon energy (hydroelectricity in Montreal’s case), indoor growing versus importation becomes even more of a no-brainer.

“I’ve been working in the controlled environment and greenhouse industry for 20-some years, and having a company like Lufa has brought a lot of attention to not just urban agriculture, but also the need for greenhouse production,” Lefsrud says, adding that Lufa’s success has prompted more government investment in the sector overall.

“The Quebec government now takes this as a serious venture system, which then means that the students that I’m training, and research we’re doing here at the university, now have employment and have the possibility of setting up their own system,” says the McGill professor.

That idea, of developing more vertically integrated food systems, is a passion of Hage’s—not only for the idea of cutting out production and transformation middlemen to improve profit margins, but also to improve quality, traceability, and ultimately the ethics of food production.

“You know, every time we talk to someone about it, we feel like it’s the ’80s, and we’re holding a big solar panel trying to convince the room that this is the future,” Hage says.

As the larger agricultural industry catches on to vertical integration, it seems Hage and Rathmell are no longer mad scientists with a crazy dream. Instead, they are the voice of reason—and a new generation of food.