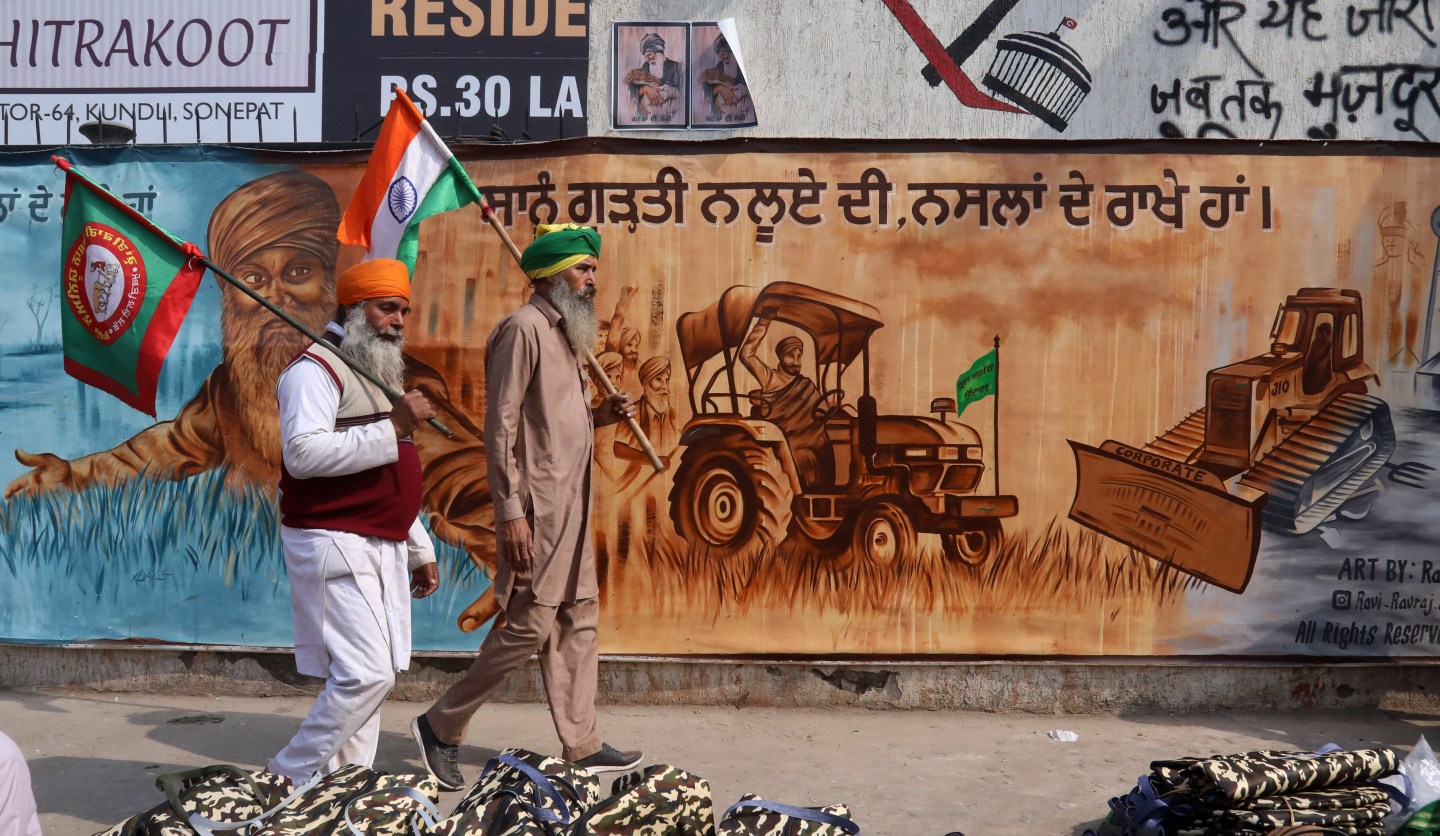 Thousands of Indian farmers called on Prime Minister Narendra Modi’s government to lift its blackout on phone and internet services ahead of a push to block roads across the country on Saturday to escalate protests now in their fourth month.

The farmers, backed by a growing international campaign of celebrities and activists such as Rihanna and Greta Thunberg, issued a statement Friday calling for an “immediate reinstatement” of telecommunciations services that were disrupted at protest sites outside of the capital, New Delhi border. “The government’s efforts to suppress the voice of disagreement continue,” the farmer unions said in a statement.

India restricted internet use more than any nation in 2020 and suffered the highest economic cost as a result, according to a report by Top10VPN.com, a company that reviews virtual private networks. Authorities have resorted to internet shutdowns to stem protests in recent years, including nationwide demonstrations over a discriminatory citizenship law and after it revoked the special autonomous status of Kashmir, the country’s only Muslim majority region.

“Time and again government authorities use times of political unrest to monopolize their control over information,” said Allie Funk, New York-based senior research analyst at Freedom House. “That the world’s largest democracy can carry out such sweeping abrogations with little or no push back from other countries has just allowed the curbs to be normalized.”

India’s government has toughened its stance against the protesters after violent clashes broke out last month: Authorities fortified Delhi’s borders with concrete barricades, concertina wire and long metal spikes at key protest sites in addition to cutting water, phone and internet. On Wednesday, the government issued a legal notice to Twitter over its decision to restore the handles of users who tweeted the hashtag #ModiPlanningFarmerGenocide on Jan. 26, saying those tweets were “designed to inflame passions, hatred and factually incorrect.”

The farmers camped outside the capital are demanding a repeal of laws passed last year that they claim favor big companies over small landholders. They have rejected an offer by Modi’s government to suspend the reforms for 18 months, as well as a mediation process established by the Supreme Court.

Modi’s administration has defended the laws, saying they eliminated cartels that exploited farmers and would ultimately boost incomes by making the agricultural sector more competitive. The legislation passed easily in a parliament dominated by Modi’s allies, which won a landslide in a national election in 2019.

The increased global attention on the farmer protests threatens to damage India’s reputation as it looks to attract more investment from companies looking to diversify supply chains away from China in the wake of the pandemic and burgeoning geopolitical tensions. The country is among the world’s worst hit by Covid-19 and faces an unprecedented economic recession.

The Biden administration also weighed in on the protests, backing the farmers in their call for access to the internet. “We recognize that unhindered access to information, including the internet, is fundamental to the freedom of expression and a hallmark of a thriving democracy,” it said in a statement on Thursday.

India’s crackdown on the internet could hurt the country’s relations with democratic partners such as the U.S., U.K. and Japan, according to Raman Cheema, Asia policy director and senior international counsel at Access Now, an internet freedom advocacy group.

“It doesn’t help combat violence,” he said. “It only makes things worse.”

–With assistance from Manish Modi.