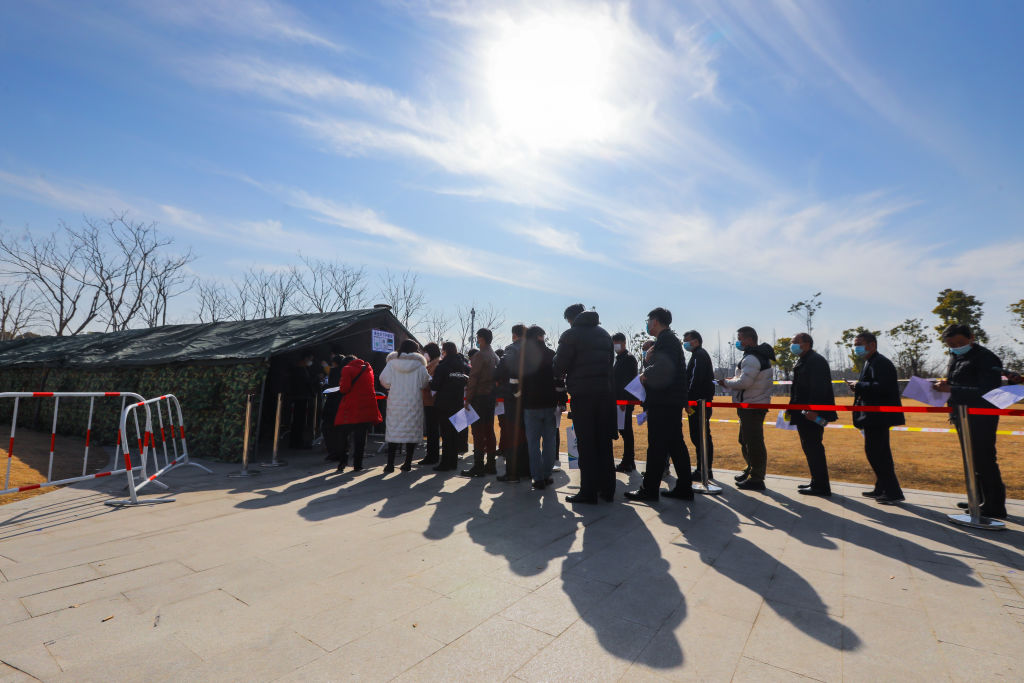 In late December, Will Henry, a 31-year-old American teacher in Shanghai, woke up to an email from his school saying he had three hours to decide if he wanted to sign up for a COVID-19 vaccine.

Henry said he was excited to receive the email but apprehensive, too, since he didn’t know much about the vaccine he was being offered, a jab from Chinese state-owned vaccine maker Sinopharm.

Henry says the email included a memo with a few details about the vaccine, including that it was 79% effective in preventing COVID-19 infections. Days earlier, Sinopharm had declared its vaccine 79% effective without releasing Phase III trial data to back up the claim.

“It pitted two parts against myself,” said Henry. “I am very pro-vaccination, but at the same time I’m a little bit hesitant about the lack of transparency [in China].”

Henry said his school later extended the deadline for deciding to 24 hours, and by that time, he had made up his mind that he would take the vaccine. Henry believed that getting a shot would make it safer and easier to travel back to the U.S to visit his family, whom he hasn’t seen since the onset of the pandemic in early 2020. He also said the approval of Sinopharm’s vaccine in places like the United Arab Emirates made him more eager to get injected.

“The fact that a foreign country had approved [Sinopharm’s vaccine] gave me more confidence in it,” Henry said. He got his first dose in early January and his second dose at the end of the month. “Even with 80% [efficacy], if there’s a lower chance I could give [the virus] to someone else, that’s worth it for me.”

Chinese vaccine makers Sinopharm and the private, Beijing-based Sinovac are now distributing their vaccines in over a dozen countries. But as their rollouts grow, the question of why these companies have not released more data about their Phase III trials becomes more urgent. In lieu of having access to transparent Phase III trial data, Henry and millions of others must base their decision to get the jabs on assurances from governments in China and elsewhere that the vaccines are safe and effective.

Sinovac and Sinopharm did not respond to Fortune’s requests for comment on this article.

The benefits of releasing clinical trial data go beyond helping improve public confidence in vaccines. Experts say that more publicly accessible data on the vaccines could help the vaccine makers market their shots in more countries.

But the Chinese vaccine makers so far have decided that the risks of releasing more data outweigh the potential benefits. And the global shortage of vaccine supplies has eased the pressure to release more trial data. Desperate countries are buying up Chinese vaccines even though their results remain a black box.

In late November, experts criticized Western vaccine makers like Pfizer and Moderna for presenting the efficacy figures for their vaccines—90% and 94%, respectively—via press release and not through a peer-reviewed medical journal, the gold standard for gaining acceptance in the scientific community. (Pfizer’s vaccine efficacy was later upgraded to 95%.)

“Reporting the COVID-19 vaccine trial results in press releases before publication in journals is neither good scientific practice nor does it help to build public trust in vaccines,” a group of scientists wrote for The BMJ medical journal in late November.

But it was just days before peer-reviewed assessments of the vaccines landed. Pfizer publicly released Phase III trial data through the peer-reviewed New England Journal of Medicine on Dec. 10, and Moderna published its own clinical data in the same journal on Dec. 30.

Publishing peer-reviewed data was not necessary for the companies to be authorized for distribution in the U.S., but it gave the public a detailed breakdown of how the trials were conducted. For example, in Pfizer’s case, it provided a detailed breakdown of the age of trial participants and a timeline for how many days it took for participants to reap protection from the jabs.

Chinese vaccine makers have released headline efficacy figures, but they so far have disclosed little else to back up those claims. And neither has published peer-reviewed Phase III trial data in any journal.

On Dec. 29, Sinopharm said its vaccine was 79% effective weeks after the United Arab Emirates said it was 86% effective.

Meanwhile, vaccine makers beyond Pfizer and Moderna are opening up about their results.

On Tuesday, Russia’s state-backed Sputnik V vaccine, which had previously drawn criticism for gaining approval before finishing clinical trials, published trial data in the British peer-reviewed medical journal The Lancet showing that it was 91.6% effective in preventing symptomatic COVID-19 infections. Scientists who had previously been skeptical of the vaccine lauded the data release and declared that it was now a viable tool in helping bring the COVID-19 pandemic to an end.

Why not release data?

Experts say Chinese vaccine makers’ refusal so far to release more data may boil down to two factors: the difficulty of aggregating data from multiple countries and the possibility that the data may not hold up to intensive scrutiny.

China’s relative success in containing COVID-19 has meant that the country is a poor testing ground for late-stage vaccine trials. Trial volunteers must be exposed to the virus to know if the vaccine works, so Chinese vaccine makers conducted trials in foreign countries that had higher rates of COVID-19.

“It may take a while…for Chinese researchers to reconcile the complicated multicountry clinical trial results,” says Jennifer Bouey, an epidemiologist and the Tang chair in China Policy Studies at the Rand Corporation.

Given the potential differences in trials across multiple jurisdictions, Chinese vaccine makers may not want experts taking a closer look at the data at this point.

For example, if a vaccine was found to be more effective among younger populations than the elderly, it may factor into whether countries or individuals accept the vaccine, says Yanzhong Huang, a senior fellow for global health at the Council on Foreign Relations.

There is also the possibility that the vaccines simply aren’t as effective as some of the headline figures suggest.

“If the data shows a relatively low efficacy rate, or one below the 50% requirement, then you have a problem,” says Huang. (Many countries, including the U.S., require COVID-19 vaccines to be at least 50% effective to be approved for distribution.)

Another complicating factor is China’s decision to not sign onto the same international standards that bind their Western counterparts.

Unlike the U.S., Germany, and over 30 other countries, China has not signed on as a member of the World Health Organization’s Stringent Regulatory Authority (SRA), Bouey says. SRA members pledge to abide by scientifically backed international standards in conducting vaccine trials that include policies like ensuring age variance in trials, so Chinese vaccine makers’ data may not look like data from their Western peers.

When will we see it?

Some places like Hong Kong and Singapore are asking Chinese vaccine makers for more data before approving the jabs, but so far, the lack of public Phase III trial data has not appeared to significantly hamper the companies’ global rollouts.

It’s not necessarily surprising that Chinese vaccines have been popular given that rich countries have cleared the shelves of early vaccine supplies from other drugmakers like Pfizer and Moderna, Bouey says.

“Vaccines with better data were mostly booked by the rich countries, and many middle- and low-income governments are under tremendous pressure to procure vaccine for their people,” she says.

Huang explained that one motivation to publish more vaccine data would be to sell the vaccines to more countries. But Chinese vaccine makers may be maxed out on supplies as it is.

In addition to distributing hundreds of millions of doses abroad, China has the added pressure of ensuring that it has enough doses in its home market of 1.6 billion people, where officials have been distributing Sinovac and Sinopharm doses for months.

On Dec. 31, China officially approved Sinopharm’s vaccine for general use but didn’t release any additional data on its trials. Even before that approval, Sinopharm had been distributing its vaccine in China outside of trials under an emergency use program as early as July 2020.

Similarly, Sinovac has been giving out its vaccine in China since mid-2020 through the country’s emergency use policy but has yet to be cleared for general distribution. Sinovac officially applied for market approval in China on Feb. 3.

Chinese authorities are currently engaged in a campaign to vaccinate 50 million people ahead of the upcoming Chinese New Year holiday in mid-February.

“Now that China prioritizes domestic vaccination needs, they are now seeking to curtail the export of China-made vaccines,” says Huang, estimating that China has already sold the vast majority of its available doses.

Henry, the teacher in Shanghai, says uncertainty over the Chinese vaccines because of questions over their safety and efficacy, combined with China’s relative containment of COVID-19, has made at least some of his colleagues less motivated to get injected.

Still, there is hope that more vaccine data may be soon on its way.

In late January, the World Health Organization said it was considering Sinovac’s and Sinopharm’s vaccines for emergency use authorization and may provide a decision on their approvals as early as March.

Bouey says that “by definition” of WHO bylaws, Sinovac and Sinopharm would need to submit publicly accessible trial data in order to meet the WHO’s requirements, meaning that more data will likely see the light of day.

“The vaccine data will need to be released eventually,” she says.