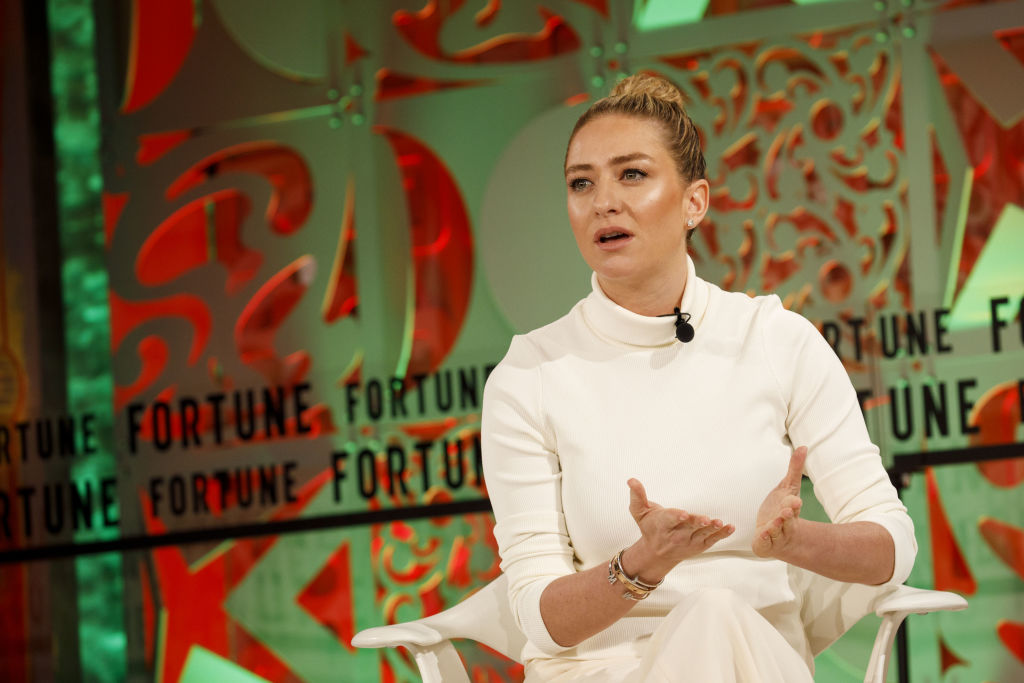 Good morning, Broadsheet readers! The Biden-Harris inauguration is in one day, a mask brand carves out a niche in a crowded market, and Bumble is going public. Have a mindful Tuesday.

– IPO buzz. Just two weeks ago, we highlighted the disappointing trend among U.S. IPOs: Of the hundreds of companies that have gone public in the United States over the years, all but 20 or so were founded and led by men.

At least one IPO in 2021 will run counter to the spirit of that phenomenon: Bumble’s.

The company behind the female-centric dating app founded by Whitney Wolfe Herd in 2014 filed to go public on Friday. It’s expected to debut—fittingly—around Valentine’s Day.

Wolfe Herd’s startup story has captured tons of media attention. She started her career at dating app Tinder but sued the company over sexual harassment and discrimination claims. The parties settled the claims with no admission of wrongdoing shortly before Wolfe Herd launched Bumble.

Bumble faced its own allegations of misconduct in July 2019, when former employees accused Andrey Andreev, then Bumble’s majority owner, of fostering a toxic workplace. Andreev said “many of the accusations are inaccurate” but that he was taking them “seriously.” He later sold his stake in the company. Wolfe Herd said she stood by Andreev and had never witnessed inappropriate behavior, but said she would “never challenge someone’s feelings or experiences.”

The 2019 claims put Wolfe Herd in a tight spot because Bumble has been so consistently female-forward. Wolfe Herd founded the app, she wrote in a letter to investors in Bumble’s S-1, on the idea that women should be able to make the first move in a romantic relationship “without fear and judgment,” and that encouraging them to do so would help upend the traditional, unhealthy dating dynamic that “disempowered women and created unnecessary pressure for men.”

Bumble’s commitment to female empowerment and women’s safety has reached beyond digital match-making. In 2019, Wolfe Herd and Bumble backed a Texas law that criminalized the unsolicited sharing of nude images and Bumble launched a tool that automatically blurs lewd photos sent on the app.

The brand’s approach has resonated with users. It reports having 42.1 million monthly active users as of the end of September and could seek a valuation of between $6 billion and $8 billion, according to Bloomberg. It reported a net loss of $84 million on revenue of $376 million between Jan. 29 and Sept. 30 last year.

Bumble’s IPO stands out for a few more reasons. At 31, Wolfe Herd will be one of the youngest female CEOs to take her company public. And Bumble is expected to list on the Nasdaq with a board that’s 73% female, a stark counterpoint to all the firms that go public with boards that are made up mostly—if not entirely—of men.

- Inauguration line-up. The roster of women taking part in Wednesday's inauguration is growing. Vanderbilt kicker Sarah Fuller, the first woman to score in a Power Five conference football game, says she's accepted an invitation to participate. Amanda Gorman, 22, will be the youngest inaugural poet when she recites "The Hill We Climb," and actresses Eva Longoria and Kerry Washington will introduce different segments of the ceremony. Meanwhile, Vice President-elect Kamala Harris has picked Justice Sonia Sotomayor to swear her into office; she'll do so on two Bibles, one of which belonged to Thurgood Marshall, the first Black Supreme Court justice.

- A 'collective' failure. A World Health Organization panel has issued a damning report on how governments and public health organizations were slow and ineffective in responding to the COVID-19 pandemic. The panel, led by Helen Clark, a former prime minister of New Zealand, and Ellen Johnson Sirleaf, a former president of Liberia, also cited the WHO's own shortcomings in its response to the crisis. New York Times

- See you in court. President Donald Trump will face a deluge of legal actions once he leaves office and resumes life as private citizen. Chief among them is a trio of lawsuits that allege defamation and fraud, all of them helmed by attorney Roberta Kaplan. “I became the go-to person to sue the president,” she says. Washington Post

- Mets #MeToo. New York Mets' new GM Jared Porter is under fire after ESPN reported that he texted lewd images to a foreign female reporter in 2016, when he worked for the Chicago Cubs. Porter claimed the obscene photos were "kinda like joke-stock images" before declining to comment further. The Mets president Sandy Alderson says the team is "reviewing the facts regarding this serious issue." The reporter, who initially declined to go public with her story, now says her priority is to "prevent this from happening to someone else." ESPN

- Mask up. In the now-crowded COVID-19 face-covering market, Cynthia Sakai's Evolvetogether brand stands out as the only consumer-facing FDA-approved medical mask. Her privately-funded firm with 11 employees has a waiting list of 40,000 people and expects to produce more than 16 million masks annually. Fortune

- Front row seat. Elle interviewed 23 women reporters—New York Times' Maggie Haberman, New Yorker's Jane Mayer, TheGrio's April Ryan—to compile a sort of oral history of what it was like to cover President Donald Trump and what it felt like when the female journalists became part of the story. Elle

- See you on Zoom. Organizations representing Black women, like Alpha Kappa Alpha Sorority Inc., had planned to ring in Vice President-elect Kamala Harris's historic swearing-in on Wednesday with great fanfare, but the tight security around the inauguration—not to mention the pandemic—has forced the groups to celebrate with less pomp. Wall Street Journal

Kristalina Georgieva: ‘We are in a resilient place but cannot take stability for granted’ Financial Times

Can a ‘guaranteed income’ for Black entrepreneurs narrow the wealth gap? Bloomberg

-Jemele Hill, the journalist who's said 'yes' to a lot lately, including a memoir due out this year and a new podcast network at Spotify that will elevate Black women