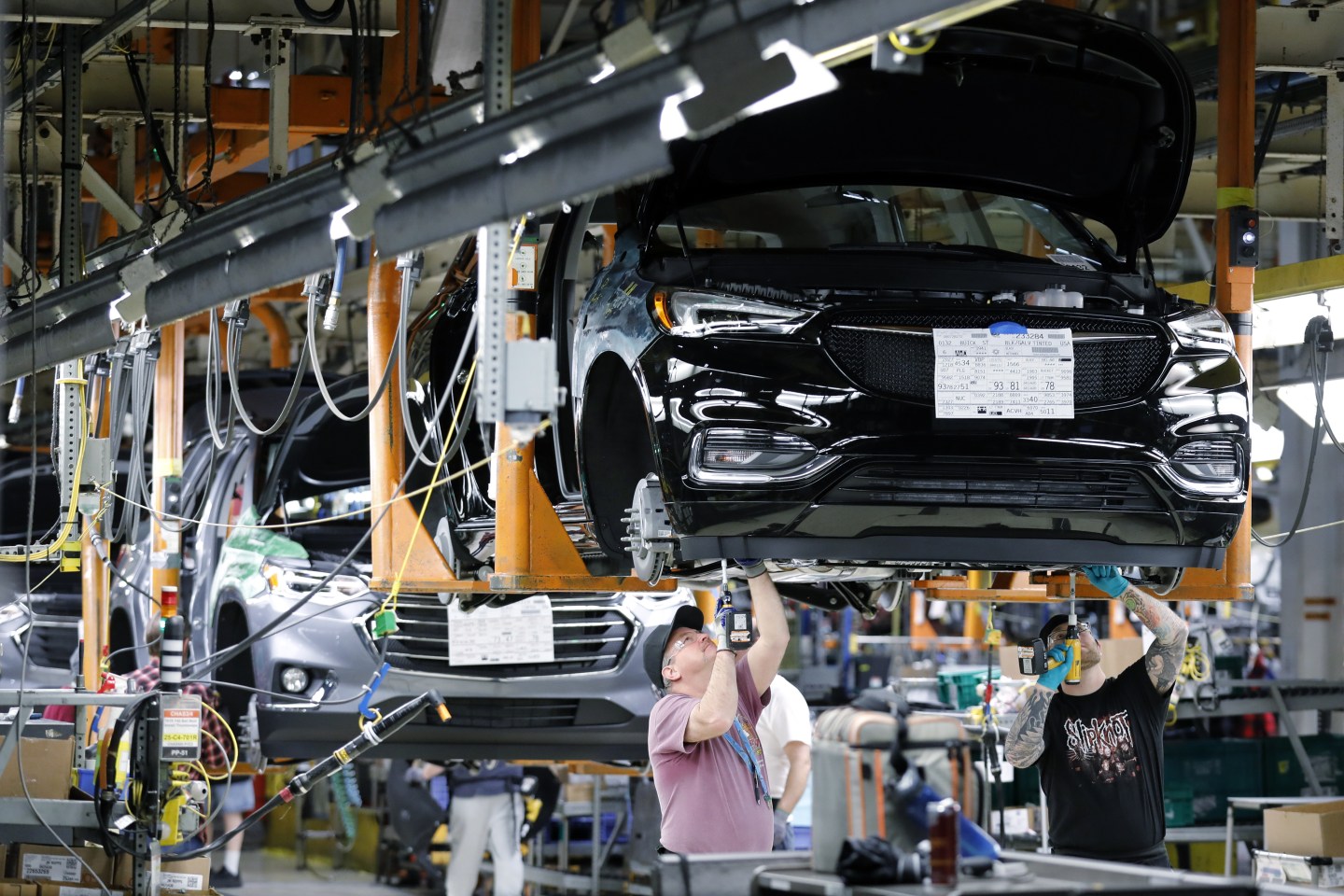 Employees install components on a General Motors vehicle at a factory in Lansing. Enforcing fair trade rules in the auto industry and many others is “a straightforward, bipartisan way to create and protect American jobs,” writes Jim McCrery.
(Photographer: Jeff Kowalsky/Bloomberg via Getty Images)

The new Congress is convening this month as divided as it’s ever been. Democrats control both the House and Senate, but by the narrowest of margins—so they’ll need support from their Republican counterparts to strike grand bargains on divisive issues like health care or immigration reform.

Luckily, bipartisanship isn’t entirely dead. Leaders of both parties signaled during the campaign that they will prioritize fair trade. And that’s great news for American workers. Enforcing our existing trade deals more stringently would create new jobs, boost wages, and generate more economic growth at a time when our country is still reeling from the pandemic.

The new Congress can achieve this easy bipartisan victory by working with the incoming Biden administration to ensure that other countries play by the rules and respect American innovations and intellectual property.

Americans benefit enormously from international trade. Forty million U.S. jobs depend on it, according to a new study from the Business Roundtable. And those are solid middle-class jobs, too. In the manufacturing industry, employees in the most trade-intensive sectors make nearly $95,000 per year, on average, compared with only $61,000 for the least trade-intensive. And 98% of U.S. exporters are small or medium-size businesses.

Consider just a few of the most egregious and unfair trade practices.

Brazil imposes higher taxes on Hollywood films than domestically produced movies, and it also restricts American companies’ abilities to patent their medicines. Indian officials often refuse to enforce patents in their country, enabling domestic companies to create knockoff versions of patented medicines produced at enormous expense by American scientists. The government-run health care systems in Japan, Canada, Korea, and the United Kingdom refuse to pay market prices for American medicines, leaving it to the United States and its consumers to shoulder the financial burden of global biopharmaceutical R&D.

It’s up to both Congress and the administration to enforce our trade laws and agreements. While Congress has given the U.S. Trade Representative—under the direction of the President—the authority to negotiate new trade deals, Congress also has made clear that it expects those deals to be enforced.

Both Democratic and Republican members of Congress are eager for the United States to exercise this responsibility. Consider the recent USMCA trade agreement with Mexico and Canada. Sen. Ron Wyden (D-Ore.) recently sent a letter to President Trump, lamenting that his administration has failed to enforce provisions that give American dairy farmers, auto parts manufacturers, and biotech manufacturers access to the Canadian and Mexican markets. Sen. John Cornyn (R-Texas) sent a similar letter to the President highlighting concerns over energy products.

The United States also must improve our trade enforcement with Asian allies. For starters, it should demand that the Korean government offer fairer reimbursements for pharmaceuticals. Through agreements made with both the Trump and Obama administrations, South Korea has already agreed to do this, but so far, it has not followed through. In further negotiations for a U.S.-Japan trade agreement, the United States should insist that Japan change its discriminatory testing protocols—like its failure to accept U.S. safety standards—that protect the Japanese auto industry from foreign competition. That would help American auto and auto parts manufacturers expand into the Japanese market.

Americans want trade enforcement. Nearly three-quarters say increasing U.S. exports is good for economic growth, according to a Gallup poll, but over 80% say further trade enforcement is necessary to make sure our trading partners value our innovative products.

Making trade enforcement a top priority should be a no-brainer for the new Congress and the new administration. It’s a straightforward, bipartisan way to create and protect American jobs.

Jim McCrery represented Louisiana in the U.S. House of Representatives from 1988 to 2009 and was the ranking Republican on the House Ways and Means Committee from 2007 to 2008.