How A.I. can speed up the COVID-19 vaccination drive 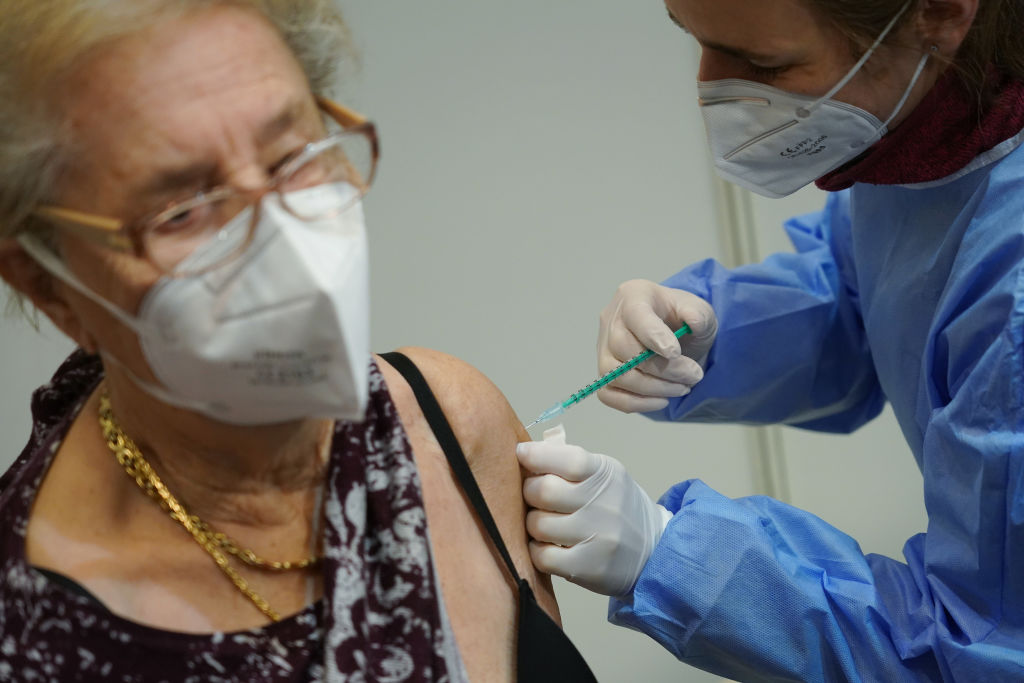 A.I. might help figure out the best locations for vaccination centers, such as this one in Potsdam, Germany, where a woman receives a Covid-19 immunization.
Sean Gallup—Pool/Getty Images

Happy New Year everyone! A warm welcome back too to my Fortune “Eye on A.I.” partner Jonathan Vanian, who has just returned from paternity leave. Jonathan helped compile the news items, research, and Brain Food sections for this week’s newsletter.

I spent some time over the last few weeks reporting a story, which will be published soon, on how companies hope to use A.I. to help the COVID-19 vaccination drive. The global vaccine rollout, which is now underway, although progressing much more slowly than most would like, will be among the most important stories this year and it is one in which A.I. may play a role in at least four distinct areas:

•˘Triage and impact modeling. Figuring out which population groups should be vaccinated in which order to end the pandemic quickly.
•Demand forecasting. Determining where and when to ship doses to get as many people inoculated in the least amount of time.
•Supply chain management. Monitoring the vaccine production and delivery network for bottlenecks.
•Post-vaccination surveillance. Watching for signs of any adverse side effects from the vaccine that may not have been found during clinical trials.

Today I want to talk about just one aspect of this: demand forecasting. In my reporting, I spoke to Benjamin Fels, who is the co-founder and chief executive of a small company in Seattle called Macro-Eyes. Fels is an intriguing character. With pale skin, piercing blue eyes, a receding hairline and a bushy, black beard, he reminded me of a 19th century missionary. And he is on a mission of sorts. His goal: to improve healthcare, especially for those in low and middle-income countries.

Fels first came across machine learning while working at a hedge fund in Chicago and London. He was intrigued by the idea that an A.I. system could be fed many disparate datasets, and, by sniffing out a few faint signals in each of them, piece together robust predictions that traders could use to make money in the financial markets.

But Fels didn’t want to just do well. He wanted to do good. And he wondered what else the powerful machine-learning systems he was using may be able to do if applied to different kinds of data. “There must be, I naively thought, other domains where this is important,” he says.

He teamed up with Suvrit Sra, an MIT computer scientist, and together the two decided to tackle healthcare. “Our basic hypothesis was that healthcare, the practice of medicine, the whole issue of how you deliver healthcare, is an extended act of pattern recognition,” Fels says.

Their first customer after founding Macro-Eyes was Stanford University’s health system. Like many healthcare practices, one of Stanford’s biggest problems was no shows—patients who didn’t turn up for appointments. Macro-Eyes built a system that could reliably predict which patients were likely to miss appointments. Critically, it could also suggest alternative times and clinic locations that would increase the odds that a patient would show up.

The company has since applied similar technology in locations from Arkansas to Nigeria, with support from the U.S. Agency for International Development and the Bill & Melinda Gates Foundation, among others. “We’ve gotten very good at predicting health seeking behaviors,” Fels says.

So what does this have to do with the COVID-19 vaccine? Well, in Tanzania, Macro-Eyes worked on a project to improve childhood immunization rates. Its software analyzed how many vaccine doses to send to each vaccination center. Critically, it also sussed out which families might be reluctant to inoculate their children but could be persuaded with the right message and an immunization center located in a convenient place. Using the software, the Tanzanian government was able to improve the efficiency of its vaccination program by 96% and reduce wasted vaccine doses to 2.42 per 100.

The lessons of Macro-Eyes in Tanzania are directly applicable to the COVID-19 vaccination effort, Fels says. Ensuring the efficiency of that vaccination program is essential because demand is likely to outstrip supply globally for some time and, particularly in low-income countries, each dose will be precious. Concerns about cold storage will be an issue in many places, even with vaccines such as AstraZeneca’s that can be kept at normal refrigerator temperatures. “We can’t afford to throw away 30 doses because we sent them to wrong place,” Fels says. “But if we allocate the vaccine strictly according to population we are going to severely under-allocate to some sites and severely over-allocate to others.”

To figure out demand, he says, Macro-Eye’s A.I. software looks at data sets that include geospatial data, especially satellite imagery, information on the number of mobile phone users in a given area, government and health system records if they are available, and sometimes even social media posts.

The company is used to having to get creative about the data it uses. In Sierra Leone, which lacked health data, the company had to figure out how to correlate information about local school infrastructure to make predictions about the quality of local health centers. It turned out that the teacher-pupil ratios alone were enough to predict with 70% accuracy whether the local clinic had access to clean water, Fels says. “Any one of these data sources on its own is usually of marginal value,” he says. “But if you combine them you start to get an accurate picture.”

That’s a good tip for using A.I. in business, as well as an example of A.I.’s use in the business of doing good. Let’s hope the new year brings many more. And with that, here’s the rest of this week’s A.I. news.

This story has been updated to correct the location of Macro-eyes headquarters.

Facial recognition nightmare, part 2. The Washington Post's editorial board published an opinion calling for Congress to impose a moratorium on the use of facial recognition software by law enforcement, following the Times story about the arrest of Nijeer Parks. The authors write: Black Americans are already disproportionately policed and punished. Scanning mugshot databases for similar faces to a suspect’s reinforces this trend—especially because many systems return results no matter whether there’s a high-confidence match.

Bet the energy farm. The National Grid, via its investment arm National Grid Partners, has invested in 16 startups specializing in machine learning, TechCrunch reported. The report said that the National Grid has so far invested about $135 million out of $175 million in companies using machine learning in some form. National Grid Partners founder and president Lisa Lambert told the publication that utility companies are looking to modernize their businesses, saying “Today, most companies have everything written down in manuals; as an industry, we basically still run our networks off spreadsheets, and the skills and experience of the people who run the networks.”

Chipmakers need the cash. Graphcore, a startup specializing in A.I. chips, has raised $222 million in funding from investors like the Ontario Teachers’ Pensions Plan Board and funds managed by Fidelity International and Schroders. The funding underscores how investors are excited about the possibility of new companies creating the next-generation computer chips that power various deep learning related task. Graphcore CEO Nigel Toon told TechCrunch that it may be "premature" to call the latest funding a "pre-IPO" round.

First there was was the Roomba. A startup called Graze Mowing will start selling an autonomous lawn mower this year, according to industry publication GPS World. But these lawnmowers, outfitted with similar hardware used to power self-driving cars, are geared for “mid- to large-sized commercial lawns, “ so you won’t be using these for your front yard anytime soon. From the article: Machine learning, coupled with computer vision and a robust system of sensors, allows the new Graze commercial mower to map job sites, plan and execute mowing paths, and avoid obstacles and dangerous inclines while continuously collecting and apply data to further improve aesthetic quality and efficiency.

Agricultural chemical company Corteva hired Sam Eathington to be its senior vice president and chief technology officer. Eathington was previously the chief science officer at The Climate Corporation, which is part of Bayer Crop Science.

Fundraising startup Snap! Raise picked Stuart Silberg as CTO. Silberg was once the CTO of Expedia Group and was more recently a CTO of A Place for Mom, a senior living advisory service.

Cognizant, the technology consulting firm, said it has appointed Ursula Morgenstern as its new president of global markets growth and a member of its executive committee. She was previously head of Central Europe for technology company Atos. Cognizant also announced that Rob Walker will be its new managing director for the U.K. & Ireland. Walker was formerly U.K. & Ireland consulting lead for Ernst & Young U.K.

It may be a LOng shot. Ryan Khurana, is a research fellow at the Montreal AI Ethics Institute, explores in Scientific American the hope behind the machine-learning technique of "less-than-one" shot learning, or LO-shot learning, to make it possible to train deep learning models using less data and computing resources than current methods. Citing research from University of Waterloo, Khurana wrote that with the technique, it could be possible to create deep-learning systems that can "learn about objects in the world without being fed an example of each one."

In their latest paper, the team has extended this principle to show that, theoretically, LO-shot techniques allow AIs to potentially learn to distinguish thousands of objects given a small data set of even two examples. This is a great improvement on traditional deep-learning systems, in which the demand for data grows exponentially with the need to distinguish more objects.

Marketers can’t predict what you’ll buy—even if they use A.I. —By David Gal

Trump hyped Verily’s coronavirus testing tool. It led to less than 1% of all tests in 2020 — By Danielle Abril

When A.I. bias comes to healthcare. Rachel Thomas, the founding director of the University of San Francisco’s Center for Applied Data Ethics and cofounder of fast.ai, wrote an article for the Boston Review explaining how A.I. and related dataset bias issues can creep into healthcare and the problems they can create. Indeed, Ryan Copping, Genentech’s head of analytics for personalized health care data science, recently told Fortune that bias is one of the biggest barriers holding back deep learning in healthcare, and potential bias problems pose significant problems if they go undetected.

From the Boston Review:

Domain expertise is crucial for any applied machine learning project. Radiologists working in deep learning, for example, have discovered dataset issues with incorrectly labeled chest X-rays that those without a medical background would not have recognized on their own. However, it is often assumed that for medicine, the knowledge and experience of doctors is the only domain expertise there is. This is false. While the knowledge of doctors is of course essential, patients have a set of skills and expertise that is distinct but just as essential. Patients know what they are experiencing: what it is like to feel pain, what it is like to navigate a demoralizing health care system.