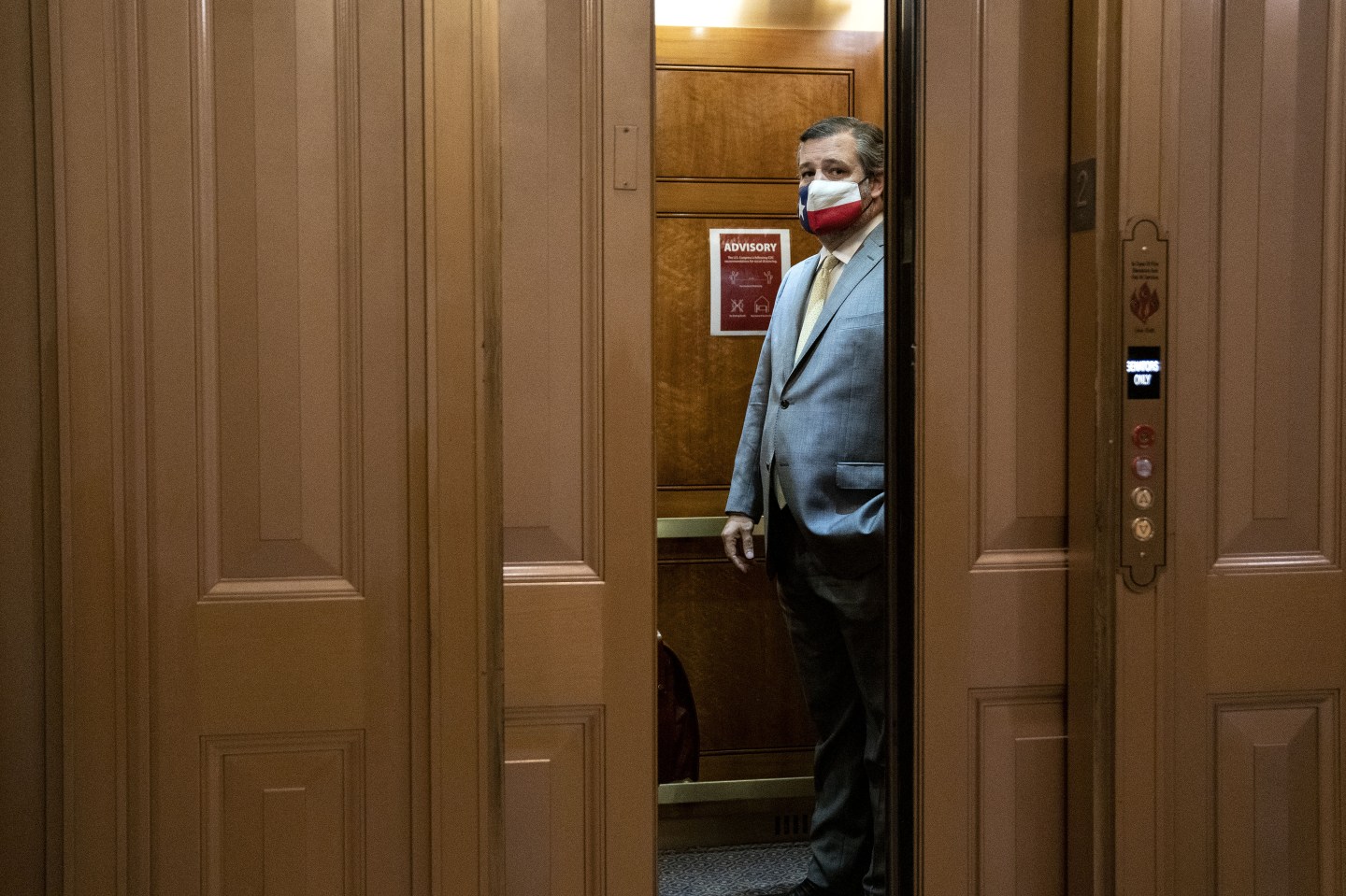 Senator Ted Cruz, a Republican from Texas, wears a protective mask in an elevator at the U.S. Capitol in Washington, D.C. on Nov. 30, 2020.
Stefani Reynolds—Bloomberg/Getty Images

A group of 11 Republican senators has pledged to oppose certification of President Donald Trump’s election loss, rejecting GOP leadership who warned against attempts to undermine the election or risk splintering the party.

At least three Republicans sharply criticized the effort, which a top Democratic senator slammed as a “publicity stunt” and “an attempt to subvert the will of the voters” that’s destined to fail. Trump egged on the plan in a series of tweets.

Congress on Jan. 6 is required by the U.S. Constitution to meet and accept the results of the Electoral College, which affirmed Democrat Joe Biden as president-elect, a gathering that is typically a formality.

Instead, Senator Ted Cruz of Texas led a group on Saturday in calling for a delay of full certification, and a 10-day investigation into accusations of wrongdoing. Those accusations have been stoked by Trump but repeatedly dismissed in court, including by Trump-appointed judges.

The creation of an investigative “electoral commission” is seen as a condition that’s all but certain to not be met, people familiar with the matter said. Without it, “we intend to vote on January 6 to reject the electors from disputed states as not ‘regularly given’ and ‘lawfully certified,’” the senators said in a written statement issued Saturday.

“Whether or not our elected officials or journalists believe it, that deep distrust of our democratic processes will not magically disappear. It should concern us all. And it poses an ongoing threat to the legitimacy of any subsequent administrations,” the group said in a joint statement.

Trump has yet to provide evidence of widespread voter fraud. Attorney General William Barr, who stepped down before Christmas, said in early December that the U.S. Justice Department had uncovered no evidence of fraud on a scale that could have changed the outcome of the election.

Congress is required to accept the results of the electoral college. On Jan. 6, both chambers will meet jointly to open and count certificates of electoral votes from the 50 states and the District of Columbia, in alphabetical order.

The process is spelled out in the U.S. legal code, right down to the Jan. 6 date and the hour — 1 p.m. — at which the joint session begins. The candidate who reaches 270 electoral votes is the winner. During the session — which will be presided over by Vice President Mike Pence — any member may object to the results from any individual state.

If both a senator and a representative object to a state’s result, the two chambers leave the joint session to debate the objection for up to two hours and then vote on it. Members can object to as many states as they wish but the debate is only triggered if lawmakers from both chambers sign on.

The vice president’s office has signaled an openness to hearing objections, but steered clear of endorsing the tactics laid out on Saturday.

Pence “welcomes the efforts of members of the House and Senate to use the authority they have under the law to raise objections and bring forward evidence before the Congress and the American people on January 6,” chief of staff Marc Short said in a statement.

Senator Amy Klobuchar of Minnesota, the top Democrat on the Senate rules committee, said the Republican “publicity stunt” wouldn’t prevent Biden from being inaugurated on Jan. 20.

“Every single state in America has certified its election results and that includes by Republican secretaries of state and governors,” Klobuchar said in a statement.

The demand for “an additional federal ‘commission’ to supersede state certifications when the votes have already been counted, recounted, litigated, and state-certified, amounts to nothing more than an attempt to subvert the will of the voters,” Klobuchar said.

Three Republican senators on Saturday rejected the efforts of their colleagues.

“The egregious ploy to reject electors may enhance the political ambition of some, but dangerously threatens our Democratic Republic,” Utah’s Mitt Romney said in a statement.

Courts and legislatures have found nothing to warrant overturning the results, and “I urge my colleagues from both parties to recognize this and to join me in maintaining confidence in the Electoral College and our elections,” Lisa Murkowski of Alaska said in a statement posted on Twitter.

Pat Toomey of Pennsylvania, who’s announced he won’t seek re-election in 2022, said “allegations of fraud by a losing campaign cannot justify overturning an election.” He said the effort by Cruz, Senator Josh Hawley and others “directly undermines” the right of Americans to elect their own leaders.

Romney and Toomey also referenced the conclusions by Barr and an array of judges in battleground states who found allegations of widespread election fraud to be unsupported.

Another GOP Senator, Ben Sasse of Nebraska, wrote last week that Trump and his allies were “playing with fire” to question the results of the election without offering evidence of widespread voter fraud.

Hawley of Missouri has already said he’ll object, teeing up a lengthy process on Jan. 6 that’s unlikely to stop the results but may fracture the GOP.

John Thune, the Senate’s No. 2 Republican, said last week that attempts to object to the electoral count would “go down like a shot dog in the Senate.” He advised GOP lawmakers who plan to take part in such an effort to reconsider.

Trump responded by urging someone — for example, South Dakota Governor Kristi Noem — to launch a primary challenge against Thune in 2022. Noem has said she’ll seek another term as governor.